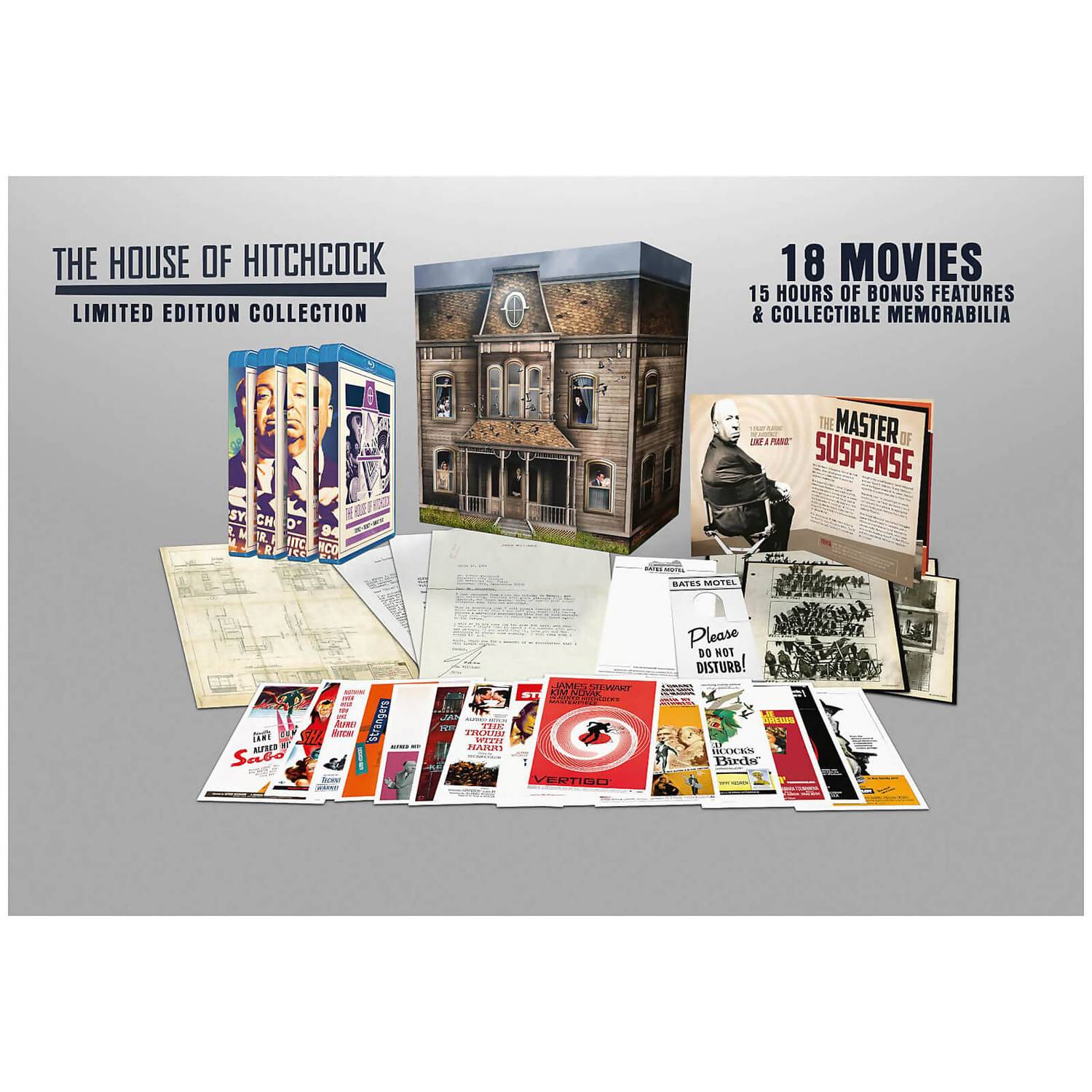 Universally recognised as the Master of Suspense, the legendary Alfred Hitchcock directed some of cinema’s most thrilling and unforgettable classics. The House of Hitchcock features 18 iconic films from the acclaimed director’s illustrious career including Psycho, The Birds, Rear Window, Vertigo and North by Northwest, plus a range of limited edition extras including blueprints of the infamous Psycho House, original storyboards from some of his finest movies, movie poster artcards for all the films, and a booklet about the man himself.

Universally recognised as the Master of Suspense, the legendary Alfred Hitchcock directed some of cinema’s most thrilling and unforgettable classics. The House of Hitchcock features 18 iconic films from the acclaimed director’s illustrious career including Psycho, The Birds, Rear Window, Vertigo and North by Northwest, plus a range of limited edition extras including blueprints of the infamous Psycho House, original storyboards from some of his finest movies, movie poster artcards for all the films, and a booklet about the man himself.

I bought this for my wife and she absolutely loved it. She is a big Hitchcock fan. The blue ray discs are stacked with loads of extras and the additional material received, original film posters of the films on postcards, sketches etc are fabulous. A wonderful purchase for any Hitchcock fans.

We All Go a Little Mad Sometimes

Over a career spanning five decades, Alfred Hitchcock has redefined what a mainstream film can be, taking risks by spending big budgets on films, not intended to dazzle its audience via spectacle, but do something much more impressive, frighten them. This is a very impressive collection. The UK version has not so much additional features (which it more than substitutes with 3 or 4 more films I believe) however there are still some noteworthy extras, most notably an episode of 'Alfred Hitchcock Presents' called 'Lamb to the Slaughter' which is available on the 'Psycho' disk. unlike the international version, this is the only episode available on the UK version. Also there are some physical supplements that this box comes with, some very good ones (a miniature poster for all 18 films, original storyboards for 'The Birds,' blueprints for the house from 'Psycho' & a collection of letters addressed to Hitch involving the production of his films), as well as some childlike gimmicky ones (A do not disturb sign to put on your door an well as a notebook, both a replica of one that would have been used in 'Psycho'), however even the latter of the ones that I have mentioned have their charms. The films themselves are classics, and it is nice to see a studio financed (Non-Criterion, Masters of Cinema, etc.) boxsets with so many lesser known, but some equally brilliant works. I will admit that the main drawback of the set is that some of the restorations are a bit off, with noticeable artifacts on quite a few of the earlier films, and some color grading issues with 'Rope,' unfortunately one of my favorites. However they are easily ignored due to the strength of most of the films like 'Shadow of a Doubt' and 'Strangers on a Train,' even some of his lesser works like 'Saboteur' are thoroughly entertaining and keep the viewer engaged throughout. The only notably bad film that did not entertain in any way is his overrated 'The Birds,' however most agree the film to be a classic so I am in the minority. I was thoroughly entertained with this box and enjoyed the variety of extras as well as the films a lot. My small issues mentioned above are nothing compared to the enjoyment found in most of these masterworks.

Found the box set at Zavvi significantly cheaper than elsewhere. Arrived on time in the kind of sturdy packaging required for such a set. The set itself awesome. The movies are great, obviously, but the swag that comes with it, lobby cards, posters etc are out of this world.

This went on sale and I had to grab it. The box itself but also the collection of films and memorabilia is fantastic.

The Master of suspense!

Excellent quality, a must for Hitchcock fans! Really liked the layout & movie memorabilia included. Only 1 negative, as it’s a remaster, I bought this collection expecting more of the movies to be stretched to widescreen, as I read another review on a different site explaining the films that are full screen. But alas most are not, doesn’t spoil the overall experience, but would be nice to find a complete collection without 1/3 of the picture being in black!

What not to love about this, a true collectors piece, a must have for any Hitchcock fan

Beautifully presented Box Set with LOTS of amazing memorbilia, absolute treat to open. It looks really nice in my horror collection. It was sent in a cardbox box too so the edges were perfect on arrival - I was relieved as I'm quite particular about the appearance being a big Collector. If you love Hitchcock - you need to buy this. You won't regret it & it's well worth the money, seriously.

Most economical way to own Hitchcock on bluray

This set containing 18 films, while not the complete set of Hitchcock films, is probably the most complete we'll get on Blu-ray (unless an anniversary pops up.) I don't think 4k editions will ever be released in such a fashion since too much money goes into production and too much is earned from selling individually. Makes this set all the more worthwhile.

18 fantastic movies, not 15 like the US version. The Birds is my favourite movie of all time and it is just one of the classic Hitchock films in this stellar collection. I met Tippi Hedren and sailed with Kim Novak and Eva Marie Saint on Turner Classic Movies cruises and they were my favourite Hitchock blondes, all featured in the must-have collection.

Great edition. All must have Hitchock movies in one place.