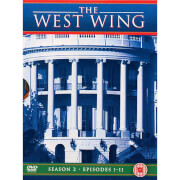 Follow the trials and tribulations of the Bartlet administration in this monolith of a box set featuring 43 discs and all 154 episodes of the critically acclaimed US political drama. Packed with an awesome array of special features this is one the hard core fans won't be able to resist!

Follow the trials and tribulations of the Bartlet administration in this monolith of a box set featuring 43 discs and all 154 episodes of the critically acclaimed US political drama. Packed with an awesome array of special features this is one the hard core fans won't be able to resist!

Just what I needed

This series has a good balance between credibility and interest. It mostly qualifies for being family entertainment. As a non American, I wondered if I would be able to follow or be interested, but I find both are true. I gave it 5 stars because I needed a bit of relaxed escapism after a bereavement and it did the job! It also generally respects wholesome values while remaining enjoyable! And the acting is excellent.

It's all here! One of the best series ever broadcast

I enjoyed the West Wing when it was transmitted - though I came to it in the third season. I enjoyed the first four years during Sorkin's reign - and I also found much to enjoy afterwards. I don't buy all of Sorkin's political views - and sometimes he's a little too happy to have his characters destroy a straw man rather than engage in the real arguments. But at it's best, probably Sorkin's best - we get great drama, engaging and inspirational characters and the chance to stop and think about things along the way. If every president aspired to be a little more like President Bartlett on his better days - we'd all be a little better off! I watch it with my 12-year-old daughter, and we have some interesting discussions along the way. This release is great. I've not watched many episodes yet - but it's the same as the individually released seasons - just in a nice box and at a very reasonable price. Happy days! :)

The acting is great. The story line is most believable. Subsequent series involving the White House do not come close to the quality the West Wing series.

The best TV series ever

Just started to watch series 1, all I love about programmes, intrigue, politics, jealousy, love affairs, surrounding the Presendent of the United States, has had me looking to the next episode.

One of the best series ever!

This item arrived in record time well wrapped and in pristine condition.The contents are superb and show exactly why this won so many accolades.........

Intelligent series set in Americas presidential residence. Involves White House staff and the president and interaction with other countries and their presidents and prime ministers. Very thought provoking and interesting with lots of high action and personal situations. Always wanting to watch the next in the series. Would highly recommend.

I bought the complete box of "The West Wing" without knowing the series before. I was so positively surprised! Great language and excellent dialogues that are most often witty. Still rather easy to understand even for me as a non-English-native-speaker. Dialogues and stories occur at extremely high speed, as there are multiple things going on in the White House 24/7. The political stories are rather sophisticated at least for me as a non-American. But I had even more fun learning (and a bit reading) more about how an American government works. From the very first episode on all the main characters are shown in such depth - you easily fall for every single one of them with his/her own specific characteristics. It's just so much fun!