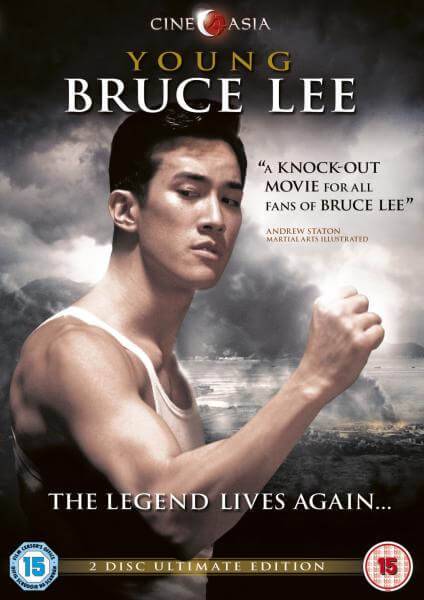 Now, discover his amazing untold story in this stunning biopic from the studio that brought you Jet Li's Warlords and the acclaimed Infernal Affairs Trilogy. From his birth on November 27th 1940, discover how Bruce Lee lived through war and persecution and survived the brutal street-gangs of 1950's Hong Kong before going on to live his dreams. Showcasing an incredible hi-impact tribute to the celebrated Coliseum fight from Way of the Dragon, Young Bruce Lee is an inspirational motion picture event that is not to be missed!

Now, discover his amazing untold story in this stunning biopic from the studio that brought you Jet Li's Warlords and the acclaimed Infernal Affairs Trilogy. From his birth on November 27th 1940, discover how Bruce Lee lived through war and persecution and survived the brutal street-gangs of 1950's Hong Kong before going on to live his dreams. Showcasing an incredible hi-impact tribute to the celebrated Coliseum fight from Way of the Dragon, Young Bruce Lee is an inspirational motion picture event that is not to be missed!

Young Bruce Lee takes us back to the early days of a martial arts legend, seen through the eyes of his younger brother Robert. Robert Lee participated in the production of the film, which focuses primarily not on the fighting, but on the Lee family growing up. Produced by Manfred Wong (The Storm Riders) who also co-directed with Raymond Yip, Young Bruce Lee casts Aarif Lee as the legend-to-be. Aarif is no stranger to success either, having taken home the Hong Kong Film Award for Best New Performer for his scene-stealing debut in the period drama Echoes of the Rainbow. He is joined by the likes of Tony Leung, Christy Chung, and Jennifer Tse (Nicholas Tse's sister) appearing in her big screen debut. Bruce Lee was still a baby when his famous father, Cantonese opera artist Lee Hoi Chuen (Tony Leung), took their family back to Hong Kong in order to live near his mother (Lee Heung Kam) and sister (Michelle Ye). Bruce’s movie career started earlier than most people realise, and he made several appearances as a child actor, the first of which being The Kid at just nine years of age. His connection to cinema led to romance with both Man Yee (Jennifer Tse) and Man Lan (Gong Mi), daughters of well-known stars in Asian cinema. These events are depicted at great length in Young Bruce Lee, so anyone expecting a kick-ass tribute has got a lot of waiting to do. The first fight sequence takes place over 70 minutes into the film, before that we are witness to layers of drama and sentiment, and several ‘key moments’ that shaped the future of action cinema. The young Bruce hangs out with his friends, wins a dance competition, falls in love with the wrong girl, gets into fights we don’t actually see, and stars in several home grown movies. As a human drama it works really well, up to point. The only problem being that most people are expecting a human drama based on the life of Bruce Lee. In all honesty - if you weren’t already aware of the legend that is - you’d be hard pushed to find any evidence of it here. I was hoping to discover what made the man tick, an indication as to what drove Bruce to physical perfection, an insight into the man behind the myth - I wasn’t expecting to see school boy crushes and well choreographed dance sequences. The cinematography is splendid, as are most of the performances, but the insights we’re longing for are strangely absent. Bruce's real passion, other than girls walking in slow-mo, was of course martial arts. His time studying Wing Chun under the tutelage of Master Ip Man is well documented - but not so here. It’s hard to imagine a year going by these days without a cinematic depiction of Ip Man, such is the influence he had on the world of martial arts, but in Young Bruce Lee we don’t even get to see his face - Donnie must’ve been waxing his chest that day. We do catch a glimpse of him in a photograph but that’s about it, then its back to the soap-style romance and family domestics. An attempt to add excitement arrives in the final act, with the introduction of British boxing champion Charlie Owen (Alex Yen), not to mention run-ins with drug dealers and evil henchmen. Charlie’s arrival is what prompts Bruce to visit Ip Man, but it’s not until he steps inside the ring that things step up a gear - from an action junkie’s point of view at least. The fight scenes are choreographed incredibly well, adding a touch of much needed flair to proceedings. Aarif Lee copes well enough with the heavy burden of portraying a cinematic legend, but its the scenes outside the ring in which he convinces most. Quite how much we can take from this depiction of Bruce’s early years is unclear, because the final act does come on like every other martial arts movie ever made. Bruce takes on the evil foreigners and battles with drug dealers in order to save his friend, which is all very enjoyable from a predictable standpoint, even though I’m not convinced that events ring entirely true. The action sequences are pleasant enough, but it’s the lack of true insight that hits the hardest. Young Bruce Lee is a well-intentioned drama that works best if you ignore its main star. If you’re looking for an insight into the mind of an action icon, you’ve come to the wrong place. If you’re looking for a quaint period piece with action undertones you’re in for a great night. Young Bruce Lee is a wasted opportunity to show the true face of a fighting legend, and if a sequel surfaces in which he takes on the Russians - I’m out of here.

Having watched all of Bruce Lee's films when I was younger, I found this incredibly interested and led me to want to watch the original Bruce Lee films again.