THE BIG WEEKEND IS HERE - TAKE ADVANTAGE OF THESE MASSIVE SAVINGS BEFORE IT'S TO LATE! 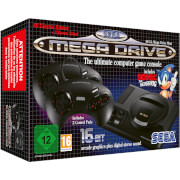 Developed by Tokyo-based tri-Ace Inc., Resonance Of Fate redefines the RPG genre with a unique storyline, highly stylised graphics, and an emphasis on realistic gunplay and engrossing action. Players will be immersed in a gritty, highly mechanised world unlike any other. With Hollywood-style action sequences, customisable weapons, and memorable characters, Resonance Of Fate takes players far beyond the boundaries of the typical RPG.

Developed by Tokyo-based tri-Ace Inc., Resonance Of Fate redefines the RPG genre with a unique storyline, highly stylised graphics, and an emphasis on realistic gunplay and engrossing action. Players will be immersed in a gritty, highly mechanised world unlike any other. With Hollywood-style action sequences, customisable weapons, and memorable characters, Resonance Of Fate takes players far beyond the boundaries of the typical RPG.

Resonance Of Fate is a unique game. As we know the most innovative aspect of this game is its battle system. It is a fairly complex system when you start but if you put the time in, it can be handled perfectly. Even so, to be a true master of Resonance Of Fate, you also have to use the stage to your advantage and this is a tactic you need to use on bosses. On the other hand`, the excellent graphics in this game will enable you to dive into a complex story and the complex psychology of the protagonists. Music is the weakest part of this title, being suppressed by the voices of the characters and shootings. In short, Resonance Of Fate is a game that by its complex history, unique combat system and excellent graphics, is a must in any home with an Xbox 360.

RPG of the Year

Resonance of Fate is by far the best RPG I've played for years. It Reminds me of old Final Fantasy even though it's very different and more difficult. The main quality of this game is the fight system: very deep, technical and enjoyable. If FFXIII disappointed you, Resonance of Fate will be a good challenge for you.

Resonance of Fate is one of the most difficult RPG games I have played in years, but that in itself is kind of good. There's no baby-sitting in this game - expect to die a good few times when first starting out, but once you get the flow of the unique battle system, you will be amazed at how fluid it can be. There's a good story and the graphics are nice. It's definitely an RPG for the hardcore gamers out there!

Resonance of Faith is the newest IP from the well known tri-Ace studio, and once again they deliver an thrilling adventure packed with both action, humour and stunning graphics. The game resolves around three characters, Vashyron, Leanne and Zephyr. Vashyron the obvious leader of the gruop, by age and maturity. He makes the major decisions and watches over the other members much like a big brother over his younger siblings. Leanne is the cute, young, innocent and sometimes even childish. She's a very likeable character although impulsive and temperamental which makes for some very entertaining situations. Zephys is a split character, at times he just runs around playing with Leanne and having fun, while at others he's serious and all business, trying to act grown up while he's not. The game is a J-RPG and does offer random battles, separate battlegrounds and such. There is a well developed crafting system, by battling or buying you'll get new scraps to use and can craft anything from special ammo to weapon parts. You can also buy or find new clothings for your characters, from basic clothes down to coloured lenses and hairspray, good customisation options. You can freely choose to change the "class", change weapons and even equipment between the characters or customise the weapons for new properties and tactics. Battle is fought in a limited "arena"/area of the map, all characters will participate in combat and battle is lost if anyone is killed. Battle comes down to 2 basic damage systems, scratch and direct damage. Scratch damage deals much damage and can easily diasble limbs or enemies, but is useless unless direct damage is dealt too. The characters get a certain amount of "energy" for each round of the fight, to move and attack. Characters can freely choose between weapons and items, ammo, and such to use during battle. Attacks can even be "caged" for greater effect, but if you're hit you'll loose all charges and the energy used. Needless to say, it takes some skill and might be frustrating to learn at first, but rewarding once you got the grip of it. The graphics of this game are simply marvellous, both the design and the the level of detail. The world is detailed and rich, the characters is amazing with individual traits and looks, the animations are really good and the character gallery broad. The game is set in a steampunk inspired world, with lots of cogs and machines, which I personally found both refreshing and interesting. Over all I would say the graphics are really good The music used in this game is beautiful and the voice acting really good, a lot of feeling which makes it believable. My only complaint would be that most standard conversations are just text with some random (non related) grunt or comment from the character. I must say that although the game does not offer decisions and branching story that's effected by your action in any major way, it still got a solid replay value. When you've completed the game you can choose to play again, on a "new game plus" with a harder difficulty and better gear and enemies. Best thing is that there is a total of 10 difficulty levels, so if you're up for a challenge and want to perfect your skills, there is plenty of time :) Pros: - No classic J-RPG characters (no swords at all) - Great graphics and music - Solid replay value and entertaining story - Combat system that requires skill but rewards good players. - No need to grind for hours - Reminds me of the good old days of J-RPG in the early 90's Cons: - Minimal voice-acting for conversations with NPCs - Not the best tutorial - No map pointers for side-quests (only text in mission description) - Takes some time (trial and error) to understand all game mechanics

What an amazing game. A gameplay which offers a breath of air with it dynamic strategies. A blend of Final Fantasy and Magna Carta's gameplay. A must have for everyone like RPG.

The best J-RPG of this generation, except maybe Lost Odyssey. Innovative combat system, an interesting argument ... At first it is hard to get used to the battle system, but once you do it, it's really fun.

It is a great game, a different battle system than normal, that makes it a little difficult to adapt, but once you do it, it's fun all the way. Nice story, with its fun moments, and the new "way" of moving through the maps, makes it a whole new experience, I totally recommend it.

If you are looking for a great JRPG that offers a decent challenge and replayability, then this game is for you. The battle system will take a little time to get used to, and can get pretty dull as the game requires quite a lot of grinding, but the fun part is that it can get quite tactical against some harder enemies -definately not a button masher-. The story is your standard JRPG style, and I don't mean it in a bad way. The jokes are great and most importantly, the English voice is marvelous, this is a rare JRPG where you should absolutely play in English for the best experience. Game also offer the option to play with Japanese voice for those who prefers the original. All in all, it is a great game that anyone who is into JRPG shouldn't miss.

This game is difficult at the beginning but when you're used to it's battle system is awesome.

Great game but not perfect

If you like Eternal Sonata then you will like this game too because the battle system is similar, but the difficulty is higher in this game. Sometimes battles became boring, but don't worry 'cause you will unlock something to make it fun again.