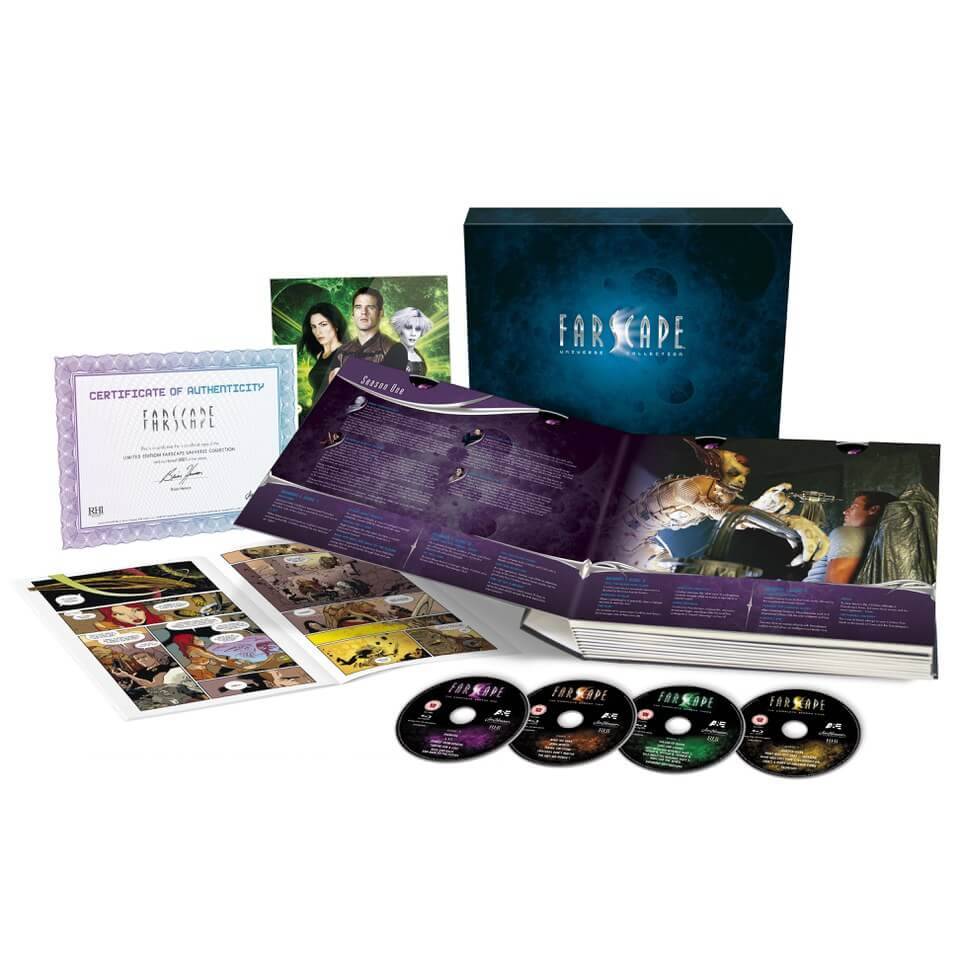 A copy of a numbered certificate signed by Brian Henson – highlighting the nature of the limited release – just 1,000 units of each format.

When American astronaut John Crichton is flung through a wormhole, he finds himself thrust deep into the midst of battle. Surrounded by hostile aliens soaring through space, John soon realises he’s lost in a galaxy far from home.

Finding refuge inside a glorious living space ship called Moya, John discovers its inhabitants are a band of alien fugitives escaping from the military forces known as the Peacekeepers. Hunted by the corrupt authorities, he allies himself with his alien fellow refugees and searches for a way home.

A copy of a numbered certificate signed by Brian Henson – highlighting the nature of the limited release – just 1,000 units of each format.

When American astronaut John Crichton is flung through a wormhole, he finds himself thrust deep into the midst of battle. Surrounded by hostile aliens soaring through space, John soon realises he’s lost in a galaxy far from home.

Finding refuge inside a glorious living space ship called Moya, John discovers its inhabitants are a band of alien fugitives escaping from the military forces known as the Peacekeepers. Hunted by the corrupt authorities, he allies himself with his alien fellow refugees and searches for a way home.

Space in your collection ??

I purchased this for my brother as he is a massive fan .(with the view to borrowing it back !) From his reaction at the time I could tell it was a winner . What with the box , the book and the art cards on top of the complete blu ray collection This is one of the nicest special editions I have ever seen and was lucky enough to get this in a special offer but even full price you get a lot for your money . If you are a collector , this is a must have !!

The Megabook is a great value for money (if you catch it on sale), containing all the episodes and even the final miniseries to finish off the story. The only downside (and I suppose a downside to only a small amount of people) is that The Peacekeeper Wars do not contain the 5.1 DTS-HD MA audio track - which, coincidentally, exists in the German BD release of PK wars. However, this version contains a lot of extras and interviews, so it kind of balances things out. Anyway, I recommend this for any true Farscape fan.

Can I not give it Six stars?

Absolutely lovely set, the presentation is fantastic, the show is genius and at that price!? A must for fans of the show and those who love sci-fi.

I'll limit my comments to the boxset itself as ypu can find reviews of the show itself (which is excellent) elsewhere. The blu rays come packed in a fantastic book with lots of glossy pictures and a full episode guide. The audio and picture quality is great. There are tons of special features including 29 commentaries, deleted scenes, bloopers and cast interviews. If you want to own Farscape, this is the way to do it.

This is a perfect purchase for any Farscape fan. A beautiful, self contained set, with the blu-rays displayed in a unique way within the book itself. From a simple perspective regarding the series, this edition comes complete with every series, including the once elusive Peacekeeper Wars, which many fans will have bought separately with other sets. The set also contains a few extras: a print, short comic book, and a certificate of authenticity signed by Jim Henson's son. All which will likely be well received by the Farscape fan in your life! A downside, if you can call it such, is that the book -being a board book and set holder - is very heavy!

Package generally very good, but reason I finally decided to buy it was the "certificate signed by Brian Henson",as I am a huge fan and decided to do away with my original DVD collection and have the whole lot in one collection. The Henson signature being the final key. What a disappointment to find the signature be badly pre printed, not an attempt to make it look original. This proved to be a big disappointment, would not have splashed out the cash if I had known. Zavvi, please be more honest with your descriptions of items in the future especially when they are exclusive to you..

Box set it self is amazing. Only complain goes to packaging, Zavvi used this "cardboard wrapper" that leaves all the corners open and my box was damaged from one corner. Can you please use proper cardboard boxes for heavy and expensive collector items like this???

I bought the standard release last year, but this is a much better product, the book presentation is superb, with character descriptions for all the major characters and the discs fit into slots at the top of the pages, indeed my only gripe is that they should have put the discs into sleeves to reduce the possibility of scratching the discs, like Japanese cd' anyway I actually bought some on Amazon and did just that. At the reduced price it's a must have for any Farscape fans worth the extra compared to the standard set available.

Both myself and girlfriend love this series and this is a great limited edition that she'll hopefully love for Xmas.

The reason why I waited.

Well if ever there was a reason I always delayed watching Farscape or put off buying the DVD's, than this is it! This exclusive Zavvi Blu-ray collection has been so lovingly put together in such a beautiful weighty Tome, that it almost defies the price tag of being less than sixty pounds! Not only that, but it arrived the day after I ordered it and amazingly - between the hours it said it would. With such an expensive looking item being so affordable and a service that treats the customer as well as the items it carefully packages with great respect, I actually feel sorry for the Farscape fans who now might miss out on this lavish edition, simply because they've already got the sad carton box versions. Incidentally, my certificate number out of a 1000, was 886, so if you've been dithering, you'd better hurry. Ultimately such things always prove to be a very good investment.