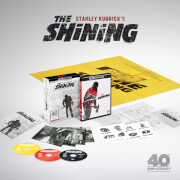 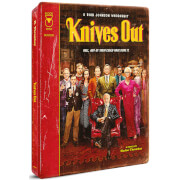 Zavvi Exclusive Steelbook with Matt Finish and Embossed Image and Title Treatment. This product is limited to 4000 copies.

Zavvi Exclusive Steelbook with Matt Finish and Embossed Image and Title Treatment. This product is limited to 4000 copies.

Full Metal Jacket is a good war movie. If you like the movie this steelbook is a must have in the collection. Looks really cool with the title and helmet embossed.

The steelbook comes in a matte finish. The front is debossed in a shape of a rectangle. The title and helmet are embossed. I love the colour black on this one. Really goes well with the colour of the helmet and bullets. Great job zavvi

This isn't about freedom, this is a slaughter

Full Metal Jacket is one of the best war movies ever made, and the best one I've seen. It doesn't have much action, but you shouldn't even notice it if you don't expect it. But instead we get interestingly made film from Kubrick, filled with questions about the morality of war and what does it do to you. But I don't feel that it tries to judge, it leaves that to you. Unfortunately the film has a drop in quality after the first 45 minutes, but that's only because the first half is incredible and the movie is worth seeing just for that part. The steelbook itself is like you'd expect from Zavvi, very well done and good looking. It has a nice black matte finish and the embossed title and helmet really pop out because of that. The disc has nice amount of extras and the picture and audio quality are great, like you'd expect from blu-ray. Even if you're not a war movie fan (I'm not), I recommend getting and watching this movie.

Probably the best war movie ever made

It is kind of funny because i am the kind of person who hates war and therefore war movies or anything related to it. I always thing it is only a excuse to make money building weapons of mass destruction, conquer countries where you can have something to gain from etc... but with Full Metal Jacket from Stanley Kubrick, it is another story on its own. Although it still shows that many of them don't know why they are there in Vietnam, it mainly shows the way they brainwash the soldiers to become machines to kill. Ronald Lee Ermey is simply exceptionnal in the role of Sergeant Hartman, I think this is probably the best role he ever played in his acting carrier. Actually most of the cast used in this movie is incredibly good and very estonishing they have not been starred in more big movies after this one. The main reasons why i liked this movie is the fact that it concentrates on the psychological side of the soldiers... another reason is the general ambiance or atmosphere with the soundtrack, really impressiv for its time. The camera angles used for certain scenes are also amazing. Now the steelbook side of things, i have a few tiny negativ points to say about it. The HD mastering although ok, could have been done better, it is quite grainy and i have seen better jobs done even though it is a 1984 movie, I wish they would do a 4k master but as long as warner owns the rights, i think we won't see it.The Sound Quality is ok but could also be better. The steelbook itselft is good, i really like the front with the embossed image and letters, the back is so so but the inside is better. The disk artwork is not good and simply copied from the older versions, so that was a bit dissapointing but that warner like we know them. All in all, don't hesitate on this movie people, it is a must have in your steelbook collection. Stanley kubrick at its best in my honest opinion and i really wish all war movies to take some spirit from this one. Enjoy!

Simple artwork, but very fitting and beautiful. If only all Kubrick's movies had a steelbook packaging! The price is very acceptable and makes this a "must have".

I am a steelbook collector and this item does not disappoint. I love the simple design that is distinctly Full Metal Jacket. I do not open the packaging so I do not have any comments about the quality of the discs or features but I am sure everything is great. I would definitely purchase this item again!

CLASSIC this top notch classic vietnam war film by the legendary stanley kubbick a real hard hitting high drama about a bunch of us marines who graduate from sum brutal training by a tough drill seargent . the story then progress to the real hardcore action of brutal war this really is a classic vietnam film a must for all war movie lovers . It comes ion a nice neat steelbook and sits proudly in my growing zavvi collection well worth a punt and agreat price as well.

One of my favourite steelbooks

As stated above, this is one of my favourite steelbooks. Has a nice solid feel to it. Overall appearance is wonderful. The front sides, title and helmet are nicely embossed. Artwork and design are very nice and minimalistic. Very pleased with it. Arrived promptly in secure packaging.

This movie is my favorite one of Stanley Kubrick's masterpieces. It does not to say about movie, regarding the greatness of this movie. Even though I had have DVD already, steelbook edition was so attractive to me. Artwork of steel book was very good, what is better, I can make sure of the consistency with other Kubrick's steel book package. As a matter of fact, I was concerned about delivery condition cause steelbook is sensitive to external shock that may happen during delivery, fortunately, in spite of international shipping, the product had not any damage. Generally, I am satisfied with this product cause I love this movie itself, just one thing, it would be much better that the more packing buffer will be used at shipping.