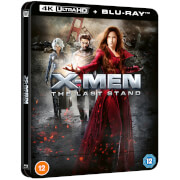 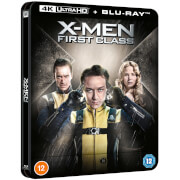 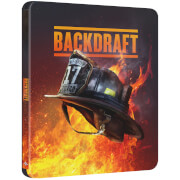 After a Decade of Silence... The Buzzz is Back!

In 1974, Tobe Hooper quite literally changed the face of horror with his landmark film The Texas Chain Saw Massacre. Although the hulking Leatherface and his trusty power tool left an indelible mark upon the cinematic landscape, it wouldn't be until 1986 that the buzz came back... in The Texas Chainsaw Massacre 2!

Relocating the cannibalistic Sawyer clan to a cavernous, labyrinthian dwelling beneath an amusement park, Hooper's deliciously demented sequel sees Leatherface and Co. continue their murderous exploits afresh. This time around, local DJ Stretch runs afoul of the Sawyers when she gets mixed up in the brutal slaying of two youngsters. Meanwhile, Lieutenant 'Lefty' Enright, is hell-bent on avenging the murder of his nephew Franklin in the first movie.

A cult classic in its own right, The Texas Chainsaw Massacre 2 serves up a heady blend of gratuitous gore, socio-political critique and jet-black humour - whilst Dennis Hopper's unhinged turn as Lefty needs to be seen to be believed! Whichever way you skin it, Leatherface's second cinematic outing is an uncompromisingly delirious vision from one of horror's great directors.

After a Decade of Silence... The Buzzz is Back!

In 1974, Tobe Hooper quite literally changed the face of horror with his landmark film The Texas Chain Saw Massacre. Although the hulking Leatherface and his trusty power tool left an indelible mark upon the cinematic landscape, it wouldn't be until 1986 that the buzz came back... in The Texas Chainsaw Massacre 2!

Relocating the cannibalistic Sawyer clan to a cavernous, labyrinthian dwelling beneath an amusement park, Hooper's deliciously demented sequel sees Leatherface and Co. continue their murderous exploits afresh. This time around, local DJ Stretch runs afoul of the Sawyers when she gets mixed up in the brutal slaying of two youngsters. Meanwhile, Lieutenant 'Lefty' Enright, is hell-bent on avenging the murder of his nephew Franklin in the first movie.

A cult classic in its own right, The Texas Chainsaw Massacre 2 serves up a heady blend of gratuitous gore, socio-political critique and jet-black humour - whilst Dennis Hopper's unhinged turn as Lefty needs to be seen to be believed! Whichever way you skin it, Leatherface's second cinematic outing is an uncompromisingly delirious vision from one of horror's great directors.

Havent watched it yet but great price and came super fast, 6 days to my door in Greece. Thank you very much Zavvi!

Saw is the Family!

A great release of a somewhat misunderstood and slightly underappreciated genre classic. The original Texas Chainsaw Massacre set the tone and gave the audiences a new kind of terror. Instead of showing too much the movie managed to get under peoples skin (literally!) by using clever moviemaking techniques and sound design to prove its point. At this point Tobe Hooper had already managed to become one of the great horror movie directors with a movie that stands side by side with other genre classics like Psycho. The 80's came and styles changed. When the opportunity arose (in a form of a several movie deal with Cannon Films) Hooper did something that might have seen like a miscalculation, but in hindsight something that's quite commendable. Instead of trying to "one up" the original, or following on its tails, Hooper re-invented the movie and instead turned it into a parody of 80's era excesses with stabs towards consumerism and yuppie lifestyle among other things. The original already had blacker than black humour that was mostly lost on audiences. The Texas Chainsaw Massacre 2 has the kind of humour that's so blood red that some people might have hard time digesting it. People didn't really get the sequel at the time of the release and because of this the movie didn't receive the acclaim it should have got. Also the production had it's share of troubles for example with censorship. At this day and age the movies have changed and it's easier to appreciate the artistic point of view and stylistic change Hooper took with TCM 2. The movie contains harsh violence that's amped up to borderline comic levels. It's a comedy of terrors with a very underlined message. Underneath it all there's also a heart. A heart that tells Saw is the Family! IMAGE QUALITY: The movie has been released on VHS and DVD, but until this Arrow Films edition there haven't been a release with such clear and clean image quality and losless audio. I've seen the movie several times, but with this release it really felt like seeing the movie for the first time. Especially the daytime shots literally look like they could have been shot yesterday. There are some minor instances where the movie film based origins (especially those shot at low light levels) betray the medium and look a bit rougher, but nothing really distracting. Therefore i wouldn't rate the image quality as reference quality, but considering the age of the movie i'd rate the quality as **** (Four stars). AUDIO QUALITY: The movie contains a lossless audio track which is clean of any dropouts, or clitches. The soundtrack isn't very dynamic, but strong enough to carry the movie and again fits the era and the movie in question. EXTRAS: The Bluray contains many extras which i've yet haven't had time to go thru properly. The early Hooper movie Eggshells is the most interesting of the extras. It's an early movie that pre-dates the original Texas Chainsaw Massacre and as such should prove to be an interesting artifact of seeing how the filmmakers style developed. There are also several other extras on this three disc package so i'm sure the fans of the movie will get their moneys worth, and even better understanding of the movies and how it came to be. I would recommend this movie to gorehounds and people who like wild and wacky 80's movies and aren't too scared ot things going a bit red at times. A special mention goes to Dennis Hopper who plays... well... Dennis Hopper. A raving lunatic with a mission that is. A big thank you to Arrow Films for doing this fantastic restoration and quality package.

This set is stunning ...from the transfer to the extras are all top notch, as well as the commentary...this set also includes an extensive book with tons of photos...another beautiful Arrow release...get it before they're gone..

This Arrow-release is simply AMAAAAZING!

AMAZING! I can't stress it enough! This release, this box, the book, the three discs, the extra features, the movie itself - This has got to be one of the coolest movie-boxes of all time. There's only one thing that could have done it better - if it had been a Steelbook as well... / F. G. Mariestad, Sweden

Excellent movie from arrow film well worth the price

This edition is what fans of TCSM2 have been dreaming about. It has everything you could ask for. The movie, a slew of special features, a booklet containing a gorgeous amount of info about the feature, as well as two of Tobe Hoopers hard-to-find early features. To top it off, the packaging is artfully done with care. As a fan, I couldn't ask for a better package.

The Texas Chainsaw Massacre 2, is not the best movie (it's fun tough), but this editon is insane alot of extras and nice book.

nice follow up to the original texas chainsaw massacre..disc is loaded with a wealth of extras and a great booklet...

Nice movie in an amazing boxset

Of course TCM2 is not as shocking or great as the first one. But it is still good if you are a fan of the series and horror films in particular. What makes this a five-star-review is the kind of boxset the film got. It looks beautiful and has nearly everything you could want from a movie. Bonus material is a ton and you just HAVE to be happy with this set. Collectors need this!

I'm a huge movie fan, but have never been a massive collector. I've owned and seen 1000's of films from all sorts of genres, but I always sell on and buy more. My actual collection of films is limited to only about 80 films, and this set sits proudly amongst them. Brought to you by Arrow Films, who make a variety of awesome releases, this edition of the second of the Texas Chainsaw series really stands out in any collection. Not only have they taken the original transfer to make the video for the film in true HD (a process overseen by the original director of photography), but they've also included the original uncompressed audio files too, and a ton of extras. On the TCM 2 blu ray, we have extras such as commentaries, and alternate as well as deleted scenes. There's a documentary about the films creation and lasting appeal, and a few interviews too. Even with these alone, this set would be well worth the price it cost me. But there's more. On disc 2, we have two of Tobe Hoopers early works, a short from 1964 (10mins) called Heisters, and his first feature length film from 1969, Eggshells (90mins) Both of which have been painstakingly crafted to 1080p from their original source materials. Tobe Hooper also provides commentary on the latter of these two. We also have an interview with the man himself, as well as a trailer reel featuring all the trailers for every one of Hoopers films. And there's still more. The final part of the collection, is a fantastic book covering everything you wanted to know about Tobe Hooper, chainsaws and more, with writing on the director’s early works by Brad Stevens, an investigation of Tobe Hooper’s three-picture Cannon deal by Calum Waddell, new writing on The Texas Chainsaw 2 by Kenneth Muir, a look at the film’s long battle with the BBFC and an exclusive interview with Hooper by Stefan Jaworzyn, author of The Texas Chainsaw Massacre Companion, rounded off with an appraisal of the highs and lows of the Texas Chainsaw franchise by Joel Harley, all illustrated with archive stills Every part of the collection is put together with care and attention to details, and it's great. A lot of the time, extras on blu ray releases can seem superfluous, and like they're just there to make it seem like you get something more than you need. Commentaries from people who do't want to be in the studio, gag reels that are pointless, and a trailer if you're lucky. But the extras here are expansive, and disc 2 could have even been justified having it's own release. TCM2 by Arrow Films is a worthy addition to anyones collection, I can't recommend it enough.