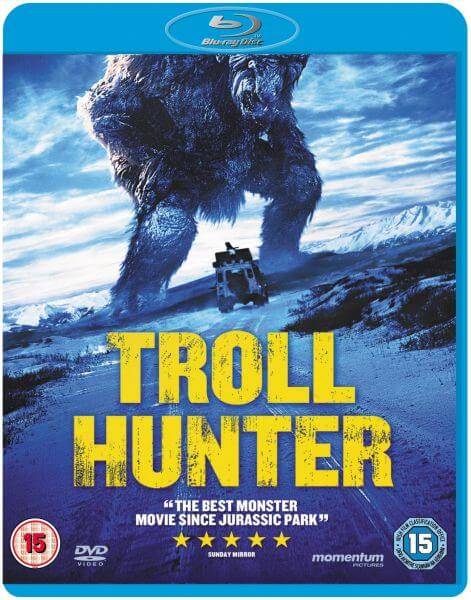 Whilst investigating a series of suspicious bear killings, a group of students track a mysterious 'hunter' who wants nothing to do with them and attempts to shake them off his trail. Sheer persistence leads the group right to the prey he is trying to hunt which they soon learn are far more dangerous and mystical creatures than mere bears.

Troll Hunter is a thrilling and wildly entertaining ride where secrets are uncovered thought only to exist in fairy tales.

Whilst investigating a series of suspicious bear killings, a group of students track a mysterious 'hunter' who wants nothing to do with them and attempts to shake them off his trail. Sheer persistence leads the group right to the prey he is trying to hunt which they soon learn are far more dangerous and mystical creatures than mere bears.

Troll Hunter is a thrilling and wildly entertaining ride where secrets are uncovered thought only to exist in fairy tales.

Troll Hunter is a fantastic film. It is in the "found-footage" or documentary style that has be used by such films as "The Blair Witch Project" or "Cloverfield". I guess it is a monster movie, though there are also threads of a mystery. It is tense, funny, epic and emotional, and though I think it misses a few times, it is still more often a hit that keeps you engaged throughout and warrants a viewing. Though this is a foreign language film, the sparing use of dialogue when you want to be looking at the screen helps a lot, so shouldn't put you off if you are the subtitle-warey.

Troll Hunter starts slowly, but once it gets going it is very good. Low budget, but special effects are realistic. Much better than many of these types of films that I have seen. English dubbed, but done very well, it takes nothing away from the film at all. It is quite tense at times and can make you jump. Miles better than Blair Witch or Cloverfield! Only deducted one star as I don't think it is one that I could keep watching over and over again.

Having seen an early trailer for Troll Hunter, and being really impressed by the look and feel of the film from that short taster, I had been really looking forward to seeing this on Blu-ray. The danger with high expectations is that it makes it tough for a film to live up to them - but not in the case of Troll Hunter. The film delivers on everything it promises: the performances are miles away from those found in Hollywood B-movies, the scenery is terrific, the cinematography perfect (both in the daylight and night scenes), the special effects are as good as those found in Lord of the Rings and the film delivers a few scares and intense moments, alongside doses of humour. I watch a lot of films and this is one of the best I've seen in a while, a genre masterpiece.

'If you go down to the woods today' - Just when none are there, four turn up at once... really enjoyable film with a little bit of edge. A well thought out monster flick that has a dark side to it. It takes a good 20 mins to get going but when the first troll appears the film takes off... Don't go crossing any bridges alone and without full wet weather gear.

As long as you realise that this film has its tongue firmly in cheek, you will not be disappointed. Troll Hunter is filmed in the 'discovered camcorder' style, with a low budget, compared to it's hollywood counterparts. Troll hunter is a funny, well shot film and even the CGI trolls are very well done.

Trolls in Norway? Not the usual set-up for a movie, granted, but this funny, spooky at times film is brilliant, and a complete breath of fresh air using the 'found-footage' sub-genre to great effect. Oh and just so you know, it's in subtitles. The story centres ona group of college students from a small Norweigan town investigating a spate of mysterious bear killings out in the countryside. It is very much a mockumentary, as said students, led by 'presenter' Thomas set about interviewing local hunters and begin to track down Hans, played by Otto Jespersen, and meet the best character in the film. He's, at first, reluctant to let the students in on his secret vice, that rather than bears, he hunts trolls. This leads to the standout moment from the film, Hans screaming 'TROLL!', as can be seen in the trailer below. This really starts off the comedic values of the film, and, in a sense, it is a kickstart for the film itself, which suffers from a slowish start. Alas, the first encounter brings a sense of excitement with it, as the mythical creatures are unveiled, and to be honest, the CGI effects are pretty well done. Trolls are made to look humourous, yet aren't completely ridiculous. In a way, they look like an offshoot of the 'creatures' in 'Where the Wild Things Are', not a bad thing in any sense. As the movie progresses, the dark comedy is there as much as the horror, if not more so. Hans plays upto most of this, and with research by myself after the film, it wasn't a real surprise to see he is a comedian! His character is strangely loveable, as the viewer relates to his decades spent on what must be the hardest job in the world. The surrounding students are in fear of the trolls AND Hans when they first meet him, but they too grow to love the strange old man, as he widens their horizons. Also a member of the TSS (Troll Security Service), who is technically Hans' boss, Finn, is unwittingly the butt of a couple of brilliant comedic moments, showing the depths that the government go to, to hide the trolls. Another thing I enjoyed, was the considerable backstories given to the trolls and the various different types of them (all of which have humourous names). They fart, they can be destroyed when exposed to UV light and they even have rabies. The various sizes also allowed for a nice variation as the characters encountered increasingly large beasts throughout the film. This culminates in a fantastic end sequence, in which the CGI really does well to create such a being. The beautiful scenery of Norway adds to the depth of the film, with lovely little caves and exotic lakes being shown through the car windows, whilst the students and Hans travel to their next batch of trolls. It's in direct contrast to the darkness of the film, and provides relief during sections of troll-busting. Another highlight was the very, very last scene where it turns out that the Norweigan PM has indeed revealed the existence of trolls, but none of the watching media realised it! It was a laugh-out-loud moment that the entire cinema enjoyed. Infact, I only really had two negatives about the film. Number 1: the first 15 minutes are slow and not enough important stuff is shown to warrant any of it really. Number 2: the ending! It leaves the door wide open for the characters future, and does end rather abruptly too. I could've done with a further 5-10 minutes to tie it up nicely. As it is, Troll Hunter is a brilliantly funny and dark film. It won't be, and isn't for most people, but me and my friends enjoyed it enough. Much better than I expected, and it had subtitles too!

Scandinavia is becoming a hotbed of fantasy film making at the moment. Perhaps it's because Hollywood is running out of ideas and for most English speaking audiences the myths of other countries haven't been played out yet. With the Northern European countries producing their own skewed versions of the classic slasher movie, groundbreaking vampire movies and twisted Christmas tales, Troll Hunter is in great company. If you like the found footage horror of Blair Witch or Cloverfield or you're seeking suspense and action without the clichés of a big studio picture or if you want a horror film that isn't built on well trodden plot ideas, the mixture of thrills, terror and whimsy in this Norwegian effort will delight you. The combination of documentary style hand held footage and CGI monsters fits hand in glove, with the shaky camera-work adding to the veracity of the computer generated creatures. Troll Hunter offers a unique viewing experience, one where you can't predict the outcome based on previous viewing habits.