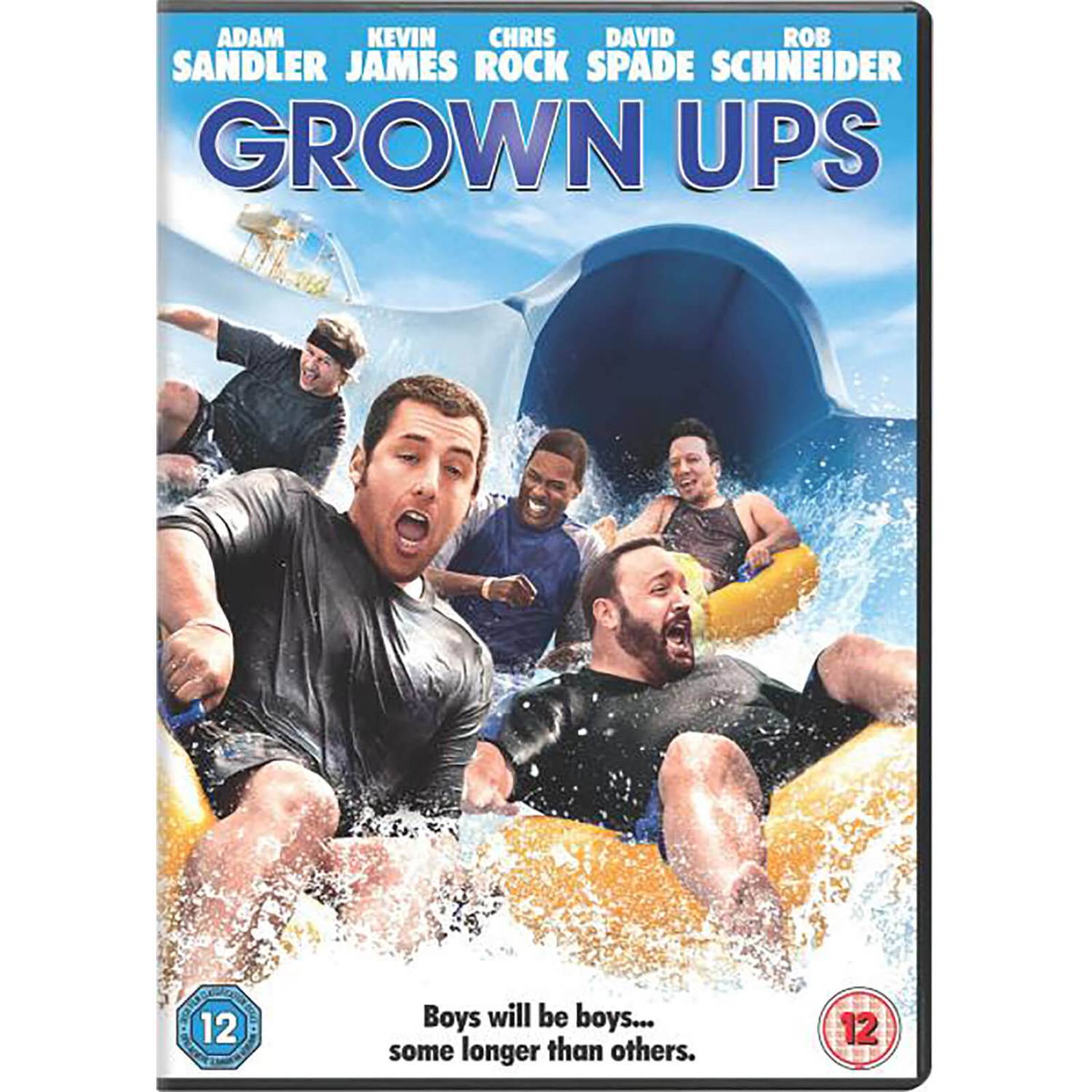 Boys will be boys... some longer than others.

The unfortunate passing of their high school basketball coach means that five old friends and teammates re-unite after 30 long years. They bonded together in victory all those years ago, and now their back to mourn, but they soon realize that they've possibly grown up too fast. Once they've got the band back together they turn back into their former selves.

A fourth of July weekend usually means joy and happiness, as well as independence, but none of these men wish to be fully independent, they don't want to be 'Grown Up', their lives of adulthood, fatherhood and business takes a back seat for the weekend and they can't help but have fun.

Boys will be boys... some longer than others.

The unfortunate passing of their high school basketball coach means that five old friends and teammates re-unite after 30 long years. They bonded together in victory all those years ago, and now their back to mourn, but they soon realize that they've possibly grown up too fast. Once they've got the band back together they turn back into their former selves.

A fourth of July weekend usually means joy and happiness, as well as independence, but none of these men wish to be fully independent, they don't want to be 'Grown Up', their lives of adulthood, fatherhood and business takes a back seat for the weekend and they can't help but have fun.

so your looking back on your high school years, reminiscing about all the great times you had. You snap back into reality, back to your new life, where bills and work rule. Wouldn't it be great to rekindle all those amazing times you had? alas, that's the problem with being a grown up... or is it? grown ups takes a cast that need no introduction, and take you to a place you want to be. when the boys old basketball coach dies, years after they started there journey into monotony, the gang are reunited, and they intend to continue where they left off! let the likes of Adam Sandler and Chris Rock, take you back to those oh so sweet high school years. Let them do the things you've always wanted to do since growing up. Just buy the film already!

An ideal film for a relaxing Sunday afternoon, you know when you want to relax and it doesnt matter if you fall asleep for half hour. Its not the funniest of films and can be a bit predictable but its also not the worst film out at the moment. The story line is a bit lame but the odd joke here and there will have you laughing. Despite the number of stars in the film its not one that you're going to be raving about to anyone who will listen, a bit disappointing really.

Grown Ups seems to be a film that only got made as an excuse for several popular comedians and friends to band together and take a communal vacation. Adam Sandler's previous co-stars and buddies, Chris Rock, Rob Schneider, David Spade and Kevin James plus his background regulars like Steve Buscemi and Kevin Grady are all present and correct. The film is an uneven mash-up of comedic setups and gags, with a shoestring of a plot holding things together. After their high school coach passes away, Sandler and the above friends set off for a large cabin for a weekend of memories. There they find themselves having difficultly connecting to each other, their wives and their technophile children, who want nothing to do with the great outdoors. Slowly and surely, however, everyone comes to love outdoor play. After a while, the plot begins to move forward, and Sandler, as always, lays the film's schmaltzy themes on thick. There's clearly a lot of improvisation going on, and while it sometimes shows quite painfully, the cast's laughter and easy-going camaraderie are occasionally quite infectious. While not always laugh-out-loud funny, many of the sequences in the film, are extremely enjoyable (a sequence in a water park, for instance, is delightful). Grown Ups could have been funnier. The story is mostly nonexistent, and the gags don't always generate full-throated laughs. But the cast does their best (even the women are allowed to be funny – a rarity in many comedies nowadays). Still, the film is certainly a crowd-pleasing genre effort made by some old pals, and you can't really blame Sandler and pals for that – it's what Sandler's always done.

Lenny (Adam Sandler) is the self-proclaimed most powerful agent in Hollywood. He’s married to fashion designer Roxanne (Salma Hayek) and has three children with little grasp on reality. Lenny feels that much of his success is owed to the lessons provided to him during youth basketball by “Coach Buzzer”. On hearing news of his beloved coach’s death, Lenny wrangles up the family and heads to the funeral where he is reintroduced to the old starting lineup, Kurt (Chirs Rock), Rob (Rob Schneider), Marcus (David Spade), and Eric (Kevin James). After the funeral, Lenny makes arrangement for their families to spend the Fourth of July weekend at the nearby lake, providing them with a chance to catch-up and expose their kids to the elements. This may be a bold assumption, but with so many Saturday Night Live alums appearing above the title, I do believe Grown Ups is intended as a comedy and therein lies the trouble: Grown Ups is not funny. It might be gross, lowbrow, and nonsensical, but it isn’t funny. Movie humor requires that the comedians not snicker at the jokes of their pals as if to cue audience laughter. It also helps to not affix one attribute to each comedian and ride it for the remainder of the film. Does Kevin James look heavy enough to be a running fat joke to you? Would Rob Schneider’s affection for older women split your sides? As lame as these efforts are, none of them compete with that which Chris Rock is given. The movie is exactly clear, but it seems that he enjoys cooking. For some that makes him into a subtextual homosexual stereotype one moment, and a suspicious cheating black husband type the next. Regardless your interpretation of the coding, his vast spans of time without significant contribution to “the story” raises eyebrows. Celebrities hanging out doesn’t have to make for a bad movie. The original Ocean’s Eleven was a Rat Pack collaboration and Steven Soderbergh’s 2001 remake rifled through George Clooney’s curriculum vitae for supporting players. Both these films concerned a plot that was worthwhile, a casino heist. Friends get together to perform a task with a clear goal in mind—a tried and true formula. That’s not good enough for industry trailblazers Adam Sandler and Fred Wolf, who pen a groundbreaking script for Grown Ups in which characters appear for the sake of luck, have one train of thought, have friends who despise them, have one defining characteristic that they retain from youth, and to top it off they have nothing of importance to accomplish. I could spend time on the levels of non-acting found in the child actors of Grown Ups, but the likely culprit for their performances is the unholy alliance between the writing and director Dennis Dugan’s orchestration. There is something for the characters to accomplish, and it’s the clichéd since the early ‘80s sporting event rematch. Even the worse of these movies does an effective job in setting up the big game… that is until Grown Ups came along. Here, Lenny and friends didn’t even know they were going to be playing basketball, but somehow the wives found the time to sew uniforms for both the boys and cheerleading attire for themselves. It’s not enough to force characters into mingling when they are supposedly out of contact for years yet never miss a step. They don’t argue with each other, and they don’t discover a pirate treasure that will save their neighborhood. They have no drama. Since there is no friction or comedy, I see nothing that screams for Grown Ups to be approved, filmed, and theatrically released nationwide. The title is what children call adults and if it’s part of your vernacular, you just might be in the target demographic. *

Adam Sandlers delivers another characteristic performance in a film heavy in immature humour interspersed with some sweet, sentimental moments and some interesting metaphors. Recommended for a lazy viewing session.

This is just hilarious. Its a feel good, funny, family film. Adam Sandler and Kevin James are brilliant. I highly recommend it. You will be laughing out loud.

I loved this film, I am a huge Adam Sandler film fan and this met all my high expectations of what I thought the film would be.

This is one of the funniest movies ive ever watched. Its packed with comedy that will make you laugh from begining to end.

Absolutely great funny film , for all the family. It was hilarious all the way through.