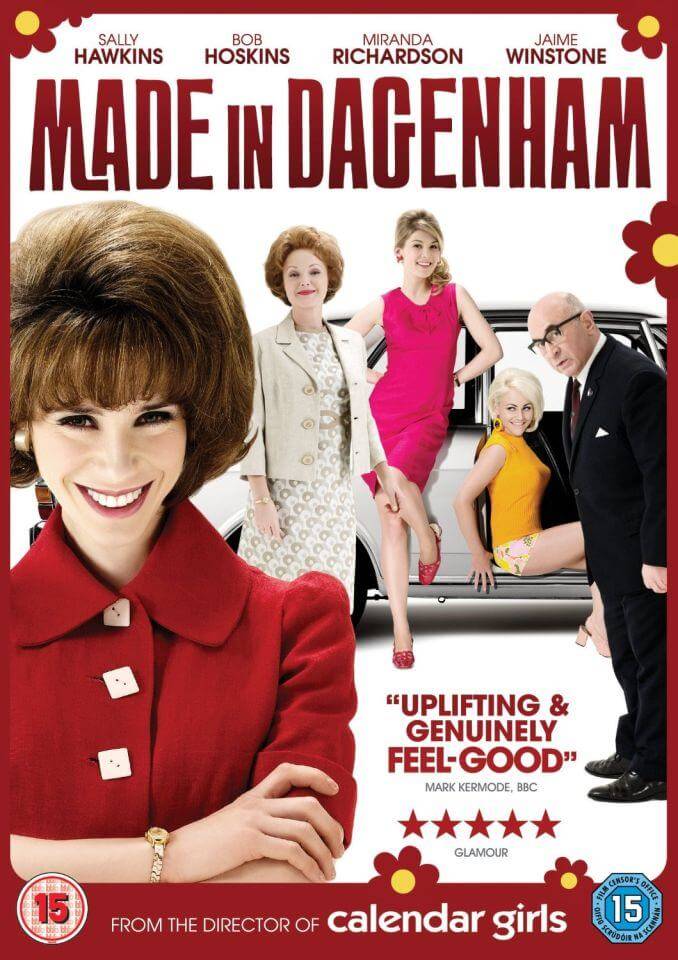 The film stars the award winning Sally Hawkins as Rita O'Grady who is the catalyst for the 1968 Ford Dagenham strike by 187 sewing machinists which led to the advent of the Equal Pay Act.  Working in extremely impoverished conditions for long arduous hours which they must balance with their domestic lives, the women at the Ford Dagenham plant finally lose their patience when they are reclassified as "unskilled".  With humour, common sense and courage they take on their corporate paymasters, an increasingly belligerent local community, and finally the government itself.  The leader of the women's struggle is fast-talking, no nonsense Rita whose fiery temper and occasionally hilarious unpredictability proves to be a match for any of her male opponents, and is echoed by Barbara Castle's struggle in the male-dominated House of Commons.

The film stars the award winning Sally Hawkins as Rita O'Grady who is the catalyst for the 1968 Ford Dagenham strike by 187 sewing machinists which led to the advent of the Equal Pay Act.  Working in extremely impoverished conditions for long arduous hours which they must balance with their domestic lives, the women at the Ford Dagenham plant finally lose their patience when they are reclassified as "unskilled".  With humour, common sense and courage they take on their corporate paymasters, an increasingly belligerent local community, and finally the government itself.  The leader of the women's struggle is fast-talking, no nonsense Rita whose fiery temper and occasionally hilarious unpredictability proves to be a match for any of her male opponents, and is echoed by Barbara Castle's struggle in the male-dominated House of Commons.

I thoroughly enjoyed this movie, I can recommend it to all and guarantee they will enjoy it as much as our family did.

This is an excellant movie, and so true. Most enjoyable

Excellant movie, most enjoyable. thoroughly recommend to all

Best of British depicting a real event in the era it happened, the late sixties. Brilliant performances by all the cast depicting the stand for equal pay for women in the UK. Good mixture of drama, emotion, humour and 60's fashion, mini skirts and white boots are cool. Highly recommended for a good nights home viewing.

This film is definitely worth a couple of hours of your time. Very entertaining in a very British sort of way! It tells the story of the female staff at a Dagenham car plant, who walked out on strike to get equal pay with the men. Sally Hawkins plays the lead character very convincingly and Bob Hoskins as the union rep who supports the women is excellent as usual, played with a bit of humour. And don't you just love all the outfits they wore in the 60's? The costume department has done it's job well!! I watched this with 4 other friends and we all agreed it was a recommended watch.

The movie documents the historic struggle of Ford's female machinists for equal pay at the Dagenham plant in 1968. The film starts innocently enough, introducing the viewer to the period and environment, before progressing to the main theme, the strike at Ford's Dagenham plant of its 187 machinists against first the management's move of having them downgraded to unskilled labour and ultimately about the inequity of receiving a lower salary for an equivalent work the other 55,000 male workers did at the plant. The women, led by charismatic Rita (Sally Hawkins) completely baffle the management - and union leadership - with their organisation, persistency and determination. Where I think the movie succeeds in particular, is in portraying to a younger audience that rights they take for granted had to be fought over very hard, and were granted much more recently than what one might imagine (the final law granting equality of pay in the UK being passed only in 1970). The struggle meant no pay for a considerable amount of time (while the strike lasted) - a significant burden to take for the workers, most of whom had families to take care off, as well as principles. On top of that the movie does a decent job of portraying the period, another added bonus for people born later and interested in how their parents' times looked like. In many ways women are treated and looked upon quite badly - something that will bring strong recollections of scenes from Mad Men - Season 3 [DVD]. Also of interest was the contrast between the steely determination of Ford's US management, and the cowed UK counterparts, something that sounds plausible at least. Finally, the portrayal of British male politicians is far from favourable - they range from bumbling incompetents to lazy old men, whose only remaining occupation seems to be to enjoy the office while doing the absolute minimum (and certainly not in rocking any boats). Having seen a pretty similar portrayal recently in Special Relationship (HBO Films) [DVD] I cannot say this is very encouraging, assuming it is accurate. Where I feel the movie loses it's fifth star is in being fairly cheerful and easygoing throughout. This is not to say that the strikers' catastrophies and setbacks are not shown but overall these are brushed aside fairly lightly - not something I imagine does a good portrayal of what the real struggle must have looked like. Possible hunger, spousal suicides, union betrayal, bailiffs removing belongings etc. are all not things that people just gloss over and instantly forget. On the other hand, the easy treatment of the subject might make the movie more appealing to a wider audience, who are looking for uncomplicated entertainment first. In spite of this I think the movie deserves to be seen, both for portraying an event of historical significance, as well as for being well written and acted, and for it's often funny moments, too.

A highly enjoyable watch. Superb acting and great script. The producers may have taken a few liberties with the historical accuracy of what the fil's about - the main character Rita O'Grady is a completely fictional one, but the spirit of the message...women's fight against inequality in the workplace...comes shining through!

Me and my husband saw this film at the cinema, we both loved it, a very good British film, brilliant acting especially Sally Hawkins, who played Rita O' Grady, she was excellent and very believable.

Made in Dagenham follows a well trodden path for British films being the story of a small bunch of people (in this case crucuially, women) who stand up against a system, whilst all around then to seem to think their struggle is futile. As such it can be compared to classics such as "The Full Monty" or dare I say it, "Passport to Pimlico". Now whilst this film is clearly not in the same class it is nonetheless a good, solid, engaging piece of work. The story follows the female workers in Ford Dagenham who struck to get equal pay with the men. They are dismissed not only by their bosses but also not really well supported by their own trade union. It may seem farcical now, but there really was such a dismissive attitde towards this issue at the time. Some of the male characters seem almost like caricatures representing stereotypical sexism, but I am quite sure that in real life they were just that bad. The cast are absolutely excellent, although the plot could have been a bit stronger. The period feel is particularly well done and it is pleasing to see a story centred around working class struggle. But don't run away; this is not all serious. There are plenty of laughs,and a fewsad bits along the way. The device at the end where the real heroines recount their story may be a wee bit cliched these days, but in this context it does work particularly well. This is a good film celebrating the heroism of a bunch of women who in their own way are just as historically significant as the suffragettes.