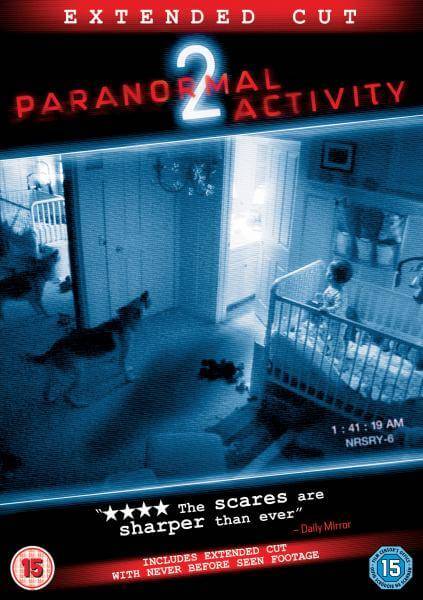 After coming home to find what appears to have been a burglary Dan and Kristi become very concerned and also intrigued as the only room in the house that wasn't touched was their infant son Hunter's room. Determined to find out what happened and to make sure that it doesn't happen again they set up a large amount of cameras around their house in order to catch anything that may happen next.

When they begin to look back on the footage they notice disturbing and harrowing occurrences, such as things moving on their own and strange sounds. Dan overlooks this but his daughter Ali becomes obsessed with the footage and sets out to find out what is going on.

As she delves more and more into the situation things start to get much worse and the family start to worry that there may be something sinister lurking in their home! (Matt Fairfield).

After coming home to find what appears to have been a burglary Dan and Kristi become very concerned and also intrigued as the only room in the house that wasn't touched was their infant son Hunter's room. Determined to find out what happened and to make sure that it doesn't happen again they set up a large amount of cameras around their house in order to catch anything that may happen next.

When they begin to look back on the footage they notice disturbing and harrowing occurrences, such as things moving on their own and strange sounds. Dan overlooks this but his daughter Ali becomes obsessed with the footage and sets out to find out what is going on.

As she delves more and more into the situation things start to get much worse and the family start to worry that there may be something sinister lurking in their home! (Matt Fairfield).

If you liked the first one then you will love this!

Brilliantly conceived and acted movie, a great prequel to the first film, just as scary. i may even have to get in touch with the makers to pay for my carpet to be cleaned as i jumped out of my chair quite a few times and had my coffee in my hand at the time

This is such an AMAZING film!!! I loved the first one and this is even better and I have been dying for it to come out on DVD and Blu-ray!! The way they have tied it in with the first film is BRILLIANT!! It has perfect timing when it comes to the moments that make you jump, they leave it long enough for you to get yourself worked up because you know something is going to happen but not so long that you start to get bored. The fact it is filmed using several different cameras is also a great touch as you find yourself searching the screen for anything that might be happening everytime it switches to a different camera view! I was literally bouncing off the walls after watching this I was that excited about how good it was!! I strongly recommend it, but remember the warning from the first one, don't watch it alone!!

better than the first one

Paranormal activity 2 is definitely better than the first. It seems better written, and the way it links in with the first bulks it out and gives it more depth. If you found the first one to drag a little between pieces of action, you'll find this one much better to watch as there's less time spent looking at empty rooms. It succeeded in making me jump multiple times, and by the time it was over I found myself with my feet tucked up on the chair off the floor and a blanket firmly round me. Overall, a good film.

Paranormal Activity 2 finds itself stuck between a rock and a hard place, or whatever that old saying is, because as much as it wants to be different and its own entity, it also doesn’t want to lose its connection to the first film. Now that first film, the little word-of-mouth film that could, was a honest-to-goodness damn good scare. It was original enough to feel new, built suspense at various growing intervals, and was also a slow burn, that even if you weren’t totally freaked out, an hour after seeing it, at home, you would be. A sequel was inevitable. But the results aren’t. A family, who recently moves into a big house, comes home one day to find the house vandalized, but nothing missing. To ensure some eased minds, the dad installs security cameras. That’s all of the plot I’ll give you. Director Tod Williams establishes that this world will have the feeling of the original, but amps up most of the “jump-out-of-your-seat” moments, but they all come a little to late. The family we follow is fine; good acting, genuine scares, but it takes too long to get going. And it undoes its agenda because of one simple reason that debunks these found footage films: there really wasn’t a reason for them to record themselves continuously. If the film would have followed them via those newly installed security cameras, the events of Paranormal Activity 2 would have been justified, but the dad also records almost everything, until the daughter picks up the camera. Because of this, there’s plot holes and inconsistencies, which take you back out of the film, even with some good scares, they’re too hollow since we’re not invested as much with the family’s plight. It’s a little unfair to this sequel – that thankfully doesn’t go all Blair Witch 2 on us - but it feels largely predictable. The scares are almost telegraphed. And still, it almost works. If the audience wasn’t left in the dark on some plot details and if the script didn’t offer as much humor as it does, maybe the ballsy and intense ending would have ringed a bit more genuine. Make no mistake, Paranormal Activity 2 will scare most of you, yet it relies too much on the first film to creates its intensity. Also, by using the kid you’ve seen in the trailer and the dog as plot devices, with any kid violence, and especially animal violence, for the audience it is always an instant no-no, since the audience will automatically feel anger about anything happening to these two. But the script uses them as a device for a scare, and doesn’t allow us to care about what’s going to happen. It’s a sequel that gives you more: louder noises, larger set pieces, but also feels a little too slick. Gone is most of the spontaneity of the original that made that film so special. Since most of the audience is now savvy to the tricks, Paranormal Activity 2 is not recommended with a crowd. Trust me. See it alone, but you won’t get too worked up.

I was really surprised by this film. I think the storyline is good and it really does keep you on the edge of your seat. I don't get scared easily but this film really made me jump!

This was a really good film, although i think number one was a bit more scary i find this one to be a bit more extreme and also very scary. Paranormal activity films are all brilliant, but i do like this one best as its more extreme. I think its a must see!!

Shot with a much bigger budget (yet still peanuts compared to the usual), Williams successfully upgrades the mockumentary stylings of the first through the use of several cameras as opposed to the one, effectively blending CCTV footage with hand held cam to capture the banality of family life, and the chaos their unwelcome intruder unleashes. Knowing full well the power of anticipation and the effect of a well placed thud, Williams structures some superbly choreographed sequences wracked with tension, and featuring some nifty sound and special effects, including one jarring sequence which takes a memorable moment from the first movie and turns it up to 11. Also similar are the traits of its characters. There is the man of the house, sceptical of anything remotely supernatural to the point of firing his sons’ religious nanny for trying to ward off the evil spirits; a curious teen who dabbles with an Ouija board and surfs the net for additional info, (giving more hints to the origins of this possession); and the potential possessee, who slowly unravels from the unwanted attention. Hell, even Katie and Micah (of the first movie) make an appearance. Yet this is what makes Paranormal Activity 2 such a compelling watch. The treatment of its story as a continuation of a profoundly thrilling experience rather than a standalone film, places more empathy on the tragedy which has befallen these unfortunate souls, an element sorely lacking in our torture porn times. Paranormal Activity 2 may not have the same element of surprise the original had to its advantage, but it still seeps under your skin with the same chilling intimacy.

I went to see this with friends, have to say I didn't really want to, saw the first one and wasn't that impressed. The film is only 85 minutes long and othing really happens at all. The camera moves from room to room and it gets really repetitive. There are a few bangs etc, but you expect this from the first film so its not a real surprise. There are a few jumpy bits near the end which almost make up for it.

Well I thought the first one was 'ok' but thought it didn't really live up to the hype. This one, however, does. It's very, very creepy and will have freaking out at the smallest noise when you go to bed that night. Well worth a watch!