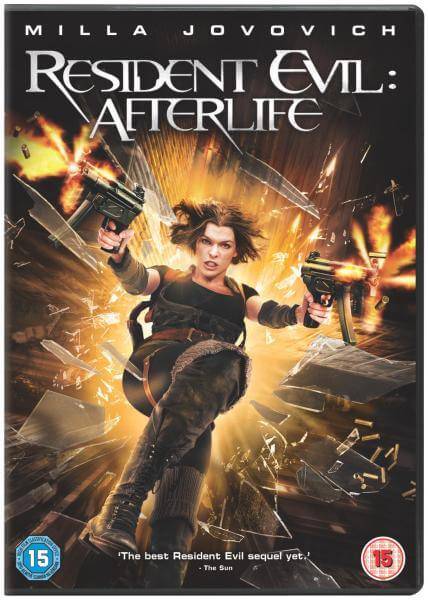 Five years ago a deadly infection spread throughout the earth and ravaged its victims, changing them and mutating them to the ranks of the undead. Alice (Milla Jovovich) is still tirelessly searching for survivors and is helped by an old friend.

The dreaded Umbrella Corporation are out to get Alice and the vendetta between the two escalates; there are rumours that a few survivors have found refuge in Los Angeles, but once there, Alice and her crew find that the city has been overrun with zombies; they’ve just stepped into an unexpected ambush.

Five years ago a deadly infection spread throughout the earth and ravaged its victims, changing them and mutating them to the ranks of the undead. Alice (Milla Jovovich) is still tirelessly searching for survivors and is helped by an old friend.

The dreaded Umbrella Corporation are out to get Alice and the vendetta between the two escalates; there are rumours that a few survivors have found refuge in Los Angeles, but once there, Alice and her crew find that the city has been overrun with zombies; they’ve just stepped into an unexpected ambush.

A Bit mixed up but still entertaining

Resident Evil afterlife is quite an entertaining flick. But what lets it down is the constant "What the heck happened there?" Moments. One minute she's involved in a helicopter crash into a mountain and the next she is flying a private plane... Where the heck did she pull that from?! Good job it had fuel in this zombie apocalypse! But all of those moments aside it is still an entertaining film with quite a cool fight sequence at the end. Overall 3/5

if you like the other films you will also like this! plenty of action and left open for another sequel , yipppeee!

This film is definately worth a watch and i love the fact that chris has now been introduced at last i just wonder how much longer they can keep making these films. All in all id give this movie 4 out of 5 the plane landing scene is very good just quite slow and drawn out when they dont need to be

I really enjoy the Resident Evil films and this one is no exception. Sure, you really have to suspend your disbelief for some of the stuff, but it is akin to suspending your disbelief in any comic book or fantasy film. These films are telling an interesting story and they do a lot better from one film to another than other big budget movies. Alice continues to wage her war on the Umbrella corporation leading an assault on their headquarters in Japan. Her troops, the many clones of herself. Unfortunately, though she is able to exact a bit of revenge, she also loses her powers thanks to the villain Wesker. Though she rather prefers to be human I think she would be better off with her powers. Well she ends up trying to find those she saw flying off to a safe haven in Alaska, she makes it there only to find a field of planes and no sign of humans other than Claire Redfield who has some strange device on her. Well they end up holed up in a maximum security prison and it becomes overrun and then a big dude comes and chaos ensues. Great action, Milla is probably my favorite heroine in film right now. Well I would say scratch the probably, she is. The film also does really good at making the film look like a 200 million dollar blockbuster on a 60 million dollar budget. The end most certainly suggests another film and I am most certainly up for another go around. I just enjoy the films, they are fun and fast and usually have good action and zombies. They may not be works of art, but they keep me entertained and I applaud this series for that, as I also applaud them for keeping the story intact and not completely ignoring stuff from the previous movies. --------------------------------------------------------------------------------

Better than I expected!

Very enjoyable film, the plot was a little thin but it kept me entertained. Nothing better than a bit of zombie action & in that respect it doesn't disappoint!! Worth a watch for sure

This film very much continues the universe's current love affair with any zombie tv or movie. Any zombie flick fans will certainly not be disappointed by this film, very enjoyable.

This is a highly anticipated film that has lived up to its expectations and again leaves us wanting more after having another taste. From there start of the film you're hit with a stream of action and bewilderment with Alice (s) creating Kill Bill like violent scenes mixed with Matrix style movement, bullet time and screen shots. The chaos doesn't let you look away for a second and makes the viewer's highly anticipate what's to happen next. To understand what's going on you should really have watched previous films as you won't realise some of the scenes relevance, but it's not needed to just enjoy the carnage. The combat then moves onto destroying the undead with an arsenal of weapons, melee and explosions to make it all the more intense. The scenes are graphically excellent, ranging from the exploding of heads to the insane acrobatics The action plays along well with the story, hitting the right buttons at the right times. The film contains both elements from games 4 and 5 effectively making use of some unique parts including; parasites in bothhounds and humans, the Executioner with his destructive giant axe and fast paced combat with Albert Wesker whose forces prove indestructible. Unfortunately the film just goes too quickly and by the end you just think "Is that it?" This is either annoying and a clever cliff hanger, or just annoying. A minor niggle is that on the new Resident Evil Afterlife disc you might expect to see an interesting design just like all the others but you will end up disappointed with just a simple white print disc, not a huge deal but still. Overall I would definitely say it's worth a watch especially for those who enjoyed the previous ones, and I'll definitely watch the next one and eagerly await its release. I give this film a head splitting 7.5 / 10

Not as good as the rest of the franchise, but, if you love action movies, and Mila, you will love this film. Not as good as extinction, which i think is the best, but very watchable

Bound to please the legions of Milla fans who have doubtless poured over the extras-rich DVDs of the first three Resident Evils, as well as her please-sequel-this gem Ultra Violet

This fourth installment clearly learned fromt he success of the third film and delivers plently of gore and action scenes. It is awash with dead bodies and blood. The main body of the film is set in an abandoned max security prison surrounded by thousands of infected. Alice bloody thirstily romps through this until the climax of a thrilling duel with an enormous axe weidling creature in pouring rain. Banal, pointless, but fun!