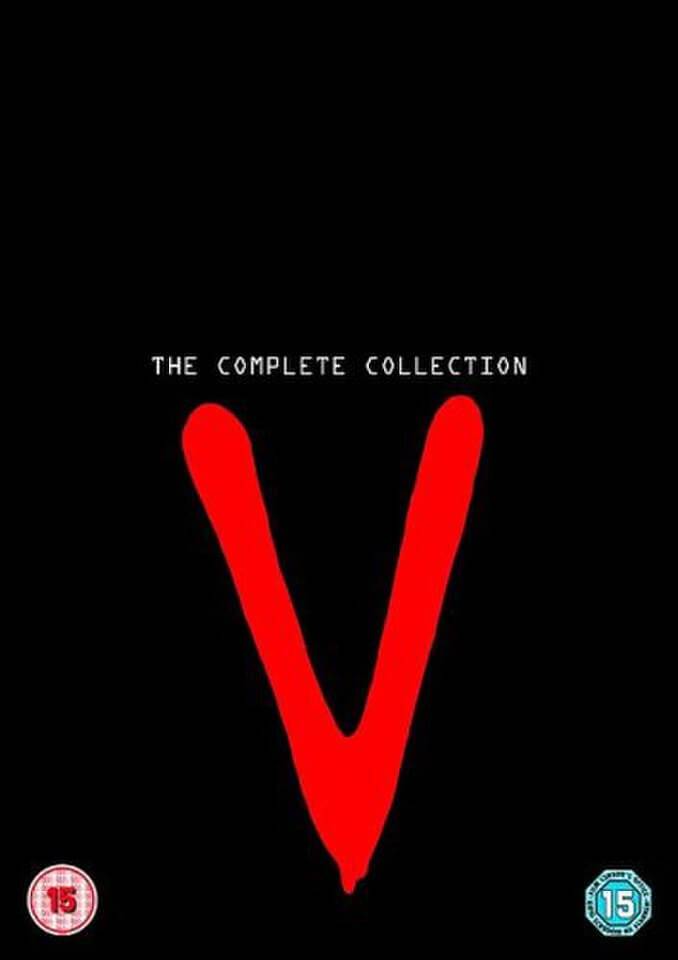 The science fiction series V exploded on to television screens in the 1980s, quickly becoming the biggest sensation to sweep the nation, and depicts a realistic world where aliens have invaded our planet. This complete collection box set begins in the aftermath of the original V mini series and the Final Battle, and features 19 episodes starring Marc Singer, Jane Badler, Michael Ironside and Jennifer Cooke amongst others.

The science fiction series V exploded on to television screens in the 1980s, quickly becoming the biggest sensation to sweep the nation, and depicts a realistic world where aliens have invaded our planet. This complete collection box set begins in the aftermath of the original V mini series and the Final Battle, and features 19 episodes starring Marc Singer, Jane Badler, Michael Ironside and Jennifer Cooke amongst others.

I bought this collection as. I had them on video and wanted to replace them with dvd wasn't disappointed the collection contained all that was released on video before and even the TV series which was not available before on video, I am looking forward to watching all the collection again.

A great series that anyone interested in aliens should watch

I've reminisced about getting the 'V' box set for a while, and I wasn't disappointed. Especially with the upcoming Independence Day Resurgence release I needed to see some big alien ships. It was good to see Robert Englund in a role other than Freddie Krueger, I've watched the mini series upto now, and I'm looking forward to seeing the rest. The complete series came in a nice glossy box that looks brilliant on my shelves, there are 3 separate DVD cases inside including the original mini series, the series, and the End Battle. The CGI is quite dated but it didn't disappoint the enjoyment.

Great show, bought as a present. So I do not know yet.

great service, items arrived on time and as described

The premise of this series is one that's been covered by many authors along with numerous TV and movie productions. However, V is special in that it defines quite an extensive cast and provides a good depth to the characters and their actions with the aliens behaving consistently 'different'. Although much of the effects, props, language and clothing is heavily dated now (because we all know aliens wear conspicuous uniforms and ski goggles) the story is still very gripping. I first watched this when I saw the early episodes of the reboot series and found it was based on a previous show. Having managed to watch the original mini-series I wanted to see it to the end. This set gives you everything and is well worth a viewing before watching any of the new series. While it gives the plot away a bit it does help with understanding some of the bigger plot twists that occur. All in all highly recommended for anyone wanting a good dose of retro sci-fi.

this box set was a birthday present for a friend. it went down very well.

Whilst the acting is slightly corny, and some of the story lines are somewhat short, overall this series is a classic show. The main storyline was well thought out and is well worth watching if this is your kind of genre and generation. I gave it 4 stars because the storylines have more holes than swiss cheese, but for the cost, the viewing time will keep you occupied for weeks and leave you wondering whether it was time well spent. My personal oppinion is yes, I'm glad I've watched some of this and look forward to finding the time to finish watching the rest. I'm also glad to get the opportunity to watch the origional to the V series as I also want to see the new version that is now available and will enjoy comparing story lines for the two.

I have been promising myself the DVDs of this series for years, then hearing that there is going to be a remake (to be shown in 2010) I decided that the time was now. The box contains: V - Mini Series (1983) V - Final Battle (1984) V - Complete Series (1985) - 19 episodes (though only 18 were originally shown in the UK) This was one of those programmes that when I was younger I used to stay up late for. Created by Kenneth Johnson, it was something completely different to anything else on TV - remember this was the time of Dallas and Dynasty. *** Possible Spoilers *** *V* It starts with a number of spaceships arriving over various cities around the world. The "Visitors" - who appear to be human - are lead by "John" (Richard Herd) and his Second in Command "Steven" (Andrew Prine), along with Science Officer "Diana" (Jane Badler). They "come in peace" or so they say. They offer cures for cancer, and other diseases, but never come up with anything. Journalist Mike Donovan (Marc Singer) smells a rat (or something similar) and decides to launch his own investigation into these friendly Visitors, getting what he finds to the public proves difficult and makes him a wanted man. Meanwhile Dr Juliet Parish (Faye Grant) and some of her colleagues have become disenchanted with the visitors seeming inability to come up with the cures they promised, and the way that are taking over. They launch a mini underground movement to undermine the Visitors. As time passes they come into contact with Donovan and the truth starts to come out. *The Final Battle* We are introduced to Ham Tyler (Michael Ironside) and his sidekick Chris Farber (Mickey Jones) who are the men that the US Government turned to when they needed someone to do the dirty work. They hook up with the resistance and finally give some military planning to the fight against the Visitors. *The Series* Follows on from the Final Battle and introduces new characters such as Kyle Bates (Jeff Yagher), Nathan Bates (Lane Smith) and Elizabeth (Jennifer Cooke) as well as continuing on with already established characters. *** End of Possible Spoilers *** Interestingly, a viewers pole done at the time of the favourite characters of the shows (both mini series and the episodic series) threw up a surprise for the studios - they had expected Juliet and Donovan to be top with Kyle Bates (Jeff Yagher) and Diana (Jane Badler) also in the top 5. What they hadn't expected was the top two to be Willie (Robert Englund) and Ham Tyler (Michael Ironside) - both actors, at the time, were mainly known for bad guy roles. The cancellation of the series came a somewhat of a surprise, especially as it was doing so well in the ratings. So sure were they that they would be renewed that scripts had been completed for season 2. Yes, the scripts and back stories had some problems and holes; and some of the special effects look a little dodgy in comparison with the current CGI effects, but it's still a great series. I haven't regretted my purchase. In fact I have thoroughly enjoyed revisiting this series from my youth - unlike many I have returned to this one has lived up to my memories of it.