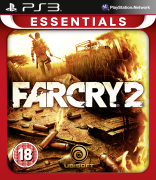 Rise of the Tomb Raider

*Product note: This game does not have Spanish speaking language

The biggest first-person action series of all time and the follow-up to last years blockbuster Modern Warfare 2 returns on November 9, 2010, with Call Of Duty: Black Ops.

Call Of Duty: Black Ops will take you behind enemy lines as a member an elite special forces unit engaging in covert warfare, classified operations, and explosive conflicts accross the globe. With access to exclusive weaponry and equipment, your actions will tip the balance during the most dangerous time period mankind has ever known. 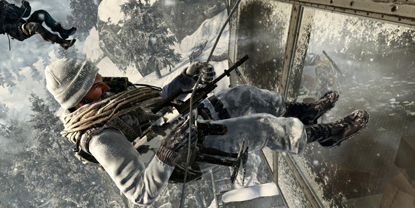 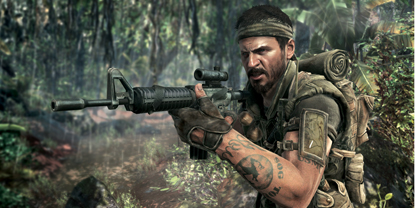 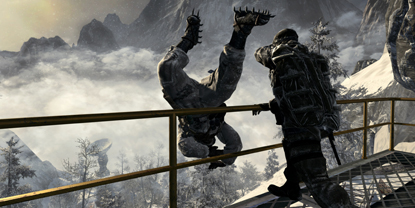 *Product note: This game does not have Spanish speaking language

The biggest first-person action series of all time and the follow-up to last years blockbuster Modern Warfare 2 returns on November 9, 2010, with Call Of Duty: Black Ops.

Call Of Duty: Black Ops will take you behind enemy lines as a member an elite special forces unit engaging in covert warfare, classified operations, and explosive conflicts accross the globe. With access to exclusive weaponry and equipment, your actions will tip the balance during the most dangerous time period mankind has ever known.

I was never a big fan of the Call Of Duty series, until this came up. I'm still not really into the original Call Of Duty online-Multiplayer though. The main reason why I purchased Black Ops, was for the zombie mode. It's just mind blowing fun.

the is only one con about this game is it kills time in the morning until something good is on tv to watch other than that it aint worth wasting your money on this game is crap if you shoot an enemy it does nothing to them but they can kill you with the same weapon now how is that fair enemy can sneak up behind you and never be seen on the map in bare bones games how does that happen when there are no perk...s in bare bones games how does other players get more life span than everybody else it you think this is not true you don't play the game or either you have downloaded a bunch of cheats that no one else knows about its like you play against the computer on steroids how is that fair this not a fair player game for all participants it also says that they will put you in matches that are against players with the same game ability but that don;t happen either this game is not a good Read more Less

As a Call of Duty fan of the first hour (was a beta player of the first call of duty at the time), Blacks Ops didn't seem to be the best game of the series. Lots of people were a little disappointed graphics wise (particulary on the multiplayer part where less distraction is than in the singleplayer mode). Although never think the graphics are less good. It's just a slightly different style compared to Modern Warfare (which I think is still the best multiplayer game of the series). The plot and the singleplayer though are much better than any other Call of Duty I've previously played. What is also better in the muliplayer are the balace of the game. BEWARE! there are slight differences between platforms. On ps 3 you have 1 minute between matches, on pc version only 10 seconds! So think very well what you wish for. So : Singleplayer 5 stars+ Multiplayer : 5 stars+ OVerall : Must buy it! 100%

So, your bored and want a game to dominate, pass the time or simply have fun with. This game falls into all three of these categories. Although the game was set out to be different to other Call of Duty series, this game couldn't help but seem "Samey". The feel of the game feels near on exactly the same, as if it was just an addition to the series for the new maps/gametypes/guns etc. Having this been said, the new content is somewhat improved. First of all, the maps are distinctive. Each map has its own uniqueness as well as some insane graphical effects. You can play for a month and not know every hide spot, which I feel is a massive improvement on the last game in the series, Call of Duty: Modern Warfare 2. The game types have been multiplied by each game of the series, and Call of Duty: Black Ops has not failed to continue this trend. The biggest one from the media was "Gun Game" as part of the new "Wager matches" which is a lovely addition to the game types. Speaking of Wager Matches, there is also a new money system that has been implemented. You have to buy your perks, guns, attachments and everything else each time you prestige (If you chose to). This is either somewhat irritant, or some people would say somewhat fair. It lowers the rate of which hardcore gamers get "Everything Before Everyone", making it more friendly on newer players. So over all: If you have played other CoD Games in the past, prepare for an improvement, but don't expect the most ground breaking thing of the year. If you are new to the FPS Scene, or the CoD series, its a must buy!

A major step up from previous games....

This game does nearly everything right. Offering a good campaign mode and an excellent online mode. The game does not particularly look exciting in terms of graphics, but the gameplay itself makes up for it. There are as usual an excellent selection of multiplayer modes, with the addition of "Combat Training". This new mode allows you to simulate an online multiplayer game but instead against the computer, allowing you to practice, rather then going straight online and getting slaughtered. The multiplayer generally seems more balanced, with a mixture of weapons, seeming to rely more on learning the skills of the game than choosing a great weapon to just obliterate your opponent like previous games. The only downside for me is the amount of maps, there just doesn't seem enough but obviously this will change when the new map pack/map packs are released over the next few months.

Good, but could be better

The single player campaign is brilliant and genuinely immersive. The characters encountered within the story don't seem to be wooden and are likeable. Also, zombie mode is quite fun and adds to longevity of the game. The only downside to the game is that there is no mode within the game that compares to modern warfare 2's special ops mode that made co-operative play that bit more enthralling.

I call this the best game ever!

This was a purchase i will never forget. As a massive Call Of Duty fan, i have to say that the storyline is quite good, and the cut scenes are interesting as you can sort of look around while they are happening, giving an increased element of realism. Overall this is a game you must purchase.

I have had black ops for a while now and i think it is amazing everything looks very realistic. The campaign is a fun-filled adventure through vietnam, russia and various other places, online there are wager matches where you can gamble your cp that you have earned. There are four wager matches i have not got time to go through them thoroughly but they are; one in the chamber, sticks and stones, gun game and sharpshooter. There are awesome maps i recommend firing range, nuketown, cracked, jungle, crisis and havana. they have also brought back zombies which was a huge success in call of duty: world at war. you can also play zombies online with upto 3 other people.

I GOT THE GAME A FEW DAYS AGO AND IM LOVIN IT, I CANT STOP PLAYIN IT.ALSO THE CAMPAGHN HAS HAD A MAJOR IMPROVEMENT!!!GOOD I NEVER LISTENED TO THE BAD REVIEWS!!!!!

This incarnation of the popular series not only provides better game-play and graphics in a totally new era of war, but also provide and excellent amount of content and variety (Single Player, Multi-player, Wager-matches, Theater Mode, Combat Training, Zombies and Dead Ops Arcade). Extremely worth the money for the content you receive and as a plus it is all good quality features.