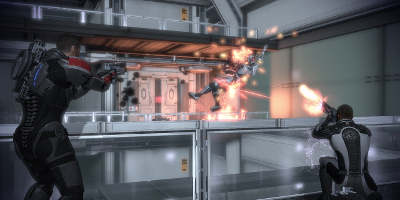 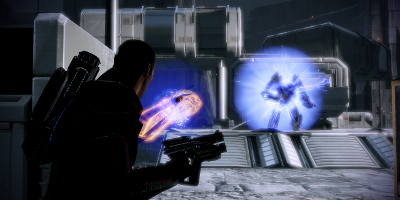 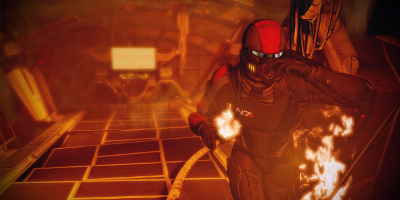 I really like Mass Effect 2. Why 4 out of 5 stars? Well, there are a few drawbacks for me. But let me enumerate its highs and lows. Since it's RPG, there are plenty of dialogues, characters to meet, decisions to take (and these affect the story), abilities to learn and weapons to upgrade. Upgrades are related to the 1st drawback in my opinion - scanning planets trying to find resources (especially Element Zero) gets boring pretty quickly. Sadly, you can't avoid it unless you don't need better gear (which would be odd). The characters are great. They're made really well - Miranda looks like a real person (thanks to great character artists and facial animators). Missions? There are plenty - 28 main ones and even more side quests (some are really short though). And if you buy all possible DLCs (like I did), you'll get even more play time. Another noticeable fault for me is AI. Your team acts strangely, taking cover for half a minute shooting everything that moves and really helping you, and for no reason leaving the cover, going into the action like Rambo and dying (you can heal them, so no mission fails due to that). But all in all, without those guys you wouldn't survive for long, not only because there are serious shootouts in the game with tough enemies to destroy, but because your crew has really good powers that improve the game play. The best thing is that you can control those powers, so there is some strategy in the game. But these 2 things I mentioned are the biggest drawbacks for me.

Great game. I was missing the micromanaging of your equipment, which the first part had though. But great game never the less. Just bought it now, because played it originally as a loaned copy. Got to have it on my shelf!

Fantastic sequel to one of the best XB360 games available!

Mass Effect 2 is a huge game. The main story is excellent and very long. If you like 3rd person shooters, you will love this game.

First thing you notice about ME2 is the improvement to the graphics in the initial sequence. Bad graphics don't take anything away from a game but good graphics definitely add. I won't go into details but if you have played ME the first 5 minutes of ME2 will have you hooked again! I am only 15 hours in but I am back in the world I feel comfortable in, when I say 'world' the environments etc are nice but its the characters that make the game and the interactions that you have with them and how these interactions pan out. ME is famous for being a game where your actions affect the game and the conversations can be thoughtful and adult themed, which is refreshing. Some of the game mechanics have changed such as combat which I can take or leave, ME1 & 2 both have fine combat but overall this feels like a slicker/prettier iteration but the core elements of this wordy game are the same and that's a very good thing. I have given 4 stars as I think at 33 years of age I would have given maybe 3/4 games 5 stars in my life and I feel the same about movies perfection is rare. If you want to immerse and engage with a game this is worth your time and cash.

As a huge fan of both RPG's and Sci-Fi epics, there simply isn't a bad thing to say about Mass Effect 2. It excels in almost all aspects compared to its predecessor and I can assure you that you will not be disappointed with it. The Cerberus Network code included in the purchase also adds some longetivity to the game by providing additional missions free of charge!

I would recommend Mass Effect 2 to any one especially if you like Bioware games, third person shooters or RPG's, the service was excellent and the product was delivered before the scheduled time.

even better than the first.

While the first Mass Effect was considered a great game, this game is what really drove the series to its acclaimed place in the video games world. The gameplay could be easily divided into two categories, the first is a 3rd person squad shooter, and its a real good shooter. the second main part of the gameplay is the personal choices you make via conversation. Each time you talk to someone in the game, at least someone important, you get to pick what kind of a response would Shepherded gives. Thesse choices actually effect your game. the story is better than the first game, in my opinion there is a lot to do, and there are many mini-games to fresh things up. overall, it is not surprising this has been considered one of the best video games of all times. If you have an X-box and haven't played the first game, buy it before playing the second or third installment. If you own a PS3, you'll have to start here. When taking youre own character from the previous game, the main thing you take are the choices not the abilities who could be changed. The ending for this game is great, anything else is spoilers.

Excellent Game, main story is fantastic and the aside missions will keep you entertained for hours.