In early 1994, director Kevin Reynolds called Steven Spielberg. Reynolds was prepping for his ambitious new movie Waterworld and keen to seek advice from the man who’d made Jaws.

“Do I want to shoot on the water?” Reynolds asked. “You might,” Spielberg replied. “I’ll never do it again.”

By June that same year, Reynolds was shooting on the water, in the throes of a colossal, $175 million action-spectacular production just off the coast of Kona, Hawaii.

The lead actor was his Robin Hood: Prince Of Thieves star Kevin Costner, and the shoot involved the largest floating set ever built, over 10,000 props, more than 50 stunt performers, and a whole heap of problems mounting from day to day. 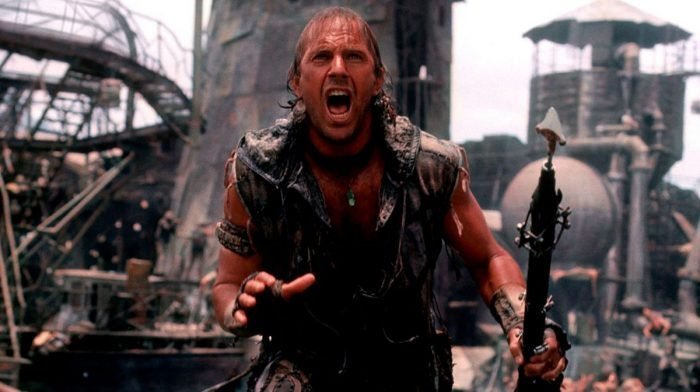 After his scheduled 96 days passed, Reynolds was still shooting on water, with the production dragging on for another 70 long, wet and often windy days.

Meanwhile, the media enjoyed a feeding frenzy, delighting in every bad piece of news that leaked from the closed (but far from watertight) set, including stories of sinking sets, crew injuries and demands from Costner that VFX be used to hide his thinning hair (which the star aggressively denied).

That, and “Fishtar” (a reference to another infamous flop, Ishtar). Reynolds and Costner’s mega-movie was, it seemed, a brine-marinated turkey before it had even wrapped. But, looking back on it 25 years later, was it really that bad? 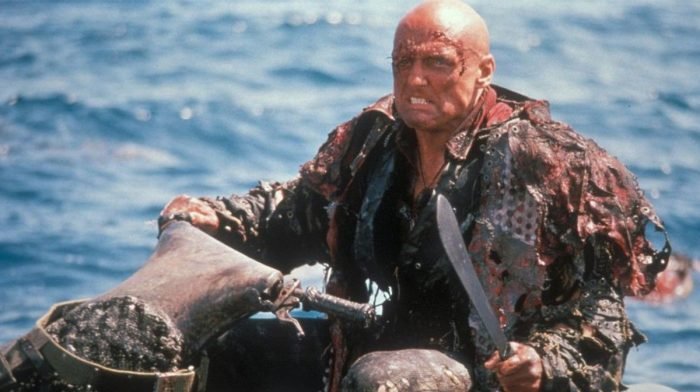 Ironically, Waterworld began life as a pitch for a low-budget Mad Max ripoff.

During the mid-’80s, Roger Corman’s New World Pictures was keen to cash in on the popularity of George Miller’s diesel-drenched post-apocalyptic series, figuring that a wardrobe of rags and backdrops of rusted junk would make for comfortably low overheads.

They asked writer Peter Rader if he had any thoughts. “How can we spin this in a different direction?” he pondered as he walked along a marina one day.

Suddenly it hit him: “Why don’t we do Mad Max on water!?” New World virtually laughed him out of the room. “Are you out of your mind,” producer Brad Krevoy told him. “That’s gonna cost $5 million!” 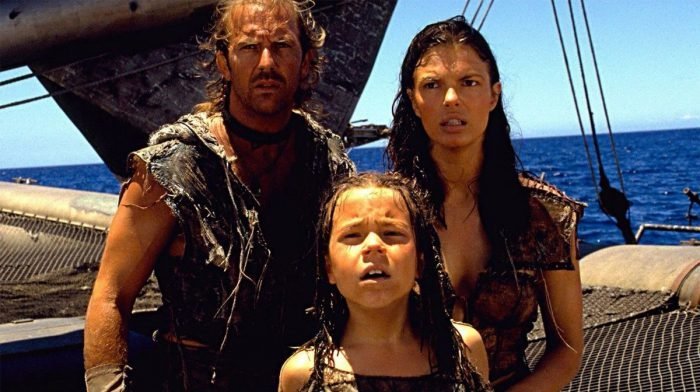 It would cost a hell of a lot more. After Rader wrote the script, envisioning a future world where melted ice caps have reduced humanity to struggling, boat-based tribes, it eventually ended up on the desk of A-list star Kevin Costner.

He loved the concept, and particularly connected with the main character of the Mariner: a nameless, highly capable loner who reluctantly saves the day – just like all those classic Western heroes the actor worshipped.

Costner thought it would be a great project to make with Kevin Reynolds, who he’d known since film school, even though the pair had fallen out while making their last film, Prince Of Thieves. 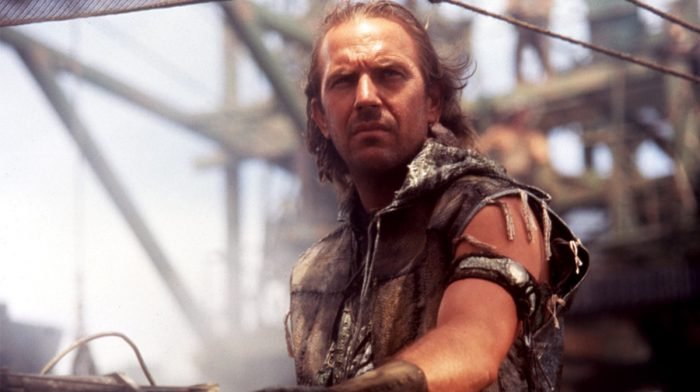 As it turned out, Reynolds had already read and loved the script, and was particularly drawn to its Planet Of The Apes ending, where the once mythical, newly discovered Dryland is revealed to be the peak of Mount Everest.

It took a little arm twisting, but he was convinced to reunite with Costner. Now, improbably, that little Mad Max rip-off was a Universal Studios summer blockbuster-to-be.

“Suddenly we we’re now on steroids,” Rader recalled. “That’s when things started to get really crazy.” 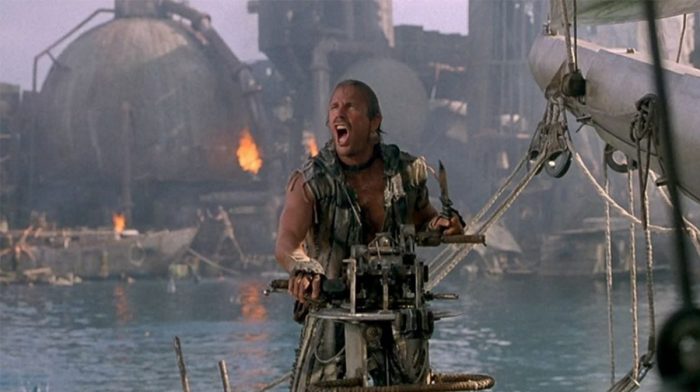 Waterworld’s B-movie roots have a lot to do with its enduring cult appeal. It’s an odd fish, if you’ll excuse the phrase.

It has the feel of a cheesy but fun, straight-to-video sci-fi film, complete with a gritty Western flavour and a terse, Eastwood-esque anti-hero in the form of the Mariner, whose treatment of the Dryland-searching Helen (Jeanne Tripplehorn) and mysterious 10-year-old girl Enola (Tina Majorino) is often downright brutal.

It really is not typical blockbuster material, which so often feels diluted to achieve the broadest appeal.

It might have been even darker: Reynolds turned in a cut that was deemed too harsh (and too long) by Costner and the studio. 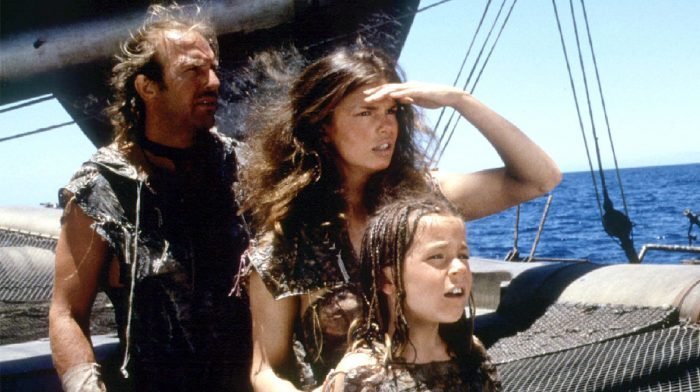 When Reynolds quit the film in post-production, Costner took it on himself and brightened it up, replacing Mark Isham’s moody compositions with a big, swashbuckler-friendly score by James Newton-Howard that’s so energetic it’s almost exhausting to listen to (Costner also excised that big-reveal ending, much to Reynolds’ disbelief).

But when it comes to the action and spectacle, it certainly is blockbuster material, all the more impressive for being mostly shot live, with practical effects, on real water.

“The scale was enormous,” Reynolds told Newsweek in 2015. “Especially the giant floating set, the Atoll. We had hundreds of extras, dozens of guys on jet skis, and helicopters with cameras on them.” 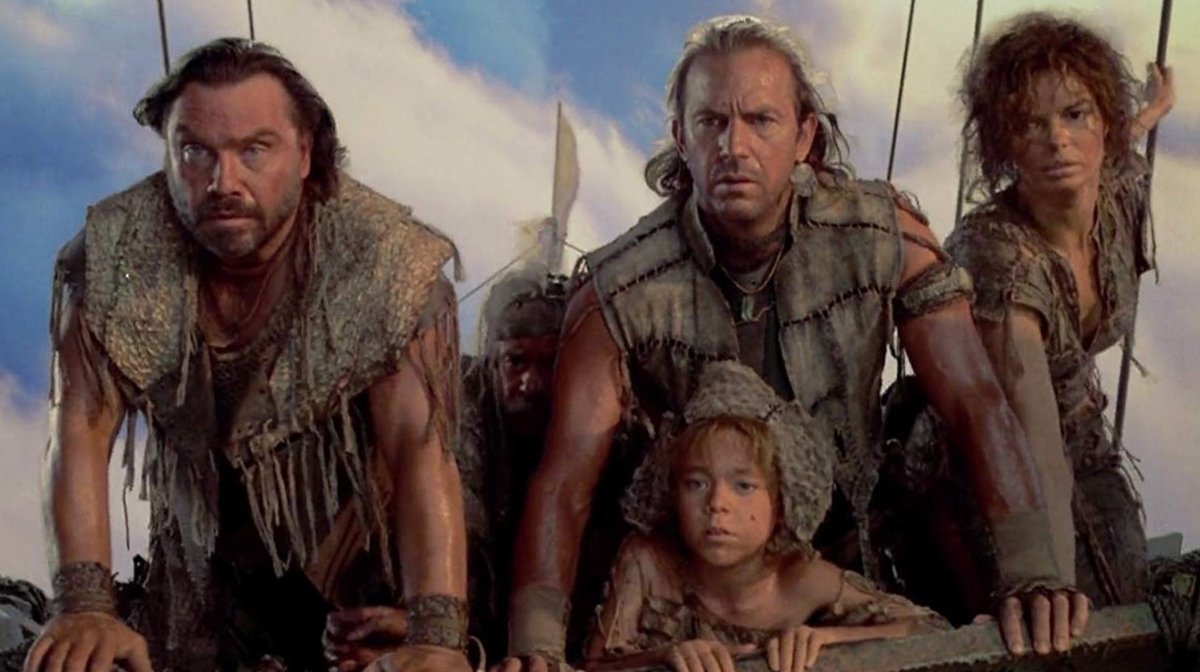 Given the dominance of entirely digital environments in today’s movies, the movie has a bracing, visceral feel. Although it came at a physical cost to its participants.

The news reports were often exaggerated. A floating set did sink in a hurricane, for example, but it was one of the smaller ones that only briefly appears in the film, not the colossal Atoll.

Yet it was an incredibly tough production. Resetting between scenes took hours out on the water, while the weather usually turned impossibly blowy in the late afternoon, creating 12-foot swells.

Seasickness was common, as were jellyfish stings. Even the star was not immune to suffering. In fact, for one scene he was placed in very real mortal danger. 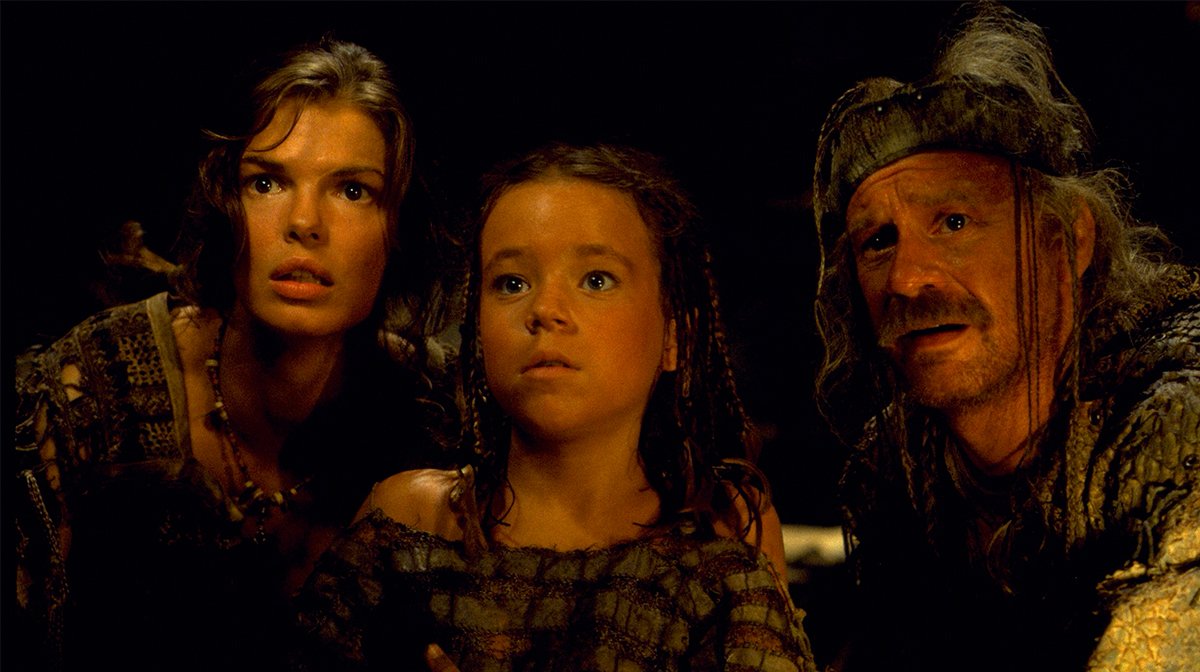 For a hero shot of the Mariner standing high up on his trimaran’s 85-foot-tall mast while the sun set, Costner had to do it for real, tied high atop the custom-built boat while Reynolds filmed him from a helicopter.

But a fierce gale blew up, pushing the vessel further out to sea than anticipated while Costner was swung wildly from side to side with no way to untether him safely.

“The boat really started to rock,” recalled Reynolds. “And he’s getting whipped around up the top of this mast. Understandably he was not happy.”

It took two hours before Costner could be rescued, as the trimaran had to be sailed all the way around to the island’s lee side, where it was finally calm enough to get him down 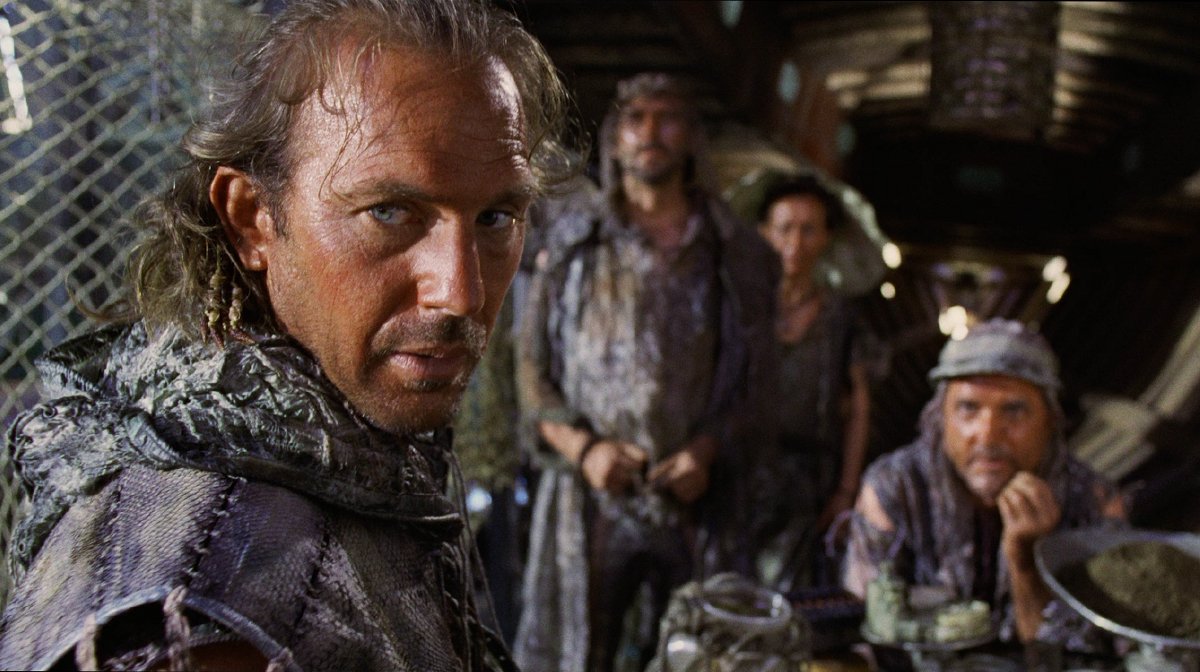 The storm in the press, however, didn’t abate. Reynolds and the producers felt their movie was being undeservedly maligned, right
through to the reviews on release in July 1995.

Universal honcho Lew Wasserman said to Reynolds that he believed the bad press cost them $50 million in box office receipts.

To be fair to critics, the film is patchy, with some laughable lapses in logic. The positioning of the mutant Mariner’s gills behind his ears, for instance, or the fact that the evil Smokers, led by an OTT Dennis Hopper, walk around with lit cigarettes in an oil tanker of all places. 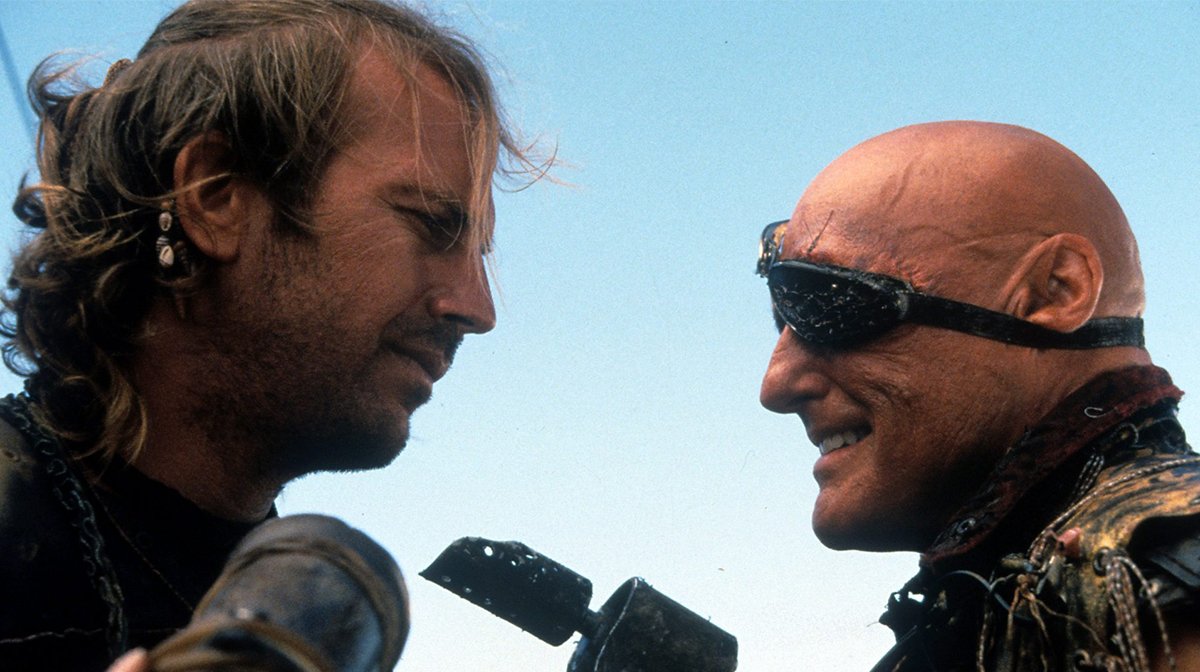 Its final act aboard that tanker (the infamous Exxon Valdez, no less) doesn’t really gel, which is symptomatic of the fact that it was bolted on during post-Rader rewrites, but still not fully fleshed out even after the shoot started.

Joss Whedon was helicoptered in to fix it up, and spent seven miserable weeks trying to do so. “I accomplished nothing,” he later admitted to The AV Club.

Yet not all the reviews were negative. “Waterworld is a pretty damn good summer movie,” admitted David Ansen in Newsweek.

And, while it was not the swim-away success Universal had hoped, it grossed $264 million worldwide and spawned a hugely popular live stunt show at Universal Studios. As flops go, it did rather well. 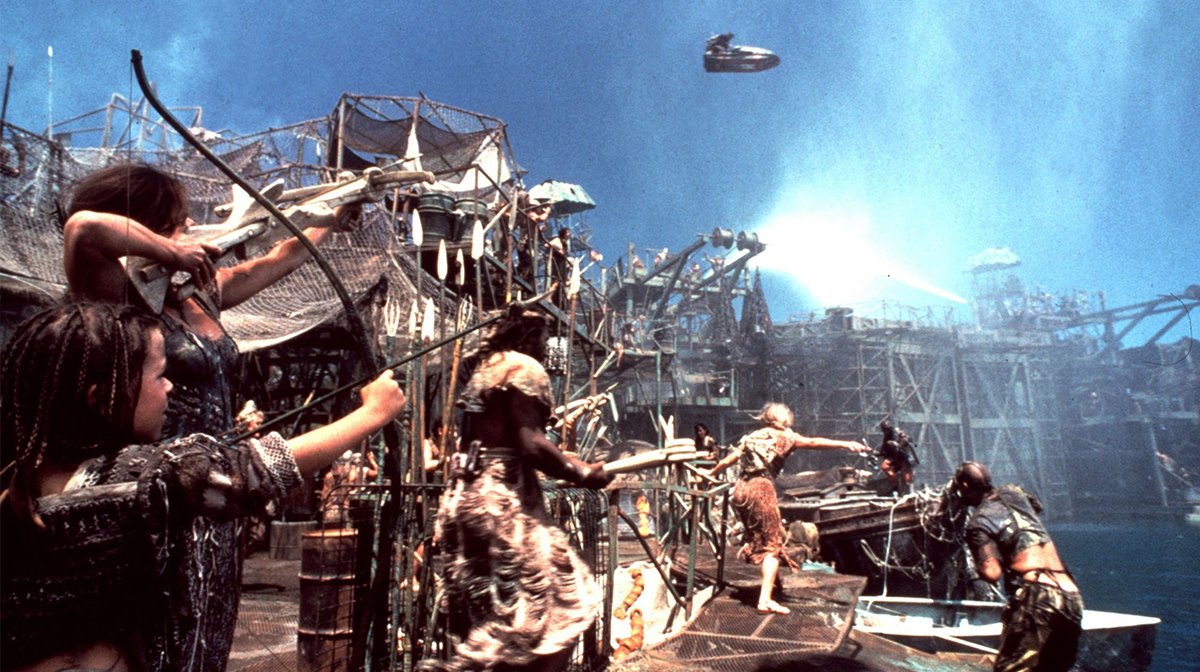 It was quite prescient, too. Reynolds saw it as an “eco-fable”, a warning of what might come if we don’t take better care of our planet.

The reason for Waterworld’s ice-cap-melting is never revealed, but with global heating causing real sea levels to rise almost three inches since the film was made, our world has edged just that little bit closer to its fanciful nightmare vision.

“That’s the reason Waterworld has endured in the imagination,” Rader thinks. “It’s this cult movie that set up this essential theme of the future survival of this planet.” 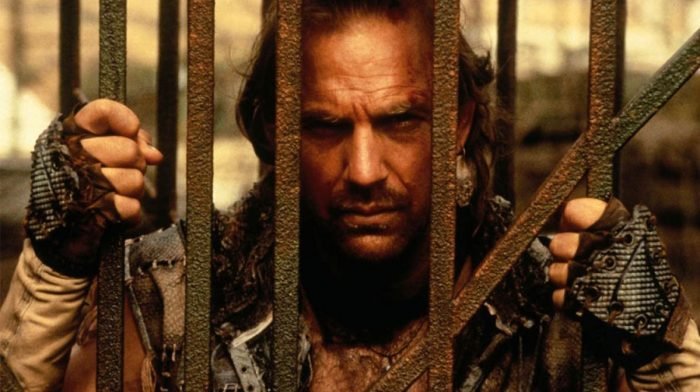 Just as Spielberg never shot at sea again, Reynolds stuck to dry land for the rest of his career (including a surprising reunion with Costner on Western mini-series Hatfields & McCoys in 2012).

In fact, so has virtually every big production since, including the splashy likes of Aquaman and The Meg. After Waterworld, Hollywood clearly had its fill of water.