The first trailer for Shang-Chi And The Legend Of The Ten Rings has finally been released, giving us a glimpse at what to expect from the upcoming movie.

As part of Phase Four, the Marvel Cinematic Universe (MCU) is stepping into a new world as it focuses on hero Shang-Chi, also known as the Master Of Kung Fu.

Of course the MCU is no stranger to action, but with Shang-Chi they are entering a different realm, something we get a teaser of in the trailer which is heavy on the martial arts and Wuxia cinema inspiration.

Simu Liu stars as Shang-Chi, Marvel’s first Asian superhero, who goes on a journey which sees him come face-to-face with the Ten Rings and their leader, The Mandarin.

We have encountered the mysterious Ten Rings organisation before in the MCU, most notably in the Iron Man series, but it looks like we will finally meet the group for the first time.

And that’s not all you can expect, as the trailer sets up quite the adventure. Let’s break it down. 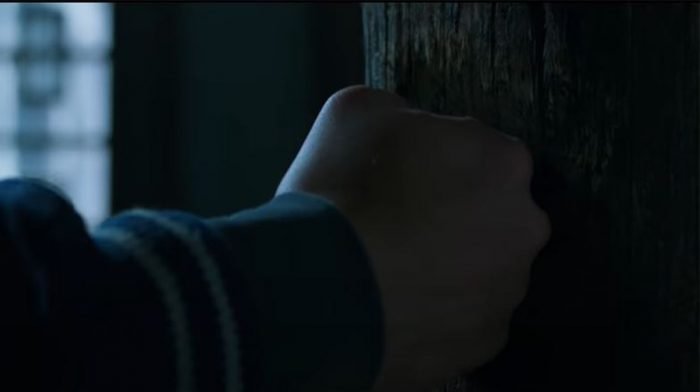 The trailer opens in a temple as thunder grumbles outside. Here we first meet Shang-Chi as he gazes at a wooden post which has clearly been put through the wars.

Shang-Chi throws a half-hearted punch into the dent, which is a similar size to his fist. The implication here early on is that this is where Shang-Chi trained when he was younger, presumably by his father Wenwu (Tony Leung).

Ten Years To Live Your Life… 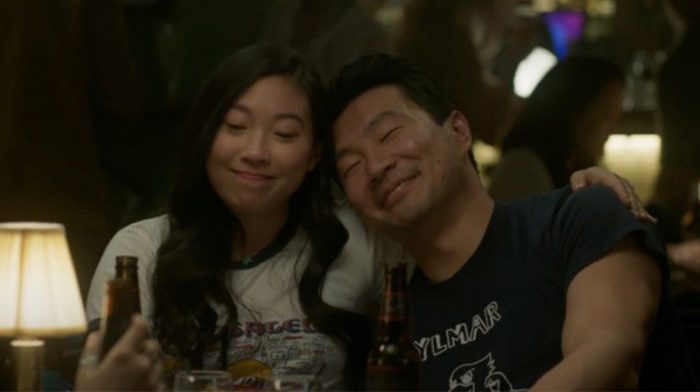 Talking of Wenwu, he narrates the opening of the trailer chastising Shang-Chi saying: “I gave you ten years to live your life, and where did that get you?”

It appears then Shang-Chi’s family is quite unusual, since his gift from his father was a a decade of time to do what he wants in life, presumably before he gets called into action.

And in answer to Wenwu’s question, it appears that our hero has been living humbly, working as a valet at a hotel and staying in a modest studio apartment.

He has also befriended co-worker Katy (Awkwafina), with the two frequenting karaoke bars – a scene we just can’t wait to see! 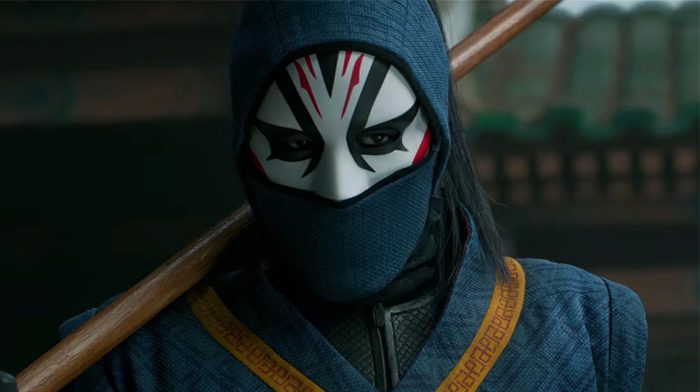 We then cut to a flashback from Shang-Chi’s childhood, which sees him training in the same temple from the opening moment of the trailer with his father watching on.

A masked man known in the comics as The Death Dealer whips him into shape – that name is appropriate considering his terrifying appearance.

A member of The Ten Rings, Li Ching-Lin, a.k.a. The Death Dealer, will be one of Shang-Chi’s enemies in the film, mirroring the vicious rivalry the pair have in the comics. 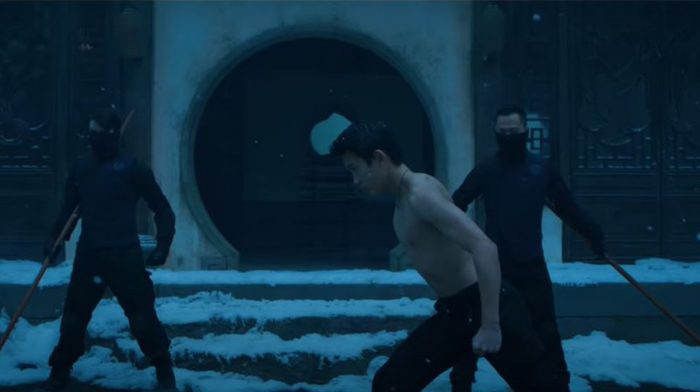 We are then treated to a training montage which sees a teenage Shang-Chi kicking the sh*t out of some ninjas, and just being a bad-ass in general.

Wenwu’s narration continues telling us more about the father-son relationship: “You walked in my shadow. I trained you. So the most dangerous people in the world couldn’t kill you.”

During this flashback sequence we get our first hint that Wenwu isn’t exactly one of the good guys, as he attacks a man in the middle of a restaurant which he took his son too.

A blue light glistens around Wenwu’s fists as he does this, but it’s unclear what this power is. 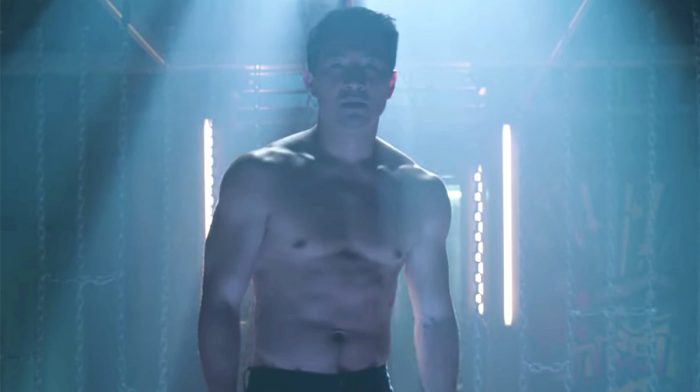 Cutting to a shot of Shang-Chi now, it’s clear he’s still in good shape, and appears to be taking part in some kind of fighting tournament.

A crowd cheers around a cage, and it seems as though Shang-Chi isn’t the only one waiting to enter the arena, with a dangerous looking man watching on.

The Mandarin Is Shang-Chi’s Dad 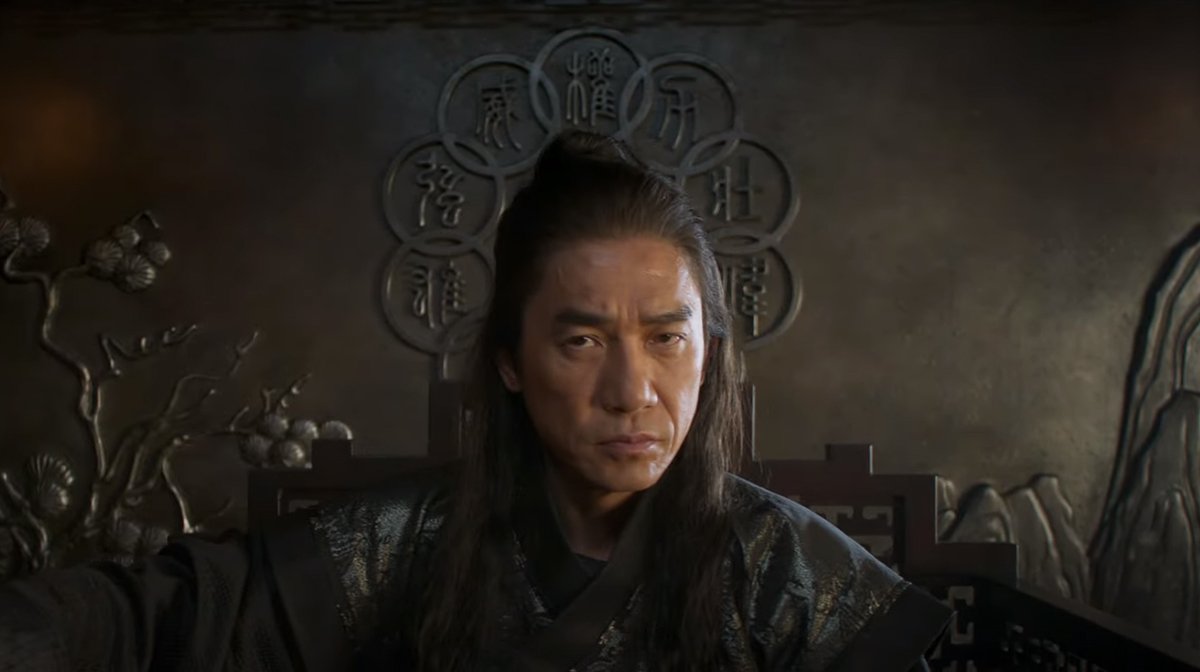 Remember we said that Wenwu doesn’t seem like he’s exactly one of the good guys… well the trailer then reveals that Shang-Chi’s dad is actually The Mandarin, the leader of The Ten Rings.

After a shot of an army surrounding a helicopter emphasises the power of the organisation, we then see Wenwu as the leader, telling his son that “it’s time for you to take your place by my side”.

We imagine this will be the driving force of the story, as not only will Shang-Chi butt heads with his father when he presumably rejects his offer, but others such as The Death Dealer are probably jealous that our hero is seen as a worthy heir to that power, not them. 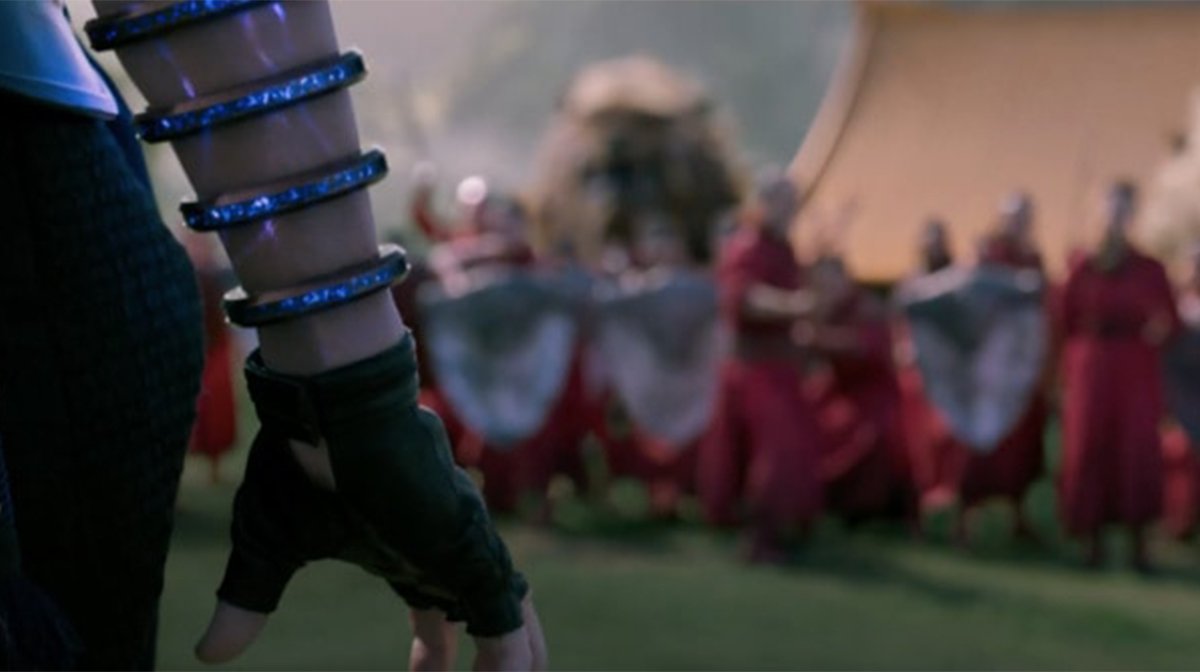 We now learn the source of that blue light we saw Wenwu wielding earlier, as we see someone wear a series of gauntlets emitting that glow – presumably Shang-Chi.

Facing off against an army, the implication is that these gauntlets will help give him power in this battle. The question is though, are they the symbol of The Ten Rings organisation, or are they the magical artifact known as The Ten Rings?

More Than A Martial Artist 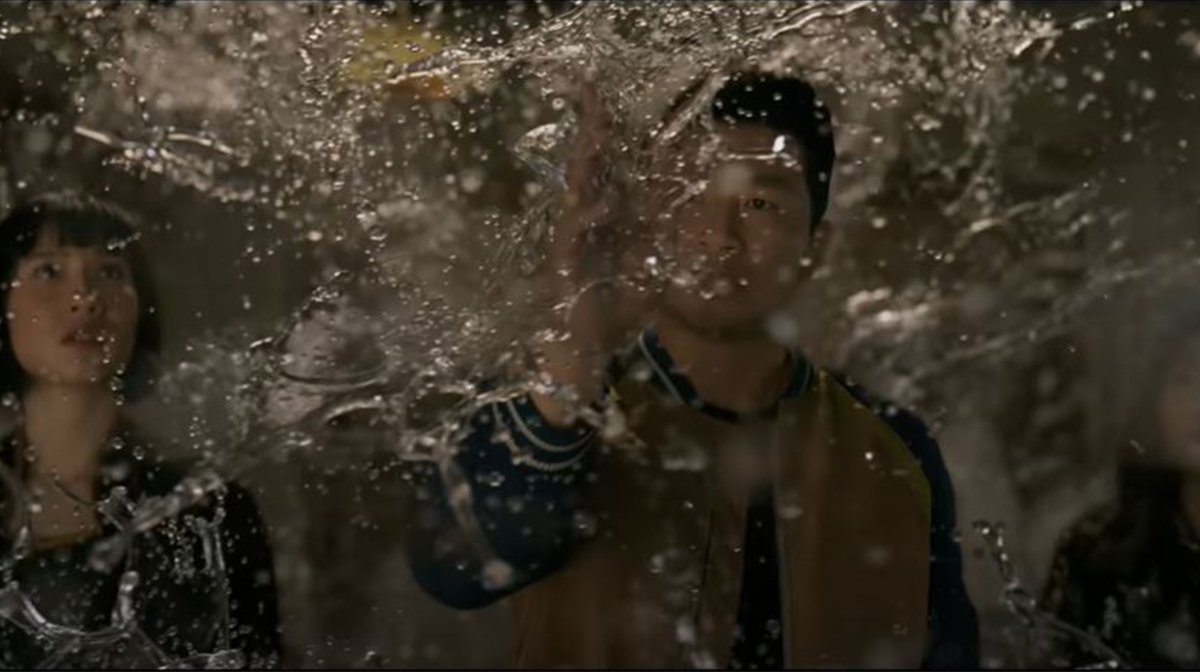 A shot which sees Shang-Chi seemingly manipulate water tells us that his skills are more than just being the top martial artist around.

In the comics he also has the ability to harness his chi to enhance his body and mind, which is maybe what we are seeing here.

During this sequence, we also see our hero telling his father he won’t join him by his side. CUE THE DRAMA!

Bring On The Action 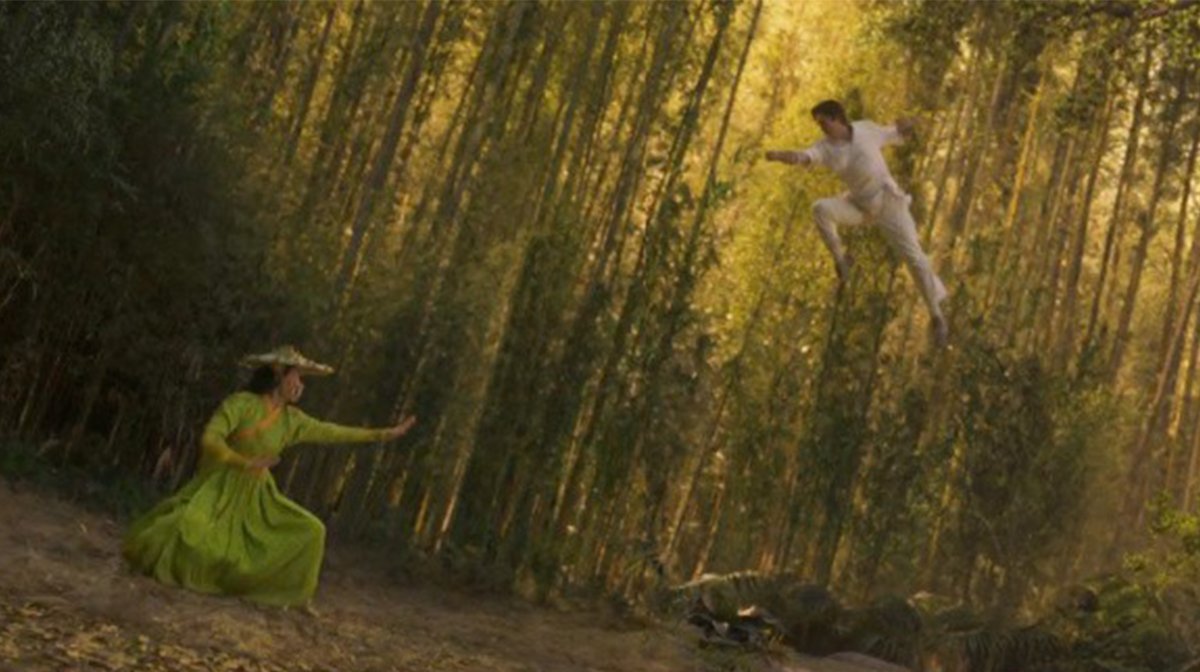 We are then thrown into a sequence of action shots, which showcases the martial arts we will see, as well as the film’s gorgeous visuals.

Here Shang-Chi takes on several figures including the Death Dealer and a character called Jiang Li (Fala Chen). Interestingly in what looks to be a cage match, he then battles his sister Xialing (Meng’er Zhang) who is estranged from Wenwu. Although the siblings have quite the rivalry, it’s likely that they will team up to take on their father.

On a bus Shang-Chi also encounters a man armed with a sword as an arm – he appears to be one of the contestants from outside the fighting arena we saw earlier in the trailer.

This character is Razor Fist (Florian Munteanu), a henchman from the comics who in the film is probably working for Wenwu. 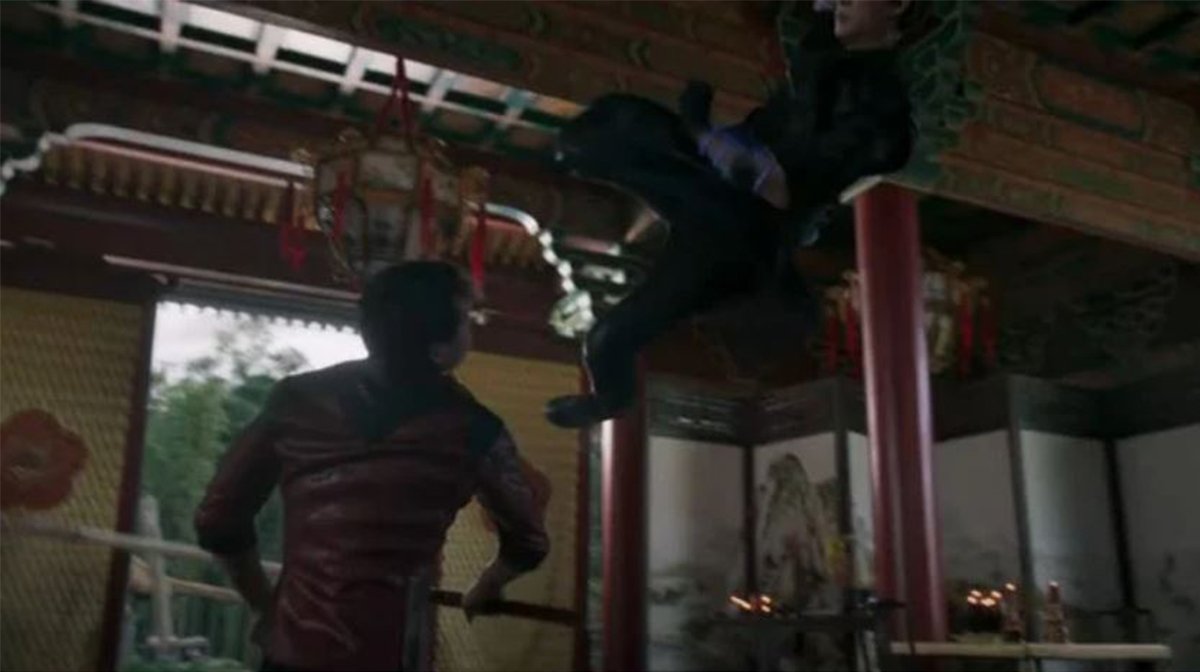 The fighting doesn’t end there, as we then see a big battle taking place at a temple, which is presumably where the final act takes place.

Shang-Chi is dressed up in his full costume, also indicating this is the finale.

You may have also notice what looks to be lions in the midst of this battle. Well they are actually Foo Dogs, creatures from Buddhist mythology which protect sacred sites. 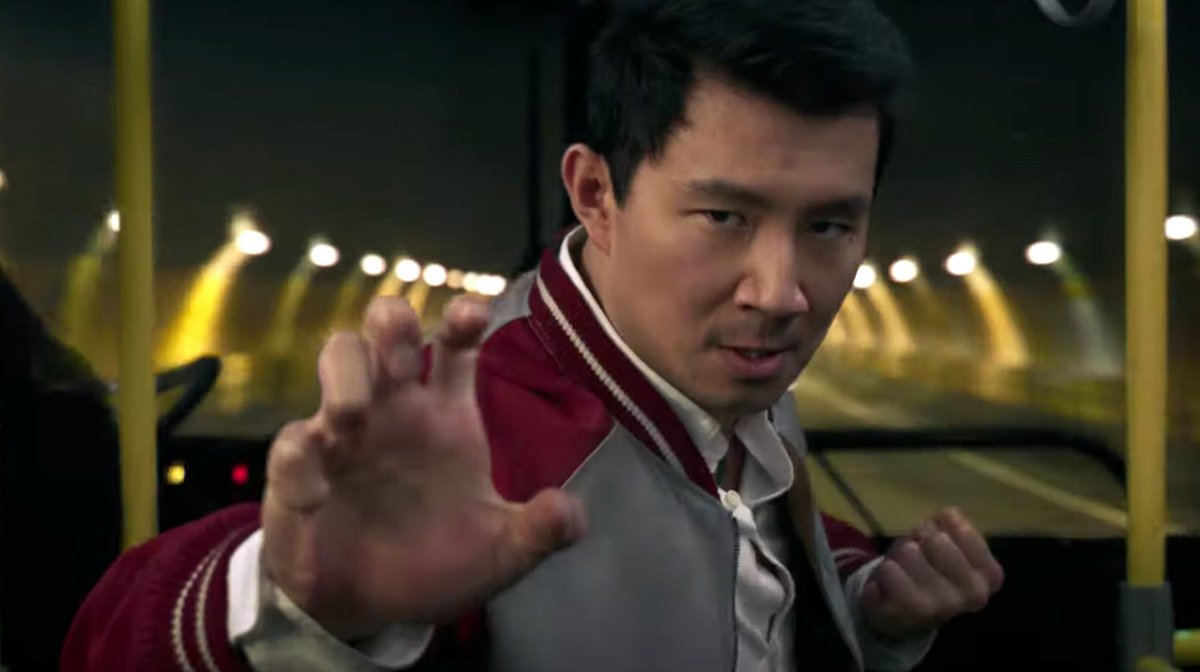 The trailer ends with Shang-Chi back on the bus taking out some goons, which clearly shocks his friend Katy who asks “who are you?”

Well Katy – Shang-Chi tells us exactly who he is as he strikes a pose in the form of his trademark stance from the comics.

Cue the film’s logo, with the trailer then ending on a moment of hilarity delivered by actor Awkwafina of course – she’s clearly here to deliver that all important comic relief.

Shang-Chi And The Legend Of The Ten Rings is scheduled to be released in cinemas 3rd September 2021.