It wasn’t meant to be a rom-com. A cautionary tale, maybe, or a dark portrait of class division, but definitely not romantic, or comedic.

But the makers of what turned out to be Pretty Woman, which hits the big 3–0 today, gambled on doing something different with their modern Pygmalion – and thank goodness they did.

The billionaire-and-the-hooker fable didn’t only turn out to be one of the most popular films ever, it made Julia Roberts a megastar, rescued Richard Gere’s career and breathed new life into rom-coms.

Not that they’d become a rarity from the 60’s onwards, but they had turned bittersweet, more concerned with love’s problems and anxieties, and often laden with irony. And most important of all, they were short on happy endings. 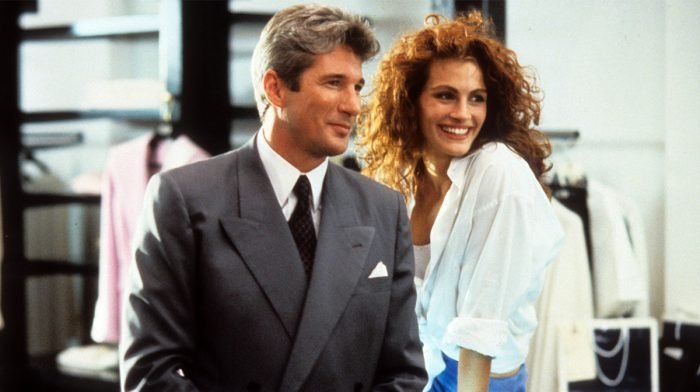 Pretty Woman revived the genre by re-discovering that all essential magic formula – the one that makes you reach for the tissues – yet still managed to preserve some of its original story which is inspired by Pygmalion.

But it’s a fairytale at heart. A Cinderella story, if ever there was one, believing in the triumph of romantic love over whatever stands in its way. Stumbling blocks like wealth and class are set aside in favour of a true meeting of minds, despite the lovers’ differences, and the attitudes of those surrounding them.

It even has a fairy godmother – no self-respecting fairytale should be without one – and that other essential, a transformation scene.

For Vivian (Roberts), the magical intervention comes courtesy of Edward’s (Gere) credit card and those Rodeo Drive stores. It’s retail revenge. Those snooty shop girls (Ugly Sisters) would never serve her as a rule: now they have to treat her like a princess. And she looks like one. 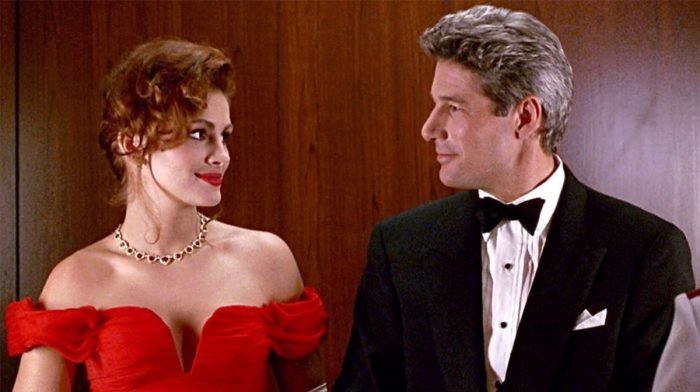 But while Edward comes to her rescue in more ways than one, and the film is a fairytale in 1990’s clothing, he’s hardly Prince Charming.

In the original script, he was even more unlikable, throwing Vivian out of his car in the closing moments and chucking money at her.

Here, he’s improved slightly, but his other talent aside from making money is for spoiling relationships, and his attitude towards women leaves something to be desired. His choice in friends – in fact, we only see one, the sleazy lawyer Philip (Jason Alexander) – isn’t great either.

But he redeems himself with the grand gesture at the end, and even manages to pave the way for future, even more unlikely romantic male leads. Step forward the commitment-phobe, the nerd and the stoner, for starters. 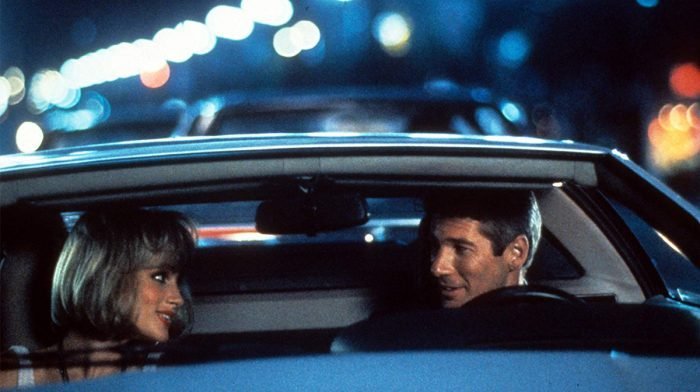 It’s no great surprise, then, that our two ‘star-crossed lovers’ – of sorts – are brought together by a business transaction, prompting Edward’s observation that they both ‘screw people for money’. Not the most romantic of beginnings but, despite what they think, they’re not such an unlikely couple.

She’s a perfect foil for him: the total opposite of the women that convention would choose for him. She’s independent and has the confidence to turn down his apartment, his money and, for a while, him too.

Money still comes into it though, of course, but in a very rom-com way: neither one of them cares much for superficiality like status, designer clothes or a luxurious lifestyle – or, indeed, the awkward fact that one of them is a prostitute. 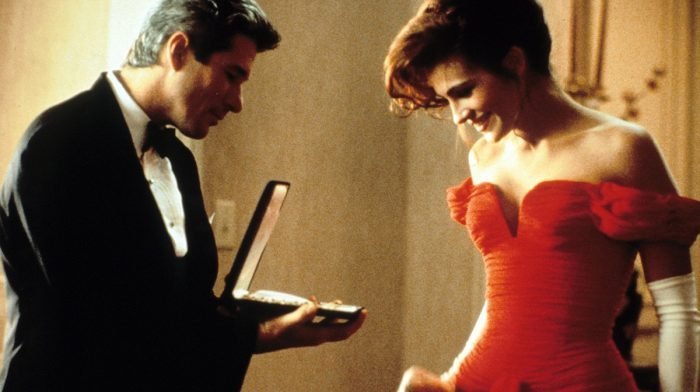 That one particular fact harks back to the original version – originally titled $3,000 – and shows that Pretty Woman wasn’t entirely stripped of its darkness.

Vivian is still a prostitute and, ever since the film’s release, it’s been accused of glamorising the profession. And, while it doesn’t exactly give a multi-faceted exploration of the subject, it does acknowledge the inherent dangers that go with sex work, as well as acknowledging that it’s not the career path that either Vivian or her roommate Kit (Laura San Giacomo) would have wanted.

But it’s not judgemental of their work either, giving the duo an assertive motto to live and work by. ‘We say who, we say when, we say how much’.

We hear less of Edward’s business dealings but, given his attitude to money and his dodgy choice of lawyer, there’s every chance they’re not exactly ethical, to say the least. 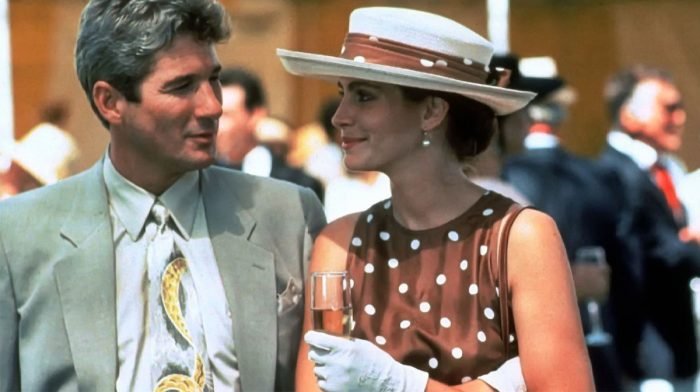 Their respective friends give them somebody to confide in. They’re both rom-com and fairytale conventions, although the nature of those relationships and their effect on the story are strikingly different.

Vivian and Kit’s friendship is hugely positive for both of them, a world away from their working lives: they’re supportive, caring and understanding, and can tell each other anything. True friends, then.

Philip, however, is a business advisor. And, as the closest Edward has to a friend, he sees nothing wrong in inflicting his attention on Vivian after he finds out the nature of her job.

In fact, he’s really there to make Edward look better by comparison, with his attempt to force himself on Vivian played purely as a hero moment so that Edward can rescue her. 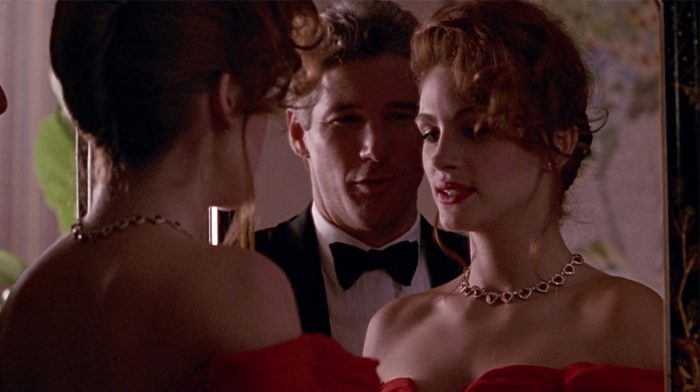 But what they – and we – can’t deny is that the chemistry between them is most definitely there. Without it, there’s no rom and no com.

While Roberts signed up early for her role, Gere was more reluctant, turned it down several times and was only finally persuaded by a personal appeal from Roberts herself. It worked.

His cool, detached materialism and lack of sensitivity – until he learns otherwise – is perfectly matched by her freshness, infectious laugh and drop dead gorgeous smile.

Combined with the talents of the two actors, they created that indefinable something on screen that only the camera can capture. That was 30 years ago, and it’s still there now.