One of the greatest comedy scenes of all time takes place in a local Queens barbershop – hilariously called My-T-Sharp – in 1988’s seminal classic Coming To America as the four friends get into a heated argument about who was the best boxer of all time. 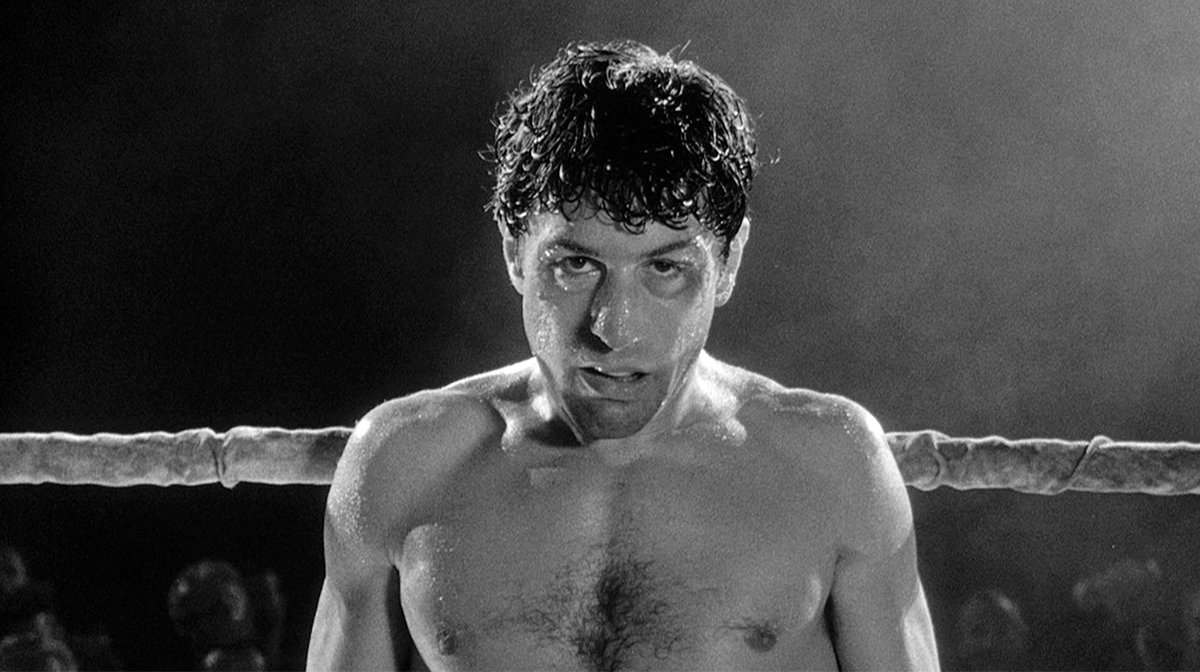 They obviously hadn’t heard of The Bronx Bull. And whilst you may never settle on an answer with friends, there is one thing you can be sure of: Martin Scorsese’s chronicle of The Bull – Jake LaMotta – may well be the greatest boxing film of all time.

Released in November 1980 to initially mixed reviews, Raging Bull has gone on to become one of the highest regarded films in history and, ten years after its release, was the first to be inducted into the National Film Registry. 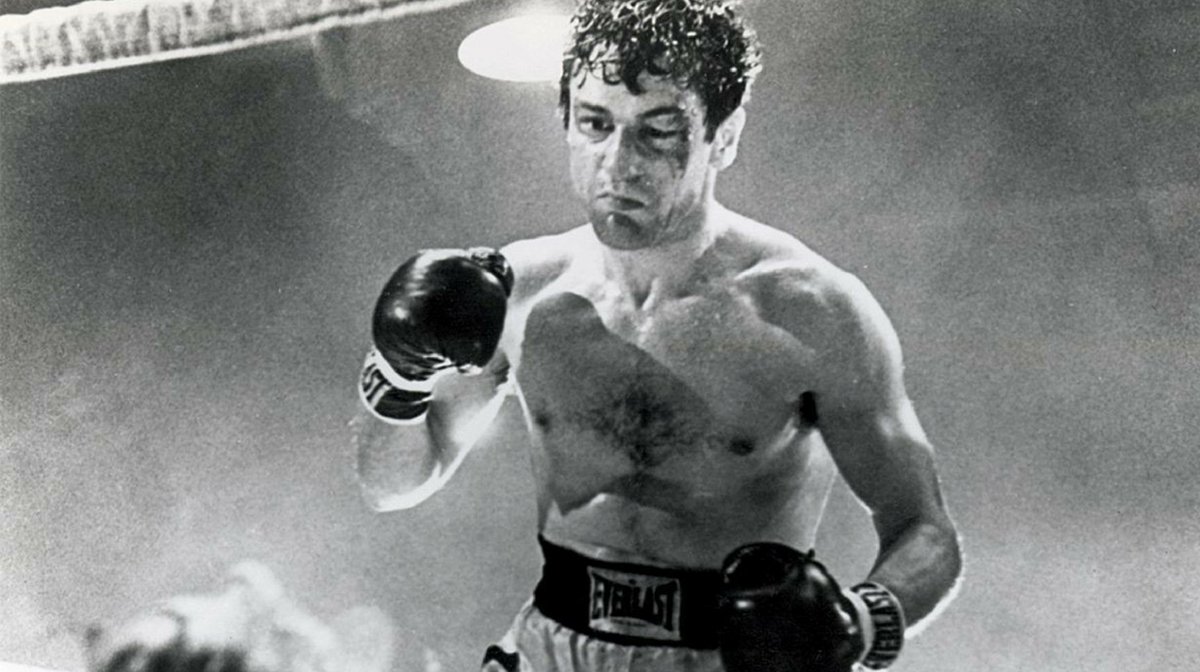 Distributed and made at the legendary United Artists, Bull’s framework and story stemmed from the period of the auteur, where directors could make films true to their vision without fear of cuts, changes, and backtracking due to budgets.

In fact, it was released across the US one month after the wake of the devastation left by Michael Cimino’s Heaven’s Gate, the biggest debacle Hollywood had ever seen at the time and one that, from that moment on, would change cinema irrevocably.

Indeed, you could argue that Scorsese’s notorious comments in the lead up to The Irishman about Marvel films being “like theme parks” stemmed from this moment in some way, that artistry was changed forevermore and still, the impact of such decisions is being felt by him and many other filmmakers today. 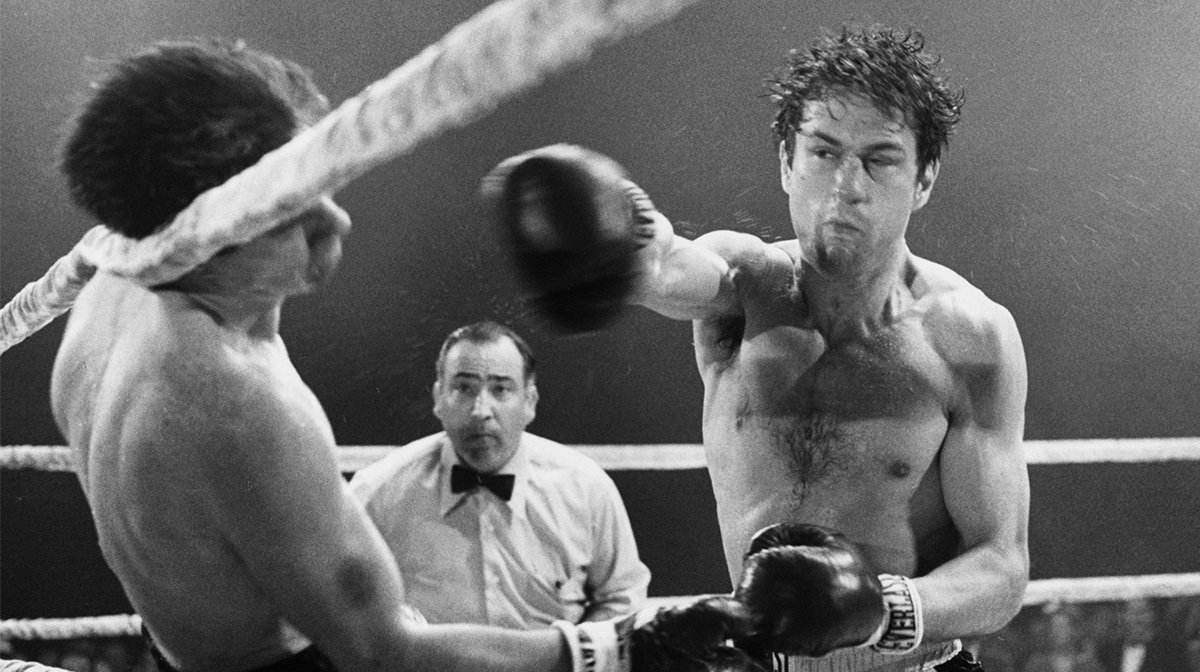 Thankfully, for us all, Raging Bull was made and four decades later it still packs a punch. Yes, we said it. As with its soaring, grounded narrative, still to this day, the boxing sequences are the best ever committed to film, being extensively borrowed from but never equalled.

Scorsese insisted that cinematographer Michael Chapman was in the ring with De Niro and play the de facto opponent, so that every morsel of the sport, and indeed LaMotta’s in-ring persona, could be absorbed by the audience.

Unflinching and uncompromising, the fights are majestic, sweltering in the heat of battle with the black and white palette only adding to their brilliance.

This is also our window into LaMotta’s soul, into both his tragic life, insecurities, and anxieties, and how, to navigate the murky waters, he has to fight his way to some form of redemption. 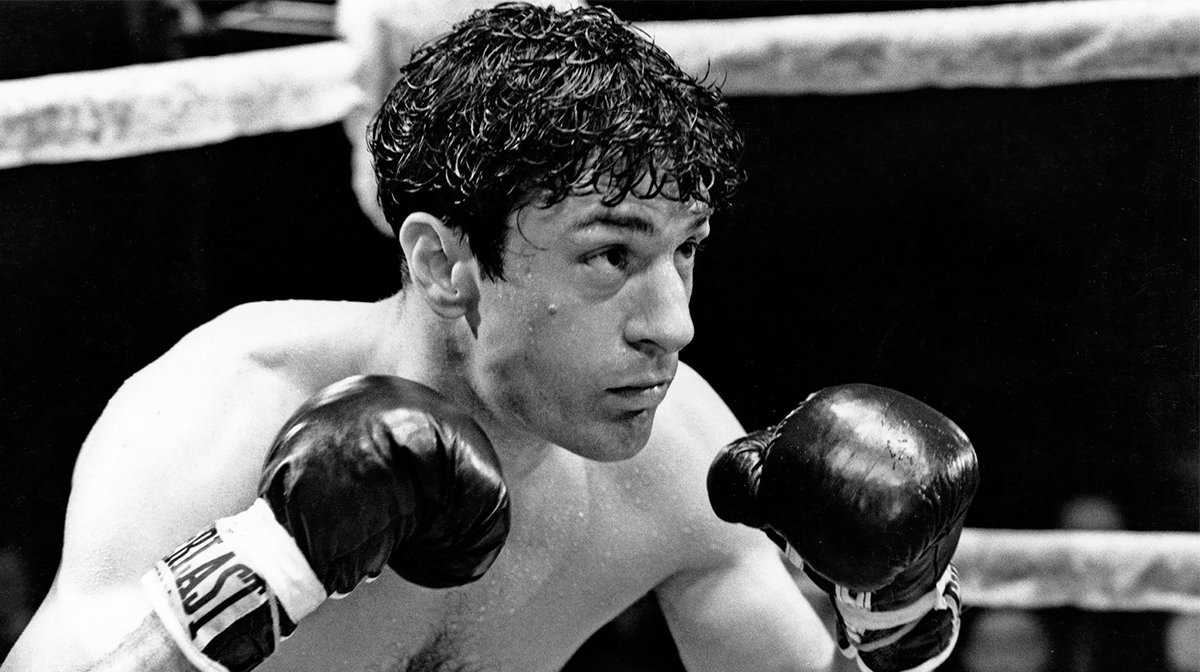 But for all its acumen and brilliance in the ring, it’s the film’s surrounding themes that make it really hit home, and why its continued resonance is still being felt today.

A blueprint for all sporting movies, and indeed those involving male protagonists that are striving for greatness, Raging Bull is fuelled by rampant ego and piercing insecurity, coursing through LaMotta’s veins as he strives to tackle his demons by beating those before him in the ring.

Every punch, every scrap, every bead of sweat stems from LaMotta’s inability to accept his deficiencies, refusing to look in the mirror at the monster that is staring him down in front of him, fearful that once his boxing career is over, he will no longer be able to control himself, no longer see himself as a man. 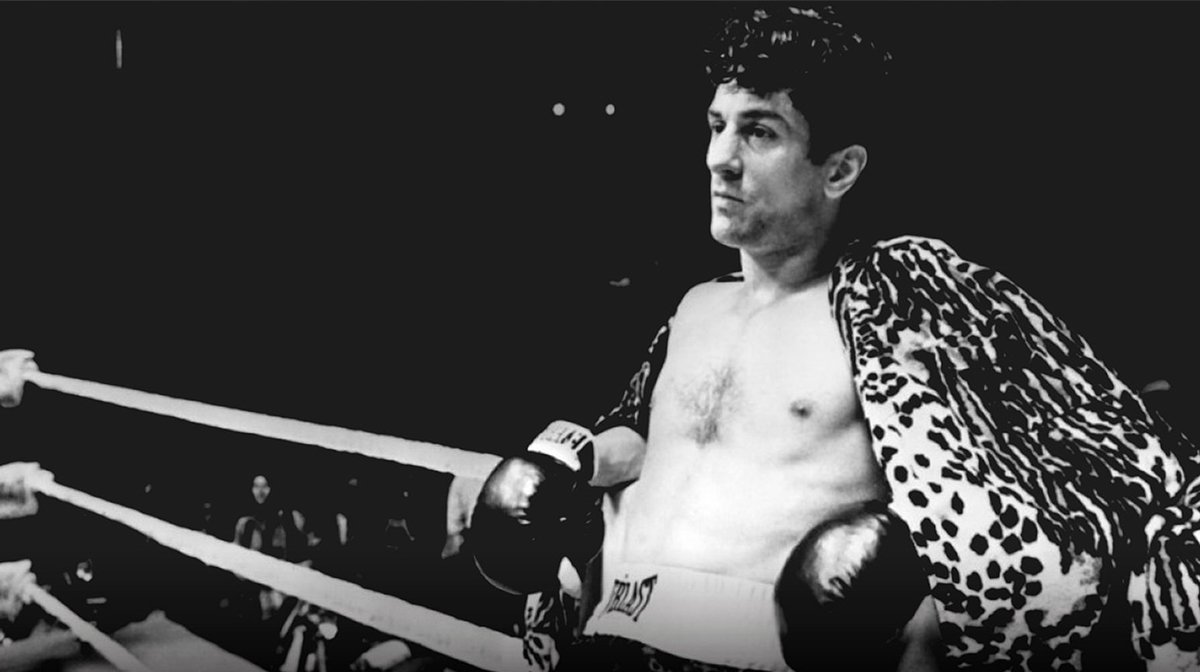 Indeed, it comes full circle later in the film when he must overcome those demons to rehearse for his one-man show, facing the monster one final time in order to find peace.

Now a broken man to some degree and suffocated by those demons, LaMotta is the complete anthesis of what made him great.

His soul has been bruised, his ego damaged possibly beyond repair, and he’s left gasping for air, trying to find some solace – and forgiveness – for a lifetime of sin and regret. 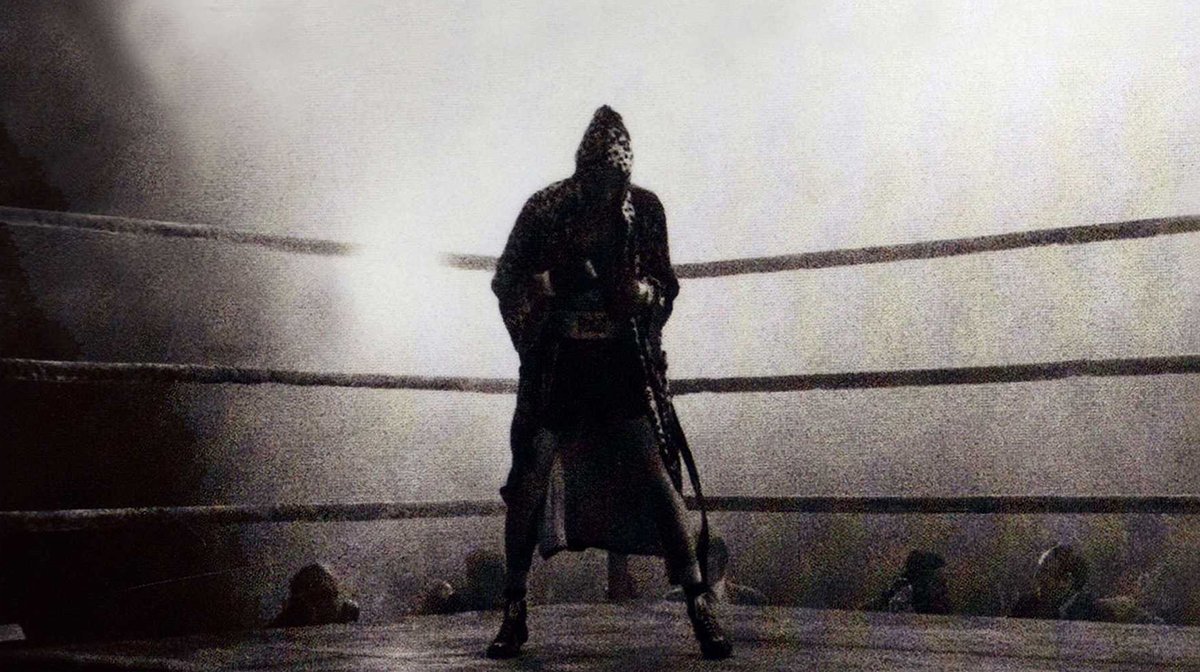 When we meet him years later, he drinks heavily, smokes incessantly, and is overweight, running his own nightclub as a way of fending off those surrounding forces that still want his soul.

Soon, locked up in prison, he comes face to face with the darkness that ensconced him and, for better or worse, begins to recompense and atone for everything, becoming a shadow of himself in the later stages: quiet, reflective and fightless. 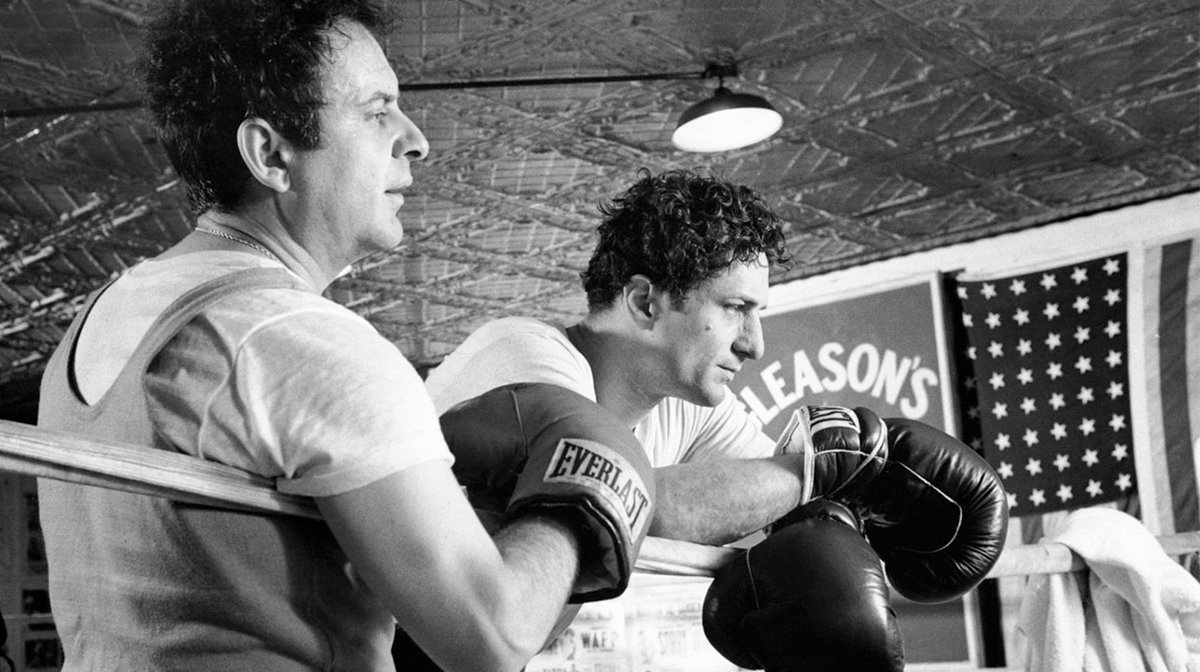 The comparisons with other boxing movies are hard to ignore, of course, and Rocky – released four years before – will always be the film that stands against it as the greatest, but despite the underdog-turned-champion narrative, it never cuts as deep as Bull in terms of its dirty, pessimistic realism that helps it stand at the top of the tree.