Streaming now on Shudder, edgy slasher Lucky tackles violence against women through a unique horror-comedy lens that is sure to have an impact.

Following a young woman named May who is stalked by a threatening figure who continually returns to her house, she fights not only against the intruder but to be believed by society.

A thrilling blend of comedy, satire, horror, suspense and just total bizarreness, Lucky is quite the ride but never strays away from its central message about society’s treatment of women.

We spoke to writer Brea Grant (who also stars as May) and director Natasha Kermani about the making of their slasher with a difference.

Zavvi: Brea, what was the inspiration for this story?

Brea: The normalisation of violence against women was of course my starting point, but I also in part wrote it as catharsis for myself because I had an experience with a stalker and I was still dealing with the ramifications of that, both in my personal life but also with the court system and police. So it was that mixed with what I was seeing around me.

Zavvi: And Natasha, what about the story drew you in?

Natasha: A producer thought I’d respond to the script and so it was sent to me with Brea in mind to play May, which Brea didn’t actually know about! So I read it with her in the role which was like a shortcut to visualising it. It’s a very funny script and I responded to how the humour became so grounded, by the end it has a lot of weight and gravitas to it. That journey was interesting but also an ambitious challenge I was drawn to. 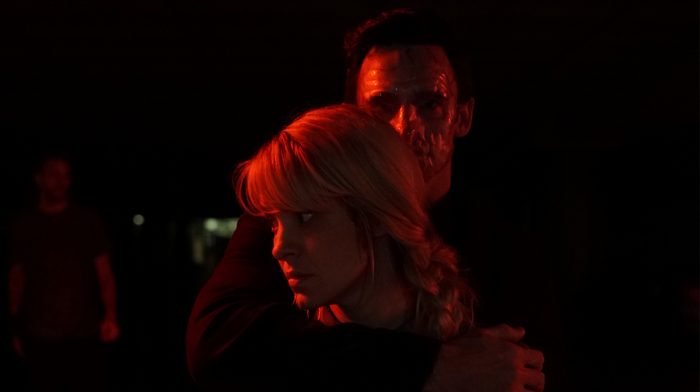 Zavvi: So Brea, was the original plan then that you would play May?

Brea: Absolutely not. The producers said they wanted Natasha to direct it and that they wanted me to play May. I was like ‘oh, that wasn’t what I pictured’ because I think May is so different to the way I view myself. Not that I can’t play someone so different, but it’s not a part I wrote for myself. I pictured someone maybe a little older and more established than me, with more gravitas…

Zavvi: I couldn’t see anyone else playing the role, so clearly you have that gravitas!

Natasha: The whole movie is really designed around Brea – she’s the centerpiece. We have this incredible actor and we build around her. It would have been hard to conceive it with someone else. 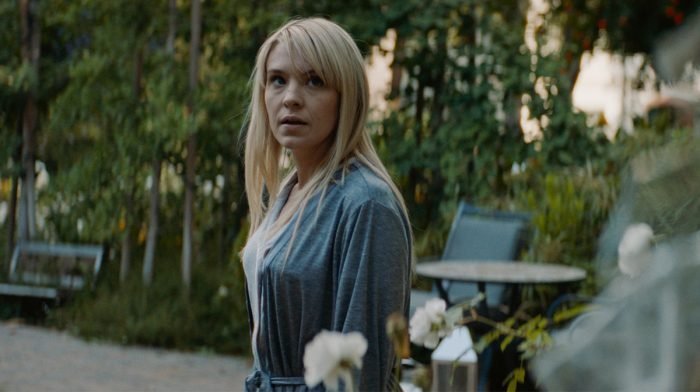 Zavvi: Of course! The way you film it Natasha is really interesting, how the light and sound design changes as more and more layers are uncovered and we dive deeper into the story. I particularly noticed it in the parking garage scene.

Natasha: Our director of photography, Julia Swain, was really jazzed about the idea of a film which has a look that changes throughout the course of the movie, the language transforms. We entertained the idea of doing mixed format, so having the aspect ratio change etc.

But we actually changed the look through a mixture of lighting and colour. It’s all informed by May’s journey so as the crescendo of weirdness builds, the language of the film does too. Almost every scene there’s a slight change – we start realistic and it becomes expressionistic. 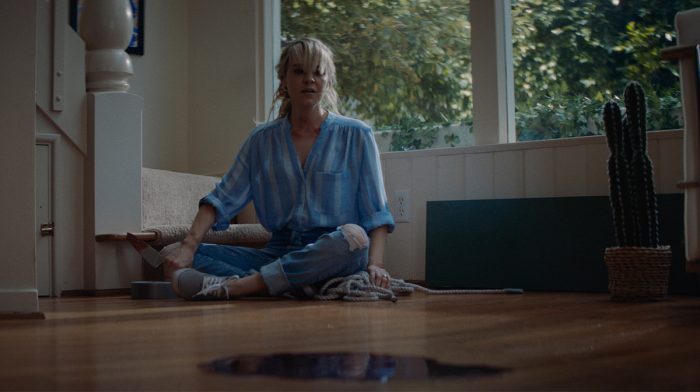 Zavvi: The intruder always has the same weapon as May. What was the thinking behind that?

Brea: I wanted the man to learn as May was learning, so it’s a reflection of where she is on her journey. So when they start they both don’t have anything, but as she finds a knife he shows up with a knife.

It plays into the metaphor of the more we try to fight and attempt to get help, the system changes to screw us. That’s the whole point, no matter what you do it’s a system designed to perpetuate violence against women.

Natasha: That also for me helped to inform the tone. This is like a Twilight Zone slasher. 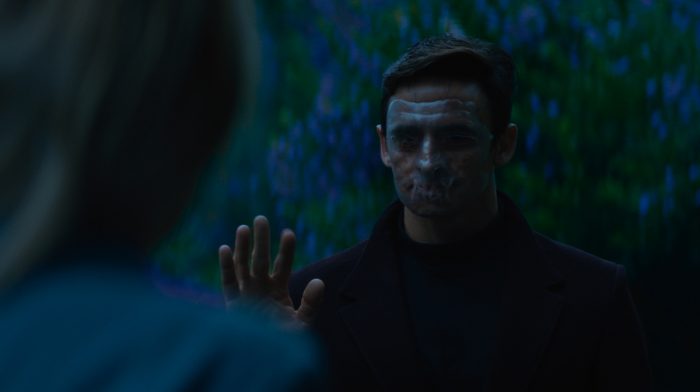 Zavvi: The emphasis on the word ‘lucky’, which is of course the name of the movie too, really hit home for me. May is constantly told she is ‘lucky’ the man didn’t do more, that nothing else happened.

Brea: We tried to find another title for the movie as it’s not googleable and some people were definitely worried about it. But what else would it be? It just felt like there would be no other title because it played on so many levels.

Natasha: Also I think usually for those with more insight into May’s experience, right off the bat they get the title. My reasoning for only putting the title at the end of the movie is that it’s the conclusion of the journey. When you get to it that word is so multi-faceted it encapsulates her experience, how society sees her and the reality of her situation. It’s used as another tool to tell May’s story. 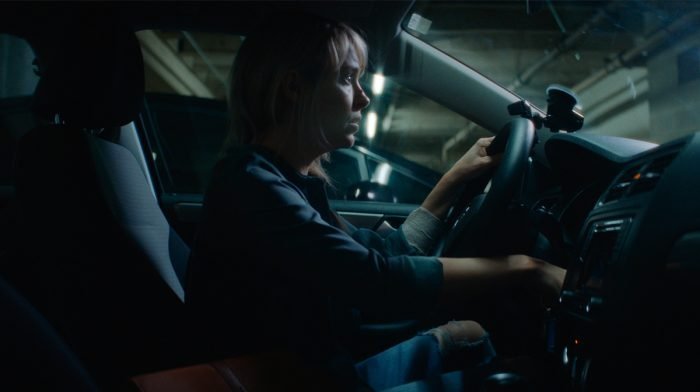 Zavvi: It’s interesting that May is a self-help writer as she is determined to face it herself, but there’s also a degree of incapability there.

Brea: That came later in the writing process but it informs all of her choices. She has lived by these rules she has set up for herself and for those who read her books. I should say that I’m not disparaging of self-help books, I read them and love them. But sometimes this advice is not good for everyone, it’s not a one-size fits all, it can be narrow-minded sometimes.

Zavvi: As you said earlier, it’s funny. You really strike a great balance between levity and the heavy themes. 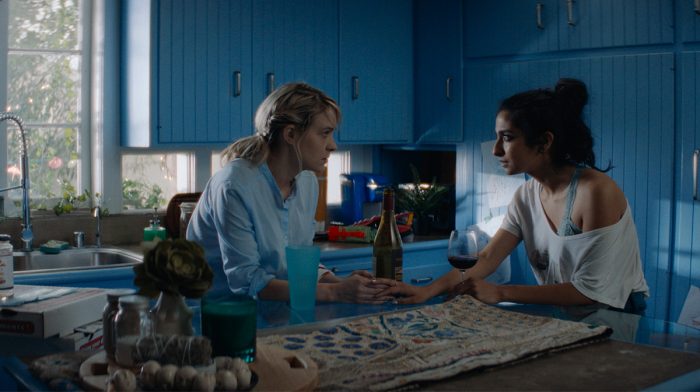 Natasha: If you use The Twilight Zone as a paradigm for this, there’s a lot of precedent for this. We are following in that tradition and Brea’s instincts are often as a comedian, and we cast comedians around her who could help bring that levity. But I needed to make sure it was still a horror and a serious movie.

Brea: What Natasha understood is that it is a satire, you are supposed to laugh at parts. She got that which I think some people who read the script didn’t necessarily understand. It’s not a straight-forward slasher. 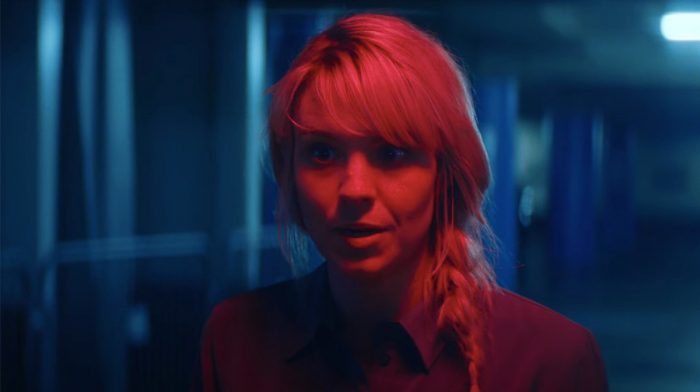 Zavvi: I think lots of us use humour to help process trauma, so it makes sense that there would be levity there. What would you like audiences to take away from the experience?

Natasha: It’s a film that can be watched multiple times, and I encourage people to do that – we tried to layer the scenes with lots of depth. ‘Easter eggs’ is a cheap way of explaining it but everything that’s in the frame has meaning and purpose. Pay attention to the background!

Brea: We hope it starts conversations. Maybe there’s not a specific message but I think it will spark things in people, and that’s what great art does – people will take away different things from it. 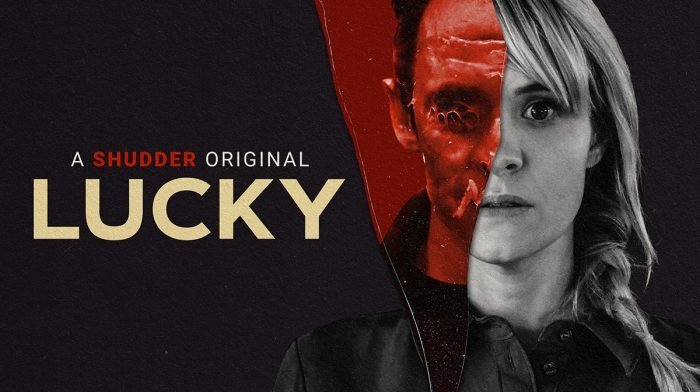 Zavvi: And finally what can we see next from both of you?

Brea: I have a graphic novel which is called Mary, it’s YA sci-fi story about a fictional descendant of Mary Shelley, it’s fun! I have another movie – I wrote and directed 12 Hour Shift which is on Hulu, and I’m in a movie called The Stylist which is on Arrow Player.

Natasha: Things are starting to wake up so hopefully we’ll be on a new movie soon. Hopefully the show can get back on the road.

Lucky is available to watch on Shudder now.