Arriving on DVD next week, biopic Radioactive documents the life and work of Marie Curie who not only was the first woman to win a Nobel Prize, but she also discovered two elements, polonium and radium, and developed the theory of radioactivity.

Directed by Marjane Satrapi and adapted from the graphic novel by Lauren Redniss, Rosamund Pike stars as Curie as she meets her husband and research partner Pierre, played by Sam Riley, and makes her groundbreaking discoveries.

Zavvi chatted to Riley about all things Radioactive, working with Rosamund Pike, Pierre and Marie’s relationship and much more. 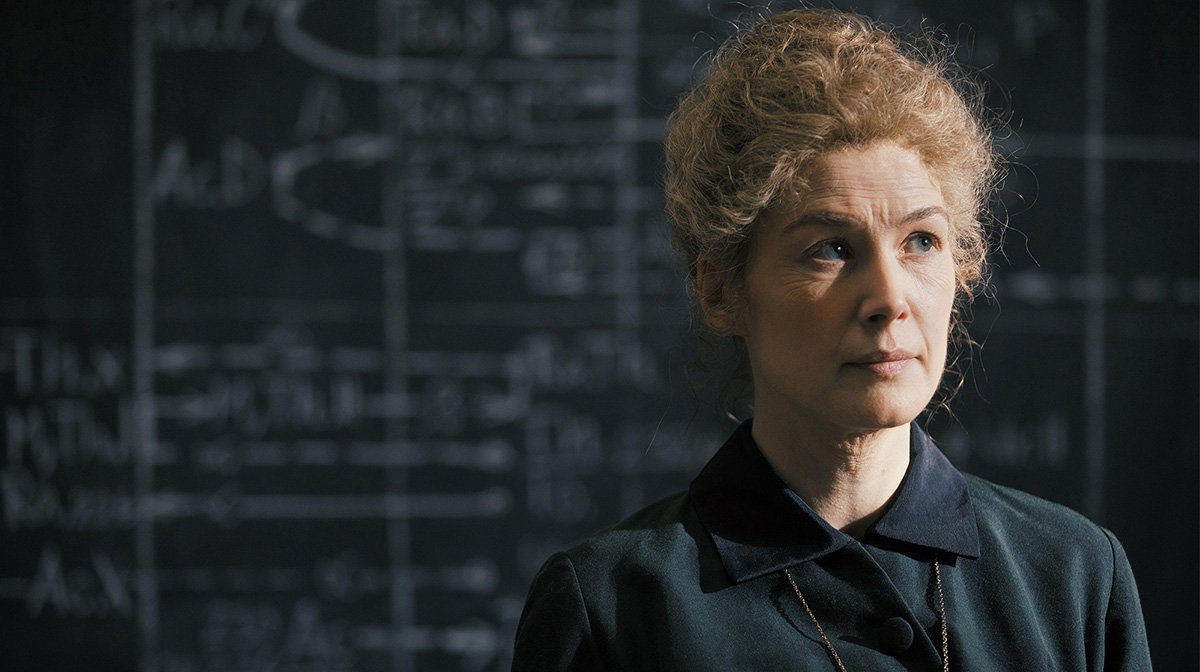 Zavvi: What attracted you to the part, and how did you get involved?

Sam: The thought of work! My wife (Alexandra Maria Lara) was on the jury in Cannes with [director Marjane Satrapi] several years ago, and I met Marjane there and loved her, I thought she was a fascinating character.

I then read the script and realised how ignorant I was. I knew almost nothing about Marie Curie and Pierre. And the fact Rosamund was playing Marie obviously was a big draw for me. I was invited in for a chemistry test with Rosamund, which I thought was incredibly thorough of them, and it obviously went well.

It’s a fascinating period of history as well. So many things changed during a very brief period. We learned about electricity, telephones, radium – it was sort of incredibly heady days back then. 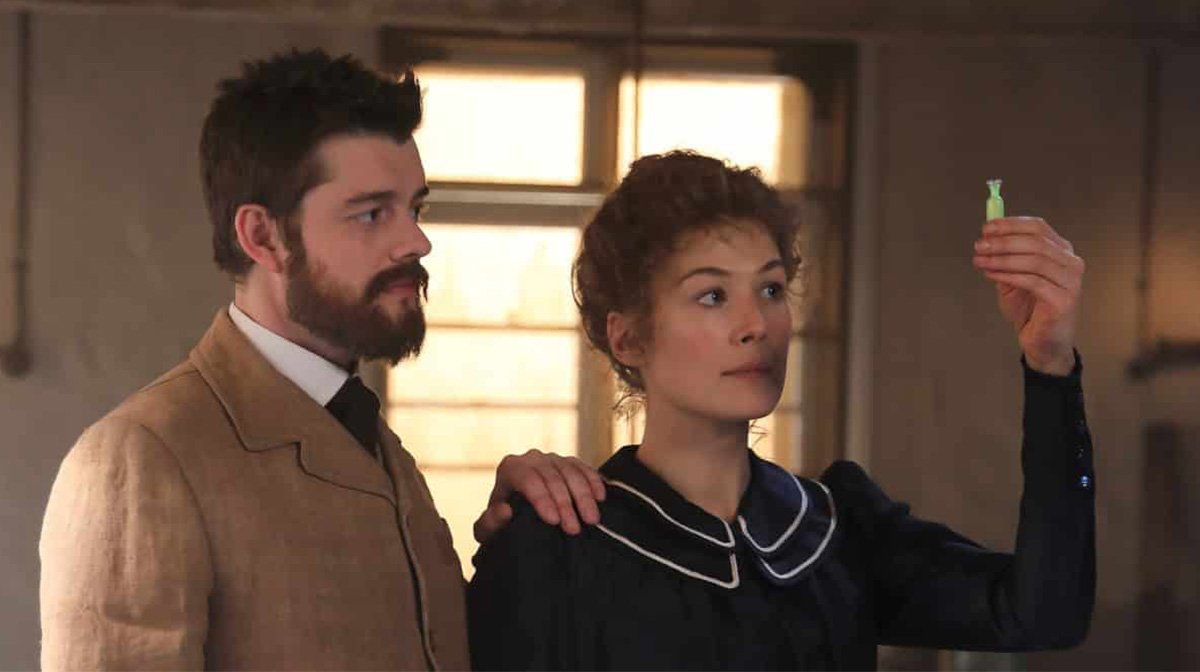 Zavvi: You mentioned a chemistry test there. What’s involved in that?

Sam: They picked three scenes for us to do, and they observed whether it was convincing or whatever. I later learned from Marjane that Rosamund was playing Marie with this unfiltered directness, which I found amusing but don’t think others had. But I found it charming and it worked.

Rosamund’s such a particular performer as well. She’s incredibly dedicated. As Marjane described her, she has no skin, she’s raw with feeling, and she’s fiercely intelligent. And that suited that side of Marie Curie. 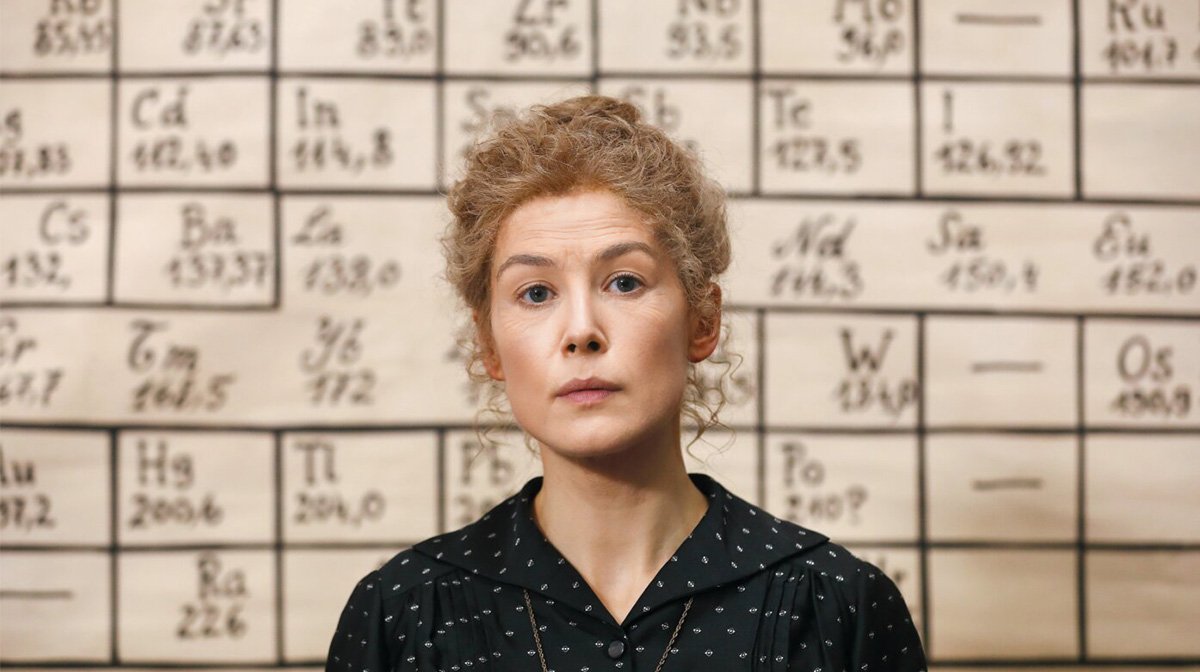 Zavvi: And what was it like, working with Rosamund?

Sam: I’ve been a fan of her work, and I’d listened to interviews with her and knew that when she did the movie with Christian Bale (Hostiles) that they’d both – method is the wrong word, because it’s misunderstood in many ways, everyone has a method – but she’s incredibly – what’s the right word? Dedicated doesn’t quite cover it almost… 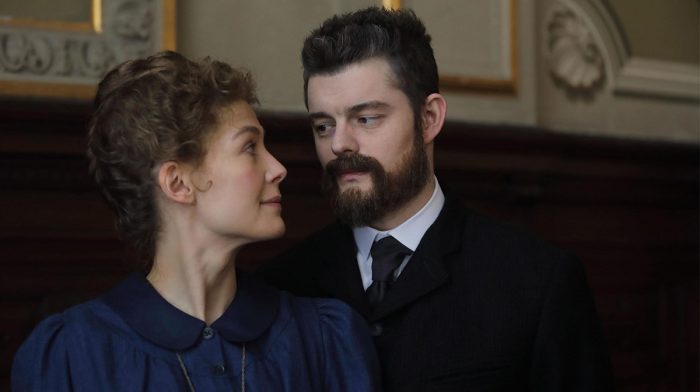 Zavvi: That she stayed in character off-camera?

Sam: She doesn’t do that, but she absorbs everything. Her room is covered in notes, like Marie Curie is left-handed, is so there were always these signs saying I’m left-handed and things.

And she’s very raw, she feels everything, she’s protective of the part, she’s very focused on it. And she’s fiercely intelligent. It’s great to work with people like that. You’re watching people transform and it raises your game. It’s fascinating. 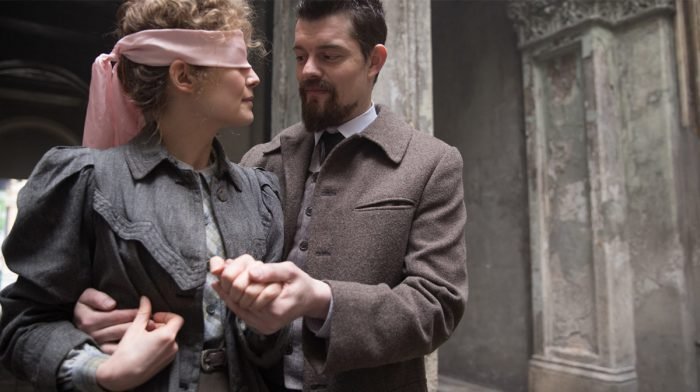 Zavvi: What kind of research did you do? And did you discover anything during the research that informed the performance?

Sam: Well, I remember Marjane saying to us that it’s important that when I’m describing how we come to these conclusions that I look like I know what I’m talking about. You can tell that, in the eyes of someone.

I was very lucky that there was a book, written by Marie Curie, about Pierre, a biography that describes his childhood and his relationship with his parents, which fed his attitudes in life – his parents were very progressive. So the book was an incredible resource for me. 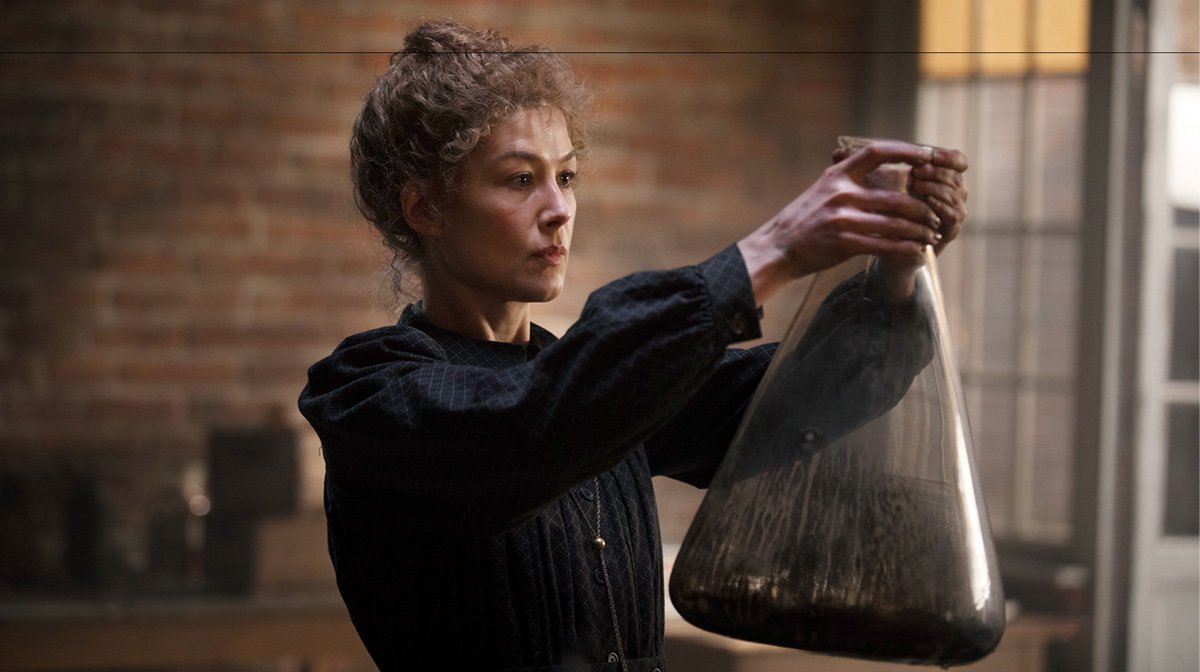 And we did have science lessons! I bought The Periodic Table In Ten Minutes, Chemistry For Dummies and things, because I was never very good at it at school.

I had an excellent history teacher who made it really come alive, but I was unfortunate with my science teachers, it all just seemed like things I had to remember in order to pass exams. Whereas later in life, I realised my interests are actually much more broad and these things are fascinating.

We had a professor at the university in Budapest, which is where we shot the film, who came and taught us the basics of handling the equipment convincingly, but also how it worked, the equipment that Pierre Curie designed himself. 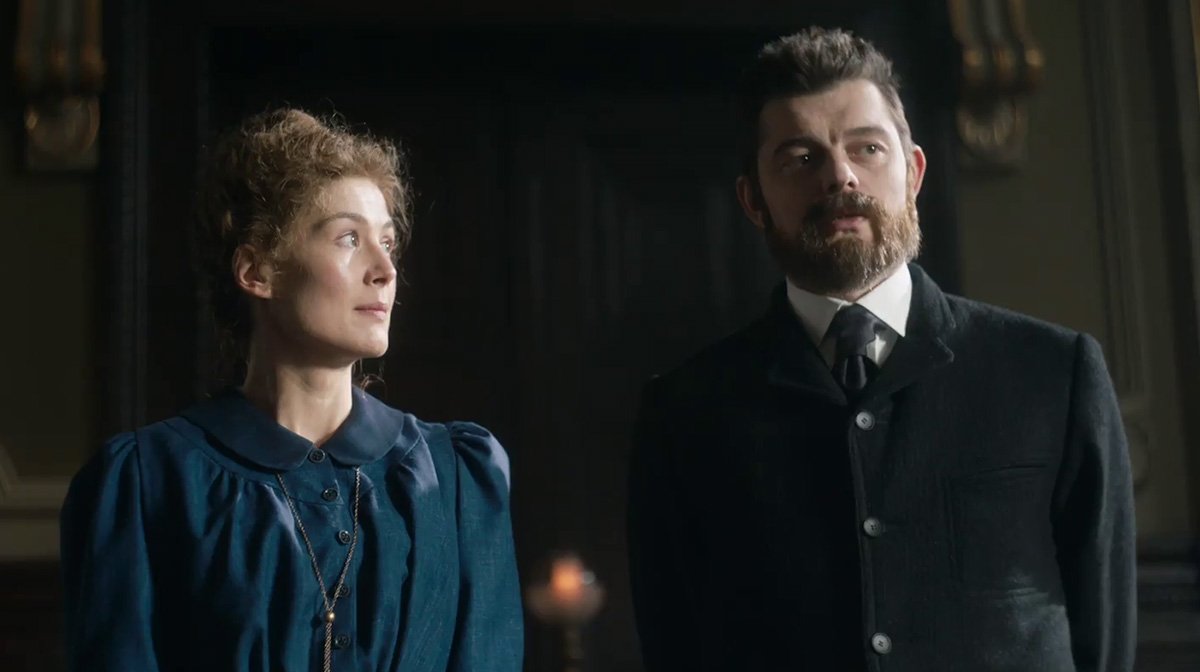 Zavvi: What do you hope people take away from the film?

Sam: I think most people are probably as ignorant as I was about Marie and Pierre, about the times they lived in, their achievements, their brilliance, their fascinatingly positive relationship. This union of physics, chemistry, genius and brilliance. And their work and love were sort of irrevocably intertwined with one another, which I think is a powerful thing.

And I think, as Marjane has said, that if there are younger people who are watching it, who then find a love of science, or discover a new role model, that’s great.

Also it’s rare for actresses not to play the wife or girlfriend of the great man. It’s very difficult to find roles for women, or stories being told that involves only them. 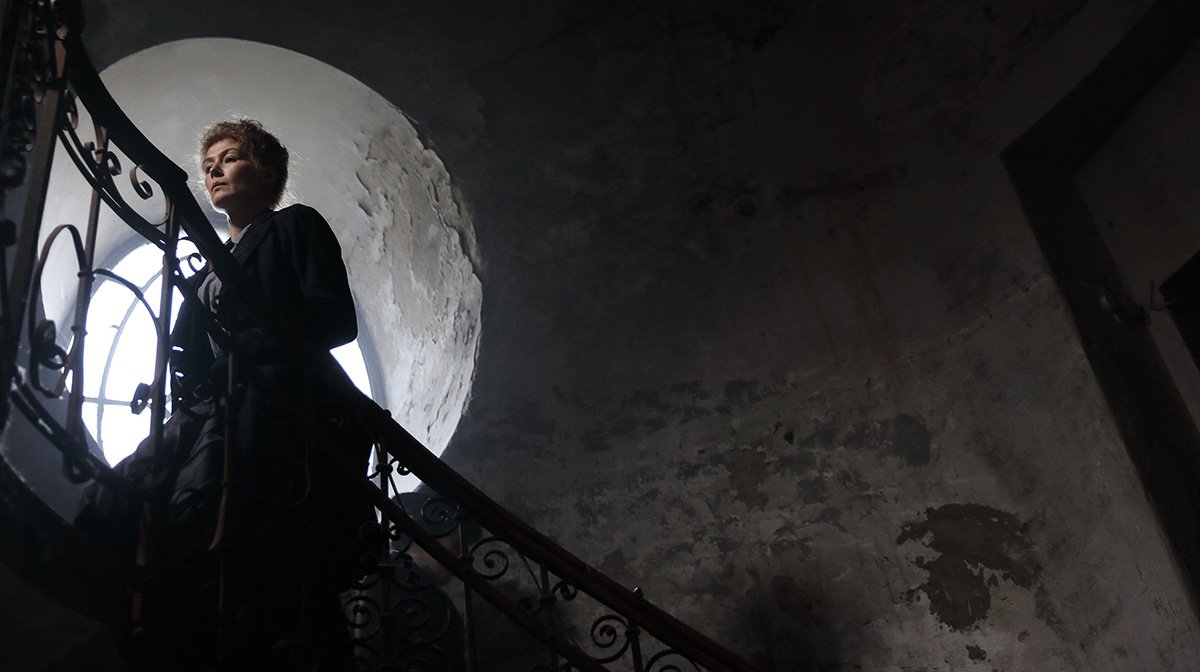 Zavvi: What’s your next project?

Sam: I don’t know what I’m working on next exactly, but I did two films last year: one called Way Down, which is a Spanish production, a caper movie where we rob the National Bank Of Spain, or try to, and I worked on Rebecca with director Ben Wheatley, the third time that we’ve worked together.

I love Ben and I love working with him, and I’m very happy that he keeps asking me back. And I think he’s going to do a really good job on it.

Radioactive is available to download to own now, and available on DVD from 27th July.