One of the stand-out movies from this year’s BFI London Film Festival is Supernova, a tender and beautiful drama that will make your heart ache, anchored by outstanding performances from Colin Firth and Stanley Tucci.

From writer/director Harry Macqueen, the film follows couple Sam (Firth) and Tusker (Tucci) as they travel across England on a road trip to visit friends and family following Tusker’s diagnosis with dementia two years ago.

Of course the movie will leave you reaching for the tissues, but there is much lightness to it too as the film celebrates their loving, committed and joyful relationship.

We spoke to Macqueen about making the movie, the real-life inspiration, and working with Firth and Tucci, who both brought a lot of fun to set.

Zavvi: Congratulations on the movie. I loved it and it had me in tears for the rest of the day. Where did the inspiration for this story come from?

Harry: It came from personal experiences, specifically about five or so years ago I was working with a middle-aged woman. I had worked with her for a year and I witnessed her changing a lot throughout that time, in terms of her personality and how she performed the job. She was fired and about a year later sadly she passed away.

I realised retrospectively that what I had been watching was the results of her early on-set dementia, and that was profoundly moving. So I then did a long period of research after that and learnt as much as I could about dementia, spending time with people living with it.

It came from those personal and intimate experiences, and I feel like it’s an important film. 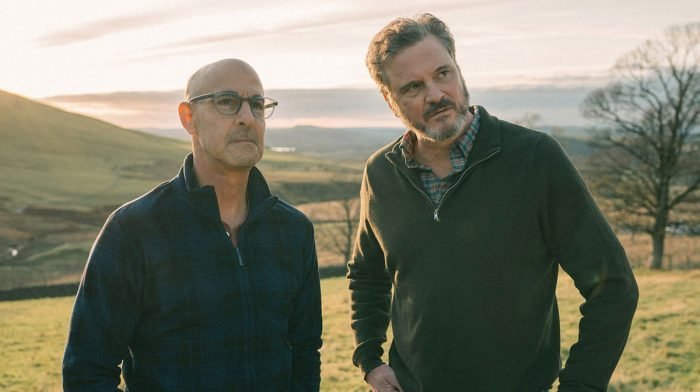 Zavvi: Yeah that intimacy comes across. It is very emotional and of course devastating, but there is a lot of lightness to it as well, especially in the portrayal of their relationship.

There are even laugh-out-loud moments such as when Colin Firth falls out of bed! Why did you go for this balance?

Harry: It was important to strike that balance as we want to remind the audience how beautiful, fun and happy this relationship is. It’s all about the light and the shade.

If you want to take the audience on this journey, and have them emote as much as I did, you should highlight what will be lost. 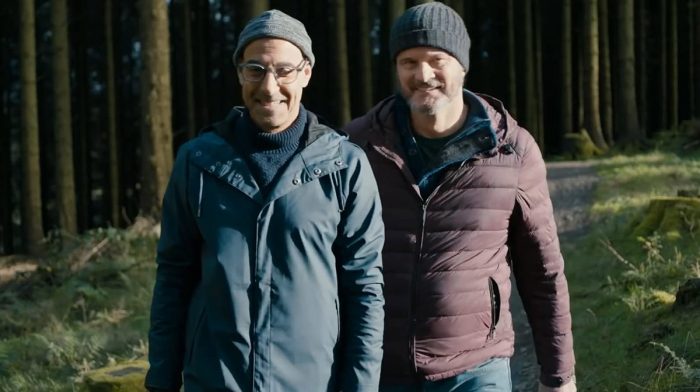 Zavvi: Both Colin Firth and Stanley Tucci are superb. How did they come to be in this movie?

Harry: It was a simple process to start off with, we contacted Stanley and he loved the script. He wanted to do the film almost immediately, and he wanted to chat about who would be playing opposite him.

I knew I wanted to get two actors who knew each other as it’s such an intimate movie, so he said ‘I don’t know whether you know this but my best friend is Colin Firth and I could get the script to him if you like’. So I said yes, but it turns out he had already given the script to him, and he loved it.

And it all happened quickly after that. They were so invested in their characters and the film. It was amazing and I was lucky we found the right people for the job. 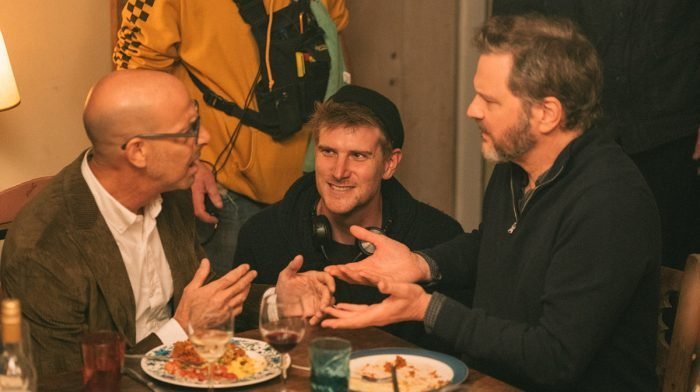 Zavvi: I understand they actually read for both parts.

Harry: Yeah they did, and it was an amazing experience reading the script on numerous times together with them swapping parts.

Colin talks about how we made the right decision, but he also mourns the fact he wasn’t playing the other character, as he loved them both equally, which is quite flattering to hear as a writer.

After trying things out it really worked this way round, and I think they bring such eloquence to their characters. 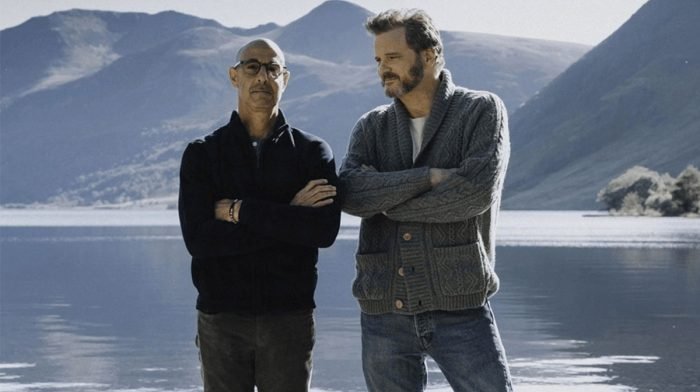 Zavvi: I totally agree. And it’s a road movie like your first film Hinterland. What is the appeal of that genre to you?

Harry: It seemed like something which would be cinematically original and interesting for this kind of story. I’m not that interested in the domesticity, so I didn’t want to sit them at home, I wanted them on the move.

And with the road movie genre the journey becomes literal, as well as emotional. Also we don’t do it a lot in the UK, so again it was trying to be original. 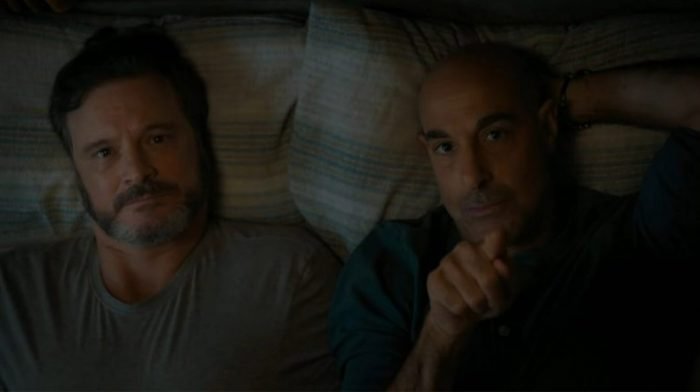 Zavvi: And one of my favourite things about it is it’s a gay relationship, but that isn’t presented as a plot point or anything. Why is it important for cinema to portray relationships in this way?

Harry: It’s the job of art to be forward-thinking and progressive, and to reflect a society you aspire to live in, and that’s what I want to do with my films.

And the movie is about a universal thing, romantic love, and how we negotiate that when life gets difficult, so it transcends sexuality. And so it not mattering is an important thing. 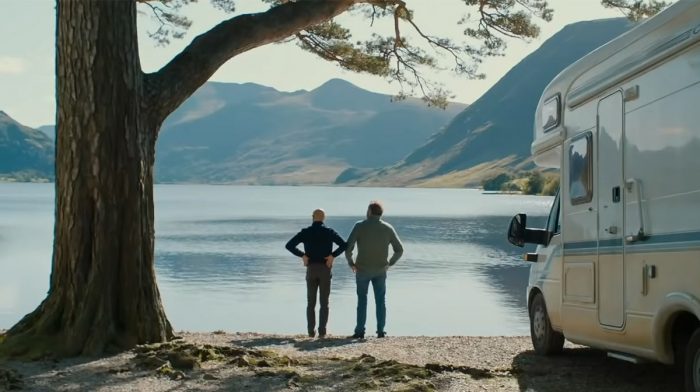 Zavvi: Yes, and that comes across. As you said Stanley and Colin have been friends for years, I imagine they are quite fun. What was the atmosphere like on set?

Harry: Yeah, they are just as you imagine them, really fun people. But it was an amazing experience as everyone working on the film was lovely and you don’t get that often.

Of course it was hard work, very emotionally difficult, but they are really fun guys and so invested and trusting of me, it made it dare I say it ‘easy’. We had a nice time, cried a lot too of course! And drank a lot too courtesy of Stanley! 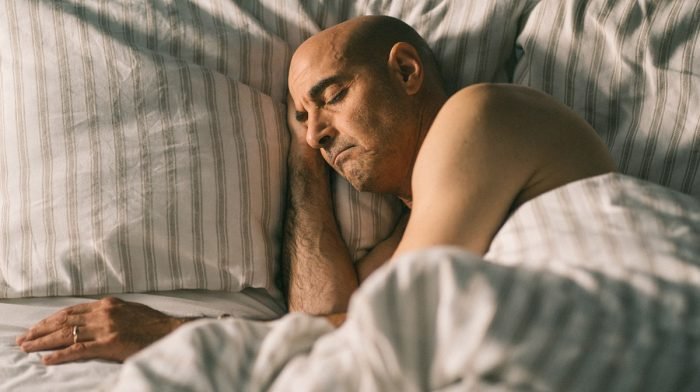 Zavvi: And did the pandemic affect the film at all. I think I read you got picture lock just a few days before we went into lockdown?

Harry: It was odd and challenging. For post-production usually, you are in the same room with people sharing that experience, but we couldn’t do that.

So we did a lot of it remotely, and people worked hard to adapt to get that process done. But we were lucky we finished the edit just before lockdown. The rest of the stuff was tricky and it took longer than it would normally take, but we got there in the end.

Supernova is playing as part of this year’s BFI London Film Festival. It will then be released in cinemas from 27th November.