Nicolas Cage has been many things over the years: an alcoholic screenwriter, a yuppie vampire, a con artist with OCD, and even the voice of Superman.

Even if you’re not a fan of Cage’s acting, it’s more than likely there is at least one of his films that you are a fan of, whether that be The Rock, Con Air or even the National Treasure films.

To celebrate his birthday today (7th January) we took on the monumental task of choosing his top ten best performances. So it’s time to put the bunny down and get reading. 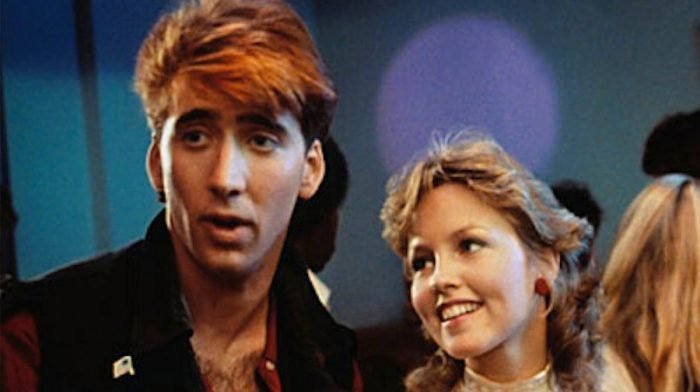 Cage blasted onto the scene in Amy Heckerling’s 1982 film Fast Times At Ridgemont High, and a year later he was playing the leading man in Martha Coolidge’s Valley Girl.

Loosely based on Romeo And Juliet, the film follows Julie (Deborah Foreman) a valley girl who falls for a punk called Randy (Cage). It’s fun to see a younger version of Cage, who seems laid-back and effortlessly cool.

It’s a silly, goofy film which looks slightly dated now, but it showcases Cage’s natural comedic style. If given the choice to pick smug valley boy Tommy (Michael Bowen) or Randy, we would definitely pick Cage any day. 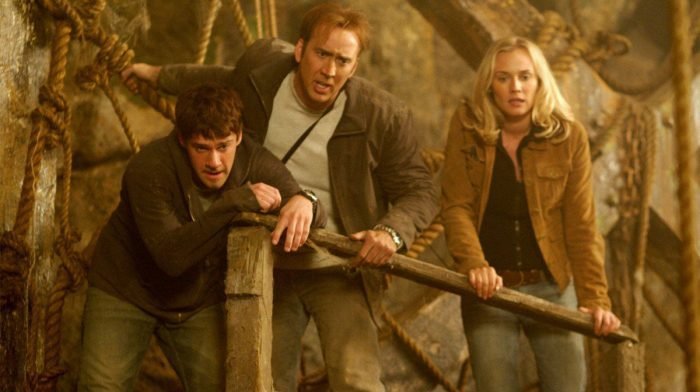 If anyone was going to be mad enough to steal the Declaration Of Independence then it would definitely be Nic Cage. He stars as Benjamin Gates, a third generation treasure hunter who has spent his entire life searching for the greatest treasure known to man.

Okay, so National Treasure is hardly a masterpiece, but it’s a fun ride. Yes, the script is full of plot holes and implausibilities, but Cage looks like he’s enjoying himself.

Cage, Diane Kruger and Jon Voight make a perfect team, and we’re well overdue another sequel (National Treasure: Book Of Secrets came out in 2007). Come on Disney, make it happen! 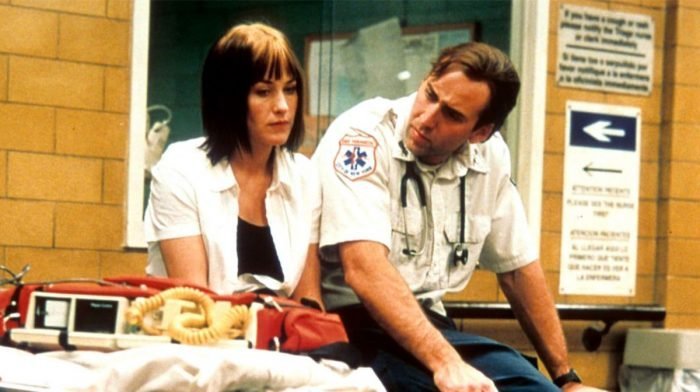 Can you believe that Martin Scorsese and Nic Cage have only worked together on one film? You’ve probably not heard of Bringing Out The Dead as it flopped at the box office back in 1999, but it’s worth seeking out.

Cage plays Frank Pierce, a burned-out hospital paramedic who works the graveyard shift in New York. Frank is driven by the need to save someone, and finds his path crossing with ex-junkie Mary (Patricia Arquette).

This is Cage’s Taxi Driver, and Cage is at his manic best here. It’s certainly a performance that you won’t forget in a hurry. 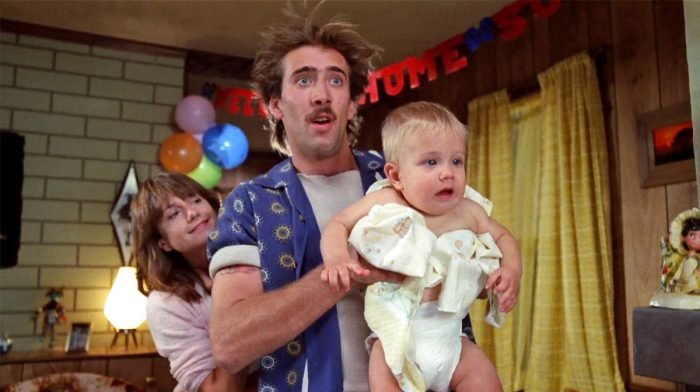 1987 was a great year for Cage; not only did he star in the critically acclaimed Moonstruck, he also starred in the Coen Brothers cult classic, Raising Arizona.

Cage is perfectly cast in this over-the-top cartoonish comedy about a childless couple stealing a baby to complete their family. With his spiky wild hair and southern drawl, Cage may be playing another deadbeat criminal, but you can’t help but take a shine to him.

The chemistry between Cage and his co-star Holly Hunter is wonderful, and Cage seems well-suited in a Coen Brothers film (sadly, they have never collaborated again). 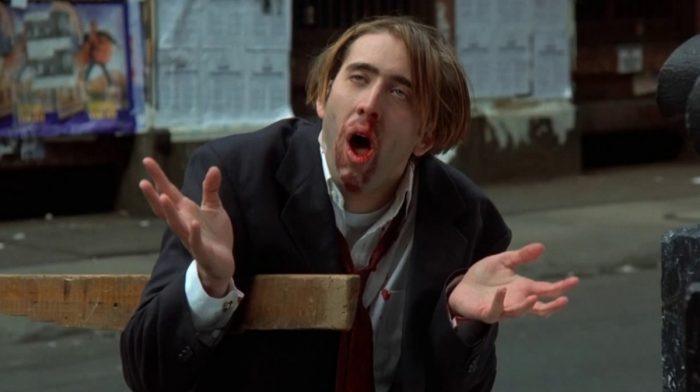 You might know Vampire’s Kiss from the scene where Cage hilariously recites the alphabet. Perhaps this was the film that kick-started all those ‘Nic Cage is a vampire’ rumors?

Vampire’s Kiss is a totally bonkers film, because Cage really goes over-the-top in a way like you’ve never seen him before.

Cage plays Peter Loew, a narcissistic and greedy yuppie who believes he’s turning into a vampire after being bitten during a one night stand.

Cue shots of Cage roaming the streets of New York, covered in blood and begging real pedestrians to put a stake in him. Vampire’s Kiss has to be seen to be believed. 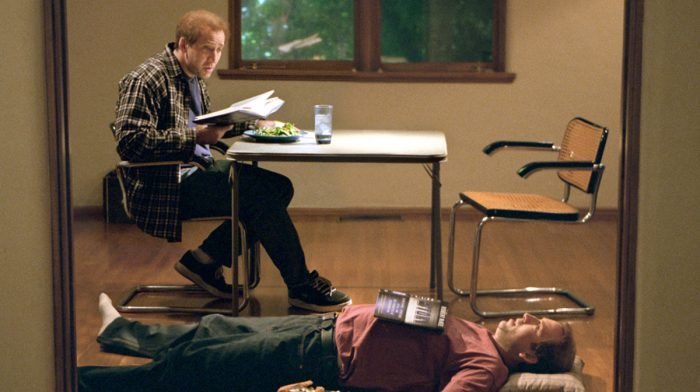 Cage manages to capture the two brothers’ different personalities, with Charlie being a nervous, jittery man who lacks self-confidence, while Donald is the complete opposite, brimming with an overabundance of confidence.

Originally Tom Hanks was set to play the roles, but it’s hard to imagine anyone but Cage in this film. 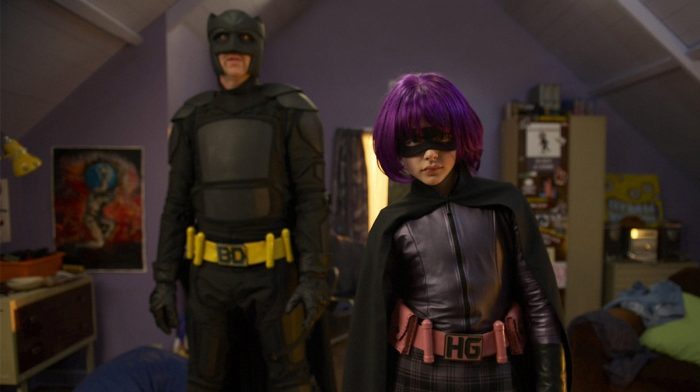 Fun fact: Cage is a comicbook nerd like all of us! Over the years Cage has been the voice of Superman in Teen Titans Go! To The Movies (2018), played Ghost Rider, and voiced Spider-Man Noir in Spider-Man: Into The Spider-Verse (2018).

However, his best known superhero is probably Big Daddy from Matthew Vaughan’s Kick-Ass. With the character of Big Daddy, Cage channels his inner Adam West from the classic Batman series of the 1960s, with his over-the-top line delivery.

Apparently Cage didn’t inform Vaughan about his decision and that led confusion on set, but he quickly saw that it worked and Cage’s performance was one of the best things about Kick-Ass. 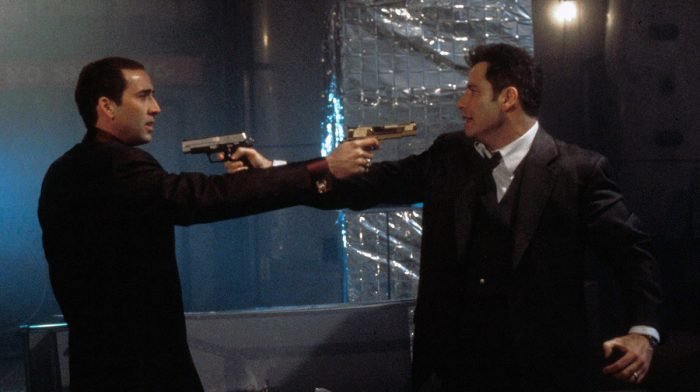 They end up assuming each other’s physical appearance. It shouldn’t work, but it does. Cage’s Castor Troy is an absolute riot at the start of the film, but the real fun begins when the two men switch faces and Cage must now embody Travolta’s portrayal of Sean Archer.

This is perhaps Cage’s most exaggerated and wild performance, which is seriously saying something! 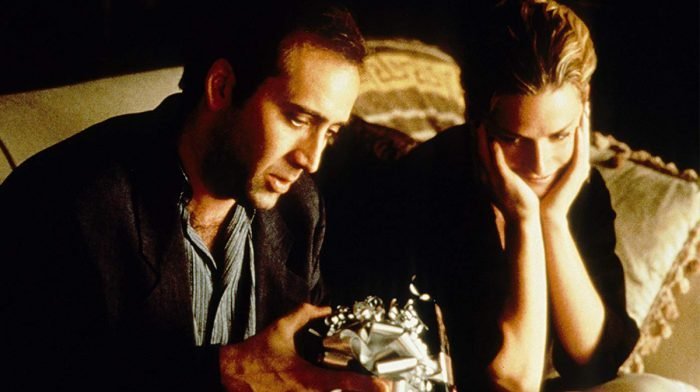 Cage has his own style of method acting, which he calls ‘Nouveau Shamanic’ and when he commits to a role, he goes the extra mile.

In order to prepare for the role of the suicidal, alcoholic screenwriter Ben Sanderson, Cage researched by binge drinking in Dublin for two weeks and had a friend videotape him so he could study his speech, and he also visited hospitalised career alcoholics.

Cage is a force of nature here, capturing a man on a path of self-destruction. His efforts paid off and he received an Academy Award for Best Actor, which remains his only win to this date. 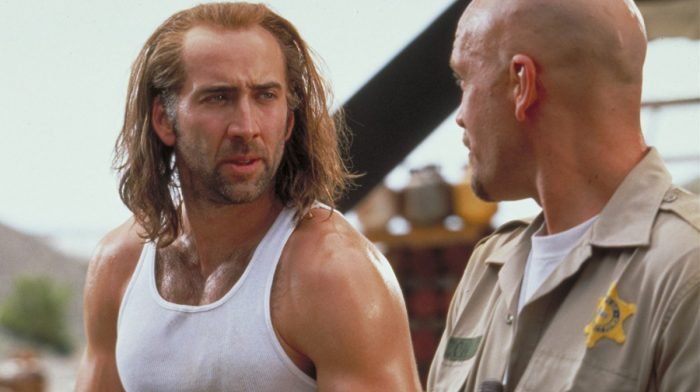 Can you believe that two of the best ever action films were released in the same year, and that they both starred Nic Cage?

While Cage was playing a bad guy in Face/Off, he was our hero in Simon West’s Con Air. Cage plays total bad-ass Cameron Poe who has the best haircut ever, and rocks a white vest better than John McClane (sorry, Die Hard fans).

Con Air is pure blockbuster entertainment, with its 90’s soundtrack, cheesy one-liners and explosive action sequences. It might not be the greatest work of art ever produced, but Con Air is so much fun and Cage is at his charismatic best.