If there’s one thing Star Wars fans can agree on, it is that the iconic lightsaber battles are always one of the highlights, and across its epic 42 year history, the Star Wars saga has brought us countless memorable duels.

Now with The Rise Of Skywalker less than two weeks away, we take a look back at the best battles.

Will your favourite make the list? Read on to find out!

10. Obi-Wan vs General Grievous (Revenge Of The Sith) 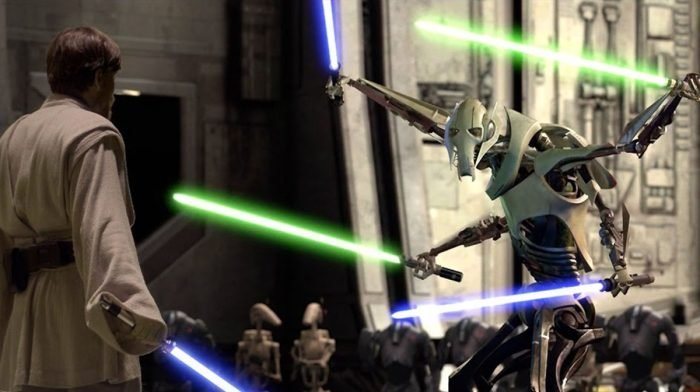 What’s better than one lightsaber? Well, four lightsabers of course!

In this lightsaber battle from the last instalment of the prequel trilogy, it might appear that our hero Obi-Wan Kenobi will have a major disadvantage, but he somehow manages to hold his own even with the odds stacked against him.

This duel not only proves Obi-Wan’s skills as a fighter, but is one of the more visually spectacular set pieces from the divisive prequel series.

Just don’t try wielding four lightsabers at home, it may not end so well!

9. Count Dooku vs Yoda (Attack Of The Clones) 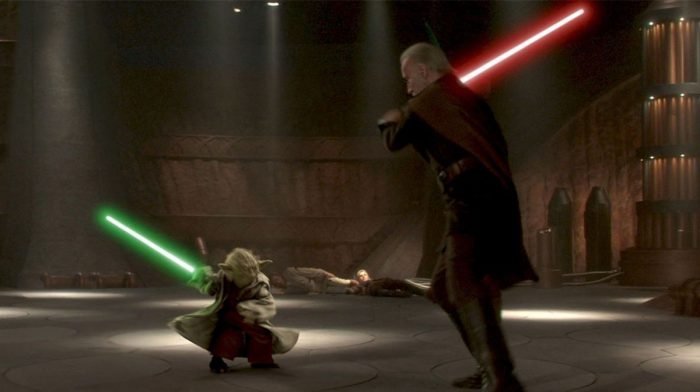 Another example of spectacle from the prequel trilogy, this thrilling scene gave fans the opportunity to see wise Master Yoda in his younger years, back-flipping and duelling with the nefarious Count Dooku.

For fans who had grown up with the Yoda of the original trilogy, this may have come as a huge surprise, and whilst it didn’t serve much purpose, it is undoubtedly one of the more exciting scenes to watch in Attack Of The Clones. 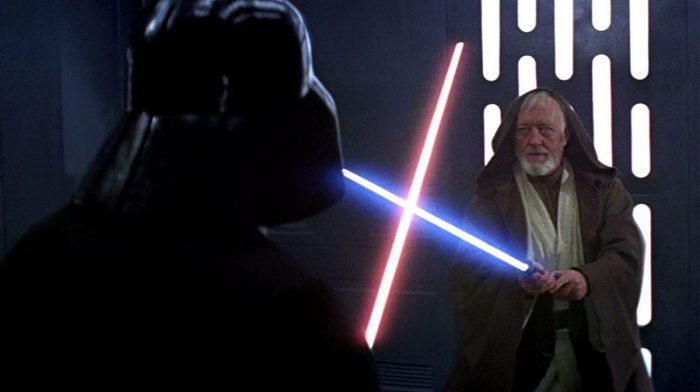 What it lacks in choreography and spectacle, this battle more than makes up for in meaning.

Marking the first time in many years these old foes have squared off against each other, old ‘Ben’ Kenobi undoubtedly has the disadvantage against his much younger nemesis, but this is as much a battle of wits as it is a battle of strength.

Giving us some of the most iconic lines of the entire saga, this duel is certainly one which has a lasting impact.

7. Darth Vader vs Everyone (Rogue One) 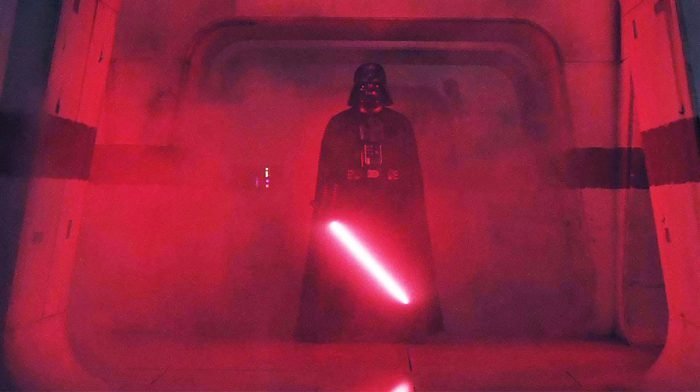 Whilst the chosen weapons of the Jedi are mostly absent for the majority of this anthology movie, we are finally rewarded with a glimpse of Darth Vader’s power in the film’s closing moments.

Leading almost directly into A New Hope, the final scenes of Rogue One reveal the red lightsaber emerging from the darkness, as our villain makes his entrance.

Of course, those in his way never stood a chance, and he quickly dispatches all of the ‘rebel scum’ in his path.

If there’s one character that knows how to make an instant impact, it is Darth Vader, and this scene is the perfect example of that.

6. Luke Skywalker vs Darth Vader (The Empire Strikes Back) 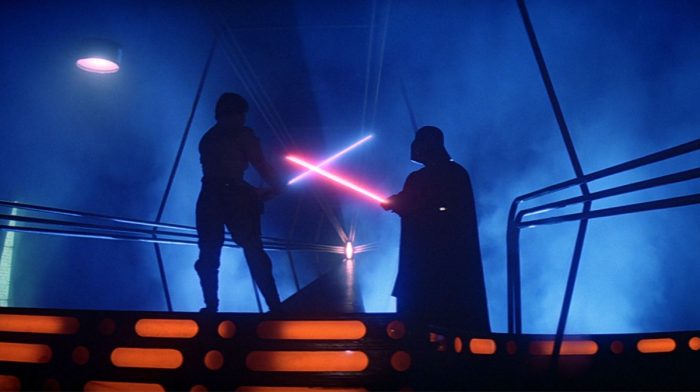 Certainly not the last time they would square off against each other, this battle on Cloud City has the added weight of Luke seeking revenge against Darth Vader for what he did to Obi-Wan Kenobi.

At this time, Luke is still unaware of the truth about their relationship, but of course we as the audience can sense the tension between them.

Luke is early into his Jedi training and a little naive, but he is still able to prove his worth against the more accomplished Vader, and the imagery in this scene is amongst some of the most iconic from across the saga.

5. Obi-Wan vs Anakin Skywalker (Revenge Of The Sith) 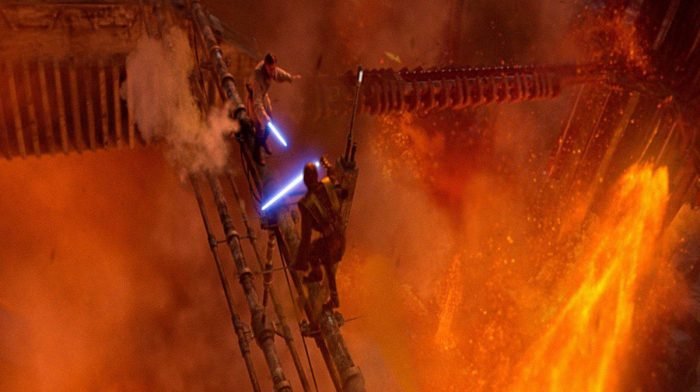 Possibly the most dangerous setting for a lightsaber duel, this fiery battle amongst the flames of Mustafar is certainly an impressive one to look at.

It is also notable for the fact that both combatants are at the height of their powers, albeit one on the side of the light, and the other on the Dark Side.

Having known Anakin since he was a child and trained him, Obi-Wan must now face off against his former Padawan in this intensely emotional duel. It’s a scorcher in more ways than one. 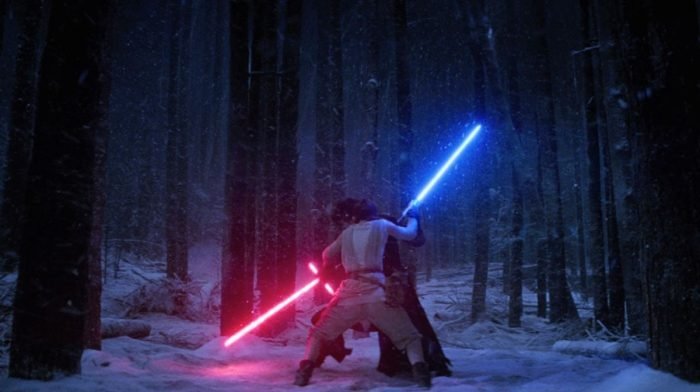 Where the original saga had Luke vs Vader, the sequel trilogy has Rey vs Kylo Ren, two people who undoubtedly share some common ground but yet find themselves on opposite sides.

In a moment which can now easily stand alongside some of the saga’s most iconic, Luke’s lightsaber flies towards Rey and in that moment, a new hero is born. Her strength in the force is something which catches Kylo Ren off guard, and the pair appear to be equally matched in skill.

Halfway through the battle there is a pause as Kylo Ren tries to tempt Rey to join him, echoing the way Vader tried to tempt Luke. However, like Luke, Rey manages to fight the temptation and finishes the battle leaving Kylo Ren bruised and battle-scarred.

This scene certainly set the stage for these two, and the best was still to come.

3. Luke Skywalker vs Darth Vader (Return Of The Jedi) 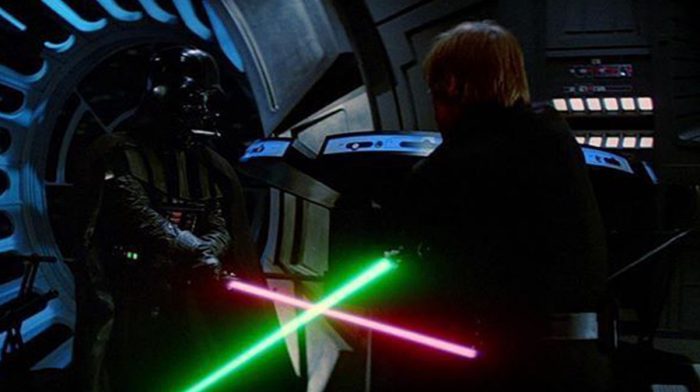 In terms of meaning, this duel easily takes the crown. Following the devastating revolution that Vader is in fact his father, Luke is faced with a difficult choice; killing his father or trying to find a way to get through to him so he can be redeemed.

Of course, Darth Vader is deep into the Dark Side at this point, and it doesn’t help matters when the evil Emperor Palpatine is hellbent on seeing Luke join them or die in the process.

No longer the naive young Jedi, Luke by this point has more than proved his worth, and he faces Vader stronger than ever and with a renewed sense of purpose.

2. Qui-Gon and Obi-Wan vs Darth Maul (The Phantom Menace) 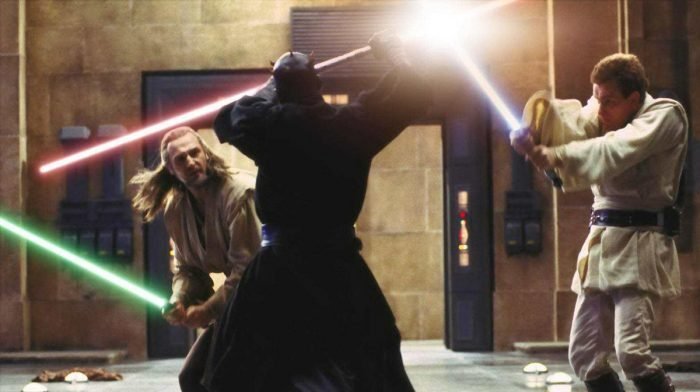 For all of its flaws, this first offering in the prequel trilogy easily has one of the greatest lightsaber duels ever, in the form of the triple-header between Jedis Qui-Gon Jinn and Obi-Wan Kenobi, and Darth Maul.

From the dramatic setting to the unforgettable score, this is a scene full of emotion, strength and spectacle. The double-bladed lightsaber wielded by Maul is easily one of the most badass weapons as well, and let’s face it, he is terrifying to look at!

Whilst the prequel trilogy may have disappointed many, there’s no denying that the ‘Duel of the Fates’ is a lightsaber battle for the ages.

1. Rey and Kylo Ren vs The Praetorian Guards (The Last Jedi) 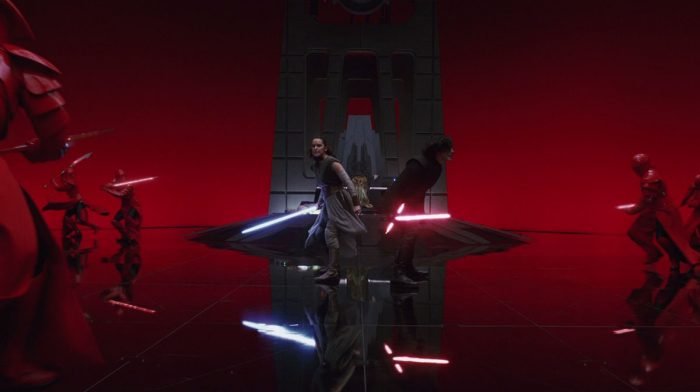 Whilst the film itself may have divided Star Wars fans, it also delivered one of the best battles in the whole of the saga.

Having previously faced off against each other, Kylo Ren and Rey now find themselves having to temporarily team up to take down the greater evil, Snoke.

Set against the dramatic red backdrop of the throne room, this scene is a visual treat and features some of the best fight choreography as well.

This scene is full of surprises, and it has certainly set the bar very high for the final instalment. Will anything in The Rise Of Skywalker top this? We can’t wait to find out!