Todd Phillips’ origin story for one of cinema’s most iconic villains goes to places most comicbook films wouldn’t dare.

Joker sees DC step away from a cinematic universe, although it seems unsure in its footing. Clearly distinct from the child friendly spandex we’re used to, it still chooses to flirt with its cinematic siblings.

Thomas Wayne (Brett Cullen), Bruce’s dad, is running for mayor, his Trump-esque speeches frequently aired on TV, declaring he’s the only hope for the disenfranchised poor of Gotham.

Meanwhile, Arthur Fleck sits in his grimy apartment with his sick mother, Penny (Frances Conroy). She worked for Thomas around 30 years ago, and is disappointed he never replies to her letters.

Arthur dreams of appearing on Live With Murray Franklin, a late-night talk show, with Robert De Niro playing its host in a very obvious nod to his role in Martin Scorsese’s The King of Comedy.

And the Scorsese homage doesn’t stop with the talk show. Travis Bickle’s taxi wouldn’t look out of place in Gotham’s squalid, neon-lit and garbage-filled streets.

We first see Arthur manipulating his face from a caricaturistic frown to a manic smile as he prepares for his job as a clown. Even among a group of fellow clowns he seems an outsider, his dreams of becoming a stand-up comic are frequently mocked by his co-workers.

We see him battered by a gang of kids as he dances with an ‘Everything Must Go’ sign outside one of the city’s many failing businesses.

His misery deepens as his therapy is dropped in city-wide cuts. This combination of woes makes for a believable backstory, but one that far too many people may feel they relate to.

Shortly after, he gyrates around his living room shirtless, wielding a pistol. Bones poke out at every angle as the sparse lighting illuminates the dramatic weight loss from Phoenix, his body contorting round the room to Slap That Bass from Shall We Dance.

This isn’t the last time we see him dance, but from this moment on a spark ignites in the character. He seems more unhinged, more volatile, ready at any moment to make the inevitable transition to become the Joker.

Hildur Guðnadóttir’s score ramps the tension up massively as we wait for Arthur to snap, and when it finally comes, the film picks up massively. An act of violence by Arthur, initially in self defence, sparks riots as reports hit the news. 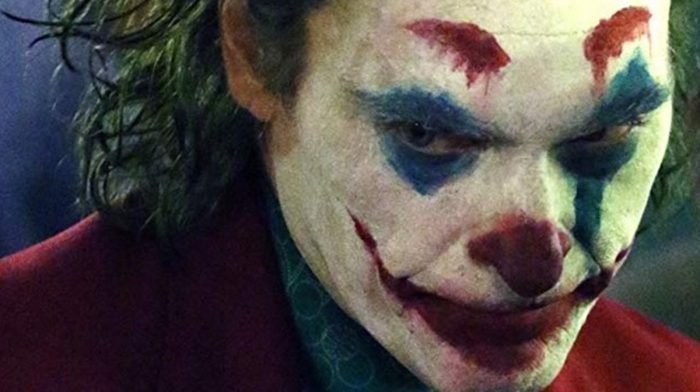 Class warfare seems imminent as civilians take to the streets to stand up to the one per cent that rule them, seeing the violence as symbolic, the spark to start a revolution.

As the situation intensifies, so does the internal warfare in Arthur’s mind. The film blends dreams and reality, with his uncontrollable chronic fits of laughter throwing in an extra layer of uncertainty. His unhinged howling is easily mistakable for crying.

A baggy second act eventually gives way to Joker’s manic finale, a cacophony of chaos, as Phoenix is allowed to run wild with the character. His violence is shown mostly without judgement, although we are obviously supposed to be impressed by his performance, his dance moves making him seem something of a rock star.

He’s clearly a bad man in a worse world, and represents the chaos society could dive into, which director Todd Phillips is clearly not supporting, but the downtrodden-man-who-society-doesn’t-care-about rhetoric wouldn’t sound unfamiliar coming from the darker corners of Twitter, and seems to invoke incel culture in all the worst ways.

It would come as no surprise at all if we see far too many people claiming they relate to the character and his motivations, much like the misinterpretations of Fight Club and A Clockwork Orange, and we can only hope that this isn’t taken too far.

Joker will be released in UK cinemas 4th October.

Are you excited to see Joker? Let us know on social media.