REVIEW: The Meg (Without Even Watching It)

With the release of The Meg last Friday, we thought it would be fitting to give the film a solid and fair review that it deserves. The only problem? I’ve not seen the film.

Get ready for the most factually inaccurate The Meg review you’ll read today (and maybe ever) with plenty of gratuitous references to Jason Statham!

*DISCLAIMER: I have watched ALL of the available TV spots and trailers so in the event I actually have predicted the events of the film, consider this a warning for spoilers ahead.

The scene sets with an ominous, murky ocean. As we descend into the deep we see the now iconic, Sea Base That No Way Resembles The One In Deep Blue Sea, where Jason Statham smoulders and stares pensively out into the depths for a solid 45 minutes. Whilst some say this in itself is gratuitous, we think it’s necessary plot development for later events. The film continues from here with a classic nail biter of a chase scene with plenty of comic ‘Scooby Doo’-esque door opening and closing chase scenes. Statham does his due diligence by repeatedly reminding the audience that this is in fact a Megalodon and not just a shark by regularly saying “It’s a Megalodon” (the trailers give the impression this is only once but it’s definitely said a lot more than just once). It’s clear that character development and plot were essential for formulating this film and we can’t fault the detailed storytelling here. 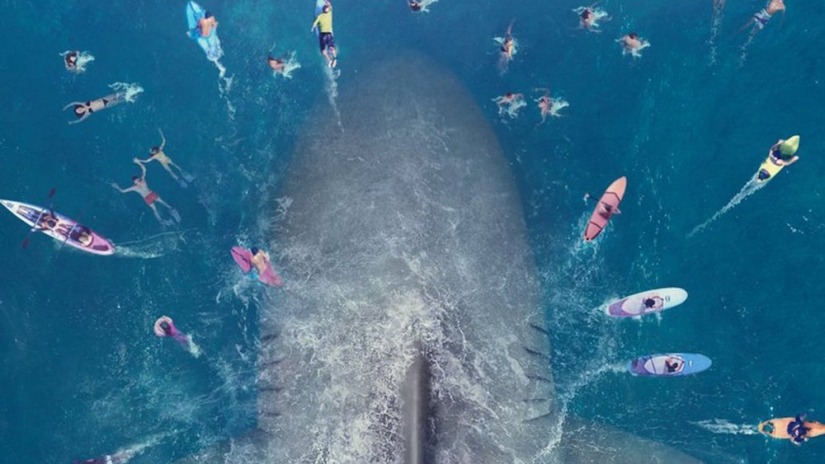 The casting for the Shark is a breath of fresh air in an otherwise idealistic world of Hollywood beauty standards. It’s refreshing to see plus-size actors in a movie of this scale and Meg’s performance is flawless from start to finish. We’d be as brazen as to say that this performance solidifies the actor as a true icon amongst other household names such as, Bruce*, Shark from Deep Blue Sea, Shark from Deep Blue Sea 2 (recast from original film), Megashark from Megashark VS Giant Octopus and, of course, Echo the Dolphin.

*Fun bit of movie trivia: the shark from Jaws is actually called Bruce. Look it up. True facts are included in this review too, see!

I really like Jason Statham and think he’d be fun to play tennis with. I can’t comment on the film beyond that due to contractual obligations.

The supporting cast are essential to making Jason Statham and Meg shine in this film and without them we don’t really see how the project would have supported such huge expectations. The inclusion and casting of Dwight from The Office US really did give us a giggle and we feel his performance was perfect. A true visionary of his craft.

Our only real criticism is the film could have done more with some varying locations. The premise of a film entirely set at sea can become tiresome and the constant dim-lighting does hinder some of the actors’ performances. Despite this, the film makes light of these limitations, with Statham quipping “if only we’d just stayed on land!” This line was met with a thunderous applause from the cinema and makes you understand why they left a 5 minute silence after the scene to compensate (although this still wasn’t enough for us to get over such a quick-witted jest!).

10/10. If you’re going to watch any shark film this summer, watch this one! Like a shark with blood in the water, do I smell a sequel after that cliff hanger ending?!?!?

Okay, so now you’ve read this far in the article we feel we should mention the film is actually supposed to be okay. Do you have a better review of the film so far? Let us know on Twitter tagging @zavvi!

The Meg is out now in cinemas. Pre-order your copy of the film in 4K UHD, 3D Blu-Ray, Blu-Ray and DVD here.