In 1978, America’s favourite anarchistic, social satire magazine National Lampoon turned away from their typewriters and switched to the spotlight with their box-office smash, Animal House.

Two years after awakening a revelation of college-comedies and welcoming comic star John Belushi to the big screen, writers Harold Ramis, Douglas Kenney and Brian-Doyle Murray set forward a plan to execute a film that was as insane and hilarious as their first big hit- and they did just that.

Showcasing the do’s and don’ts of the golf course through another hectic ‘snobs vs. slobs’ picture, Caddyshack, with its bizarre crude humour and heavy-weight comic cast, grew in popularity over the years, despite being panned by critics when first released in 1980. 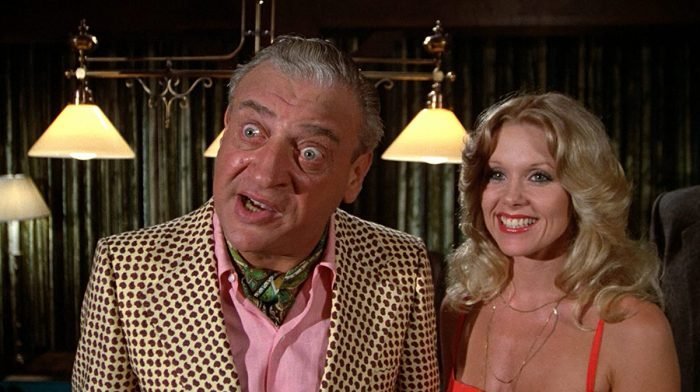 Based on the writers’ own caddy stories during their teenage years, Caddyshack is a bildungsroman like no other.

Set in Nebraska’s finest and most exclusive ‘Bushwood Country Club’, the drug-fuelled slapstick is far from the stereotypical sports movies the ‘Me Decade’ would present.

Taking golf and the art of comedy to a whole new level, Caddyshack is kamikaze filmmaking at its best with an explosive and outlandish retreat on the course. 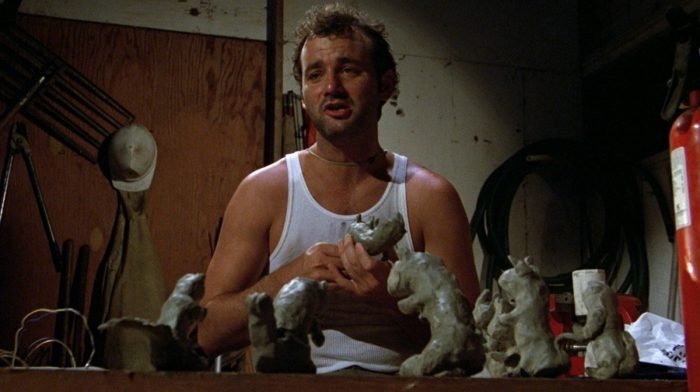 Following Danny Noonan (Michael O’Keefe), a young caddy eager to attend college and avoid the deafening plea of his parents’ suggestion at the lumber yard, Caddyshack paints coming-of-age films in the light they are shown in today.

Embarking on teenage dreams and desires through friendships, sex and bets, the 80’s classic also tackles the hardships and late night parties that quickly unleashes a host of weird characters that makes the sports satire so damn likeable. 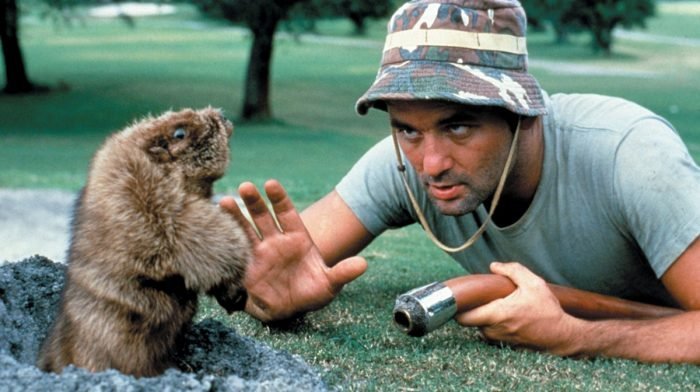 Introducing us to the two-faced, titular head of the country club Judge Smails (Ted Knight), his niece Lacey (Cindy Morgan) – “the biggest whore on 5th Avenue” – and his over-enthusiastic competitor Al Czervik (Rodney Dangerfield), the world of Caddyshack slowly starts to find its wacky image.

Bringing on SNL alumni Chevy Chase and Bill Murray to the rowdy bunch, as millionaire playboy Ty Webb and shellshocked club assistant Carl Spackler who bounce off each other spontaneously through each unscripted scene, the film swiftly receives its final riotous, iconic touch.

An illustration nonetheless that gave fans and golfers alike the opportunity to watch a comedy act out as a daycare with no babysitters; unplanned, unforced, and let loose with unlimited freedom. 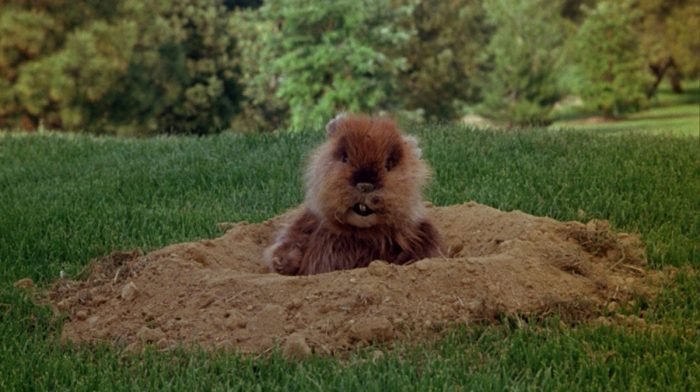 Holding a worthy classic status 40 years on, Caddyshack, helmed by first time director Ramis, is unlike other films that tend to fade away- a “fine wine” as the filmmaker puts it, that just keeps getting better.

And he’s right. From its hilarious musical segment of Journey’s Any Way You Want It blasting from a revamped golf bag, a Baby Ruth candy bar being mistaken for a “doodie” in a public swimming pool, and a mechanical, disco-dancing gopher spotlighting the whole film, it’s hard to understand how this slapstick could be so disliked upon its release, but it was massively. 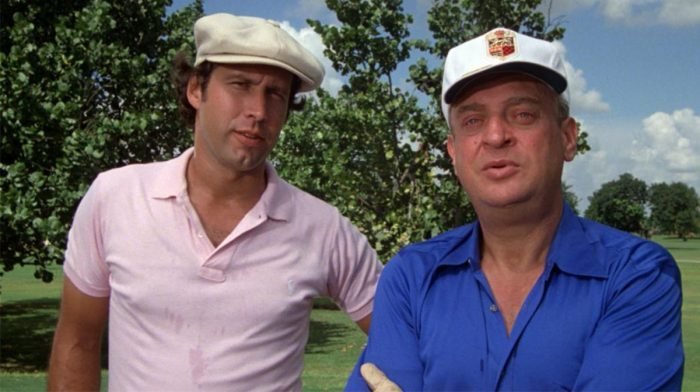 Loved by audiences and golfers alike for its unique and humorous look at the sport, critics however dismembered the outlandish comedy.

Remarking the film as “a stinky, dismembered heap”, Caddyshack was soon being stung with disappointment from those expecting the comedy to be on the same high bar of success Animal House had set.

Called out for its “cliched characters” and “vague subplot”, the rush of rotten reviews soon becomes quite gratifying when knowing that the comedy would become a beloved cult-classic and product of its time. 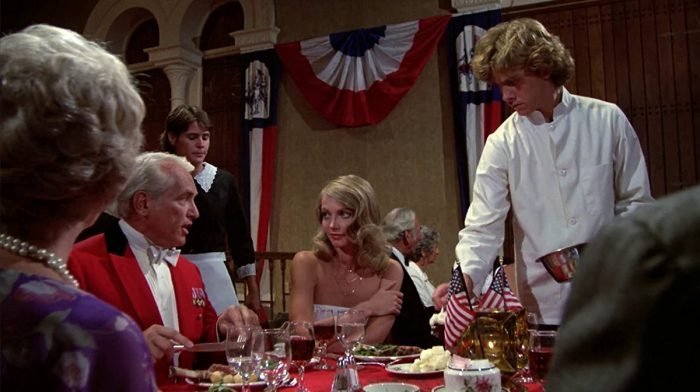 However, the loss of writer and National Lampoon co-founder Doug Kenney adds a degree of tragedy to the story.

His untimely death amidst the release of the film’s poor reviews means that he was never able to see the movie become the success it is today.

Despite hating the animated gopher and the film’s lack of intellectualism, Kenney added to the legend of Caddyshack throughout, and there’s no doubting his presence in the craziness that was going on behind-the-scenes. 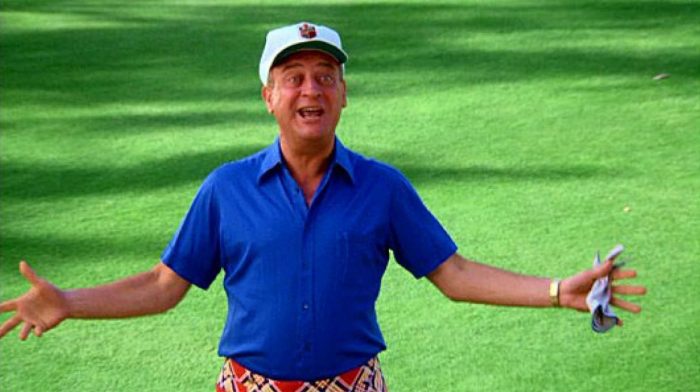 It’s hard to pull apart the ridiculousness of Caddyshack without mentioning the obscene amount of juice that fuelled it. Complete with an unscripted water ballet, a boat crash and an unexpected golf course explosion, the film’s famous avant-garde approach more or less came from the drug use.

Partying hard during the night, if not harder during the day, the heavy cocaine use materialised into the drug-laden classic Caddyshack is now applauded for.

From natural hurricane disasters turned full drug-rampant gatherings, midnight golf cart wars between the cast and crew, long-time feuds dissolving, and the beloved Bill Murray passing out in a sand trap, it’s hard to find another film comparable to the chaos Caddyshack radiated on and off-screen, and the iconic moments that (whether drug-infested or not) left us in stitches for all these years. 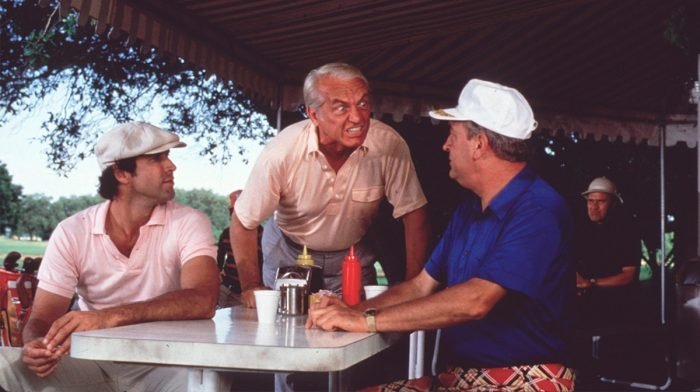 Struck by comedy lightening, Caddyshack is a beloved gem that will forever be a landmark in the madness and eccentricity cinema evolved into.

Described by fans as a therapeutic experience for its humorous appeal and memorable theme song, the timeless 80’s feature is a piece that, while not going down as an artistic masterpiece, will forever be alive with its loud approach to make people laugh.

A cult-classic nonetheless, if it taught us one thing amongst its spontaneous madness, it was that if you’re playing golf, always be the ball.