As Obi‐Wan Kenobi once said, you will never find a more wretched hive of scum and villainy!

The Star Wars saga is full of brave, bad-ass and selfless heroes, but for every Han Solo and Luke Skywalker, there is an extremely terrifying villain with plans to overthrow the galaxy! From Darth Vader to Dryden Vos, the Star Wars film franchise is home to some of the most truly evil baddies in cinema history, but who is the greatest?

To celebrate the upcoming release of Star Wars: The Rise Of Skywalker, we’re delving into the galaxy far, far away and ranking our favourite villains from worst to best!

Please note, for the sake of this list we’re only including major villains from the cinematic corner of the Star Wars universe. 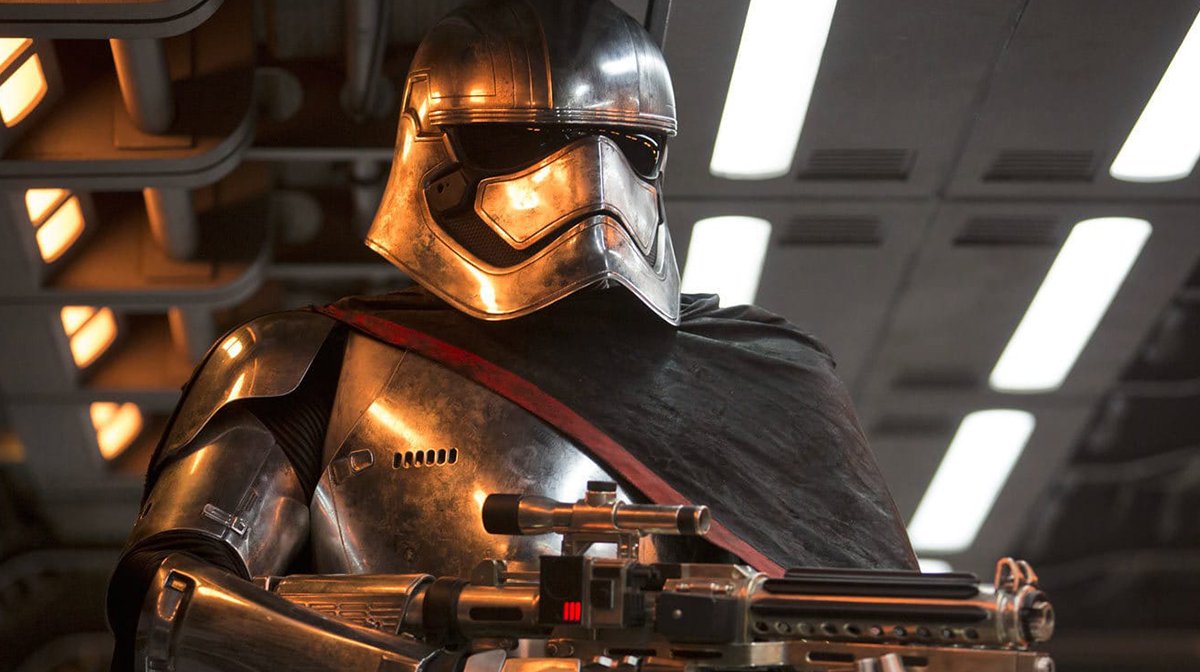 Captain Phasma might be one of the coolest looking Star Wars villains, but she’s far from the best!

As commander of the First Order’s troops, Captain Phasma was one of the sequel trilogies most exciting new villains, however, the character had very little to offer, and turned out to be nothing more than a glorified Stormtrooper in a flashy outfit. 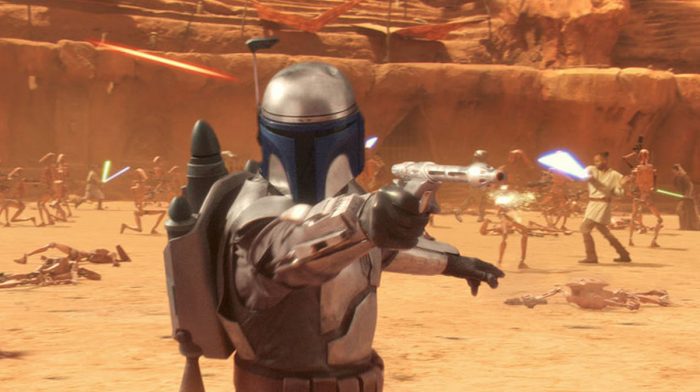 It’s not easy to take on a Jedi master, especially one as skilled as Obi‐Wan Kenobi!

Believed to be the greatest bounty hunter in the galaxy, Jango Fett is an extremely skilled and undeniably cool villain.

However, despite his important role in the prequel trilogy, Jango has very little to do as a villain, and doesn’t offer much when it comes to memorable moments. 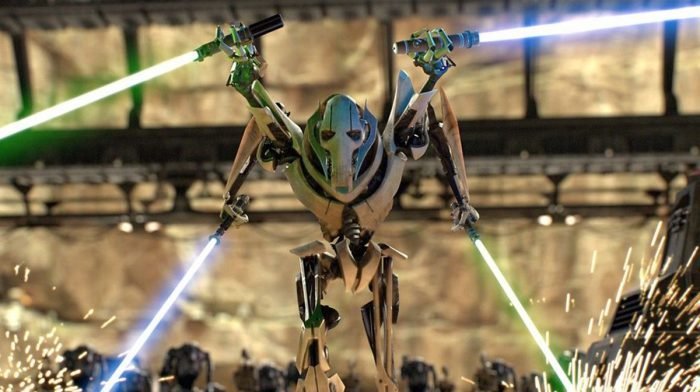 General Grievous proves that there’s more to being a great villain than just looking cool!

But wile Grievous was responsible for some of the prequel trilogy’s most exciting sequences, the character was never given a real chance to shine.

The prequels failed to give the character any meaningful material, and stripped the cybernetic Sith lord of any real potential. 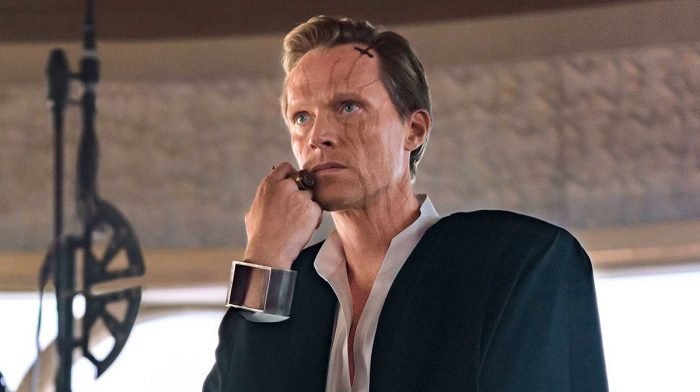 While Dryden Vos only had a limited role in Solo: A Star Wars Story, the Crimson Dawn leader managed to solidify himself as one of the Star Wars universe’s most ruthless, greedy and undeniably charming villains.

Let’s just say we wouldn’t like to be in this guys debt. 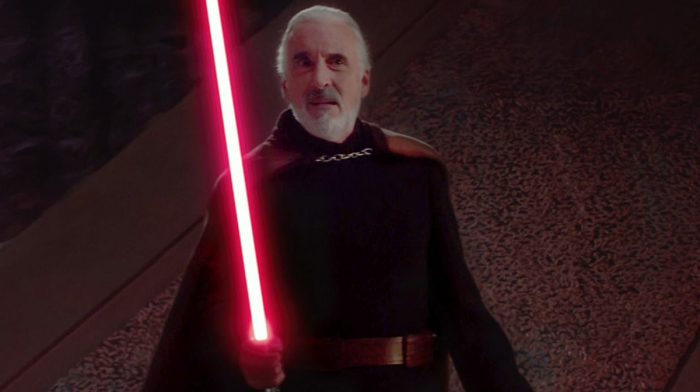 Count Dooku is the perfect example of an under‐developed villain, but the former Jedi master still managed to make his mark on the series.

Thanks to his iconic battle with Yoda and his victory over Anakin in Attack Of The Clones, Dooku is one of the prequel trilogy’s most enjoyable villains. 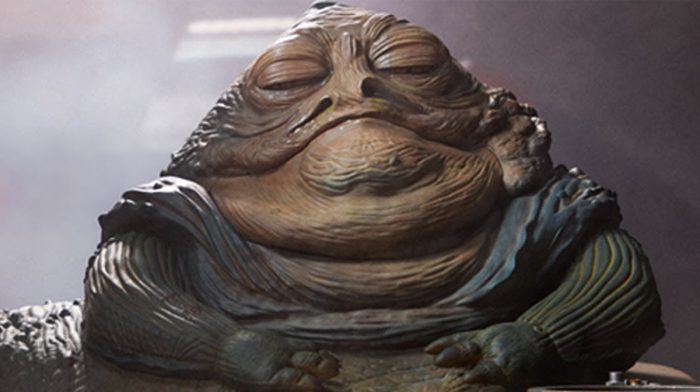 As one of the galaxies most powerful and feared crime lords, Jabba the Hutt is arguably one of the original trilogy’s most intriguing villains.

While Jabba doesn’t have a massive role in the series, his attempts to capture and kill Han Solo make him one of the more memorable villains Star Wars has to offer. 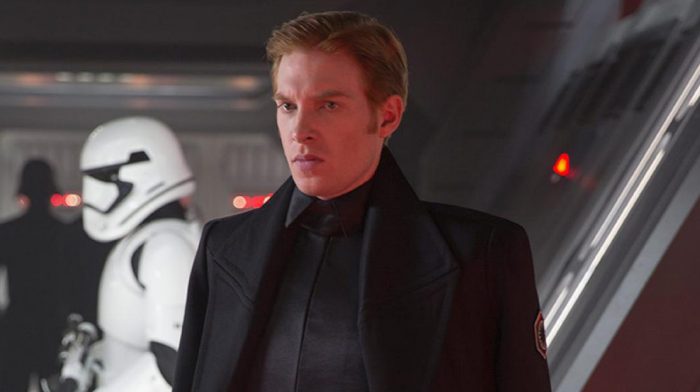 I think we can agree that when it comes to all of the villains on this list, General Hux delivers the best speeches!

As commander of the Supreme Leader’s military, Hux is responsible for a number of the First Order’s most heinous acts, and is quite easily one of the vilest characters in the Star Wars franchise. 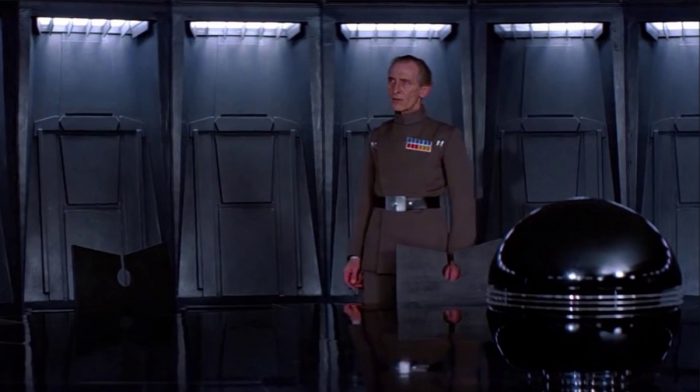 As commander of the Death Star and the first Grand Moff in Galactic Empire history, Tarkin is an unforgivably evil villain.

Tarkin might not be a Sith lord like Vader or Darth Maul, but he’s quite easily one of the vilest and most ruthless villains in the galaxy far, far away. 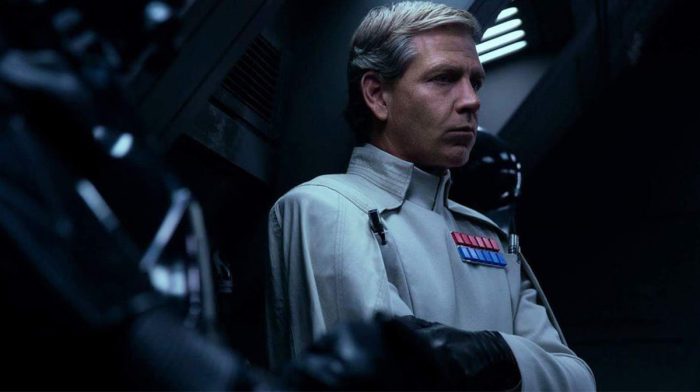 Is there anything worse than a slimy kiss‐ass who’ll do just about anything to impress their boss?

Responsible for building the Death Star and handing it over to the Empire, Krennic is perhaps the Star Wars franchise’s greediest and most desperate villains, which makes him all the more entertaining. 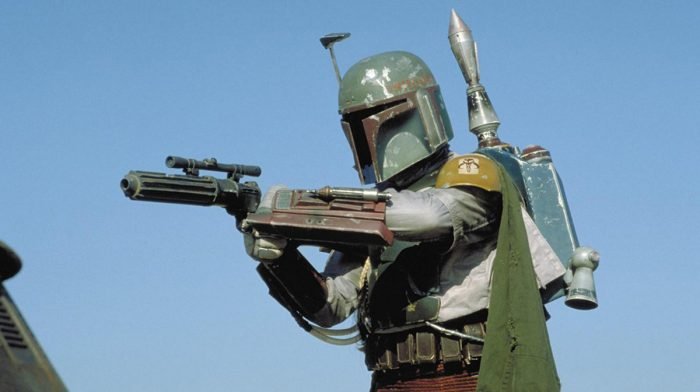 As one of the most renowned and dangerous bounty hunters in the galaxy, Boba Fett manages to overcome his lack of dialogue and screen time to become one of the coolest and most memorable villains in the Star Wars saga.

Boba Fett, like other characters on this list, earns bonus points for his choice of clothing and weaponry. 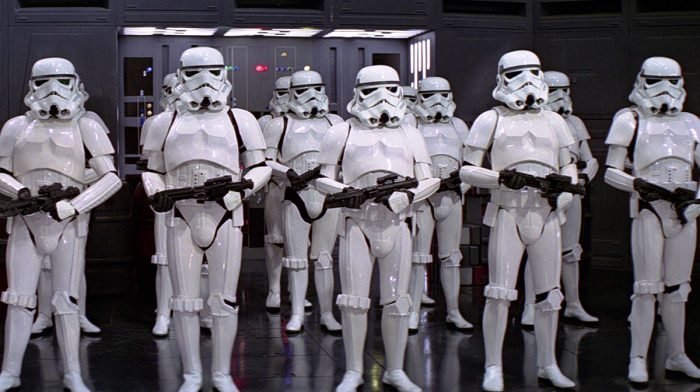 Sometimes it’s the little guys that make the biggest difference!

While most fans wouldn’t count Stormtroopers as genuine villains, they’re perhaps one of the most recognisable and iconic group of baddies in cinema history!

Granted they don’t have the best aim, but a squadron of Stormtroopers has almost defeated our heroes on more than one occasion. 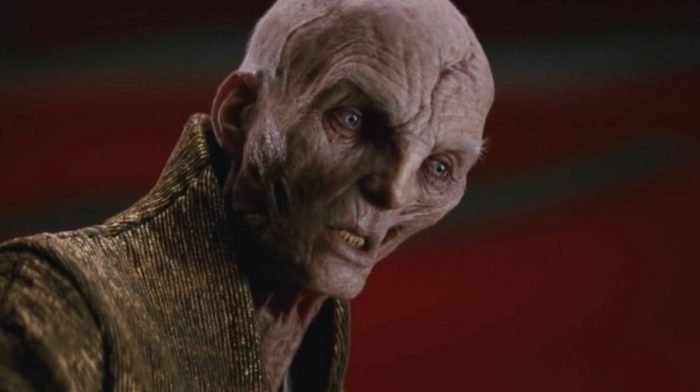 Other than the fact that he was able to seduce a young Ben Solo to the Dark Side, we still know very little about Snoke’s villainous origins, which only makes the former Supreme Leader more terrifying.

Responsible for overthrowing the galaxy, Snoke is easily one of the Star Wars franchise’s most intriguing, powerful and evil villains. 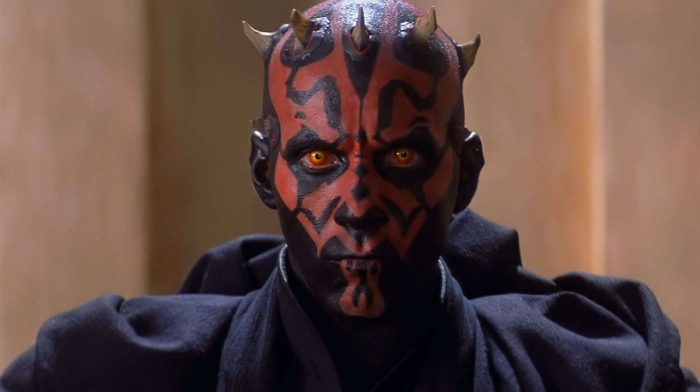 I’d like to tell you that Darth Maul’s double‐bladed lightsaber had nothing to do with his position on this list, but it just wouldn’t be true!

While Maul doesn’t offer much in terms of dialogue, the character’s intimidating physical presence and vicious fighting style makes him one of the coolest Star Wars villains. 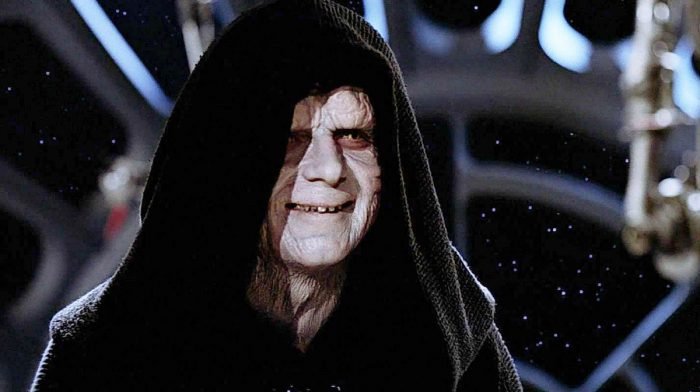 Only the most powerful and maniacal villain could overthrow an entire galaxy!

While Palpatine’s villainous role was kept well hidden in the original trilogy, the character eventually revealed himself to be a truly horrific, immensely powerful and outrageously manipulative bad guy. 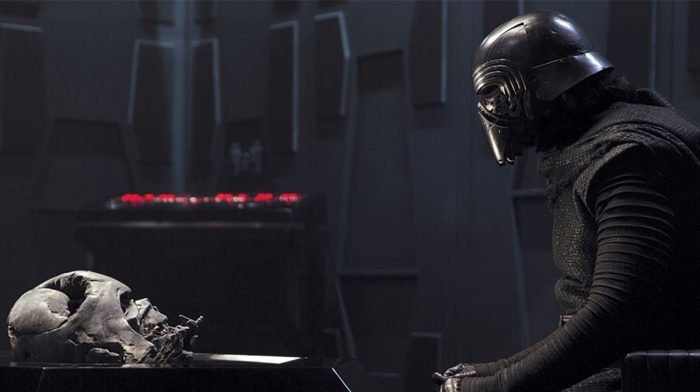 He might act like a hormonal teenager sometimes, but that doesn’t stop Kylo Ren from being one of the most dangerous villains in Star Wars history!

Granted, there’s still plenty to explore when it comes to Kylo’s turn to the Dark Side, but it’s impossible to deny that the character is already one of the most complex, relatable and downright terrifying villains. 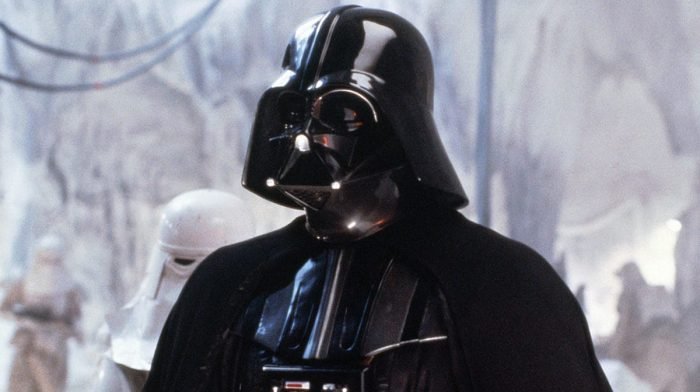 Seriously, who else did you expect to find at the top of this list?

Bringing terror and order to an uncivilised galaxy, Darth Vader is an unflinching force of evil who will stop at nothing to achieve total domination.