This article contains spoilers for episodes one and two of WandaVision.

We returned to the Marvel Cinematic Universe (MCU) today as the highly anticipated WandaVision made its debut on Disney+.

Ushering in a bold new era for the MCU as it steps onto the small screen for the first time, it was great to see the return of both Wanda and Vision in a fun, charming and downright hilarious love letter to sitcoms of the bygone era.

It wasn’t all fun and games though as the episodes currently available to watch definitely hint towards something sinister, with the wider mystery leaving us with many unanswered questions and craving more WandaVision. It’s going to be a long wait until next Friday…

With all that said, let’s take a deep dive into who the beekeeper is, what is happening to Wanda, and what on earth is going on.

Who is creating this reality?

The first question WandaVision leaves us asking is who is creating this pocket reality in which Wanda and Vision are attempting to live ideal suburban lives?

Well it appears Wanda is, as she is able to rewind events when something disturbs the world she has created. Simply saying ‘no’, she turns back time so events can play out in a way she finds satisfactory.

But why has she created this reality? Well, Wanda has been through a lot over the course of the MCU movies which pre-date WandaVision, including the death of her brother Pietro and her beloved partner Vision.

Maybe out of grief she has absorbed herself in this reality to find some comfort and be reunited with Vision, who in Wanda’s world is back from the dead? 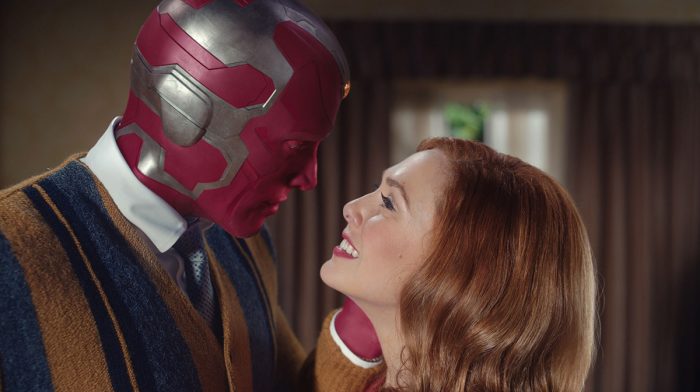 It’s important to note that the popular comic book storyline The House Of M is referenced in the opening episode, with the label on a wine bottle translating to ‘House Of Misery’.

In this storyline Wanda alters the fabric of reality after the death of her children. Maybe she is doing the same here, but this time in response to the loss of Vision?

However, in episode two a voice on the radio calls out to Wanda asking ‘who is doing this to you’, suggesting that maybe she is being manipulated or controlled in some way.

Either that or the person on the radio doesn’t realise exactly what Wanda is doing in this reality, and how much she is in control of it.

Who is the voice on the radio? 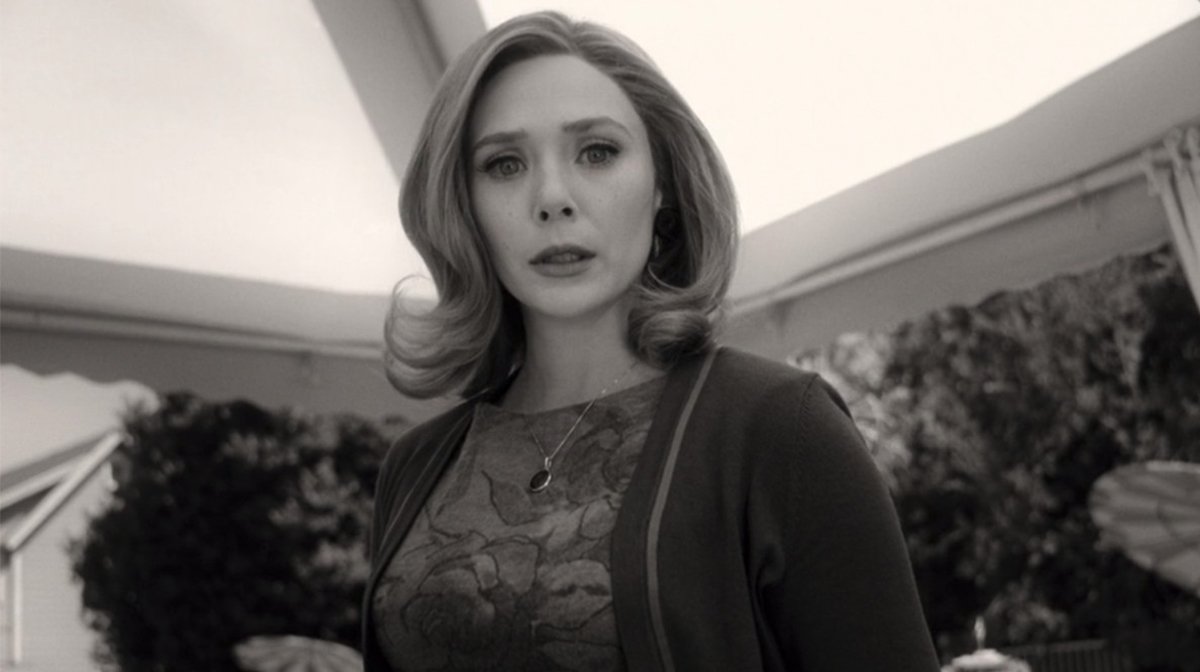 Talking of the voice on the radio, it is clear that someone from outside this reality is trying to reach Wanda, using a radio in an attempt to contact her.

It is likely that this is coming from the person sat in the control room we get to see during the closing moments of episode one, someone who is keeping an eye on Wanda and her reality.

But who is it? What we do know is that it is a male voice, and is highly likely to be someone working for S.W.O.R.D., since we see their logo in the control room.

S.W.O.R.D. (Sentient World Observation And Response Department) is essentially S.H.I.E.L.D. but they mostly deal with extraterrestrial or cosmic threats, and since Wanda has magical powers, she likely falls under their remit.

That would explain their presence here as they appear to be keeping an eye on Wanda, reaching out via the radio, trying to get in touch in what seems to be an attempt to save her.

Who the male voice is exactly though? We don’t know yet, but a case could be made for Agent Woo (played by Randall Park) who we already know is returning to the MCU in WandaVision. 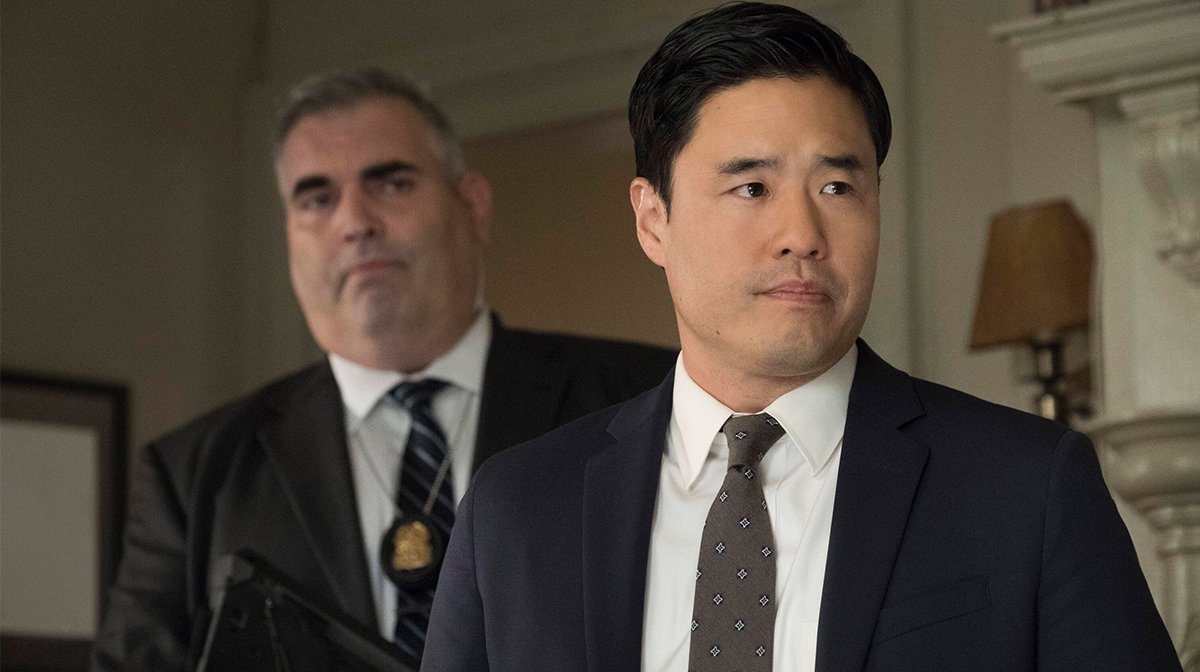 You may recognise Woo from his appearance in Ant-Man And The Wasp, in which he worked for S.H.I.E.L.D. trying to keep Scott Lang under house arrest.

Not only would it make sense for this operative to move to a similar agency like S.W.O.R.D., but more importantly Park is credited with appearing in five of the nine episodes of WandaVision, which could include voice appearances.

Of course these appearances could just be five episodes later on in the season, or Woo is the man on the radio. We will have to wait to find out!

What is with the toy helicopter? 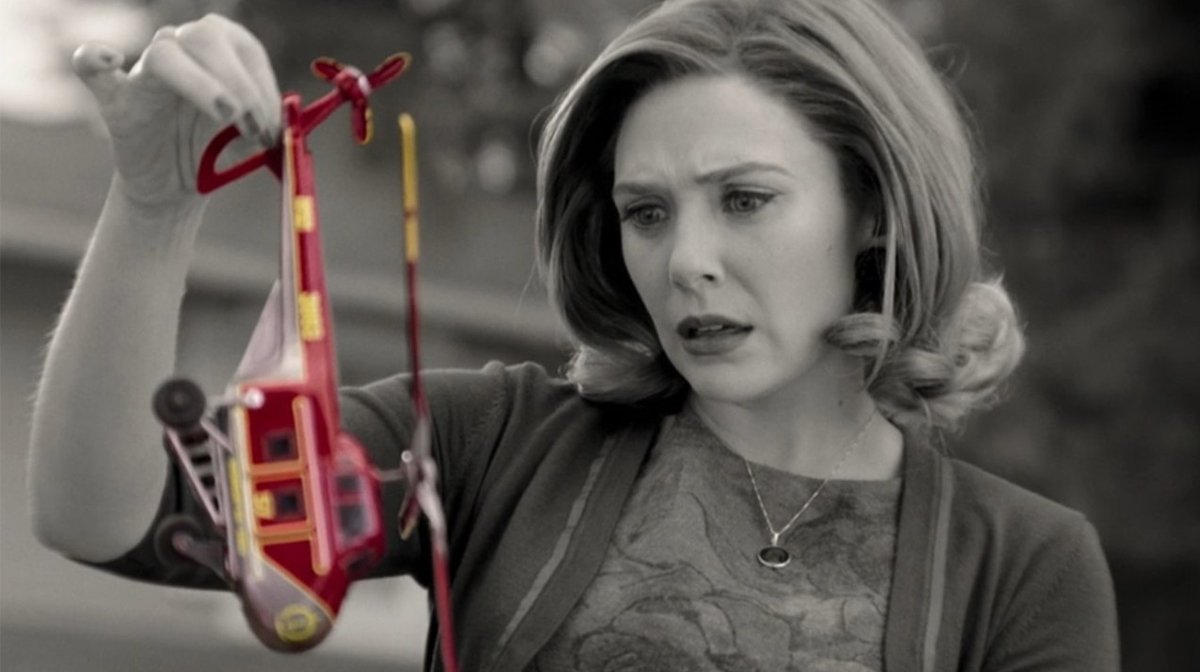 It seems S.W.O.R.D. isn’t just trying to reach Wanda via the radio, as a red and yellow toy helicopter is discovered in her black-and-white sitcom world.

Appearing confused and concerned by the appearance of the helicopter, Wanda isn’t hostile to the discovery, seemingly trying to figure out how it has got there.

The logo of S.W.O.R.D. is spotted on the toy indicating that it came from their organisation, perhaps being another attempt from them to contact Wanda, this time sending something into her reality. 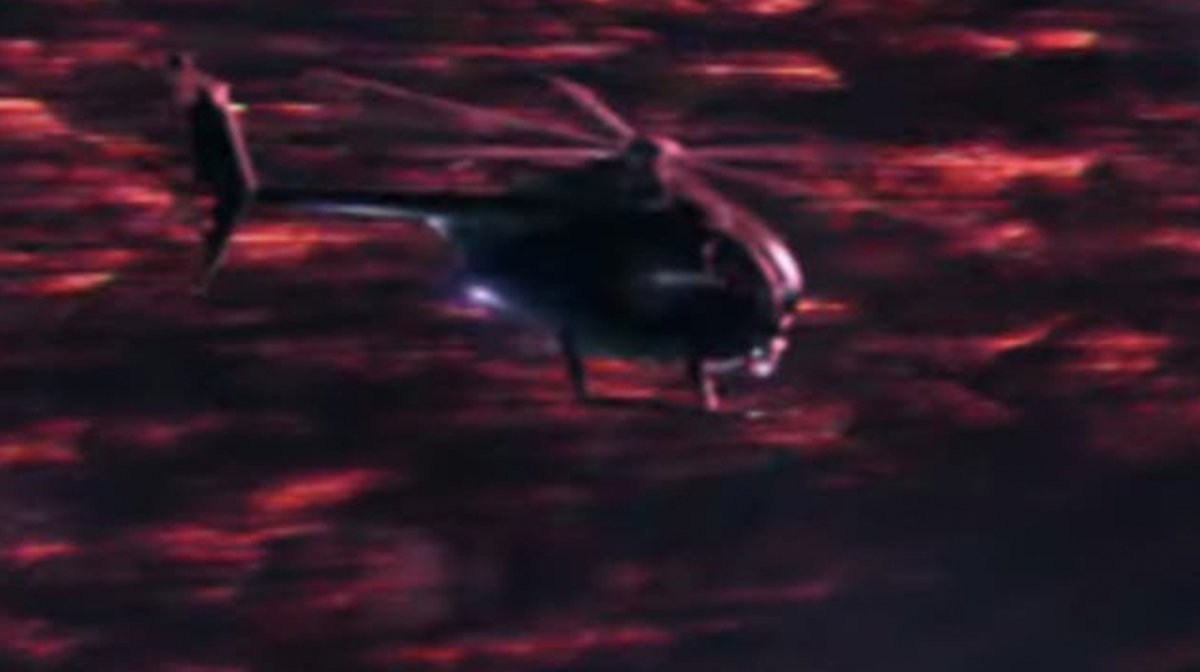 If you recall, in a trailer for the show we got a glimpse at a helicopter flying towards a shimmering red orb. Maybe this orb is Wanda’s reality? And maybe the helicopter turned into a toy when it flew into this world?

And if you are wondering about the pilot? Well, in the same episode in which the toy helicopter appears, so does Monica Rambeau (Teyonah Paris), the adult version of the young girl we met in Captain Marvel.

Introducing herself as Geraldine, maybe Monica was the pilot of this helicopter, losing memories as she too became warped when she enters Wanda’s reality.

Unless she remembers exactly who she is, and is lying to Wanda in an effort to befriend her and help save her from this world.

Who is the beekeeper? 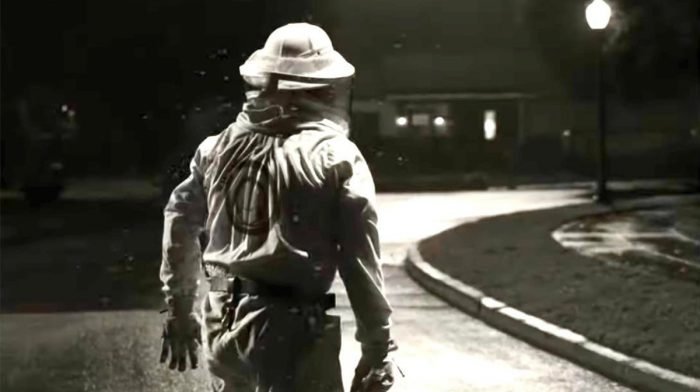 During episode two Wanda and Vision hear a mysterious noise coming from outside, but this time it isn’t the tree making the racket as it did earlier on.

Going outside to investigate, the couple spot a mysterious figure climbing out of a manhole further along down the street.

The tone immediately becomes chillier as we get a closer glimpse at the stranger, who is wearing a beekeeping suit and is surrounded by buzzing bees.

Whilst the figure does briefly turn towards the camera revealing himself to be a man, his face is mostly obscured by shadows so we can’t be sure on who he is exactly. 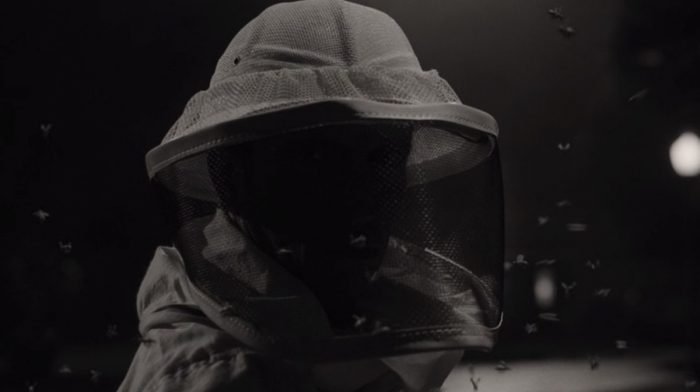 What we do know though is that Wanda didn’t like what she saw, rewinding events and taking us back inside to the moment she reveals the news of her pregnancy to Vision.

The beekeeper is clearly an unwelcome visitor then in Wanda’s eyes, but who exactly is he?

Whilst we can’t be sure, if you take a closer look at the symbol on the back of his suit it appears to be the logo for S.W.O.R.D., suggesting the beekeeper belongs to the organisation.

We already know they are keeping a close eye on Wanda’s reality, so did they send someone into it, hence he comes from underground with the manhole being an entry point into the world? And in that process, did something sinister happen to him, explaining the mysterious outfit and bees? 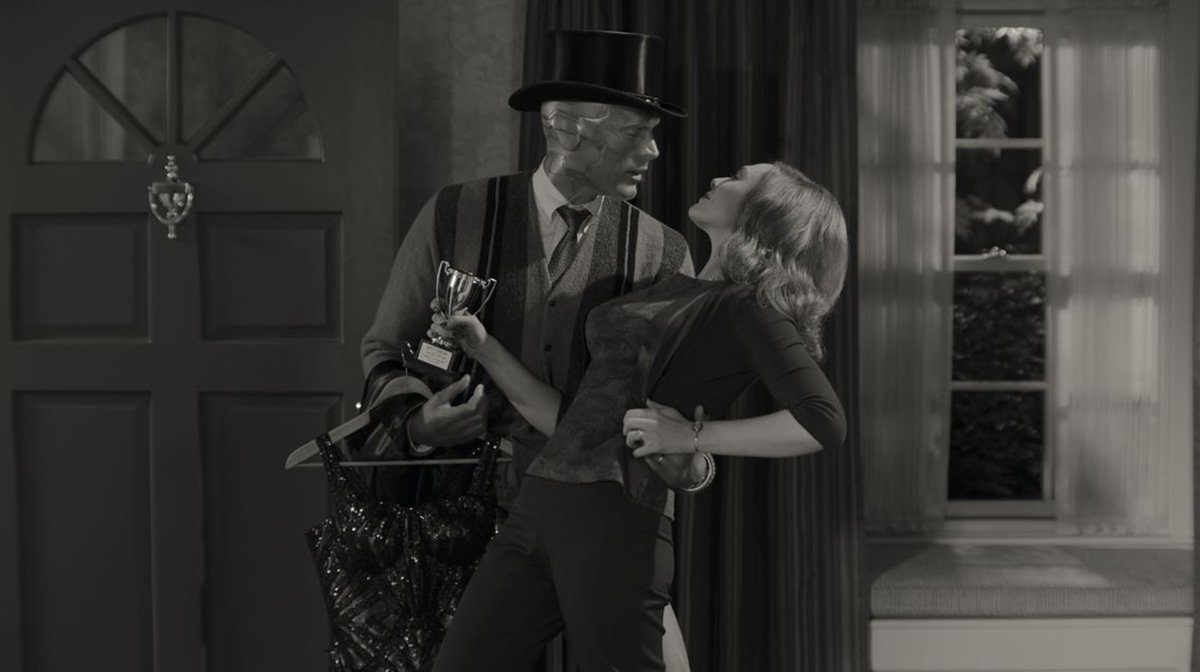 The chilling atmosphere around the figure does indicate that his intent may indeed be malicious, suggesting that maybe S.W.O.R.D. aren’t here to help out at all.

Or maybe we just see him as such because that’s how Wanda views the beekeeper, wanting to keep anything from the real world out so as not to disturb her harmony.

Like with the rest of the above questions, we are sure WandaVision will continue to tease us until a climatic concluding episode, which will ultimately reveal all.

And hey, we can’t wait for it!