What do you call someone who hangs around with musicians? The drummer. Ba Dum Tsh!

Historically, drummers have had quite a rough time of it. Long have they been victim of countless ill-informed jokes, regularly being presented more as beasts than musicians – so much so that the most famous fictional drummer in the world goes by the name of Animal.

Then Whiplash came along, and everything changed. 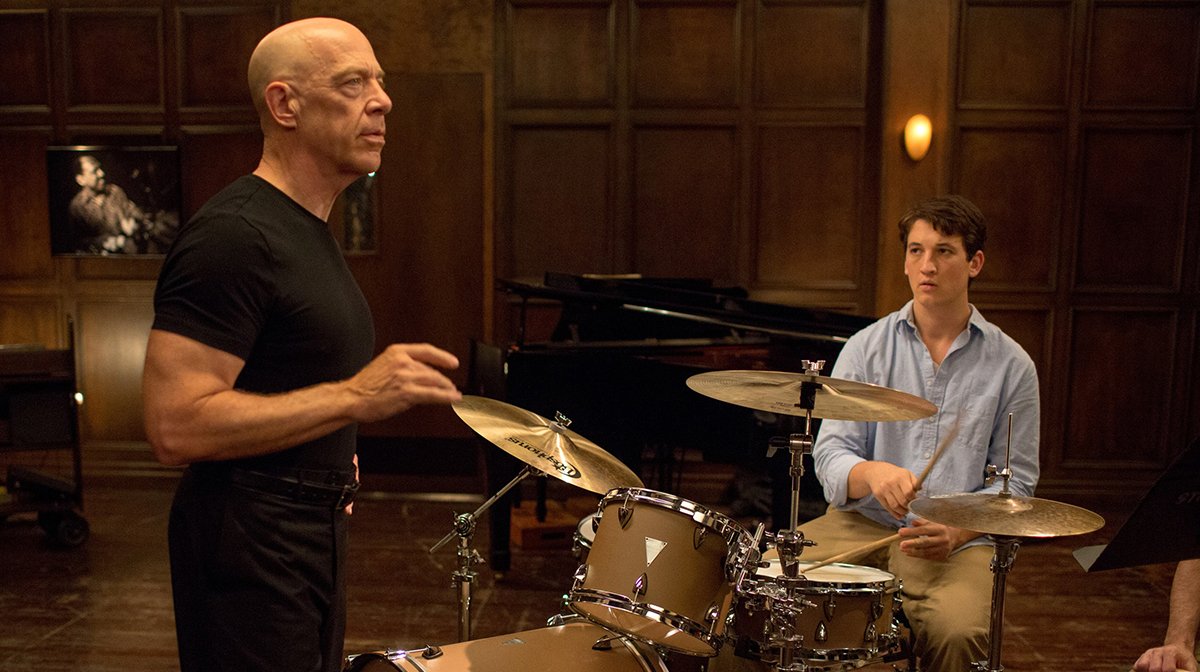 Written and directed by Damien Chazelle, the project started life as an 18-minute short film starring J.K. Simmons as the bristling, brutal Terence Fletcher, an infamously harsh maestro who, having failed to become a musical legend himself, has dedicated his life to creating one – whatever the cost.

The short film premiered at the 2013 Sundance Film Festival to critical acclaim, and was soon adapted into a full-length feature.

Simmons resumed his role as Fletcher, while Miles Teller was brought on to play Andrew Neiman, a talented young jazz drummer with dreams of stardom. 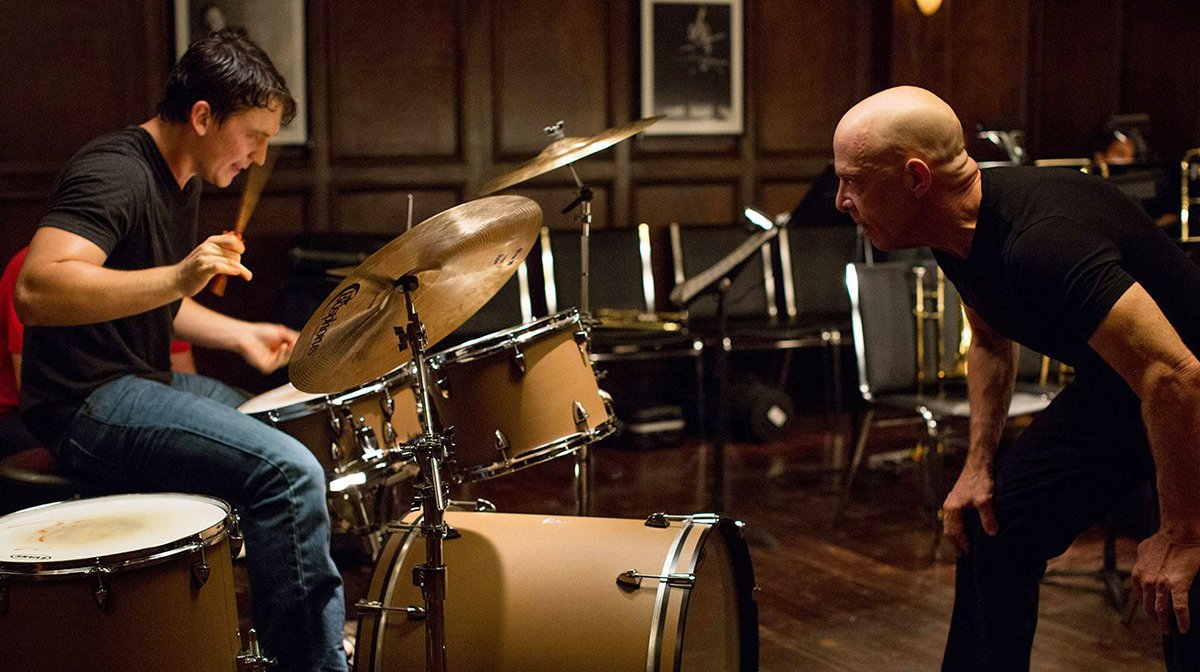 Neiman is already great, but that’s not enough. He needs to be the greatest, and he sees Fletcher as his best chance at becoming so.

It’s a unique, twisted take on the usual teacher/pupil dynamic. An abusive, violent and deeply, deeply parasitic relationship that pushes them both to the very edge – and one which bagged Simmons the Oscar for Best Supporting Actor at the 2015 Academy Awards. 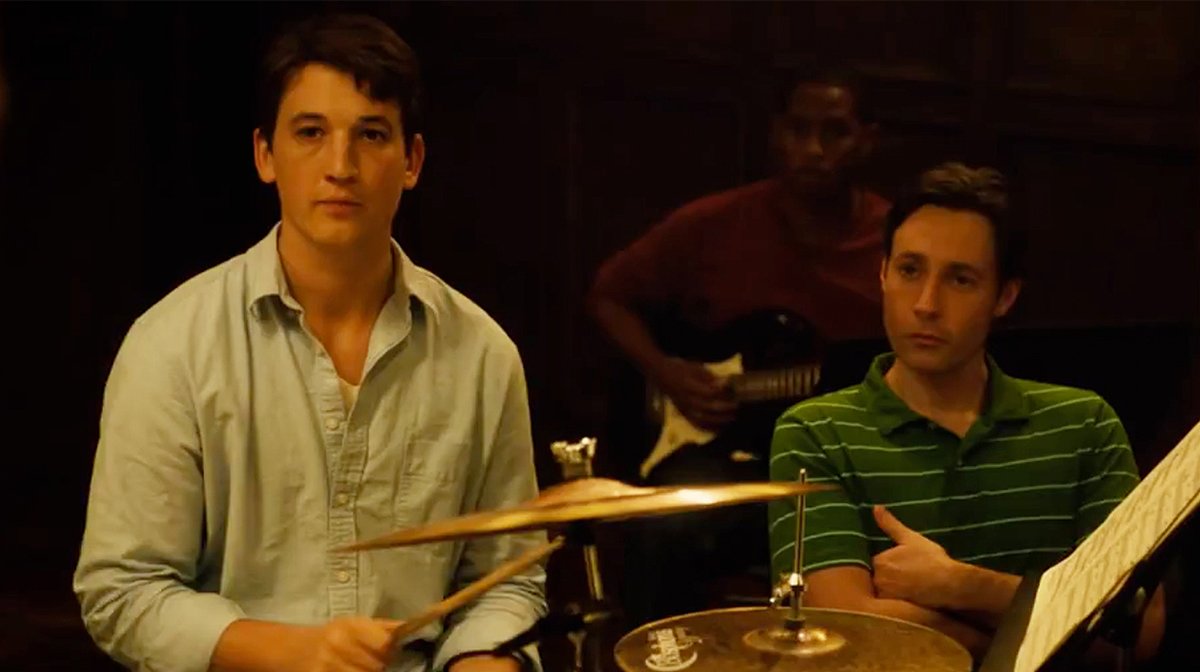 Considering the film’s relatively tight run-time (106 minutes), Chazelle manages to cram in an impressive amount of depth, particularly among the main cast.

Fletcher remains an enigma from beginning to end, his true motives quickly becoming a shadow that hangs ominously over the whole film. Does he truly want the best for Neiman – forcefully moulding him into ‘one of the greats’ – or is it simply a ruse for Fletcher to take out his aggression at having never been one such great himself? Does he even know the answer?

It’s a complex question, and one which is ultimately left for us to decide ourselves.

Neiman is a more straightforward character, but nonetheless compelling as he slowly sacrifices every single aspect of his life in pursuit of his dream, straying closer and closer to obsession along the way. 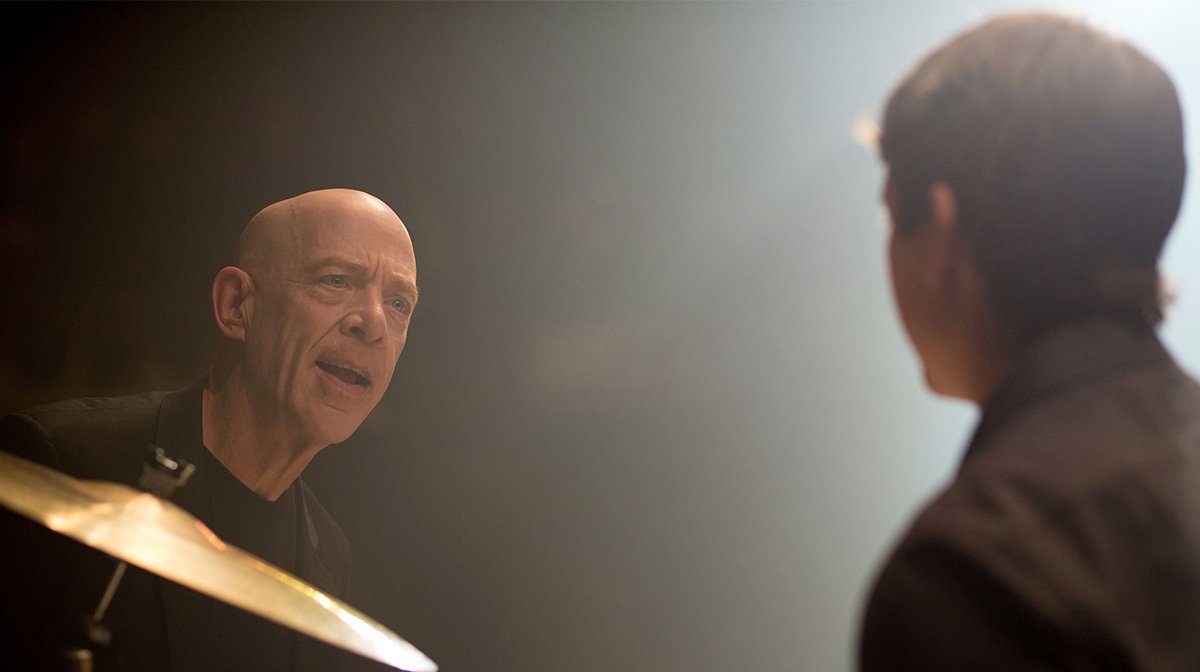 One of Whiplash’s greatest achievements is the way it manages to balance, intertwine and move these two story-lines forward in a way that constantly impacts the other, all the while creating a sense of pace and rhythm that causes every single minute to flash by like a drum roll.

That it manages to create this sense of momentum without giving up any of the tension, anxiety or looming dread that fuels the story is even more impressive, and something for which Chazelle deserves a huge amount of credit.

The film has drawn numerous comparisons to Darren Aronofsky’s Black Swan, and with good reason. Both won a slew of Oscars, both made a huge profit with relatively small budgets, and both focus on perfectionism in its most pernicious, self-destructive form. 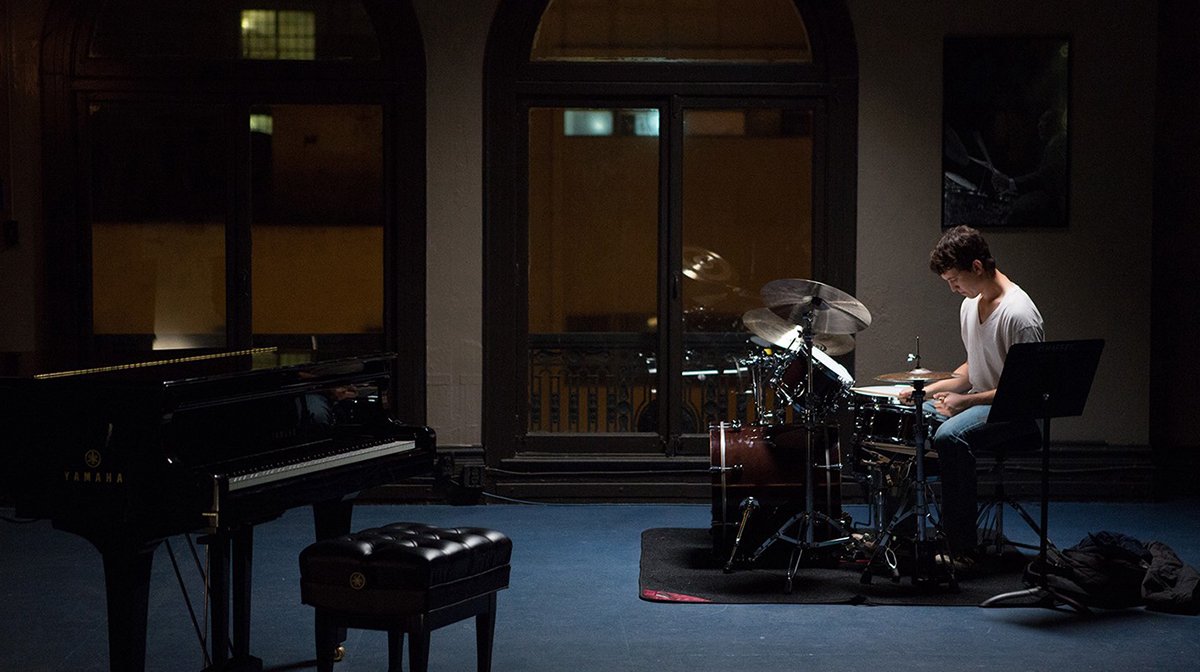 Something Whiplash does better than any of its peers, however, is capture the raw, aggressive physicality of the art form it’s portraying.

High level drummers such as Neiman aren’t simply musicians – they’re athletes – and Chazelle refuses to let you forget it.

The old adage of blood, sweat and tears is taken toe-curlingly literally here, owing more to Rocky than Ringo Starr, and it’s not long before Neiman’s determination begins to resemble something verging on madness. 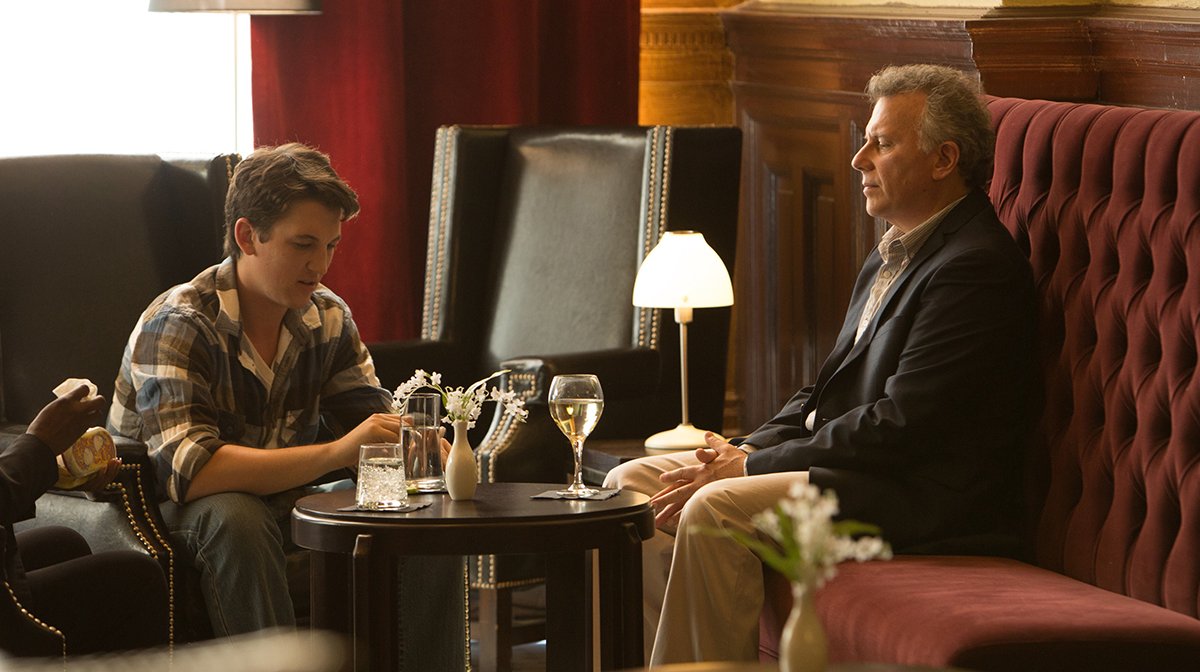 From the young drummer’s first starry-eyed band practice, to his final, bitter face-off against Fletcher, each performance raises the stakes higher and higher, building the pressure to an almost unbearable degree before culminating in a furious finale that feels as much like a bare-knuckle brawl as a jazz performance.

Special mention must be given to Tom Cross, Chazelle’s longtime editor, for injecting each crash of the cymbals and smack of the snare drum with a sense of speed and adrenaline that elevates every scene – a feat which earned him both the BAFTA and Academy Award for Best Editing.

This, alongside Chazelle’s excellent direction and trim script, result in what is quite possibly one of the most efficient, streamlined and powerfully pointed films in recent memory.

La La Land may remain Chazelle’s most popular work, but it’s this tale of talent and obsession that established him as one of the most promising young filmmakers to emerge in years – and it’s easy to see why. 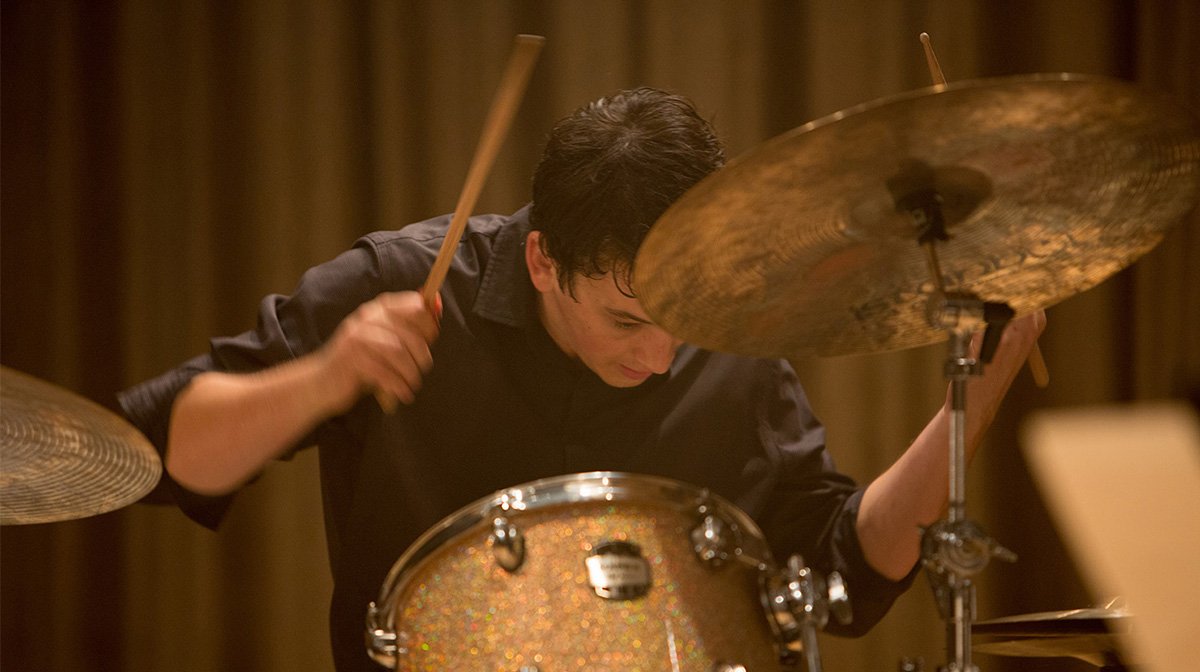 Whiplash is not only a thoughtful, furious, adrenaline-fuelled ride through the dark underbelly of perfectionism; it’s a masterclass in pitch-perfect pacing, razor-sharp editing and fat-free script-writing, topped off by an unforgettably vicious performance by Simmons that cements it as one of the greatest films of the past decade.