It has been long-rumoured that Dwayne Johnson’s Black Adam film would bring an extended cast of recognisable superheroes to join him on the silver screen, with the Justice Society Of America (JSA) seeming the most likely.

And now, courtesy of DC FanDome, we have official confirmation that the Shazam villain will be accompanied by no less than four members of the JSA: Hawkman, Doctor Fate, Atom Smasher, and Cyclone.

But just who exactly are the Justice Society Of America?

Origins Of The Justice Society Of America 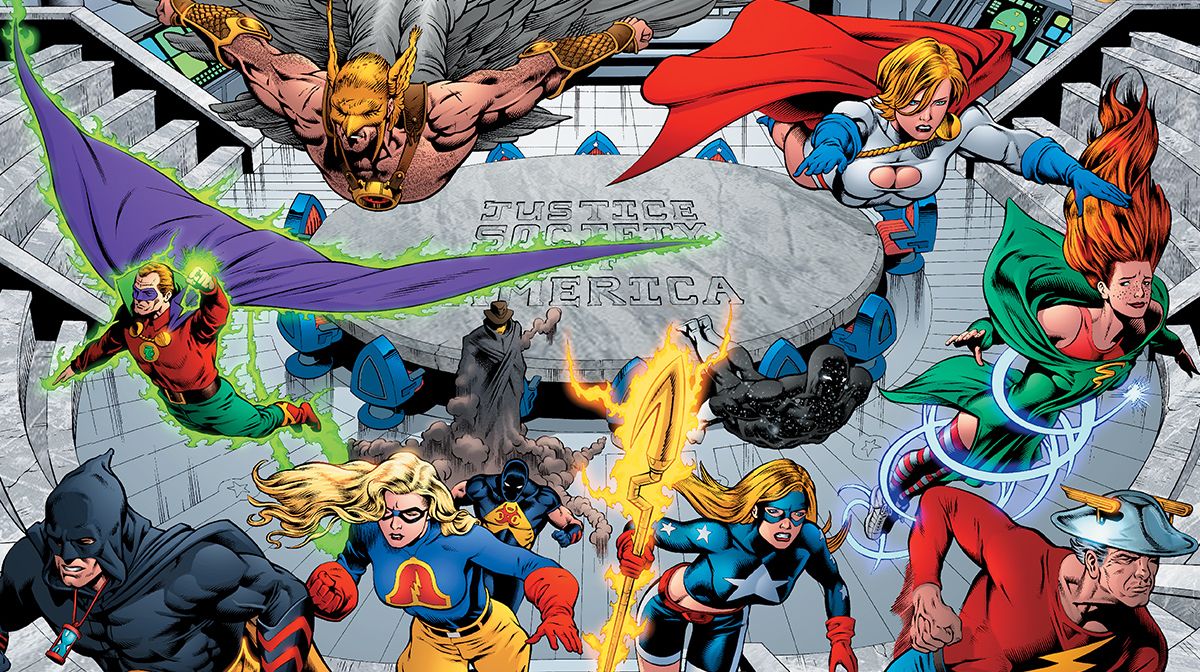 The JSA find their routes all the way back in the Golden Age of comic books, created by Sheldon Mayer and Gardner Fox — first appearing in All Star Comics #3 in the early 1940s. As such, they are widely recognised as the original superhero team of the DC Universe, formed in response to the events of World War II.

Existing over decades, both on the pages of DC Comics and in the real world, the JSA boasts a long line-up of recognisable heroes, spanning generations.

Many of these characters have made multiple live-action appearances on the small screen across Smallville, The CW’s Arrowverse, and Stargirl. 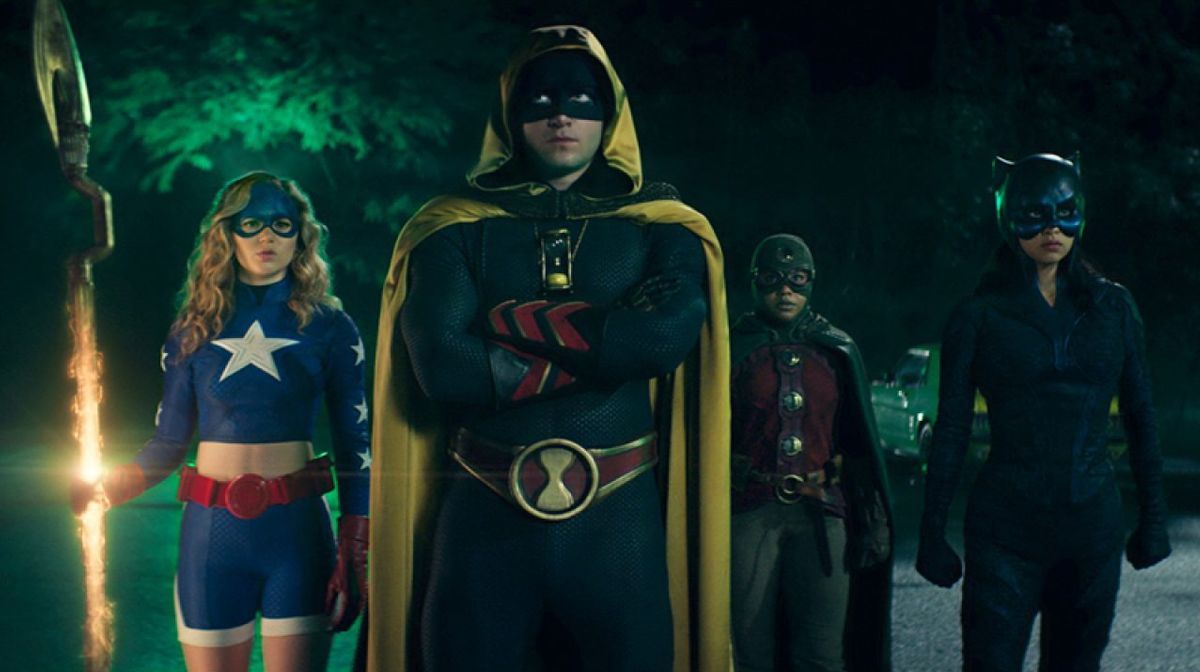 Stargirl is the most recent show to bring the JSA to life, focusing on the legacy of the formative team and providing only brief glimpses of the seminal heroes, instead bringing to the forefront a new generation of young high schoolers to claim their mantles.

During the Black Adam panel, it was confirmed that Johnson’s title character will be going head-to-head with the superhero team, elevating them to the world of blockbuster cinema.

But which of the JSA will be joining the fray? 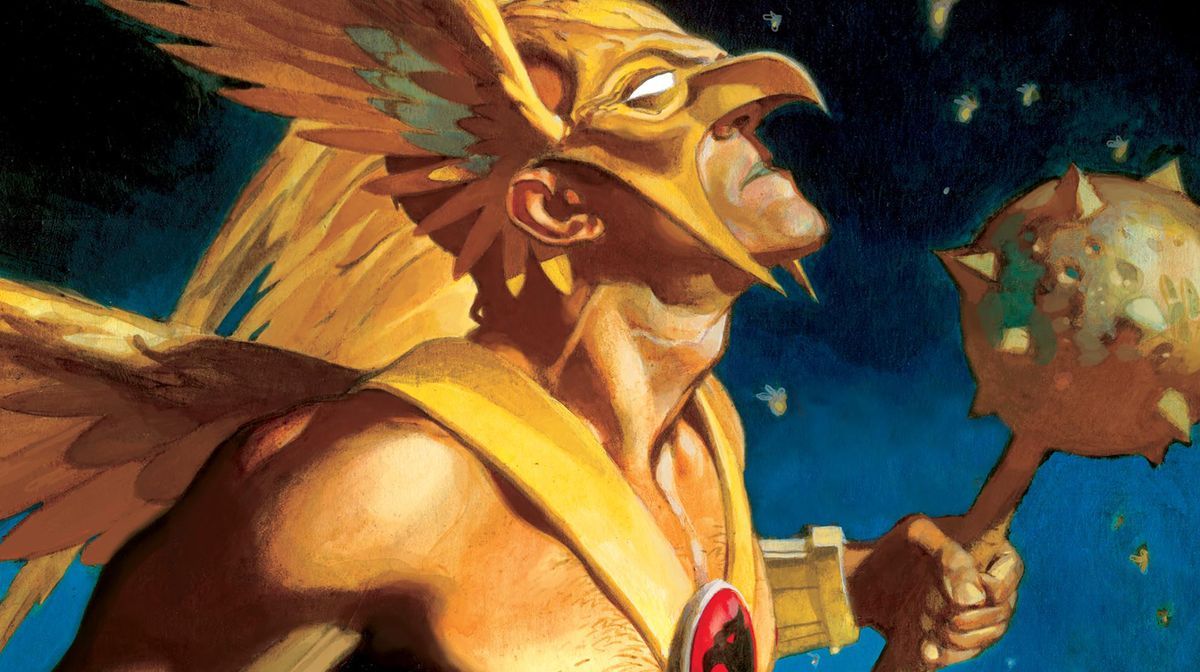 First appearing in Flash Comics #1 in 1940, Carter Hall bears the moniker of Hawkman and is one of the founding members of the JSA.

Conceptualised as an American archaeologist during the early Golden Age of comics, Hawkman is the reincarnation of an Ancient Egyptian prince — Khufu.

Modern comic book incarnations would see Khufu interact with Black Adam, seeking out a spaceship from the planet Thanagar, prophesised to appear by the wizard Nabu. 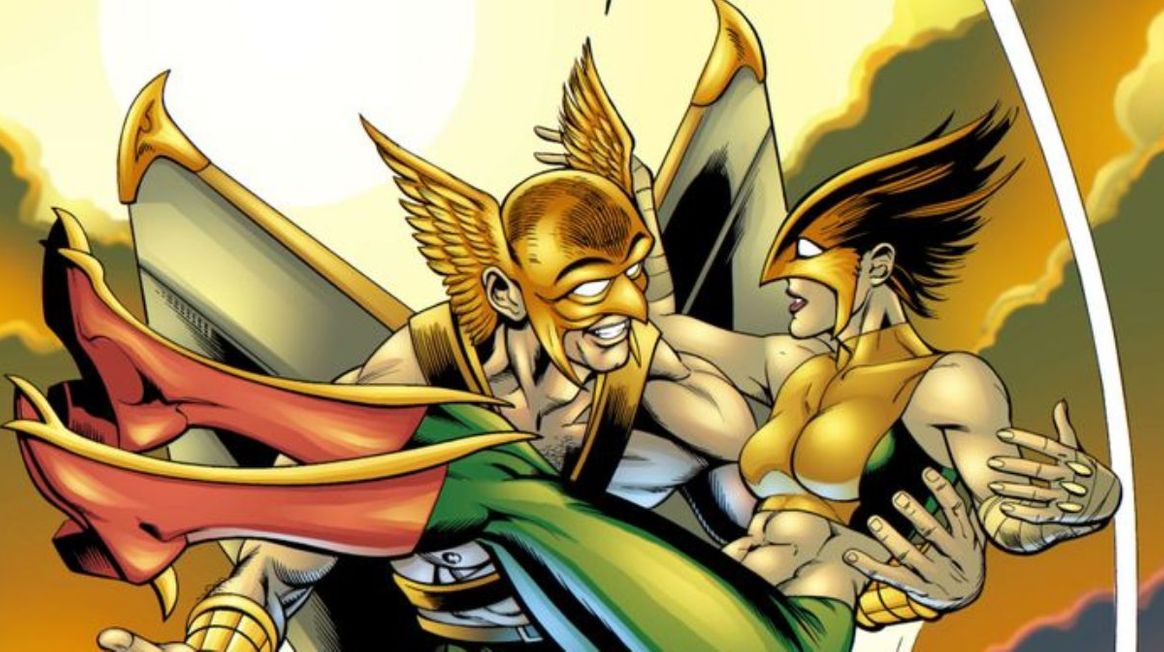 Discovering the mysterious Nth metal element in the remains of the ship, Khufu would craft a gravity-defying belt and series of weapons, unwittingly implanting both he and his beloved Chay-Ara (later known as Hawkgirl) with the collective knowledge of Thanagar.

Subsequently murdered with an Nth metal knife by the priest Hath-Set, both Khufu and Chay-Ara are cursed to reincarnate across many lifetimes, and they are similarly cursed to be murdered at the hands of this villainous priest.

Bringing this tale to life in live-action, actor Aldis Hodge will be portraying Hawkman in the Black Adam movie. 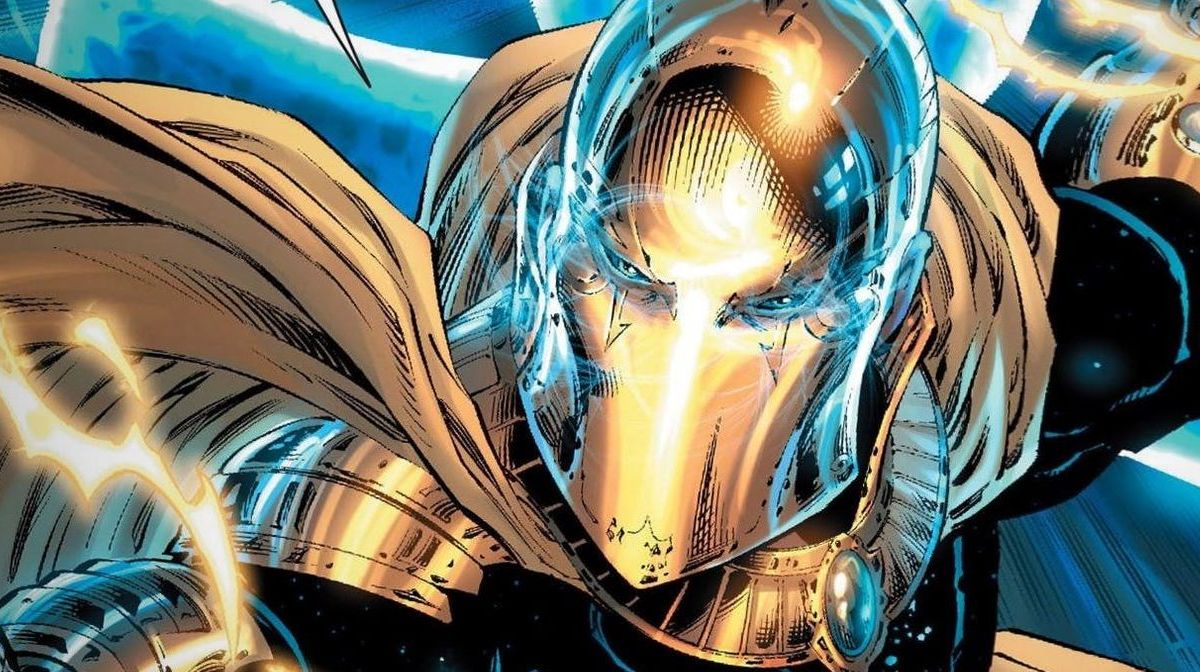 Another original member of the JSA, Kent Nelson is a powerful sorcerer and agent of the mystical Lords Of Order, utilising powerful artefacts created by the ancient being Nabu — including his distinguished Helmet Of Fate.

Opening the tomb, Nelson unwittingly released a poisonous gas. Though himself unharmed, his father was not so fortunate, being struck dead. Out of sympathy for the child, Nabu taught him the art of sorcery.

Now equipped with the knowledge of the mystic arts, Kent donned the title of Doctor Fate, proceeding to fight crime and the evil world of the supernatural, eventually joining the JSA in their debut comic. 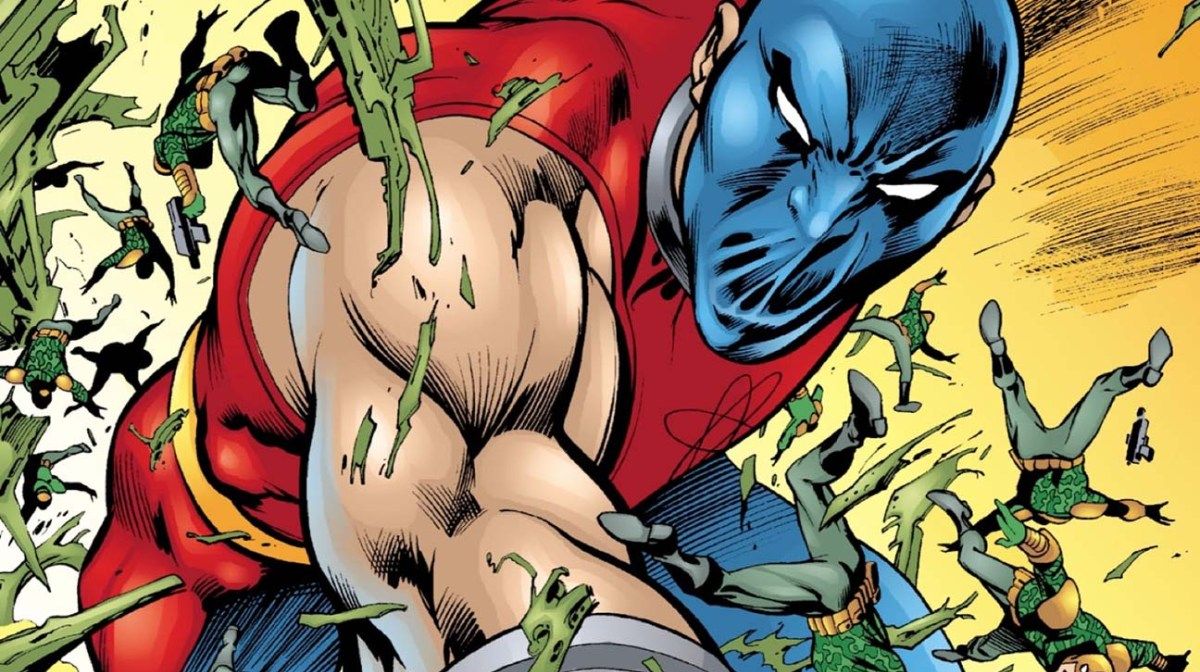 The first officially confirmed JSA cast member, Noah Centineo is set to play Atom Smasher — who is said to be a new recruit during the events of Black Adam.

Otherwise known by his true name of Albert Rothstein, the film appears to be closely following his comic book origins, as he sought to join the team early in his career under the hero name of Nuklon.

Created in 1983 as part of All-Star Squadron #25, the character would later take on the title of Atom Smasher, upholding the legacy of his godfather — the original Atom (Al Pratt) — a lineage which would inspire him to join the JSA. 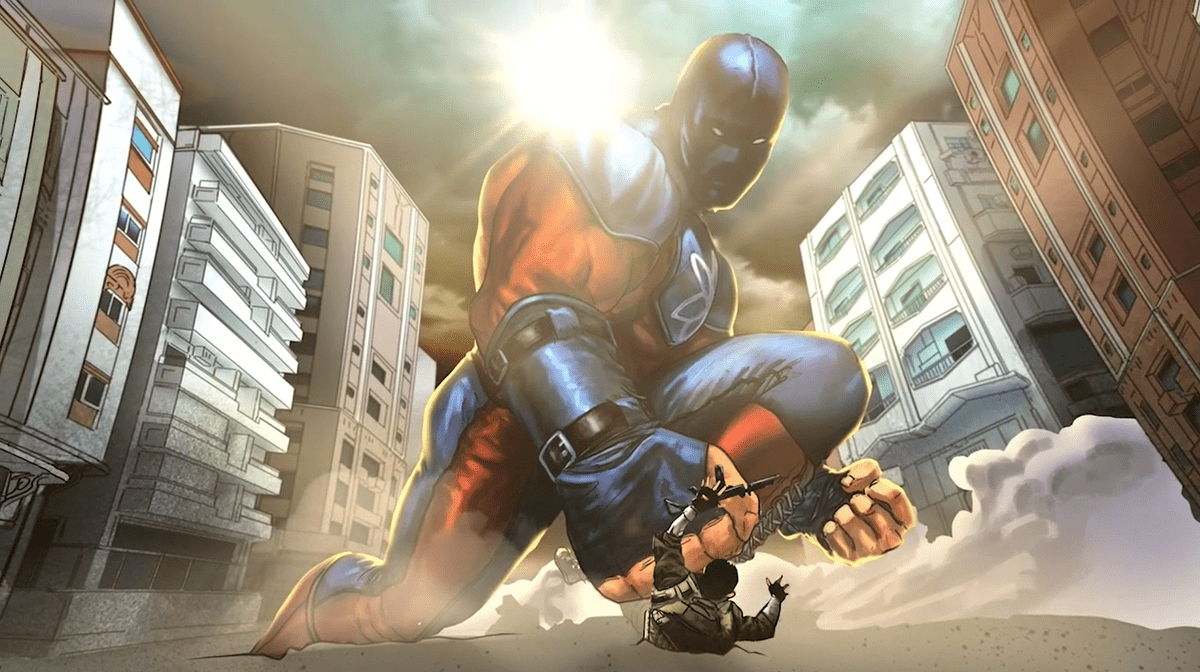 Atom Smasher shares a complex family tree with more than just the Atom, inheriting the ability to manipulate his molecular structure from his villainous grandfather, Cyclotron, allowing him to increase his size to incredible stature — reaching heights upwards of 60 feet.

Using his incredible abilities, Rothstein would become a founder and prominent member of the new JSA, appearing as a staple part of the team in most modern iterations. 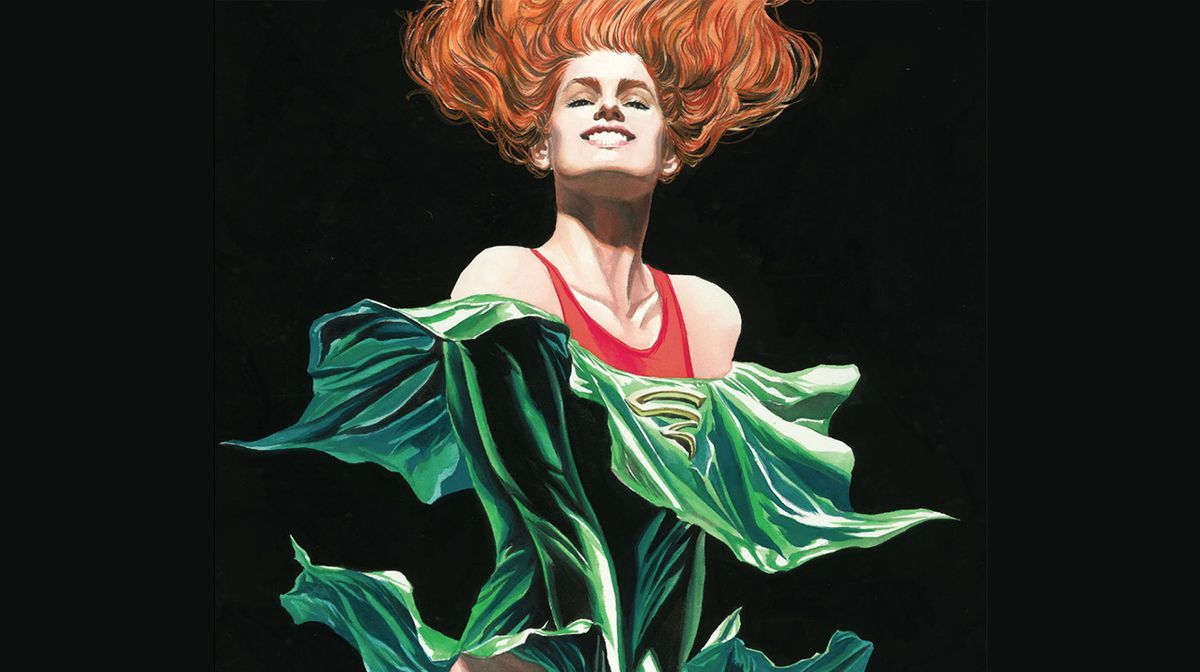 Cyclone (Maxine Hunkel) was created by esteemed comic writer Geoff Johns and debuted in Justice Society Of America #1 in 2006.

She is renowned as the granddaughter of the original Red Tornado, Abigail Hunkel, who was an honorary member of the JSA and the modern caretaker of their headquarters.

As a result of her familial ties, Maxine was kidnapped at the age of six by mad scientist T.O. Morrow (creator of the second robotic Red Tornado) and infected with ‘nanobytes’, which granted her wind-manipulation powers. 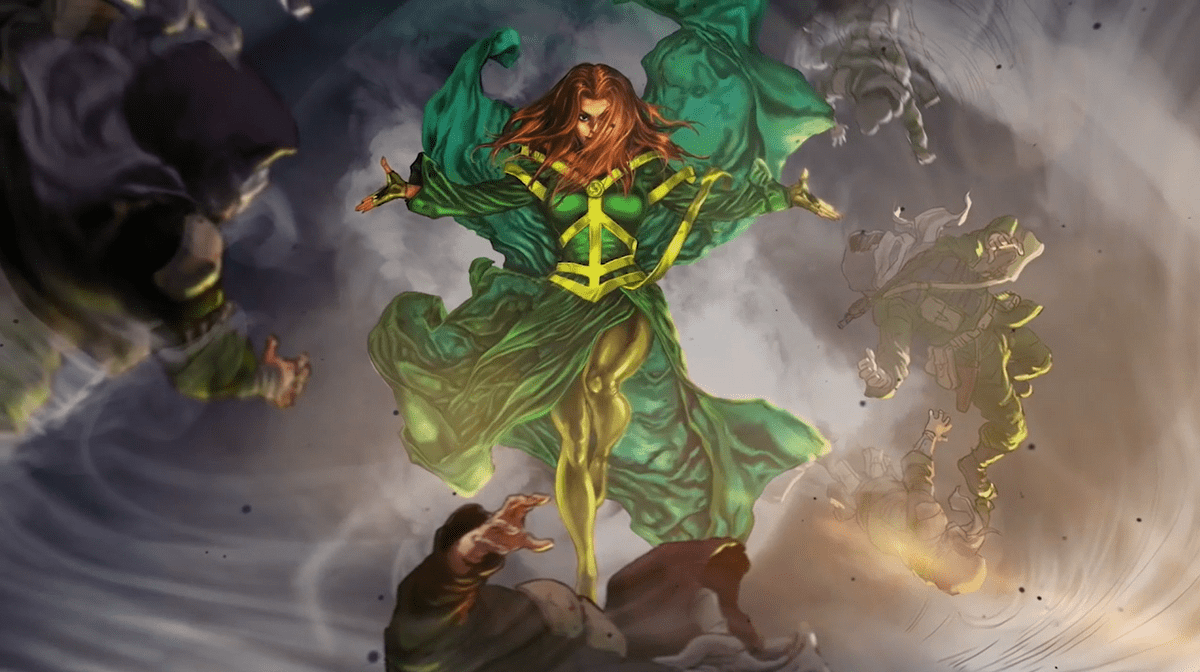 A clear candidate to join the JSA, due to her lineage and abilities, she was eventually invited to join the team, ultimately embracing her superhero role as Cyclone in Justice Society Of America #3.

Black Adam is currently set to release in December, 2021. Check out Zavvi’s wide selection of DC merchandise for more from the Justice Society Of America.