If there’s been any serious challenger to make that four reasons, surely it has to be Alfonso Cuarón’s ironically-titled, seven-time Oscar-winner, Gravity.

This stunning space thriller, starring Sandra Bullock and George Clooney as two astronauts cast adrift when their shuttle is destroyed by satellite debris, is as perfect a showcase as you’ll find for everything great about the past ten years of cinema, and as a bridge between the physical filmmaking of old, to the boundaries of digital wizardry yet to be passed. 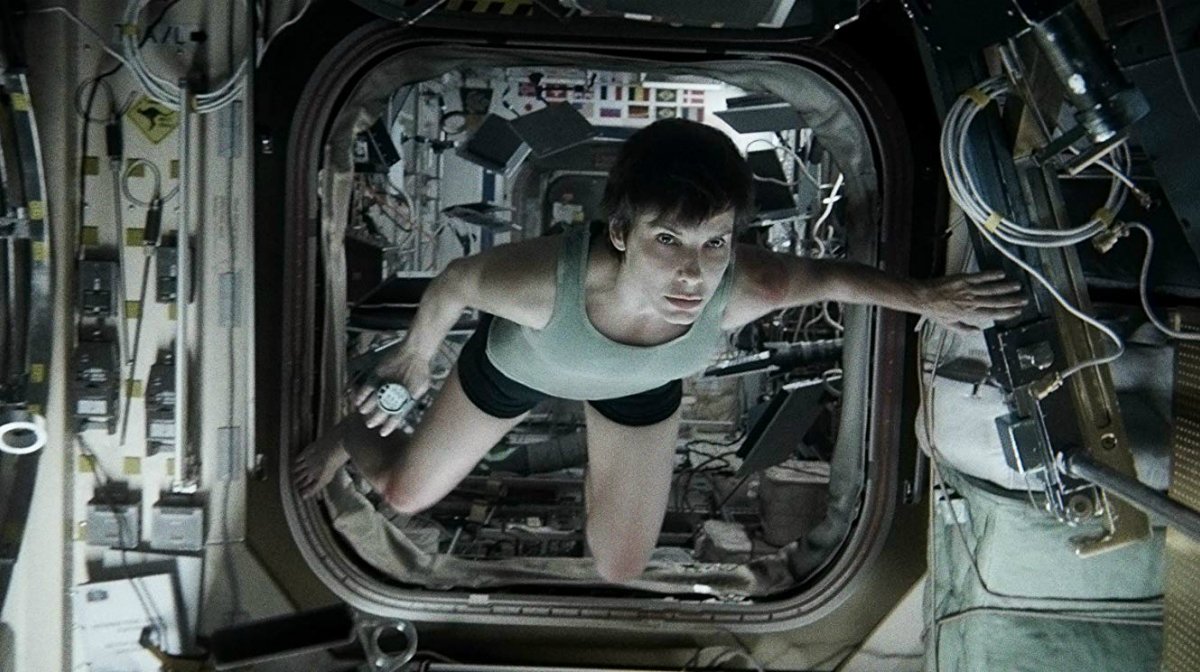 If there’s been one standout message from the world of mainstream cinema this decade, it’s been a fervent desire for better variety in central roles for women.

Before Rey called the Skywalker lightsaber to her, before Wonder Woman stepped into No Man’s Land, and Captain Marvel shook off the shackles of male authority, we had Bullock as androgynous mission specialist Ryan Stone.

A medical doctor assigned to help introduce new technology to the Hubble Telescope, she is ill-prepared for the oncoming calamity – she screams, she flails, she cowers in her suit like the stereotypical supporting women of endless action movies past. 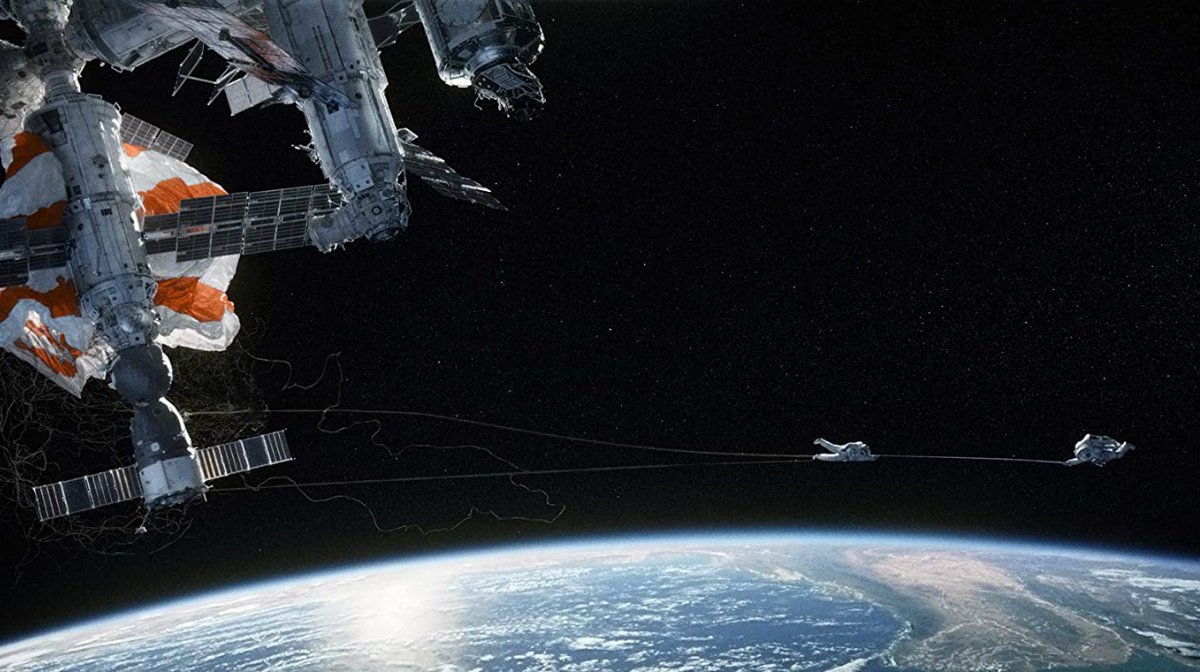 Once old hand Matt Kowalski (Clooney) is lost to the abyss, she is reborn (Cuarón deals in some wonderful symbolism here) into the competent, complex lead demanded by the much-needed sea change in Hollywood.

Spurred on by Matt’s pragmatic sensibilities and the love for her deceased daughter, Ryan finds the strength to survive; a winning, believable mix of calm logic and searing emotion.

Years before Matthew McConaughey, Ryan Gosling or Brad Pitt cried out across the universe for their loved ones, Cuarón and Bullock set the first and finest example of this emerging ‘space is sad if you’re a mum or dad’ template.

The epic climax of this arc can also be seen in the DNA of The Martian’s swirling finale, or Pitt’s tussle with space debris in Ad Astra. 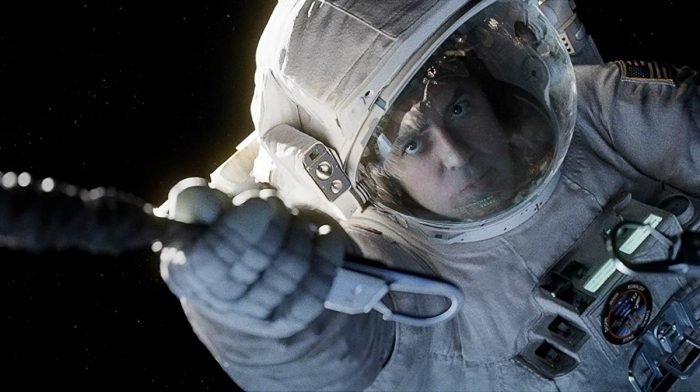 Even without Bullock’s powerhouse performance, Steven Price’s music, by turns explosive and elegiac, sells the emotive heart, and then some.

His music (like many of Gravity’s best elements) fuses the traditional and the futuristic, as shrieking electronics coalesce with haunting strings.

Glorious vocals from Katherine Ellis instil the crucial human heart, not least in the soul-stirring finale. If you can survive the image of burning debris shooting over the surface of the Earth – accompanied by Price’s heart-wrenching score – without weeping or feeling waves of goosebumps, you haven’t got the volume high enough. 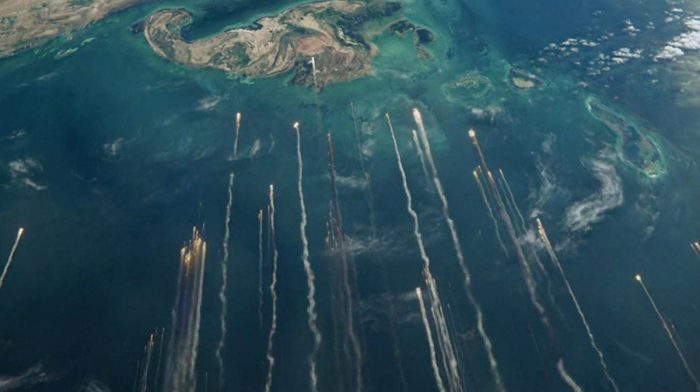 Achieving this level of cinematic perfection demands an incredibly precise collaboration between the worlds of physical stunt work, visual effects and animation. In many ways, one could argue for Gravity’s status as an animated movie, full-stop: only the faces of Bullock and Clooney remain as purely physical elements, with the movements of their limbs tracked and recreated digitally.

And yet the film’s physicality is never in question.

From the creases in spacesuit sleeves, to droplets of water bobbing strangely in zero-g, everything carries a level of realism and tangible weight that helps sell the larger-scale effects, such as the shattering of the ISS, or the cinema-shaking re-entry sequence that could easily carry a lesser film all by itself. 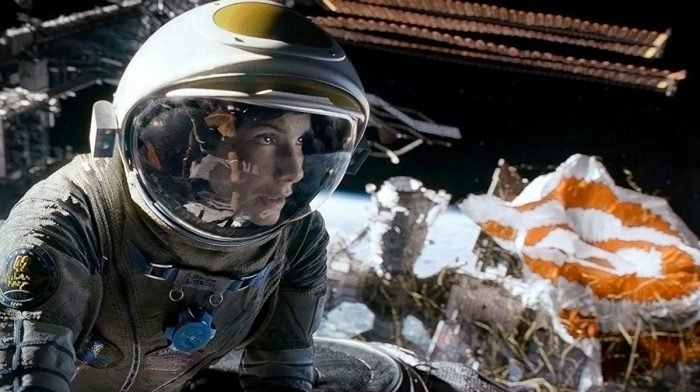 All this is captured by masterful cinematography from Emmanuel Lubezki in a painstaking endeavour that requires not only the actual shooting of actors on complicated rigs, but careful guidance of digital artists in post-production.

His preference for long, unbroken takes has become a bit of an in-joke in film fan circles now, but these were still fresh enough at the time to make a serious impact, especially for a CG-heavy, crowd-pleasing blockbuster.

Such meticulous attention to visual detail and a lack of jarring, quick-cut edits allowed for a jaw-dropping 3D experience at a time where the format had largely become a tacked-on industry standard. Even noted sceptics of stereoscopy (such as the BBC’s Mark Kermode) heaped praise upon Cuarón’s use of 3D technology to enhance Gravity’s tumble-dryer-come-ballet aesthetic. 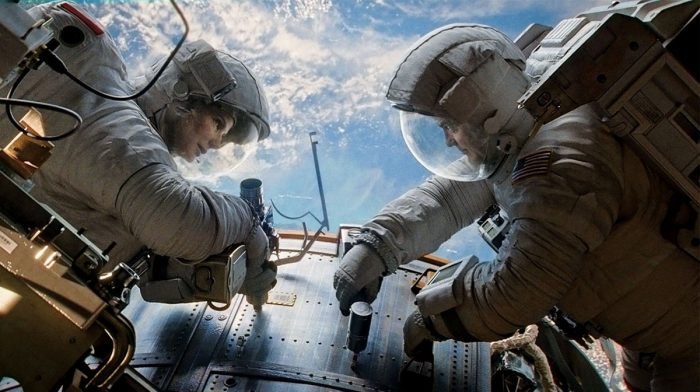 Allowing the visuals to speak for themselves with minimal dialogue and characters also elevates this film above the exposition-laden, ensemble cast-driven extravaganzas favoured by the majority of studio tent-poles this decade.

There is an economy of storytelling here that belies the enormity of the production, and ensures the stakes are always clear.

The brilliance of this simplicity – a Point A to Point B struggle to survive – melded with extraordinary technical complexity is why Cuarón’s film will endure.

Gravity’s perfect harmony of future-proofed technological advancement with a tale as old as time makes it the clear candidate for film of the decade.