Dwayne ‘The Rock’ Johnson’s long-anticipated Black Adam movie has been in development for over a decade now, but it is finally set to hit the silver screen in 2021, pushed to the forefront with the release of a bunch of new details and a preliminary teaser during DC FanDome.

Though the teaser provided an intriguing first glimpse at the title character, we’re here to breakdown who exactly Black Adam is and what his arrival means for the greater DC film universe moving forward. 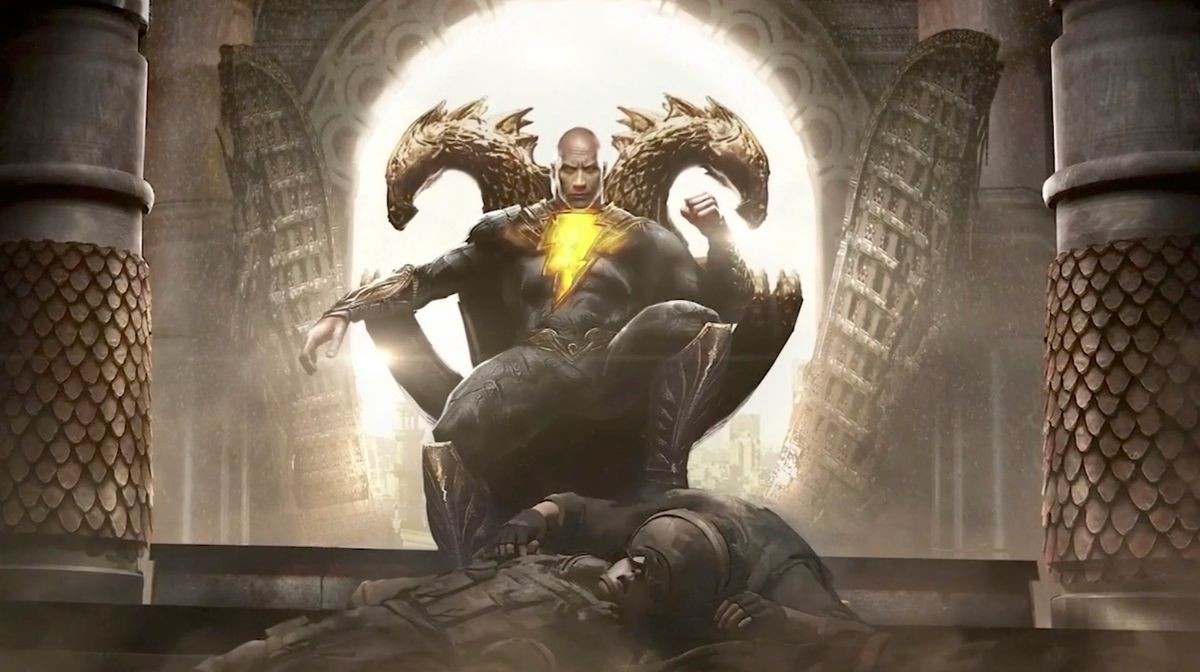 Teth-Adam (Black Adam) made his debut on the pages of DC Comics in the 1970s, after being acquired from Fawcett Comics — where he first appeared in The Marvel Family #1 in 1945.

Throughout his long history, the character is most well-known for his antagonistic relationship with the superhero Captain Marvel (Billy Batson), as the historical predecessor to the power of the Wizard Shazam.

Eons before the birth of the World’s Mightiest Mortal, Black Adam was born in the fictional African nation of Kahndaq, his origins being depicted as both a prince and, more recently, a slave. 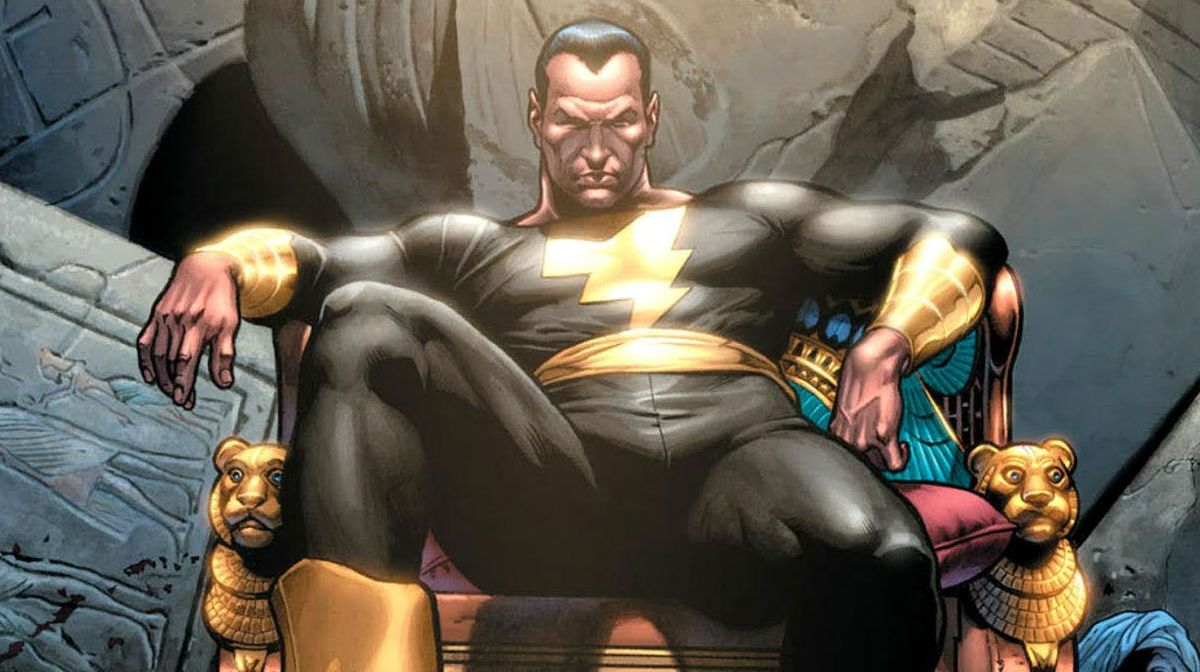 Granted the power of Shazam, Black Adam used his newfound abilities of strength, flight, speed, invulnerability, and magic to liberate his people from the oppressive tyrants that ruled with an iron fist.

But this power proved too destructive in the hands of Black Adam, and he was eventually sealed away by the Wizard for abusing his gift, where he would remain until ultimately being released in the modern day.

Starting off as an entirely villainous figure, more modern iterations of the character present Black Adam as an anti-hero, pitting him alongside the recognisable heroes of the Justice Society Of America (JSA), and elevating him to the position of king and protector of Kahndaq.

What Can We Expect From The Film? 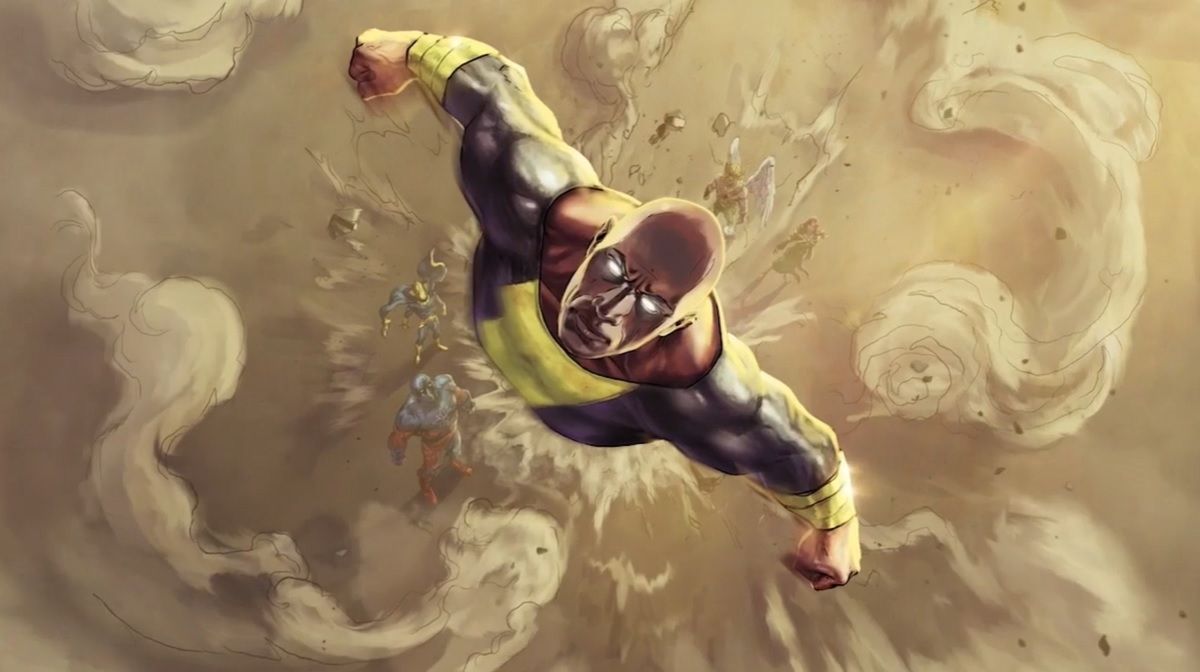 Black Adam’s film adaptation appears to be staying loyal to the established mythology of the fan-favourite character, retaining his modern comic book routes as a slave and defender of Kahndaq.

Johnson has also promised that Black Adam will not be reduced to your stereotypical hero or villain, embellishing “his own sense of justice”.

This anti-hero status of Black Adam is set to take centre stage, going head-to-head with the might of the JSA.

So far, Hawkman (Aldis Hodge) and Doctor Fate are confirmed as the veteran members of the group, bringing in two new recruits, Cyclone and Atom Smasher (Noah Centineo), to join their ranks.

Centineo has said that Black Adam and the JSA take a different approach to fighting bad guys, with a line from Black Adam supporting this statement: “I have a knack for destroying bullies, but there are some [the JSA] who think I need help.”

Although, it would appear that there might be a little something more to this conflict than contrasting ideals, with the Eclipso diamond sighted in the teaser trailer, known from the comics for corrupting the minds of all who come into contact with it. 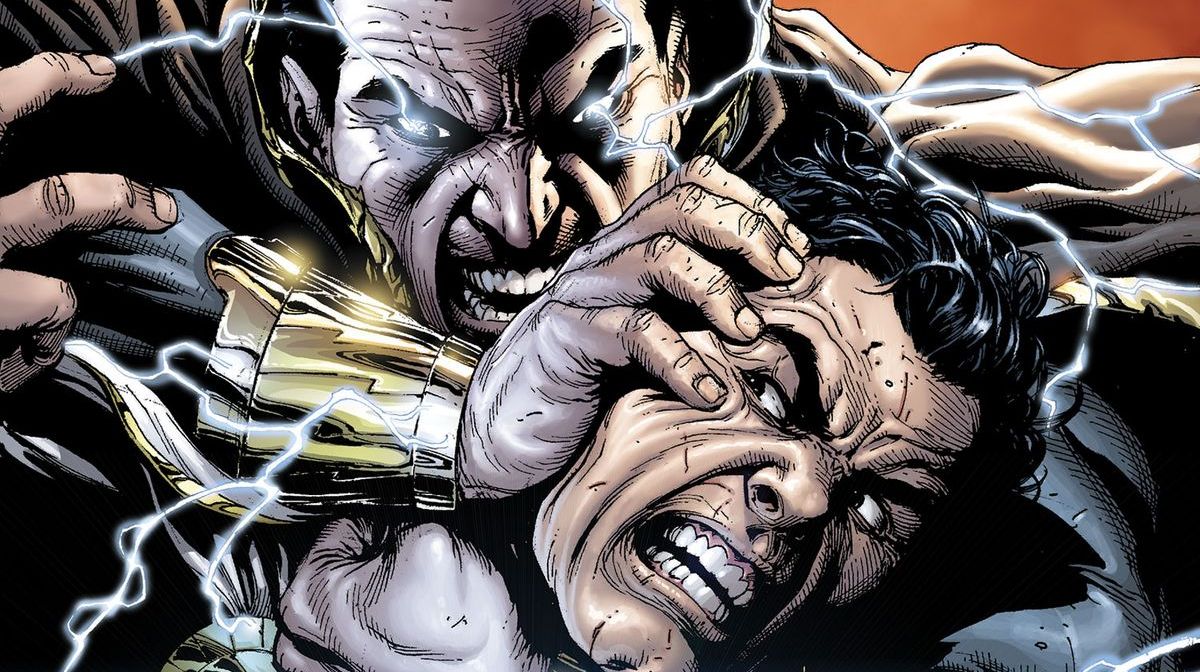 It is no surprise to anyone that a future crossover between Zachary Levi’s Shazam and Johnson’s Black Adam is inevitably on the horizon. What form this will take, however, is another discussion entirely.

The formative 2019 Shazam film drew heavily from the New 52 comic book reboot by Geoff Johns, which featured Black Adam as the central villain of the story.

Yet, the film was notably absent of his presence, instead having his antagonistic role filled by Mark Strong’s Doctor Sivana. 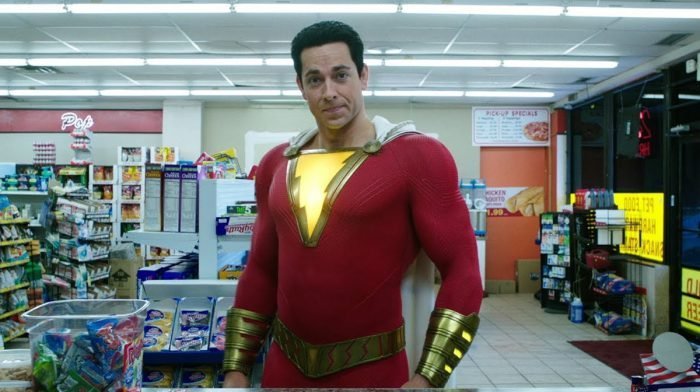 With this divergence from the established comic book continuity, it is clear that Black Adam is being set-up as his own standalone character, making him more than just your typical one-and-done villain.

As such, expect his role to be much more in line with the headliners of the DC universe, presented as Shazam’s peer rather than a mere obstacle to be overcome in a sequel. 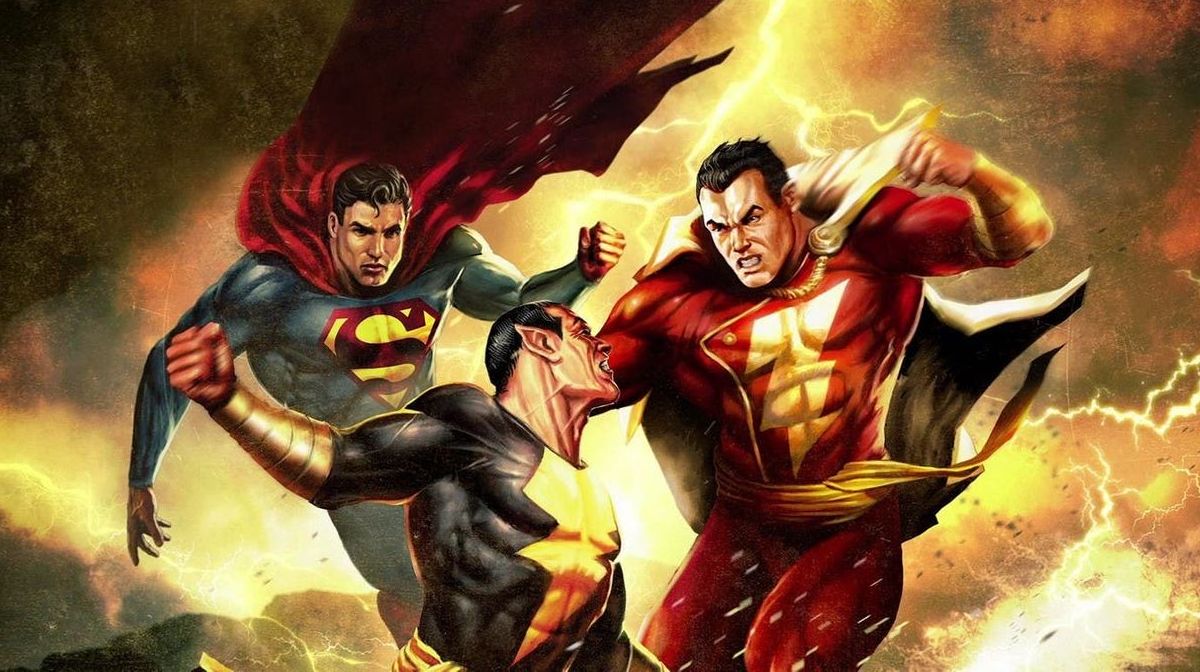 Both Johnson and the masterminds behind DC films have made it clear that Black Adam’s time in the DC Universe is only just beginning.

As declared by Johnson during the Black Adam DC FanDome panel: “The hierarchy of power in the DC Universe is about to change…”

During a series of questions, Johnson announced that his number one choice for Black Adam to go on an adventure with would be Wonder Woman, believing them to be a powerful pairing.

However, Johnson followed this up with a nod towards Superman — a character who was emphasised multiple times throughout the panel. 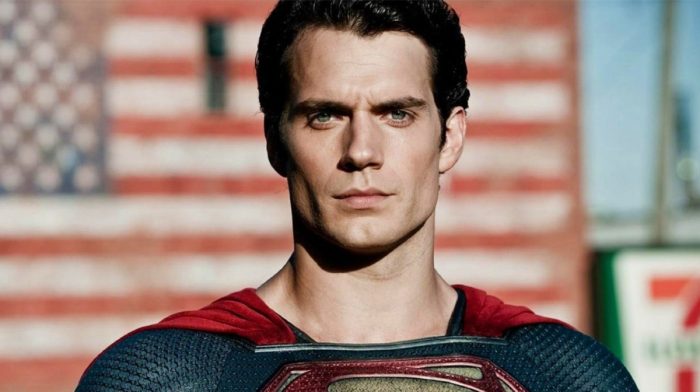 Johnson has existing friendships with both Gal Gadot (Wonder Woman) and Henry Cavill (Superman), the latter of which he shares an agent with, so none of these propositions are off the table.

In fact, Black Adam has an established precedent for interacting with the Man Of Steel, joining Billy Batson to go toe-to-toe with the character in 2010’s animated short film Superman/Shazam!: The Return Of Black Adam. And he also united with Superman’s regime in NetherRealm Studio’s Injustice video game franchise. 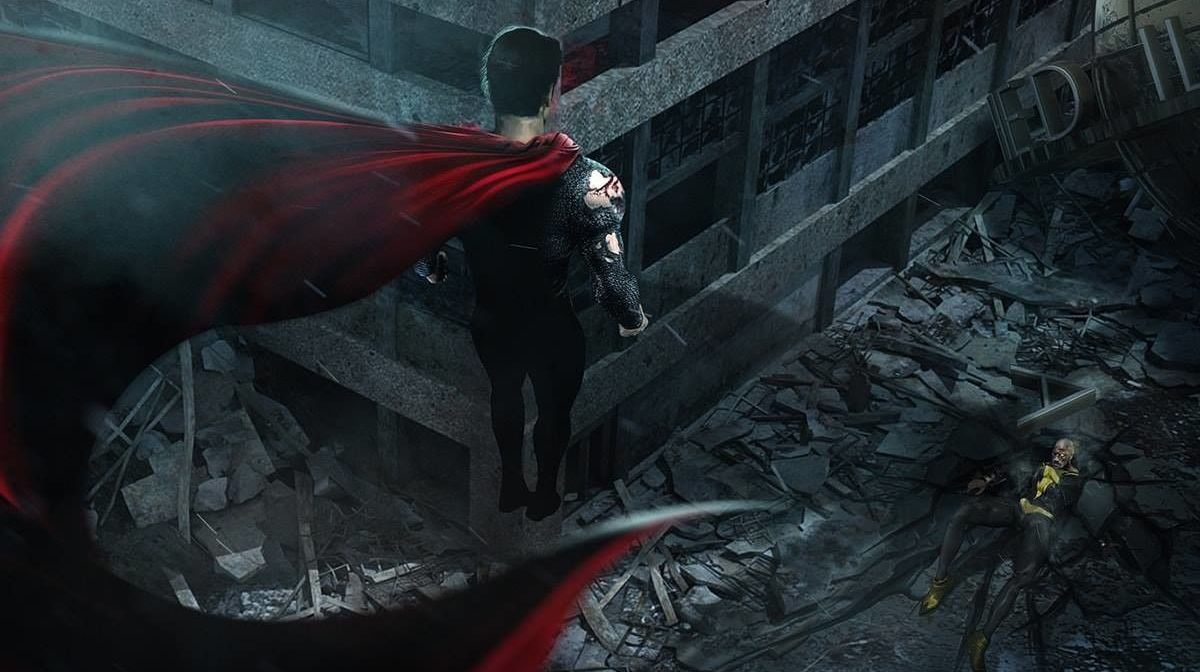 Additionally, in 2018, Johnson teamed up with BossLogic to produce a piece of artwork depicting Black Adam pitted against the legendary Last Son Of Krypton, which was released with the approval of DC Comics boss Jim Lee.

Although this is technically unofficial, this proves that there is a desire to make this encounter happen.

Black Adam is currently set to release in December, 2021. Check out Zavvi’s wide selection of DC merchandise for more from your favourite heroes and villains.