Looking for the best Captain America gifts? We’ve got you covered!

Captain America is one of Marvel’s leading characters, and it will come as no surprise to find out that he has a lot of fans out there.

Captain America (a.k.a. Steve Rogers) is the patriotic super-soldier who got his powers through being injected with scientist Dr. Abraham Erskine’s super-soldier serum. With super strength, speed, agility, endurance and lightning-fast reactions, Captain America is one of Marvel’s most popular characters, and one of the founding members of the MCU’s Avengers.

Originally a comic book character, the hero has fans of all ages – those who grew up avidly reading about Cap’s adventures in the comics, and those who have grown up watching the epic Marvel films starring Chris Evans in the titular role. 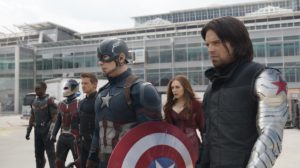 He truly is a unique character and many fans love him for his standout costume with the American flag motif, his heroic moral compass, and the vibranium shield which he uses in battle.

If you’re a fan of the first avenger and are looking for the latest merchandise to complete your collection, or if you’re looking to buy a gift for a Steve Rogers obsessed friend, our handy guide will be sure to help you out.

As Captain America would say, ‘I can do this all day’.