Specs, Games, Pricing & More: Everything You Need To Know About The Nintendo Switch

What is the Nintendo Switch?

Previously known as the NX, the Nintendo Switch is the brand-new console from the stalwart game developers. After a reveal event in January, Nintendo has announced the price and launch lineup of their next console, which combines handheld and home console systems into one, referred to as a ‘Console-Portable Hybrid”. We’ve summarized all the coolest features of the Nintendo Switch here.  Check out the hardware overview from Nintendo below.

The Nintendo Switch consists of the Tablet console itself, which holds all the internals and power, two ‘Joy-Con’ controllers which can slide onto either the tablet or the included Joy-Con grip for a more traditional controller feel. Games will be cartridge based, while also being available digitally on Nintendo’s eShop. There comes 32gb of internal storage in the Nintendo Switch, however, it also has a MicroSD Slot where you can expand the storage up to 2TB. Additionally, the console uses a USB Type-C Connector to charge and dock into the stand, where it then outputs to a Television and then have access to several other USB ports. The Switch will launch with the latest entry in The Legend of Zelda franchise, with the latest Super Mario game coming in Winter 2017.

Nintendo Switch allows gamers the freedom to play however they like. It gives game developers new abilities to bring their creative visions to life by opening up the concept of gaming without boundaries. 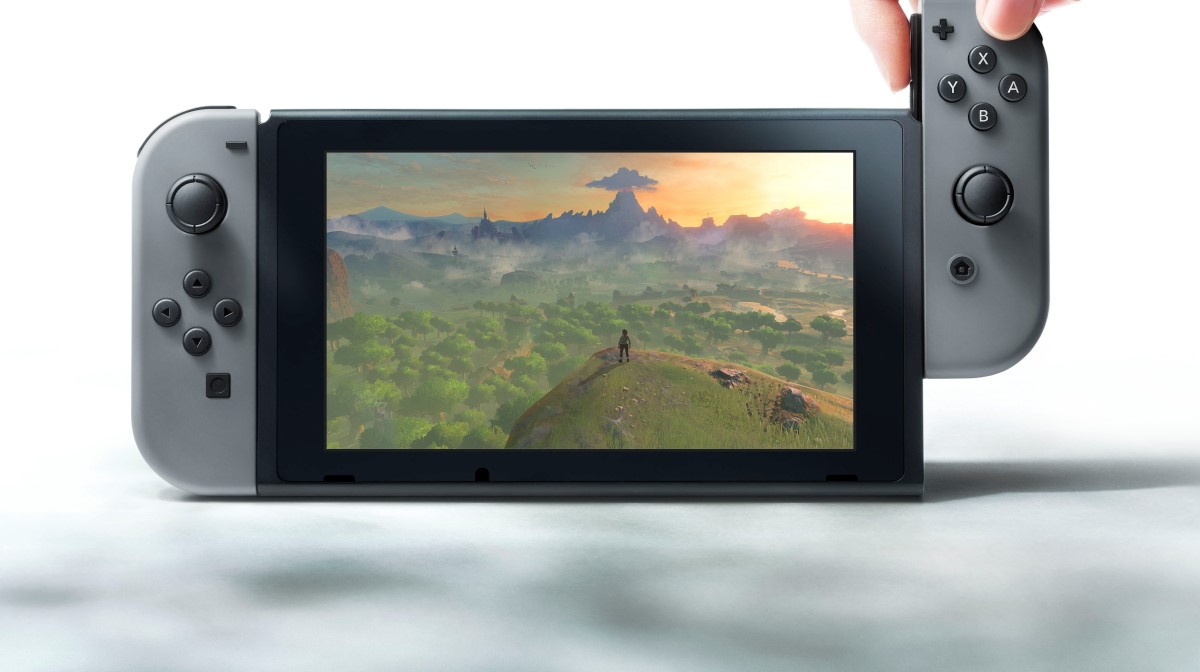 How Much Can You Buy The Nintendo Switch For?

During the launch event in January, Nintendo announced that the Switch will be priced at £279.99 & $299.99 in the US. This is competitively priced, especially since both the base versions of the PS4 and Xbox One are cheaper to the comparatively underpowered hybrid-console.

What’s comes with the Nintendo Switch?

The Nintendo Switch comes with the following:

To see an unboxing of the Nintendo Switch, check out Nintendo of Europe’s president Satoru Shibata unbox a Neon Nintendo Switch. We can see that the box itself has a premium feel, with the console unit and Joy-Con controllers taking stage front and center. We’ve rounded up our favorite Nintendo Switch Accessories here!  The Switch does not come with a pack-in title a-la Wii Sports. However, 1-2 Switch is a game that utilises all of the unique functionality of the Nintendo Switch and is a great showcase full of minigames you can play with a friend.

What Can I Play On The Switch?

More titles are slated for this year, including Super Mario Odyssey, Xenoblade Chronicles 2, Splatoon 2, Mario Kart 8 Deluxe and even more. Prolific developers are all looking at the Nintendo Switch for development now, Nintendo released this image to showcase the third-parties that are onboard.

How Powerful Is The Nintendo Switch?

The good folks at Digital Foundry have confirmed the Nintendo Switch’s tech specs with their source, so we’ve summarised it all below. The power of the Nintendo Switch has been a hotly debated subject in the run-up to its reveal, with the console itself coming under fire for using mobile chipsets that are not quite as powerful as the PS4 and Xbox One, but commands a higher price. The source of the price comes from the chipset that the Nintendo Switch uses. Boasting a custom Nvidia Tegra chipset, Nintendo is able to utilise modern graphics hardware architecture and streamline that for their own portable needs.

The Switch’s potential to run high-powered games is great, with the hybrid console proving that it’s able to run high-powered ports of games such as Mario Kart 8 and showing off its technical prowess with a souped up version of The Legend of Zelda: Breath of the Wild.

Nintendo Switch Vs PS4 & Xbox One

VentureBeat reports that the Teraflop (Graphics performance standard) performance of the Nintendo Switch is approximately 1 Teraflop. For comparison’s sake, the original PS4 clocks in at 1.8 Teraflops, with the Xbox One clocking at 1.31 Teraflops. This performance might be lower than both Microsoft and Sony’s home console offerings. The gambit that Nintendo is pulling here though is the Switch’s versatility as a handheld. It comes within spitting distance of the original versions of the current-generation consoles in terms of power.

Where the Switch may falter however is the current lineup of titles for the system. With only a handful of games coming out at launch, the Switch might not have the software library to go head-to-head against the PS4 and Xbox One just yet. To see what the critics are saying about the Nintendo Switch, check out our conversation with some leading experts.

Will you be getting a #NintendoSwitch?