Let’s face it, when everyone puts aside their differences there’s one thing that we can all agree on; dinosaurs are cool. Fact. When Jurassic World came roaring back on to our screens in 2015 the inner child in us did a little squeal of excitement while the outer adult immediately ran to the nearest cinema to watch it at least 5 times. With each new film we get a brand new set of dinosaur goodness, but which of the dinos we’ve met so far have been the most formidable of foes created by the InGen corporation?

Back in 1993 when Jurassic Park first graced our screens there were few movie monsters as formidable and huge as the T-rex. Cited as being the main attraction from the flagship park on Isla Nublar, Rexy was given pride of place in the centre of the park, guarded by a high voltage electric fence and monitored closely by HQ. However, as we all know, things didn’t exactly go to plan for Doctor John Hammond’s original park. The T-rex was able to easily break down the perimeter fence, flip over the 4×4 tour vehicles and run fast enough to keep up with another vehicle (as well as snacking on a few other visitors, goats and gallimimuses along the way). Weighing in at over 6 tonnes and standing at a height of 12 meters, you wouldn’t want to get on the wrong side of this wrecking ball with legs unless you fancied having the toilet cubicle (and building) plucked up from around you. Despite their fearsome stature, the T-rex isn’t the most fearsome of the dinosaurs. Vision based movement means it’s not impossible to use cunning and wit to evade Rexy and, as proven across multiple films, if it wasn’t for the infamous T-Rex the day wouldn’t have been saved on countless occasions. They’re big softies at heart!

New for Jurassic World, the mosasaurus is the aquatic creature from the deep that even gives Jaws a run (or swim) for its money. At 18 metres long the mosasaurus lurks in the depths feeding on mostly sea birds, large fish and, of course, sharks. As the Jurassic World equivalent of the Shamu Show at SeaWorld, the mosasaurus is able to propel itself out of the water into the air and catch its prey while onlookers gawk and gasp from the safety of ‘the splash zone’. Despite being as formidable a dino as the t-rex, the mosasaurus is largely not a threat if you’re not in the water (or within close enough range to get pulled in but we’ll get to that later). With plenty of other dinosaurs still yet to cover as well as any new additions in Jurassic World: Fallen Kingdom, we can’t help but hark back to Qui-Gon Jin’s (crossing franchises, we know) famous quote; “there’s always a bigger fish”. 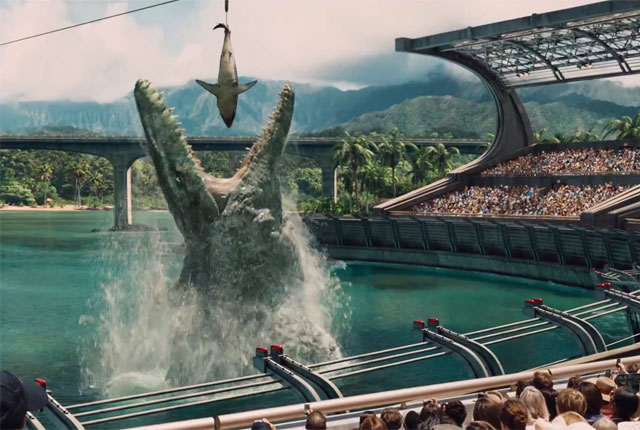 As far as dinosaurs go in the InGen Corp’s roster, this guy is just straight up mean. First introduced in Jurassic Park III, the spinosaurus was the seemingly impossible dinosaur that made the t-rex look like an awkward chicken with a head too big for its body. When the spinosaurus first burst on to the silver screen it seemed like the biggest movie monster anyone had ever seen. With a long snout packed with razor sharp teeth and arms with claws that actually worked as functional weapons (sorry rexy), the spinosaurus was able to easily make a meal out of unsuspecting visitors to Isla Sorna and turn an aeroplane into scrap metal in a matter of minutes. Sounds pretty terrifying right? How about when we add in the fact that this thing is just as vicious in water as on land? Yeah, now that’s scary. Similar to a modern day crocodile, the spinosaurus was able to hunt as effectively in water as on land making this a big mean old nasty that would munch anyone in one bite. If we were just looking at the original Jurassic Park trilogy this guy would easily take the crown as the biggest and baddest of Dr Hammond’s dinosaur creations. But then this guy came along… 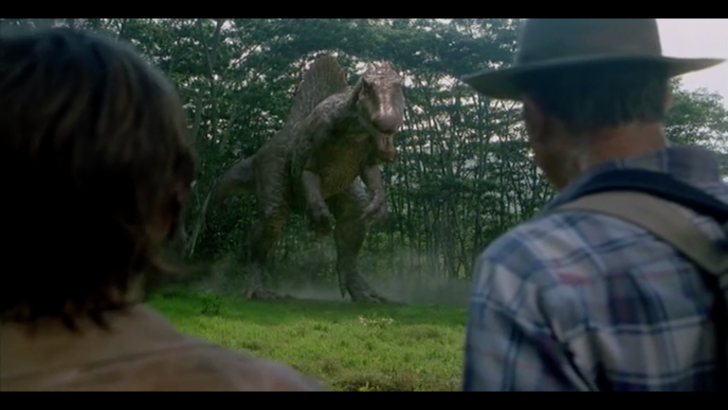 If you’re looking to make a dinosaur (PS, this is a very bad idea) that’s going to terrify literally anyone the best thing to do is mash up 7 different dinosaur DNAs, along with a few other critters, and you’ll have something that nightmares couldn’t even fathom. Introducing the Indominus Rex. Pitched to investors as the newest attraction guaranteed to terrify anyone, the indominus rex could reach up to 40 feet high and 50 feet long. In comparison to the other dinosaurs mentioned so far this thing is massive. Due to the genetic jigsaw that InGen did when creating the indominus rex this gave it a number of killing features that turned it into the apex predator of the new park. With razor sharp claws and teeth, hyper intelligence and the ability to camouflage within its surroundings, this thing was suited to killing and doing so just for the sheer fun of it. Despite laying waste to pretty much all of the new Jurassic World park, we still don’t think this guy deserves the number one spot…

We know what you might be thinking. The velociraptor isn’t exactly the biggest or baddest or ugliest of any of the dinosaurs that we’ve mentioned so far. But when you have 5 velociraptors surrounding you we’re pretty sure that’s going to be a very, very bad day. As formidable pack hunters, velociraptors are able to co-ordinate their attacks with needle point precision taking on prey 5 times their size. Throughout all of the island theme parks, the velociraptors are notorious for being cold calculated killers. These things are also terrifyingly quick and agile making them near impossible to avoid. The intelligence of these super-charged chickens means that they can logically solve problems (such as opening doors) and communicate within the pack to successfully take down their prey. As Dr Alan Grant says, it’s not going to be the one staring right at you that’ll kill you, it’s the two from the side you didn’t even know were there. We’ve given these guys our number one spot for now but we’ll just have to see if they can hold that title when Jurassic World: Fallen Kingdom comes out!

Jurassic World: The Fallen Kingdom is out on the 22nd of June 2018!