Whenever a film claims to be based on a true story, there’s always an amount of scepticism around how closely events depicted reflect the truth.

With Bad Education, the second film from Thoroughbreds director Cory Finley, the tale of a high school administration committing embezzlement of the school’s budget actually took place in Roslyn, New York, the hometown of the film’s writer Mike Makowsky. He was a middle school student in the same town when the story broke. Not quite a first-hand witness, but uncannily placed to be able to give this story an accurate account.

The players at the centre of Bad Education and Roslyn’s administration are the high school’s business administrator Pam Gluckin (Allison Janney), and most prominently, the district superintendent Frank Tassone; a role here played by Hugh Jackman in perhaps the best performance of his career to date.

Jackman, an actor whose performances are typically more showy than subtle, immerses himself in the captivating character of Tassone, nailing the balance between the facade of humility and righteousness displayed for the public eye, and the corruption and entitlement which lies beneath.

Not once does he let the mask of the respectable administrator slip in the correct company, but as events transpire to implicate Tassone in an embezzlement case where the figures keep rising, Jackman absolutely sells the desperation of a man who has worked himself into a position of privilege, unwilling to let go of his ill-gotten livelihood. 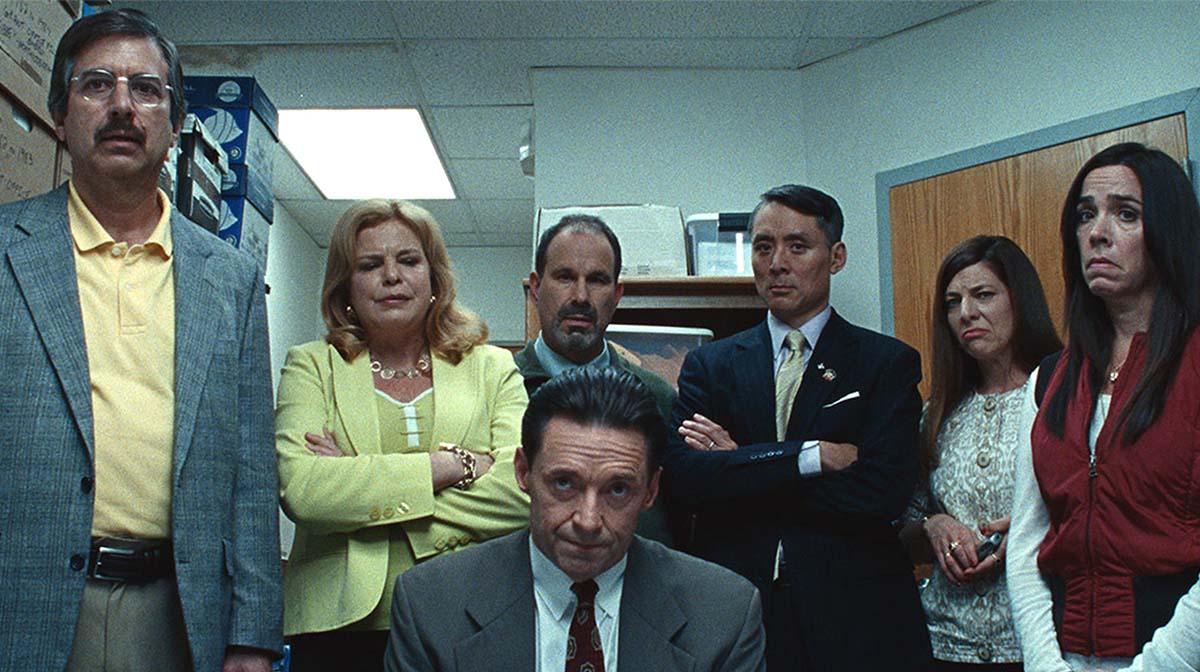 There is a sense that Tassone and Gluckin see their actions as an entitlement bestowed upon them due to their position, and Markowsky’s script, whilst unafraid to depict the culprits’ most egregious acts of larceny, never portrays either person as wholly villainous.

Tassone at least is considered to be responsible for the successes of the town’s high school, and by extension the town’s prosperity. He never seems to be insincere about his admiration for the school’s students either; at one point, when the world he has created for himself begins to fall apart, he still demonstrates patience and encouragement for an underachieving child.

Beyond such a phenomenal central performance though, Bad Education falls short as anything more than a solid small-town crime drama. Finley is more than happy to let Jackman’s performance drive the film, and whenever the story moves away from his character’s wrongdoings, the whole endeavour grinds to a halt.

The film’s total run-time comes to 103 minutes, but it feels at least twice that. What’s more, the lack of any clear consequences for these characters embezzling millions of dollars – aside from the prison sentences handed down – feels like a failure to make any salient point.

When it was announced that HBO had thrown a lot of money to acquire the rights to Bad Education after the Toronto International Film Festival, there was a feeling that it was a shame it will miss the major film awards race. But as it turns out, Jackman’s stellar performance notwithstanding, this film’s ultimate destiny as a TV movie feels strangely apt.

Bad Education does not currently have a UK release date.