With some incredible films nominated for Best Picture at the Oscars, why should Bong Joon-ho’s Parasite be recognised?

Here’s the short answer: it’s a gripping, multi-layered commentary on the conflict between the working class and the wealthier members of society, all while being wrapped up in an unbelievably tense thriller.

The first hour of Parasite is a crucial slow burn as we’re introduced to the Kims, a working class family who are only a few missed bills away from becoming poverty-stricken.

They work hard to get by, but neither are they afraid to cut corners. So when an opportunity arises to work for the wealthy Park family, they soon take advantage of the situation, replacing the other workers in the house so that the family can earn more.

There’s a cavernous divide between the two families, not only in their class, but in their attitudes to one another.

The Parks barely give a second thought to the Kim family, seeing them as servants rather than human beings – whereas the Kims are soon blinded by their own greed.

They’re only out to earn more money, and they won’t let anything (or anyone) get in the way. Although the audience instantly feels sympathy for the Kims, the film doesn’t excuse their actions – just because they’re poorer than the Parks, doesn’t justify their gluttony.

In particular, the portrayal of the housekeeper by Gook Moon-gwang as she goes up against the family is incredibly affecting once her desperation hits a fever pitch. And suddenly, this tale of opposing classes has quickly become a warning about greed. 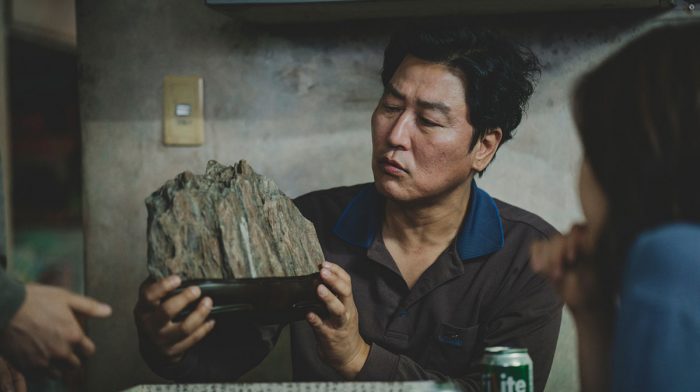 The perfect testament to Parasite’s power is the urge not to ruin the complete left-turn that it so maniacally forces on the audience.

Because while the Kims are undeniably looked down upon by the Park family, it can always get worse. And when that moment startles the audience (and more importantly, the Kims), it shines a light on both the underbelly of the rich, and those feeding off the scraps.

This unpredictable element offers even more subtext to the messages Joon-ho looks at throughout the film in a brutal way. From there on out, it’s hard not to feel anxiously gripped throughout each scene.

While Parasite is undoubtedly a dark thriller (with some brilliant touches of comedy along the way), after the midpoint of the film it warps into a grungy, paranoid exploration of desperation.

The house itself slowly evolves into a hostile environment, and the Kim family are constantly reminded that the lavish home isn’t something they’ll ever achieve, as the matriarch of the Park family incessantly talks about the esteemed architect that built the mansion.

One standout scene sees the Kim family maneuvering themselves around the house, attempting to cover up all manner of messes as the Parks suddenly return home. 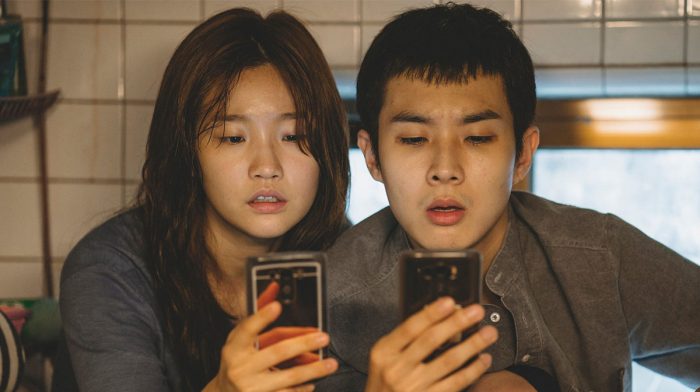 And while it sounds like the description of a hapless family comedy, it is anything but. Joon-ho pulls the scene tighter and tighter until both parties are mere feet away from each other.

It’s expertly done, and it’s one that becomes a ticking time bomb, waiting for the right moment to unleash a wave of fury on the characters and the audience.

But it’s not all metaphorical messages and suspense filled rooms, there’s an excellent sprinkling of black comedy scattered throughout Parasite that transforms even the simplest of actions into a darkly humorous moment.

Watching Song Kang-ho smiling for a selfie while someone worries about their throat closing up? Devilishly brilliant. 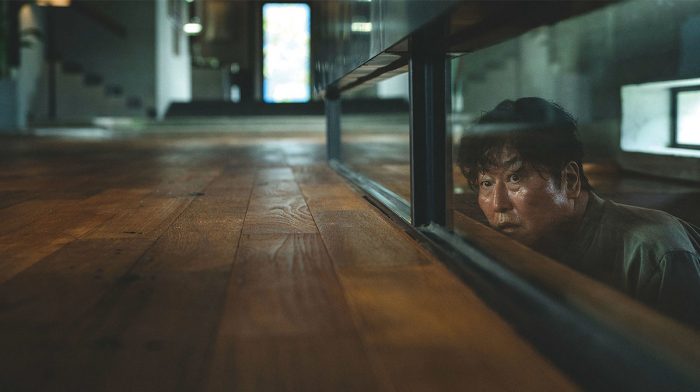 But it’s in one of the final scenes between Kim Ki-taek (Kang-ho) and Park Dong-ik (Lee Sun-kyun) that it becomes clear how fed up the two families are of each other.

Kang-ho’s flawless performance throughout the film leads up to this moment. It’s easy to spot how downtrodden he quickly becomes as comments from the Park family chip away at his self-esteem and his pride. Once it’s clear how it’s affected him, the anticipation of seeing his reaction instantly ramps up.

Soon the coiled up anger that he’s suppressed for too long leaps out, finally cascading into an outburst of rage.

Thankfully, the violence scattered across the last hour never feels gratuitous, but it’s certainly shocking. Whether it’s a dull thud or a surprising slash, it all feels perfectly in place like some kind of beautifully disturbed puzzle.

While director Joon-ho never feels the need to delve into pure lunacy with horror tinged moments, once he has the audience in his grasp, he never lets go.

So thanks to a delightfully twisted exploration of class opposition, some fascinating performances and a violent flair, Parasite more than deserves recognition by the Academy.