The camera cuts to two men, sitting across from each other at a table in an American diner, surrounded by the hubbub of the other restaurant guests and staff.

The cups of coffee are barely touched, no food is nibbled on, the pair of men are far too busy trying to understand each other a little better.

And they soon realise that despite the fact they live on opposite sides of the law, that’s actually where the differences between them end.

They are two sides of the same coin, sharing the same understanding, and have a level of respect for one another too. 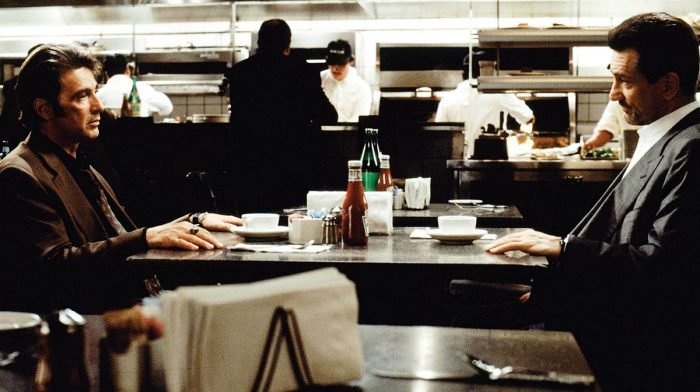 It is a remarkable scene, and perhaps what Michael Mann’s superb film Heat is still most famous for 25 years on from its initial release.

Undoubtedly one of the best crime-thrillers ever made, this diner scene which comes in halfway through is not only one of the highlights of the film, but one of the most iconic moments in cinema history, and deservedly so.

It is a masterclass in dialogue, storytelling, character building, cinematography, directing and acting – a rare moment in film which is, and I truly mean this, perfect. 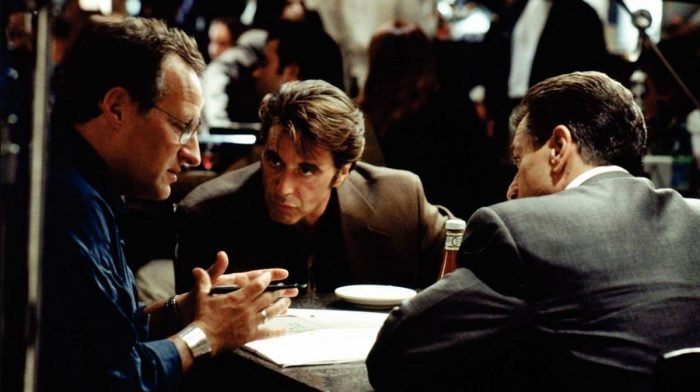 The scene sees Al Pacino’s detective Vincent Hanna finally come face-to-face with Robert De Niro’s criminal Neil McCauley, with the duo having spent most of the movie to this point trying to suss each other out from afar.

This calm confrontation then is a chance for the characters to not only learn about each other, but for the film to explore their similarities, and establish a bond of respect between the two.

And as they get to know each other and how their minds work, we as an audience also understand their characters better too, allowing us to connect and engage with them more. 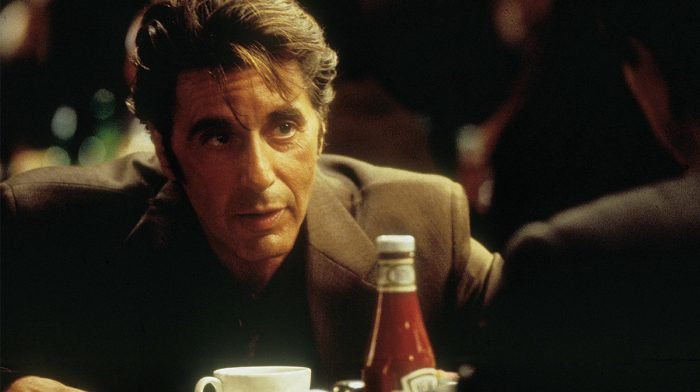 The men are honest and open about their lives, their relationships, their most private thoughts and most crucially, their commitment to their work, which means they won’t let anyone stand in their way.

As Hanna tells McCauley: “I won’t like it but, if it’s between you and some poor bastard whose wife you’re going to make into a widow, brother, you are gonna go down.”

McCauley calmly responds: “What if you got me boxed in and I gotta put you down? ‘Cause no matter what, you will not get in my way. But now that we been face to face, I would not feel good about that. But I won’t hesitate. Not for one second.” 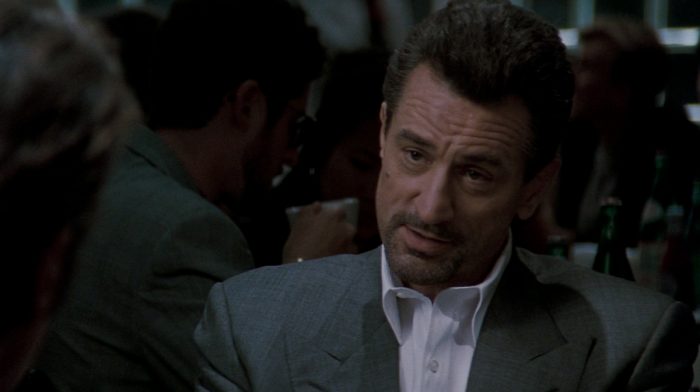 This moment is pivotal as we now know next time the pair meet, it will lead to the death of at least one of them.

From then on the tension is absolutely nail-biting, as if it wasn’t putting me on the edge of my seat enough during the first half of the movie.

Whilst the dialogue and direction is incredible, you did need two acting juggernauts to really make this something special, and oh boy do Pacino and De Niro deliver in style.

You can really feel the heat between them as they sit there at that diner table, playing a mental chess match, trying to figure out how to capture each other’s king. 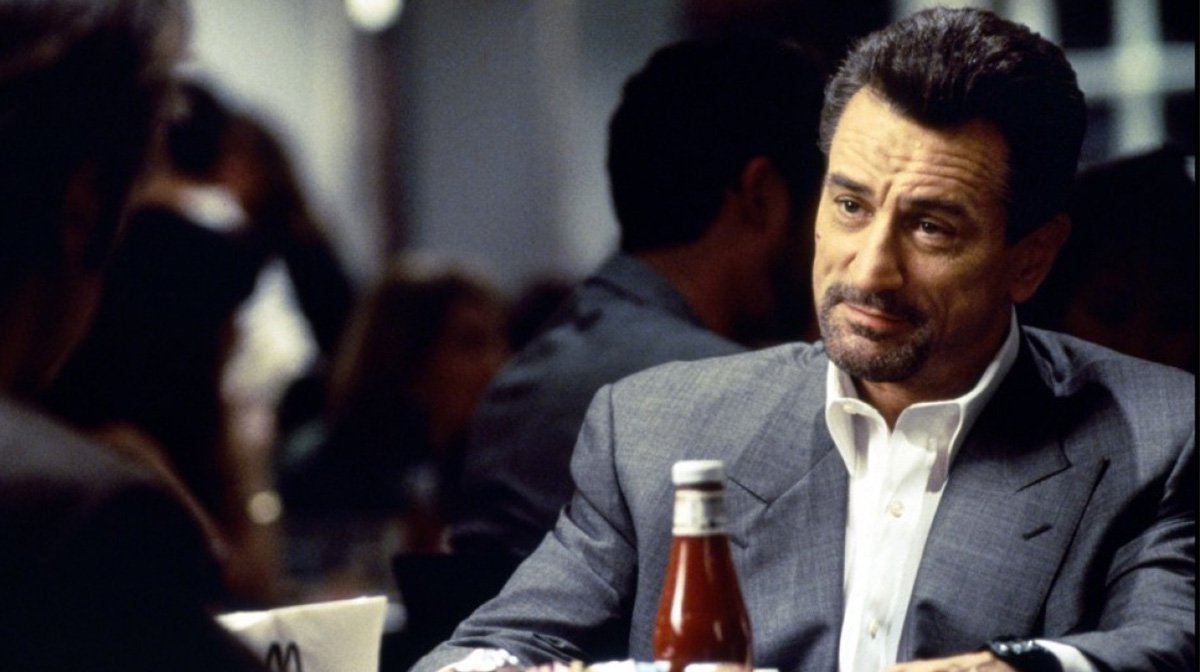 It really was Mann’s checkmate moment when it came to solidifying Heat as a masterpiece, and it’s no wonder that scene has inspired many movies since.

In fact I came across Heat thanks to my love for The Dark Knight, which is the film which got me into cinema. My dad showed me Heat telling me I would like it, and he was damn right.

Director Christopher Nolan drew inspiration from Mann’s film and thus it can be seen everywhere in his movie, with the diner scene directly influencing the great moment in The Dark Knight where Batman interrogates the Joker. 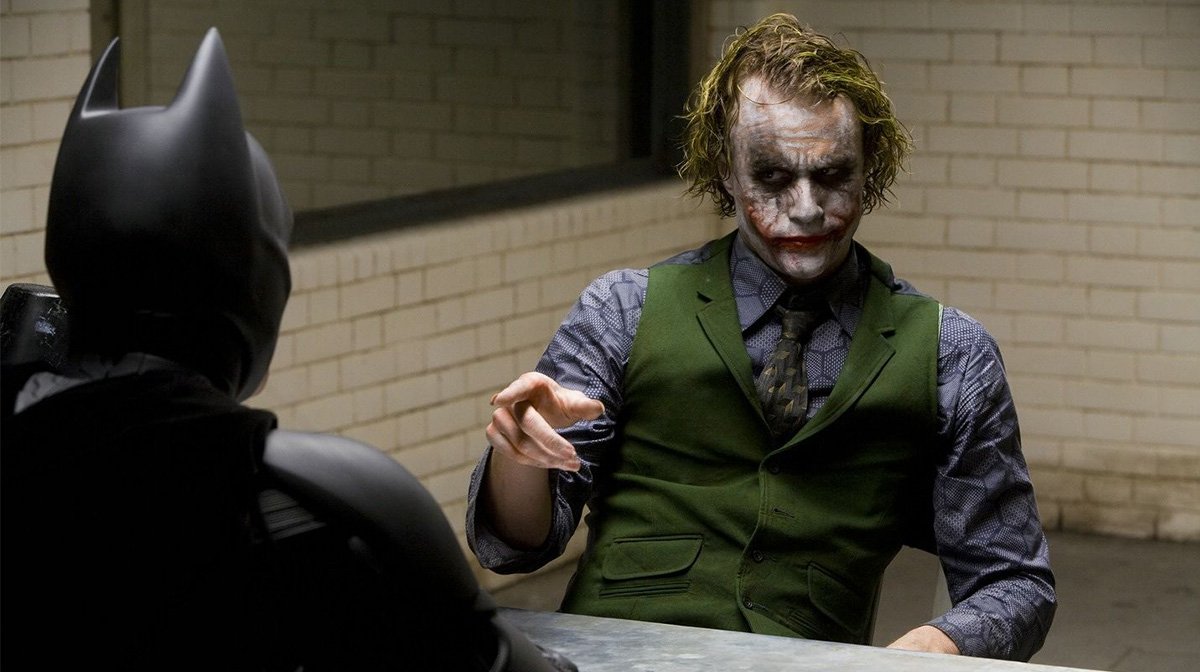 It’s no wonder then Nolan moderated a Q and A screening of the 4K remaster of Heat in 2016, with the interview with Mann and the cast being rather eye-opening.

That’s because Pacino and De Niro revealed they didn’t rehearse the scene before shooting it, which just makes it even more extraordinary.

The idea not to rehearse originally came from De Niro, but everyone was in agreement as they wanted it to be as organic as possible.

Mann added that they talked it through together and analysed the scene, but on the night Pacino and De Niro met, sat down at the table and the cameras just started rolling.

Another fascinating thing about this scene is that it is inspired by a real life moment, with Heat in general drawing from a true story.

Mann’s film is informed by the experiences of former detective Chuck Adamson, with Pacino’s character Hanna being modelled on Adamson himself, who did pursue the real-life McCauley (played by De Niro).

The career criminal had been on Adamson’s radar for a while, but in 1964 that’s when the tense cat-and-mouse chase really began, with many moments from it being portrayed in Heat.

Adamson really did kill McCauley in a shootout, the warehouse sting was aborted due to a careless police officer making a noise, and the armoured truck robbery was a real heist. 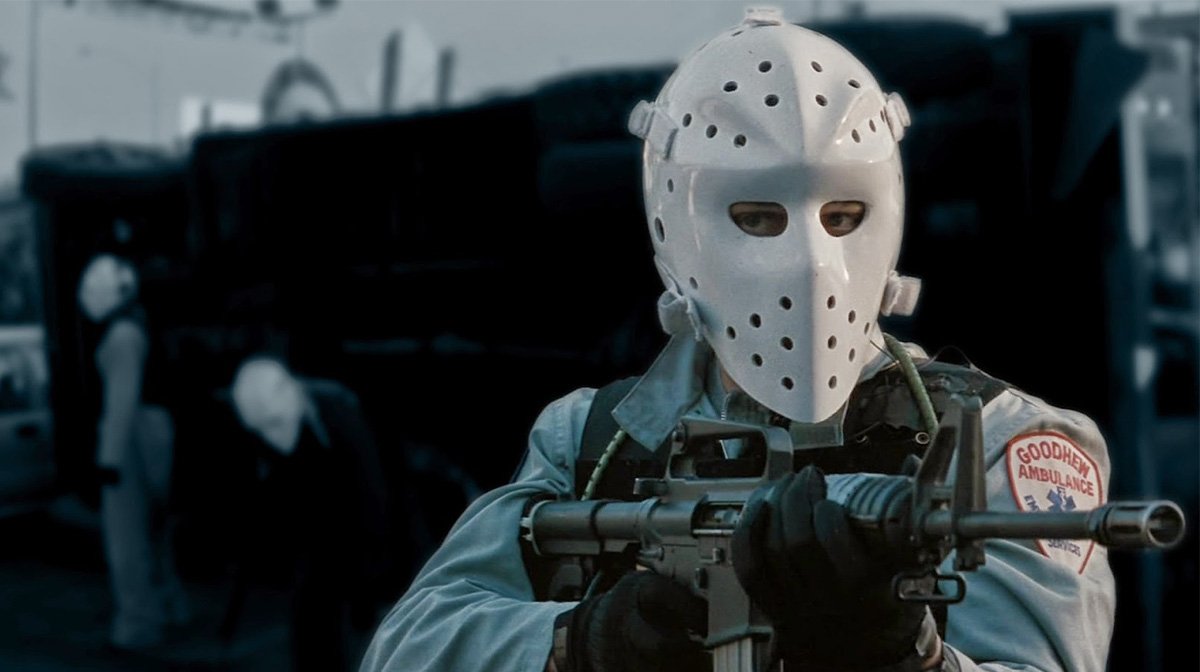 And of course, the interaction in the diner was based on a meeting between Adamson and McCauley after they bumped into each other by chance shortly after the latter’s release from prison.

They did have coffee together at a diner, they did open up about their lives, they did find a common ground, and the confrontation did conclude with the pair agreeing at their next encounter nothing will stop them in the way, no matter the cost.

That promise was of course delivered with Adamson putting six bullets into McCauley on 25th March 1964, only a few months after their coffee together. 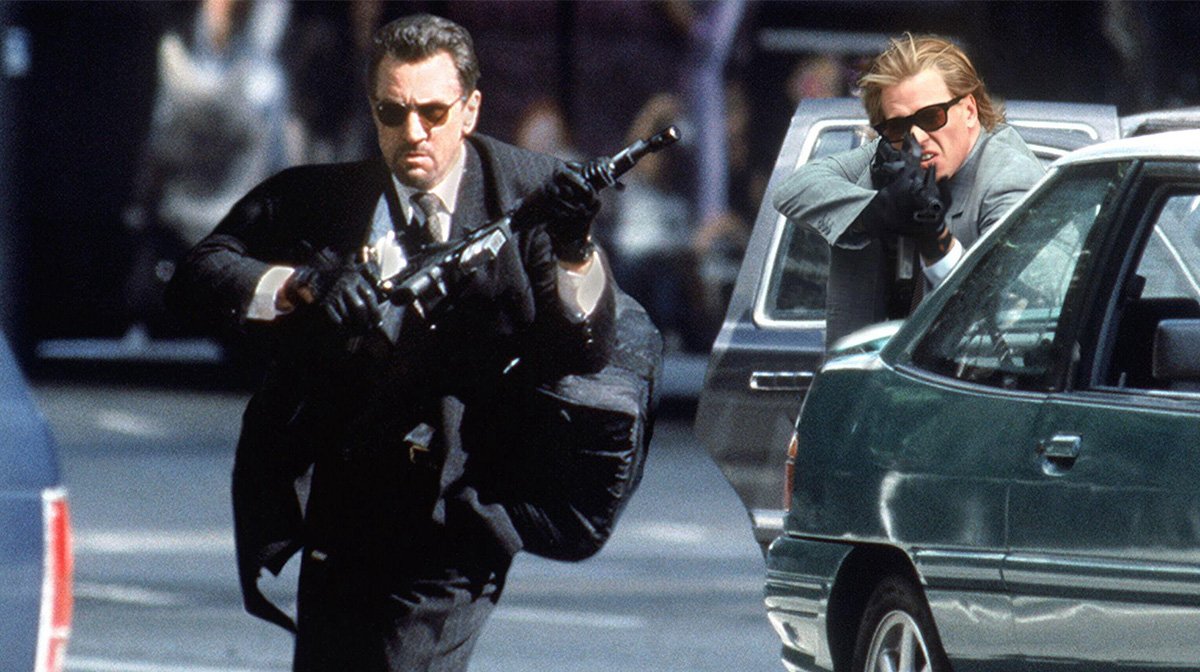 Mann reflected on the relationship between the real-life cop and robber in the book Michael Mann: Crime Auteur, describing why they opened up to each other.

He said: “Chuck was going through some crises in his life, and they wound up having one of those intimate conversations you sometimes have with strangers.

There was a real rapport between them; yet both men verbally recognised one would probably kill the other.” 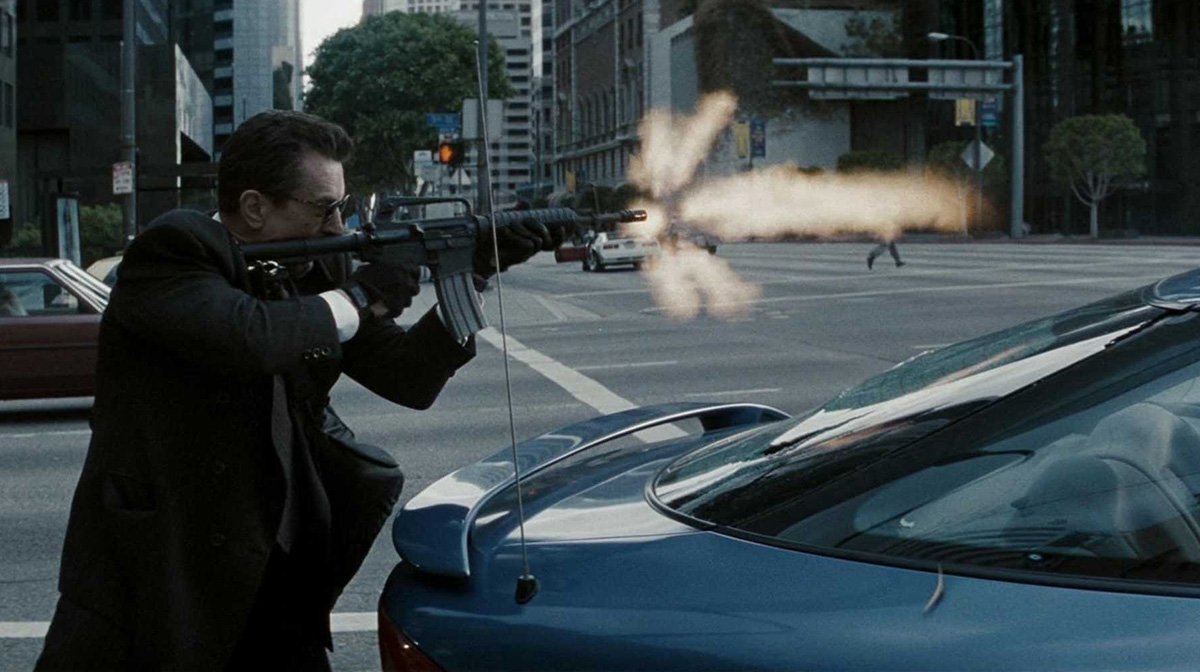 This duality and unlikely bond clearly fascinated the writer/director, and what he took from it would result in one of the best scenes in cinema.

Heat is clearly more than just one great scene, but this moment really was lightning in a bottle, a rare feat of pitch perfect acting and filmmaking.