Today is the 15th anniversary of Disney/Pixar’s The Incredibles, admittedly not the first venture by The Mouse House into the world of superheroes (remember The Rocketeer in 1991?), but certainly the most spectacular.

In 2004 nobody talked about cinematic universes, and superhero films weren’t the events they are now. Standalone Spider-Man or X-Men outings were as good as it got.

But The Incredibles, a.k.a. the Parr family, arrived just as the game was about to change, with Mr Incredible, Elastigirl, Dash and Violet – and some help from Frozone – battling Syndrome, and laying some of the groundwork for themes that we’ve become used to in more recent superhero offerings. Yet they’d never seen the inside of a comic book.

So what made it so great? Perhaps even the best superhero film?

All the right ingredients – and more 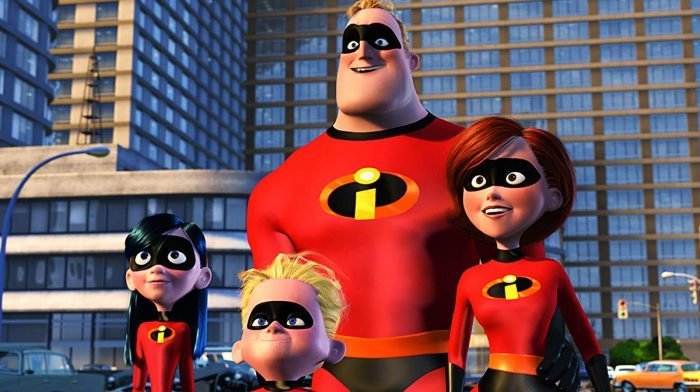 Put simply, The Incredibles has the lot. Exotic locations, great action sequences, plenty of laughs, interesting characters – they’re all there, coupled with what was the best in animation for its day.

It’s also an origin story, but only in passing – remarkable for a film that precedes the big hitters of the genre. We’re plonked
straight into Bob/Mr Incredible questioning his value in a world that doesn’t want him, or superheroes.

Because, on top of all it has to offer, The Incredibles is about people, the struggles that go with having a family and being parents, as well as being super. And, all the time, the main characters are having a blast. 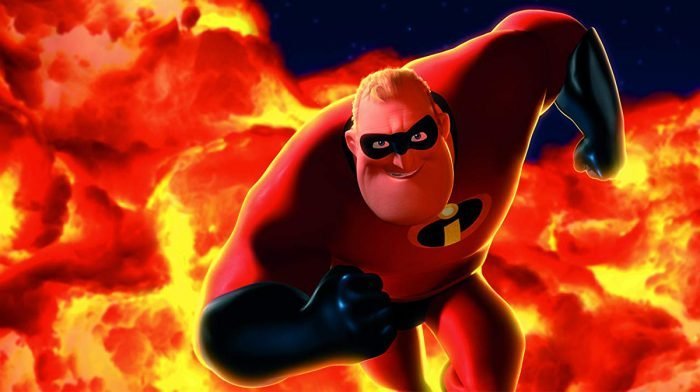 It’s a film full of affection, and poking fun is all part of it so, at times, it comes close to being a Deadpool for families.

All the favourite tropes of the genre have their moment of ridicule. Those costumes – in fact, the entire history of superhero films until then – are immortalised in the ‘no capes’ montage, delivered by the inimitable Edna Mode (voiced by no less than director/writer Brad Bird).

The infamous villain monologue gets its very own gag. And the ‘heroes don’t kill’ rule? There’s a test for that too. Nothing escapes – not even those super powers themselves. 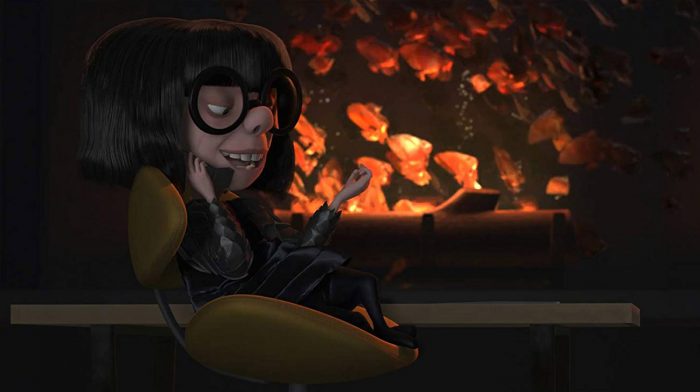 Sure, the Parrs feel like a real family who just so happen to have powers, but think about it.

Bob believes he has to be the backbone of the family and the world, so he’s Mr Incredible with his super strength. Over worked mother Helen is pulled in all directions, so she’s super-stretchy Elastigirl.

Violet is an awkward teenager, so she’s given invisibility. And hyperactive young Dash has super speed. Tailor-made stuff.

A foot in the real world 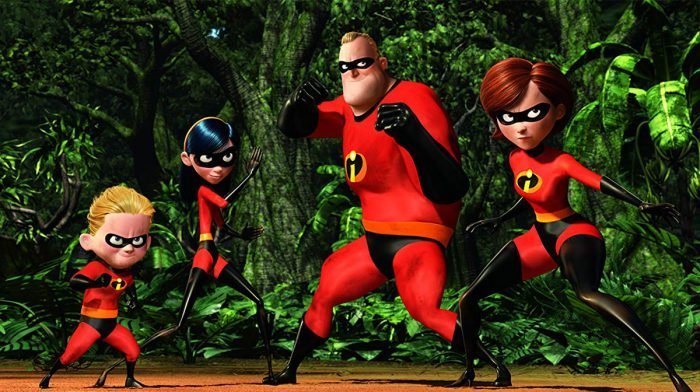 The likes of the Avengers may be heroic on an epic scale, but they never seem to bat an eyelid when it comes to mass destruction. The Incredibles, on the other hand, are ahead of their time, knowing that their actions have consequences and it’s there right from the start of the film.

The government has forced superheroes to retire when their powers reach new heights (sound familiar?) and public opinion turns against them. So the Parrs are stuck in a quasi-witness protection system, with all the frustration and boredom that goes with it.

But that sense of reality is reflected in the family themselves, with Violet and Dash feeling constrained, if not over-protected, by their parents, and wanting to give full rein to their powers. Yet Bob and Helen want them to take those powers seriously and won’t trust them to use them properly. Just like any family, really… 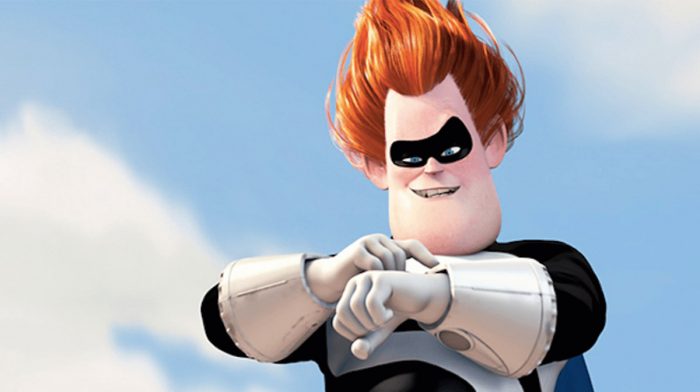 A formidable opponent is a must, right? And The Incredibles have one in the shape of Buddy, aka Syndrome, who comes complete with a sad backstory, one that points the finger at Mr Incredible himself.

Buddy is a huge fan of our hero and wanted to be his sidekick, but a dismissive ‘I work alone’ put paid to all that, shattering the boy’s idealism and pushing him down a darker road.

It makes for a powerful connection between the two, with Mr Incredible having to face his own personal failings and the consequences of his behaviour (we’re back there again).

At the same time, there’s a real complexity about their relationship, one that makes Syndrome more memorable than he might seem on the surface. 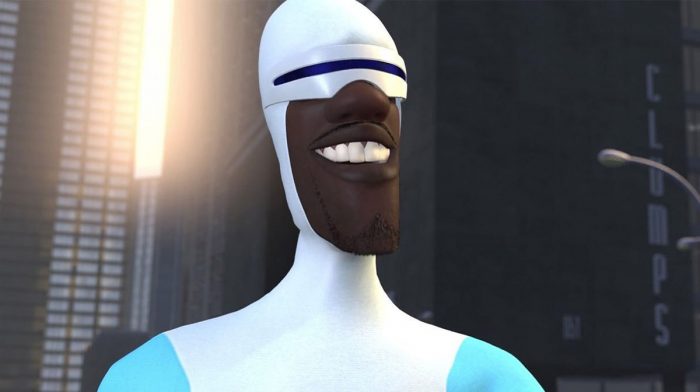 While this is the Parr family’s film, it just wouldn’t be the same without two scene-stealers.

First – she couldn’t be anything else – is everybody’s ‘dahling’ diminutive fashion designer, Edna Mode, who hates capes but dresses The Incredibles. That hair style immediately puts you in mind of Vogue’s Anna Wintour, but some say she’s based on multi-Oscar winning costume designer Edith Head.

No matter. Edna is joyously extreme, OTT in her demands and a total nightmare. And we love her for it.

Conversely, there’s the epitome of cool, Frozone, voiced by no less than Samuel L. Jackson. Another retired superhero, this long-term friend of the Parrs was best man at Bob and Helen’s wedding. His powers? He can turn anything to ice. Exactly what you expect from such a laid-back guy. 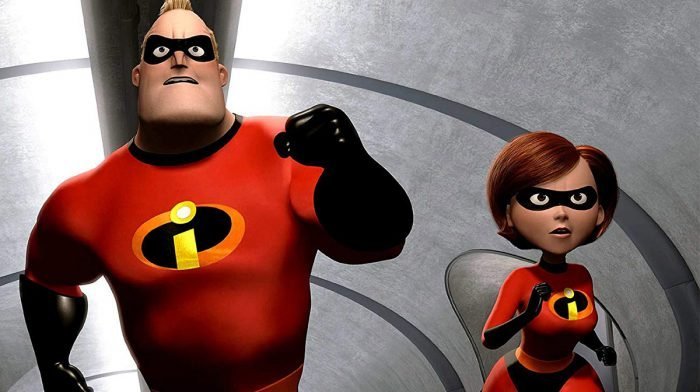 Put all that together, and you have a superhero movie that’s hard to beat. And one that still cuts it 15 years after its first release. Incredible!