When German filmmaker Christian Schwochow finished reading Robert Harris’ novel Munich: The Edge Of War, he knew he had to be the one to make it into a movie.

Schwochow was immediately struck by the story, which he feels is an important one to tell for today’s world, as he explained to us: “I read it and thought ‘wow’.

“It’s a story about Europe in 1938, but it felt like something urgent to our world and Europe right now, with Britain exiting the European Union, and the world not feeling so stable and safe anymore. 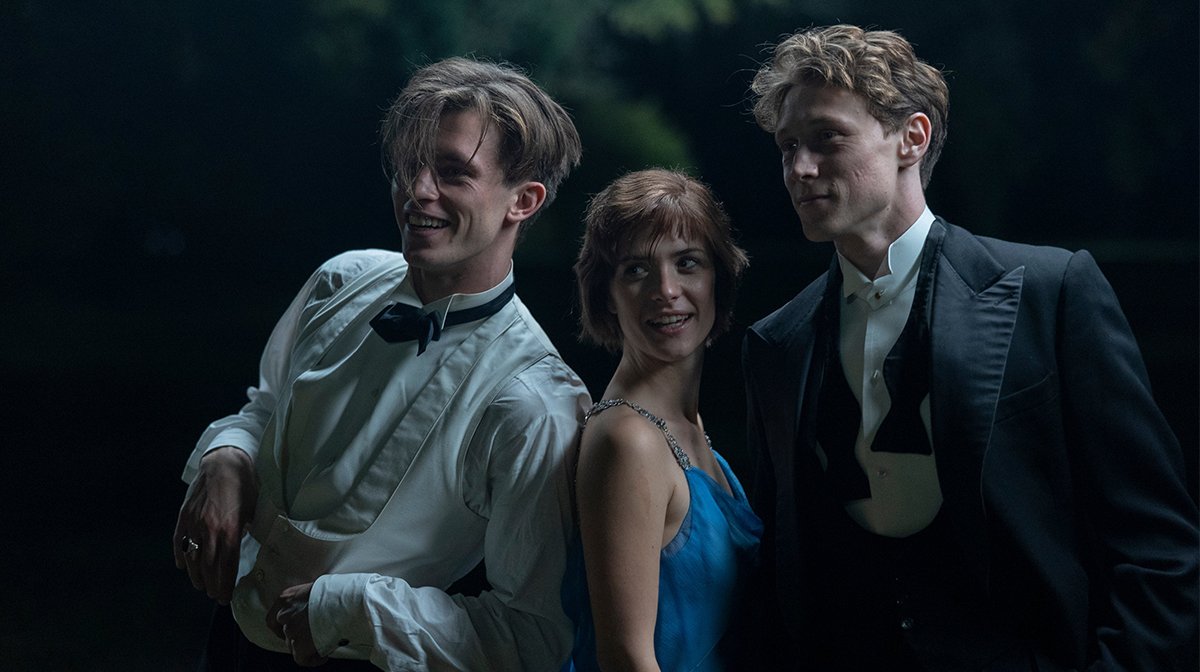 The story that had such an impact on Schwochow is one of politics, espionage and most significantly friendship, even in the face of conflicting ideologies.

Munich: The Edge Of War follows two young men, British civil servant Hugh Legat (George MacKay) and German diplomat Paul von Hartmann (Jannis Niewöhner), as they conspire to prevent a terrifying conflict that would lead to the deaths of millions.

Set during the autumn of 1938, the drama centres around the Munich Conference, one of the most crucial moments in 20th century history, where Germany, Britain, France and Italy came to an agreement – the annexation of the Czechoslovakian borderland areas known as the Sudetenland. It was a key step in the build-up to the Second World War. 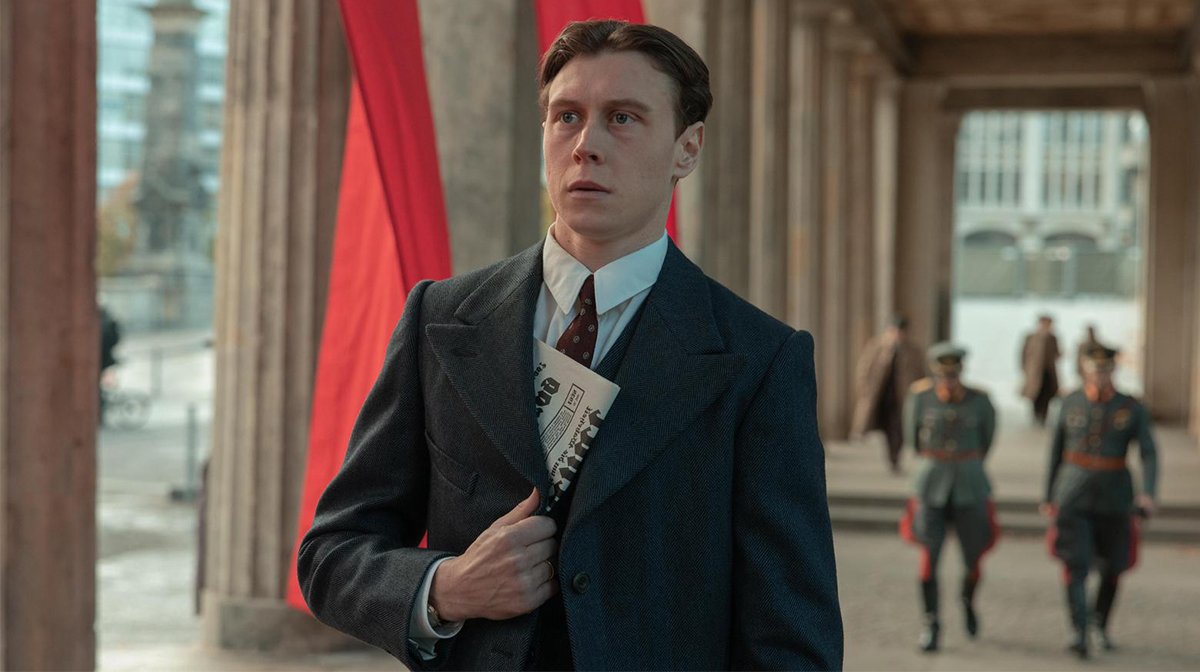 Schwochow admits he knew very little about this important moment in history before reading Harris’ novel, explaining that it wasn’t something he was taught about at school:

“My country is responsible for starting both World Wars, and although in history lessons we would learn about them, this particular moment was never really spoken about.”

The filmmaker therefore took a deep dive into the Munich Conference, learning as much as he could about these crucial months where the war might have been prevented.

As actor Niewöhner, who portrays Paul, tells us, Schwochow then ensured a website was built that allowed the cast and crew to read up on key figures and events from that time. 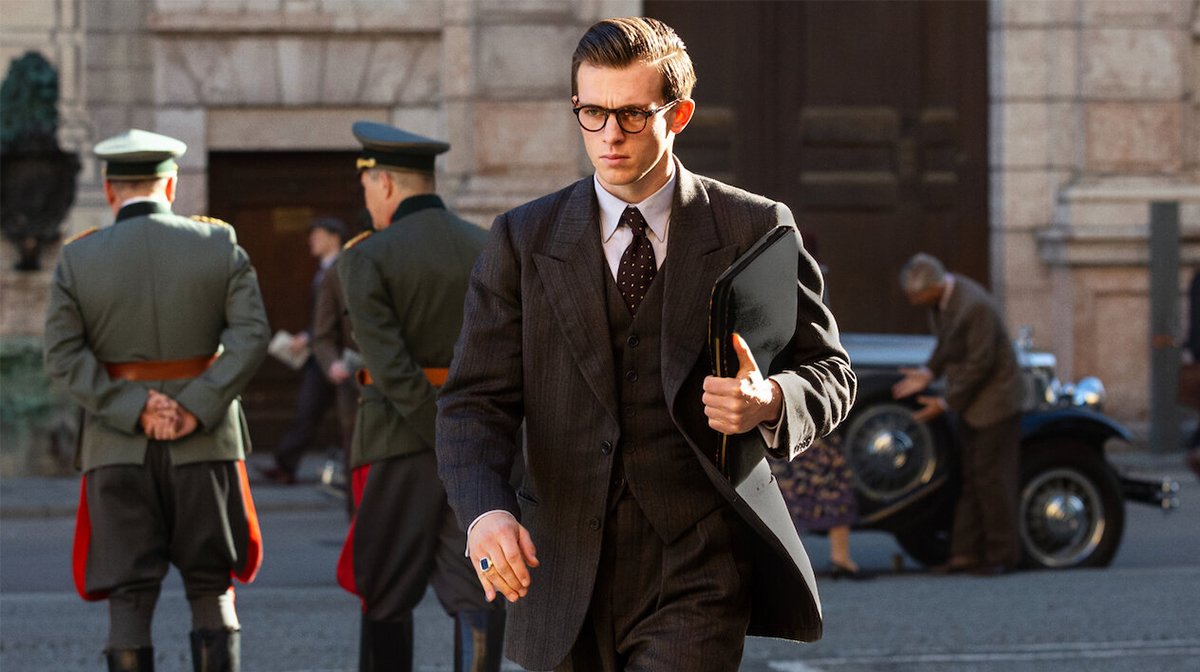 During his research, Schwochow became surprised by the attitudes political leaders at the time had towards Hitler: “The most striking fact was that a person like Neville Chamberlain, or the French Prime Minister, treated Hitler like he was an ordinary politician.

“They didn’t see him as a dictator, and therefore didn’t treat him as one. They tried to see and deal with him like he was normal, which is similar to what happens now.

“It’s so easy to judge from our perspective today, but the novel gave me an opportunity to glimpse at how it actually felt at the time.” 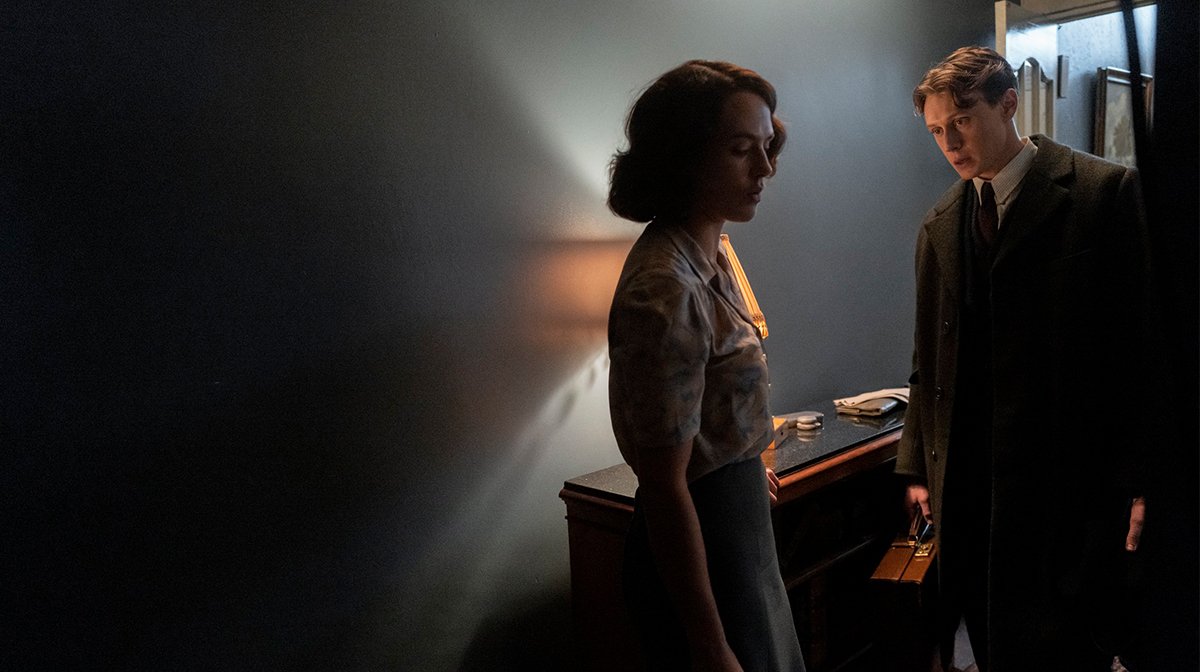 Schwochow was fully aware that these two figures would not only be difficult to characterise, but challenging to cast too given how important they are in history. Luckily legendary actor Jeremy Irons threw his hat into the ring early on for the role of Chamberlain.

Friends with author Harris, upon first reading the book Irons told the novelist he would love to play the part of the British leader, and therefore approached Schwochow once the director was onboard. 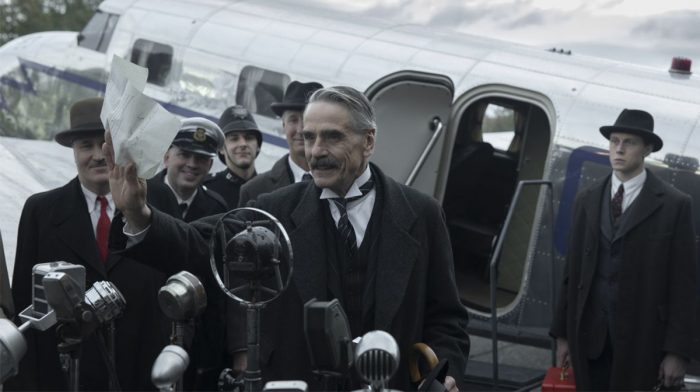 When it came to the character of Hitler, Schwochow decided he wanted to avoid cliches and approach the dictator as a “normal man”, not just as a beast.

He explained: “Looking at footage of the real Hitler, it’s kind of comical – he’s so funny, but you don’t want that. We also didn’t have many scenes in which he appears, so we had to try find a way to avoid only portraying him as a monster in a short amount of time.

“We hired Ulrich Matthes, a great German actor, and made the character a human being. It wasn’t the easy path, we treated him as a very normal man.” 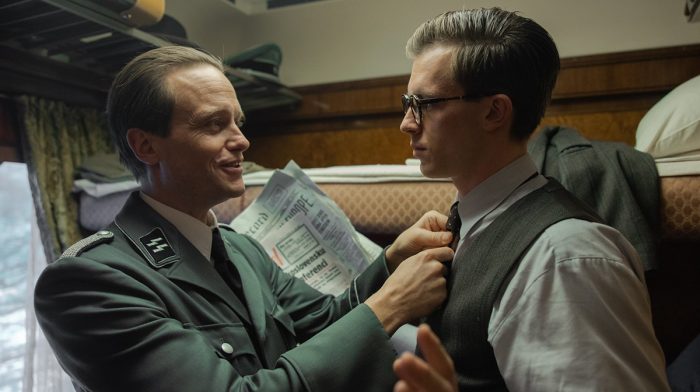 Niewöhner shares several scenes with Matthes, with his character Paul having private conversations with the dictator. The actor admits that these were “scary” to film:

“It’s a strange feeling. Hitler and Jesus are the most famous people on the planet. Everyone knows how he looks, how he speaks. Your picture of Hitler is so clear in your mind, but he was very different in a private situation, which is how we meet him in this film. It was really scary how real it was and how well Ulrich [Matthes] played him.

“But the best thing about Christian [the director] is that he leans you into what you are scared of and that’s always where creativity starts to begin.” 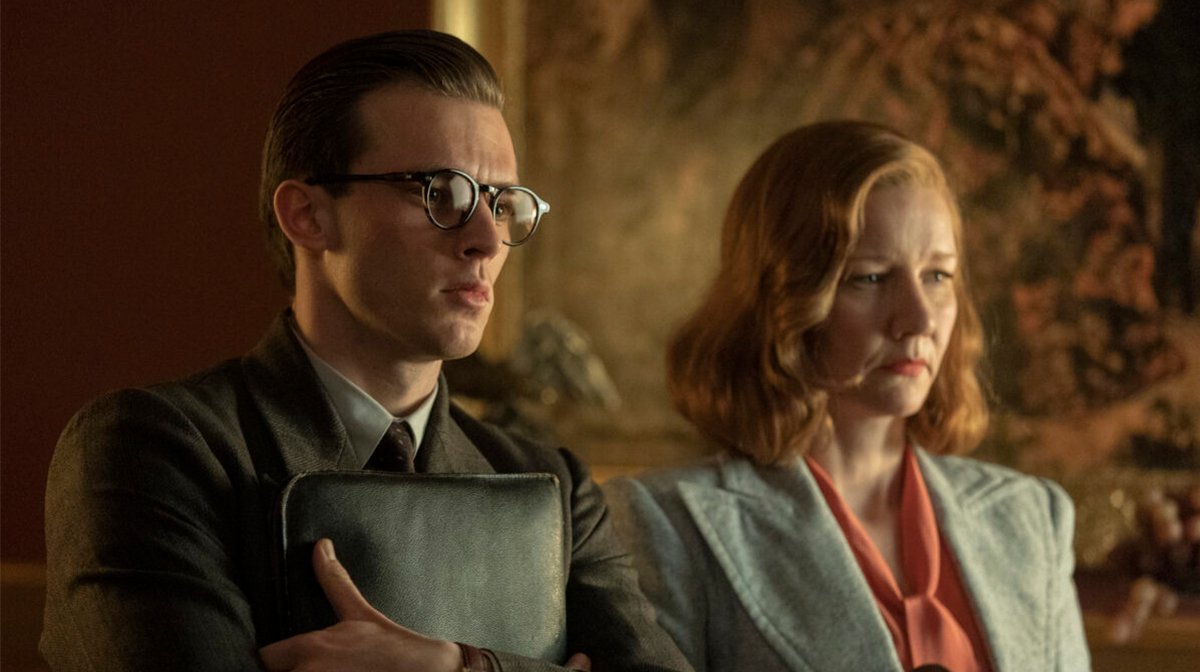 Whilst Hitler and Chamberlain are key figures in the film, the focus remains on the central duo of Hugh and Paul who are the audience’s way into the story. The passionate force of nature Paul neatly contrasts with the more modest Hugh, providing a dynamic that is fascinating from start to finish.

Having worked with Niewöhner on his previous film Je Suis Karl, casting Paul was smooth sailing for Schwochow. Securing MacKay for the role of Hugh was more complicated though, as the filmmaker explains:

“After 1917, George was in a league of actors which don’t do auditions – something we don’t have in Germany. We sent him the script and then had a Zoom call. I told him that it’s weird for me not to audition actors, and he said since 1917 it’s horrible as no one asks him to do so.

“He asked if he could record a tape and did just that. He was so committed and when on set with Jannis [Niewöhner], they just fell in love with each other.” 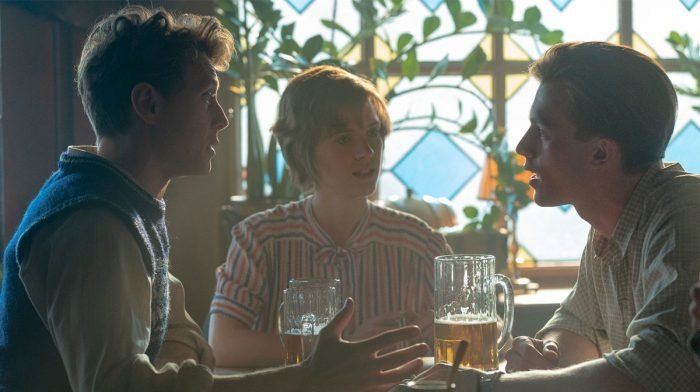 Niewöhner chuckles as we tell him Schwochow says him and MacKay “fell in love”, but he confesses that they did form a close bond, which helped the friendship between their characters evolve too:

We spent time together off set and got to know each other, and in the same time Hugh and Paul too.” That friendship comes across on the screen as Hugh and Paul’s complicated relationship feels very natural.

And whilst this story takes place in the past, the pair could have been plucked from today’s world, passionately arguing in pubs over a pint over which political leader offers the best future for young people. The resemblance to the heated debates had over topics such as Brexit is all too clear. 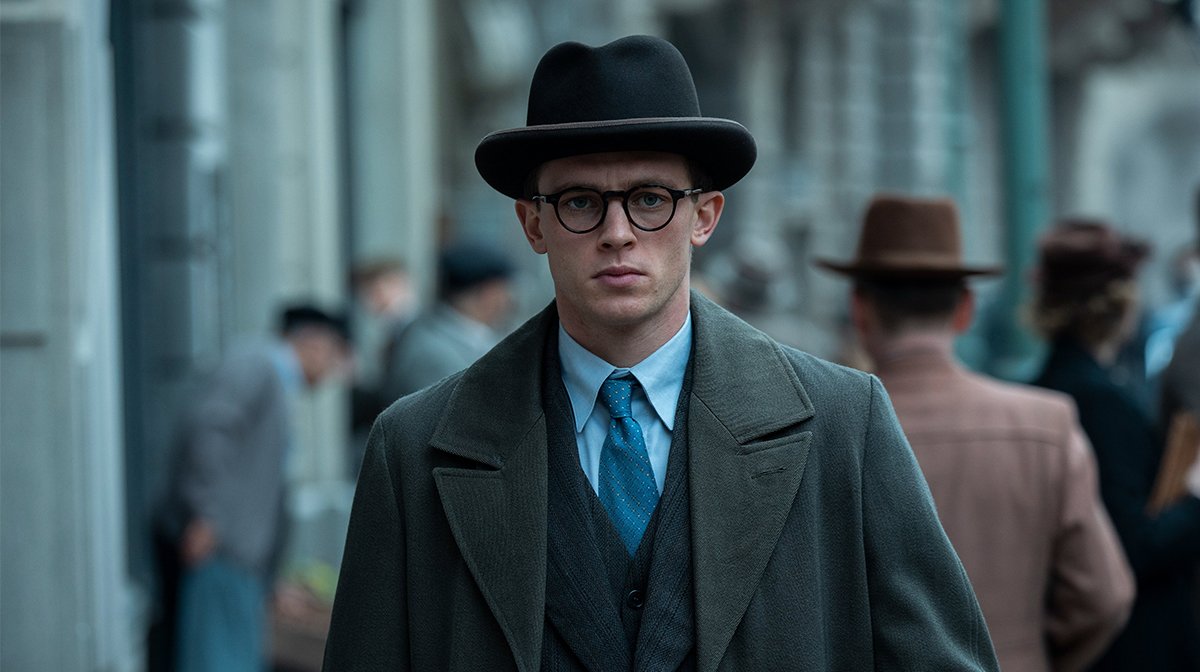 This is what Schwochow aimed to achieve with the movie, as he explains: “Both characters are definitely not heroes. They are just ordinary men, trying to find their positions and paths in a crazy world.

“I wanted to create two characters that felt very modern, able to discuss issues relevant to them, but also to have these discussions that resemble conversations we have today.”

Crucial to this is Paul. Whilst Hugh’s position is more or less consistent, we learn from a flashback scene that Paul used to support Hitler, and rather passionately too costing him friendships.

Niewöhner knew that this and Paul’s subsequent change of heart was key to unlocking the character, so strived to understand it: “I really tried to understand why he would believe in Hitler so much. I read about the time between the wars, his childhood, and what was happening that would affect him.” 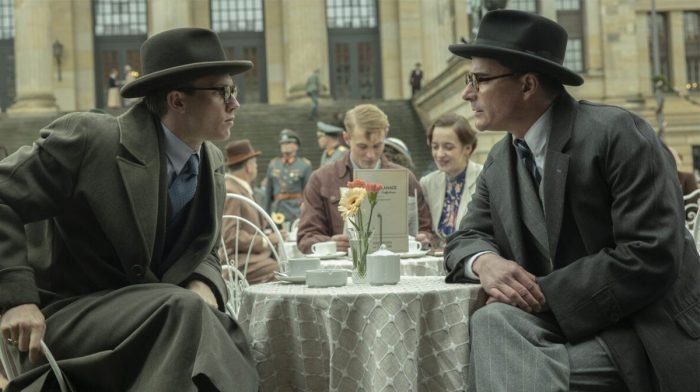 “There was a certain pride that was taken from many men after the First World War. And with the Treaty Of Versailles, Germans felt so weak. Then there was this guy telling the people we can get back that strength, what we deserve – that’s what he believed in.

“Paul didn’t listen to the stories of Jews fleeing, he just didn’t want to hear about that as he believed so much in that one message of making Germany great again.

“He then has to learn that was the wrong way, and now he’s fighting for the right cause but also fighting with himself, as he feels a major responsibility for what happened.”

For Niewöhner this is what he hopes audiences take away from the movie, that you can find your cause and fight for it. He concludes: “Even if you are one person or part of a small group, it’s always worth trying to fight for the right thing.

“If you get to the point where you feel you weren’t able to change something, you were still there and can try again, and again. The most important thing is to know what’s the right thing to fight for.”

Munich: The Edge Of War is in select cinemas now and will be on Netflix from 21st January.