There are few films that could make you scared of clouds, but Lorcan Finnegan’s Vivarium just about manages it.

Young couple Gemma (Imogen Poots) and Tom (Jesse Eisenberg) are taking the next step in their relationship and buying a house, with hopes of settling down. In their search they stumble across a rather odd‐looking estate agent named Martin (Johnathan Aris), who insists on taking them to Yonder – a new and upcoming neighbourhood.

Soon after their arrival in Yonder their eccentric estate agent disappears, and the couple become trapped in a neighbourhood with identical houses and no signs of escape. They are given one simple instruction: raise the child that is left on their doorstep and they will be set free. 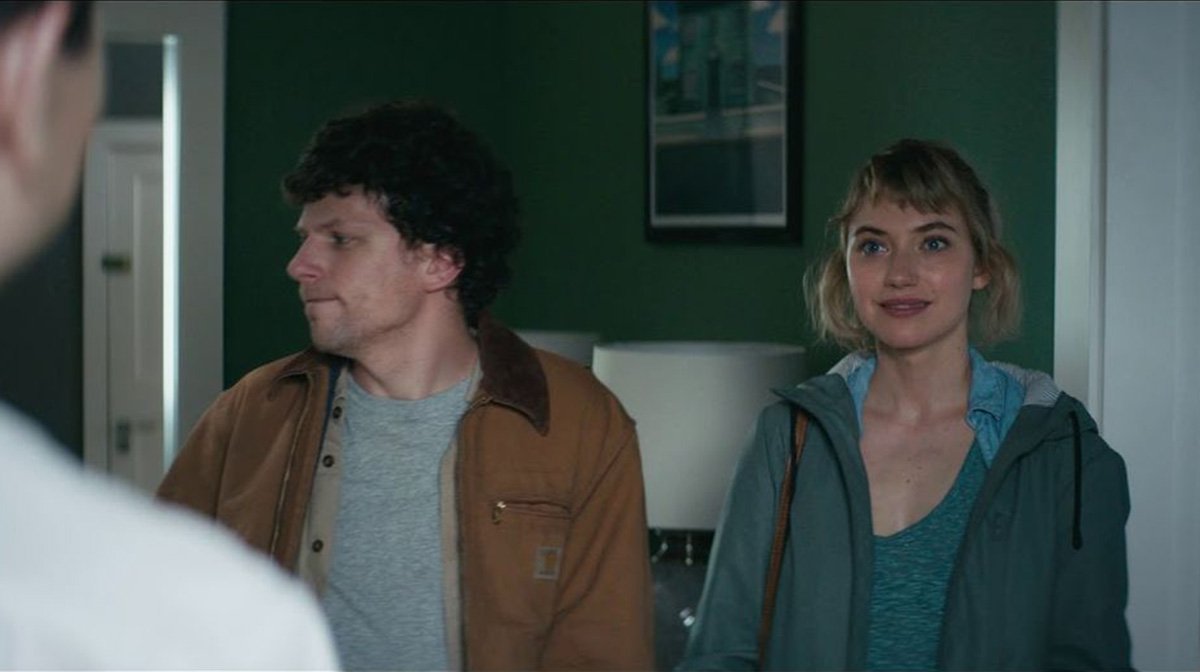 Vivarium is a strange suburban nightmare that aims to scare and thoroughly weird‐out its audience. Filled to the brim with pastel green houses, statically idyllic clouds, and felt‐like dirt, the world of Yonder is nothing short of bizarre and is not one for the light-hearted to get their heads around.

Finnegan wastes no time in his latest feature and gets straight to the juicy part of the story. Within what seems like mere minutes, we are trapped in Yonder with Tom and Gemma without the feeling of being rushed. We are treated to a small introduction to our dynamic duo and their daily lives before they are taken away from normality as they know it.

With only three characters to play with, Finnegan does a fantastic job of balancing the characters wants and needs to make them so defined over such a short period of time. He makes Tom and Gemma’s humanity seem especially vibrant against the mysterious ‘Boy’ (played by Senan Jennings and later Eanna Hardwicke), who only screams and barks for attention.

This contrast is key to the inner workings of Vivarium; we know Tom and Gemma’s main weaknesses, and we pray that these will not be the result of their inevitable downfall, but know they ultimately might be. 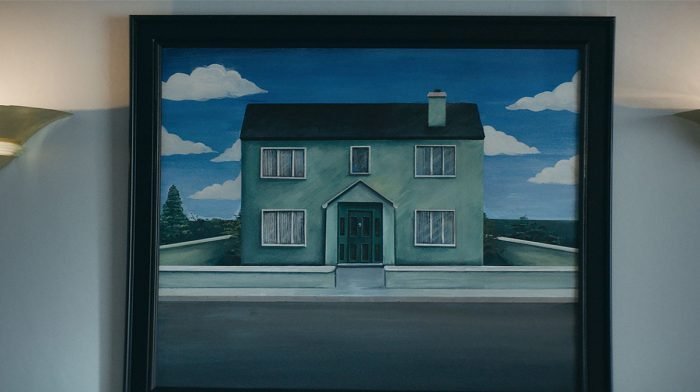 In comparison to that of her partner, Gemma’s arc is given far greater depth than Tom’s. Whilst Tom is solely resigned to his one task and bitter attitude, Gemma finds herself caring for the strange child that they find on their doorstep, although from a distance. She constantly reminds the child that ‘I am not your mother,’ despite her conflicting emotions that suggest she both cares for and despises him.

It is for this reason that Poots truly shines and is the stand‐out of the film. Though her chemistry with on‐screen partner Einsenberg is brilliant, he lacks against Poots’ constant top‐notch delivery. Plus, with Tom’s character little explored as opposed to Gemma’s, it makes him rather forgettable in the film overall.

The film, however, is less than forgettable. Screaming with weird delights and pockets of humour that lighten the mood of the otherwise depressing movie, Vivarium is not afraid to be completely bizarre and in fact embraces it. Although some of these weirder moments push the boundaries a little too far for its audience to fully understand what has just happened, it certainly leaves you with a profound sense of disbelief over the boldness of some of its choices.

Vivarium is incredibly strange. Although filled with classic cult thriller tropes, it is still an enigmatic and enjoyable watch and leaves you with enough answers to feel satisfied, but more questions to keep you thinking.

And if you leave the cinema needing a lie down afterwards, I honestly don’t blame you.

Vivarium currently does not have a UK release date.