‘S.T.A.R.S.’ If you’re familiar with Capcom’s 1999 survival horror masterpiece Resident Evil 3, just a mention of Nemesis’ catchphrase will send shivers up your spine, and cause your bowels to stir.

And if you thought Nemesis was a nuisance in the original, with his relentless juggernaut-and-mouse chasing of Jill Valentine down the dimly-lit streets of Raccoon City, then hold on to your berets because sh*t is about to get real.

Hot off the heels of their success in 2019 with a remake of 1998’s Resident Evil 2, Capcom have released Resident Evil 3 – a terrifying reimagining of Valentine’s quest for survival. 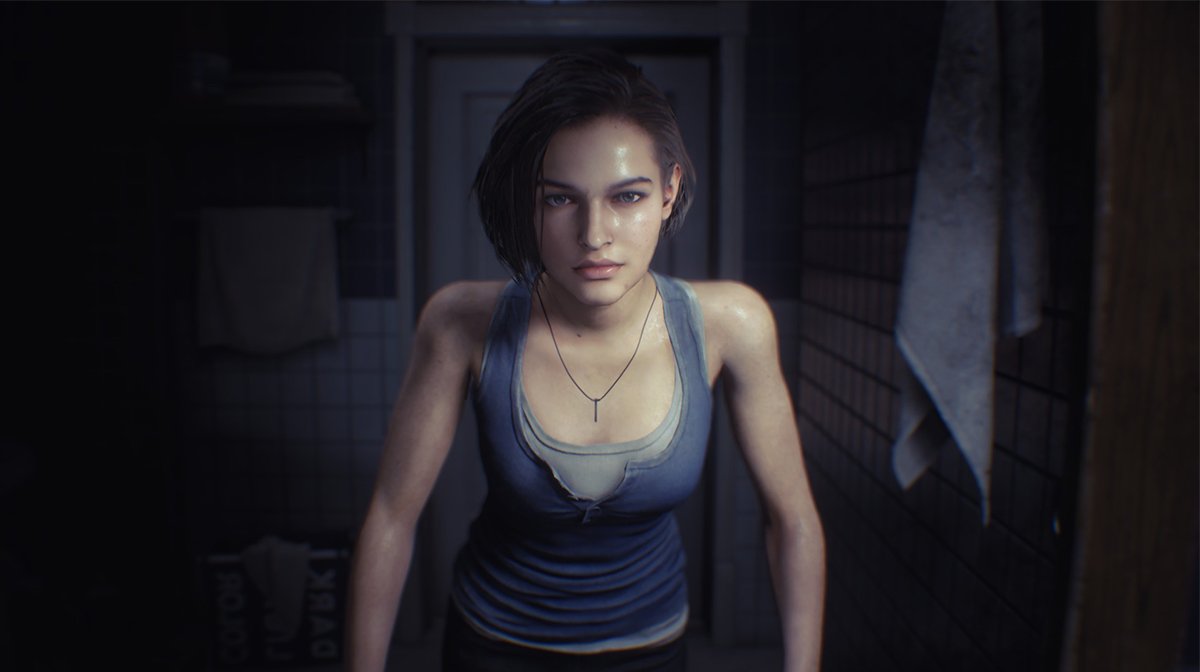 Praised by critics for its innovative retelling of an iconic survival horror story, the Resident Evil 2 remake breathed fresh air into the horror genre in gaming.

It proved that survival horror is very much still alive, and that the bygone era of claustrophobic terror can be reinvented for a fresher, contemporary gaming audience.

The Resident Evil 3 remake seems destined to follow a similar path to flesh-eating horror greatness. So what can fans look forward to?

Will die-hard fans of the franchise have their nostalgia fulfilled? And will newcomers find themselves in awe of the terror that awaits?

The most glaring difference between the original 1999 game and its forthcoming remake are its presentational changes – somewhat of an obvious development considering Capcom’s evolution over recent years.

With this change came the development of Capcom’s trusty RE Engine, which replaced its predecessor, the MT Framework, to allow greater rendering techniques that lend a more photorealistic eye to the terror that awaits in Raccoon City.

Such photorealism is achieved by a technique called ‘photogrammetry’, which allows developers to use numerous cameras from all different angles to make photorealistic textures that can be scanned in-game – none the more so exemplified than that of the mouth-watering, grease-dripping cheeseburger during the opening cut-scene in the Resident Evil 2 remake. 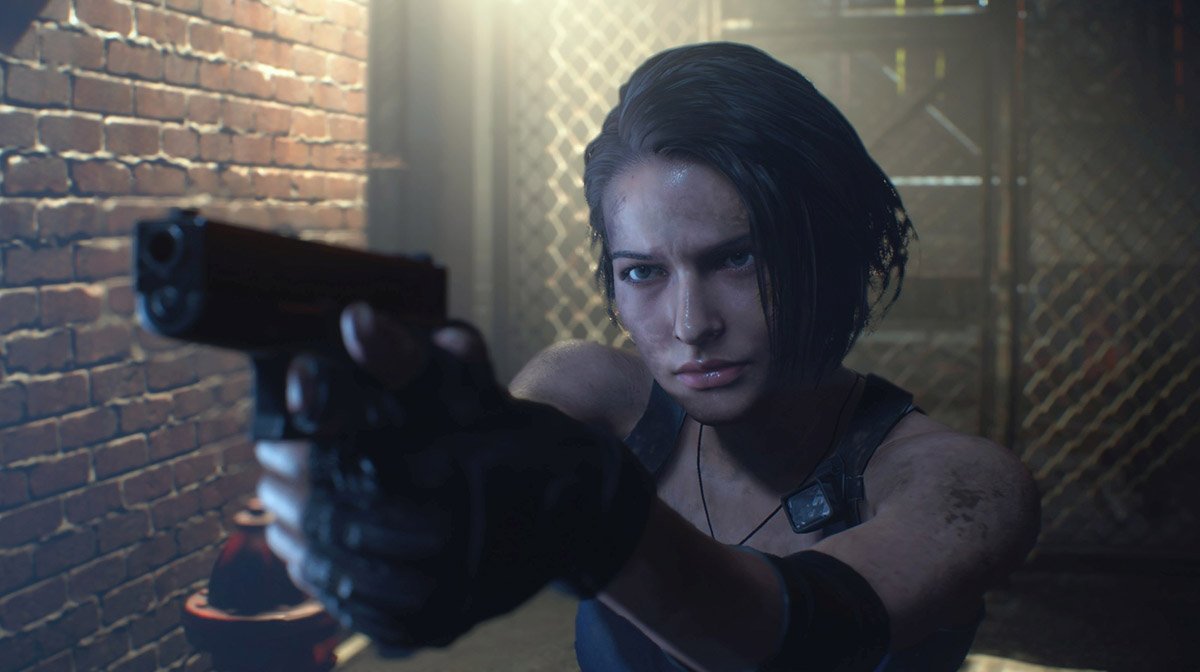 In Resident Evil 3, photogrammetry was used in the modelling of beloved villain Nemesis, this time with more teeth and a nose, changes in appearance that were quickly abandoned following a handful of deftly-targeted and hilarious memes (power to the fandoms).

Joining Nemesis in the makeover chair is franchise heroine Jill Valentine, the protagonist of numerous instalments in the franchise, and Carlos Olivera, a more rugged-looking and, dare I say, handsome result of Capcom’s photorealistic RE Engine.

Yet it is the remodelling of Valentine that sparks the most interest. 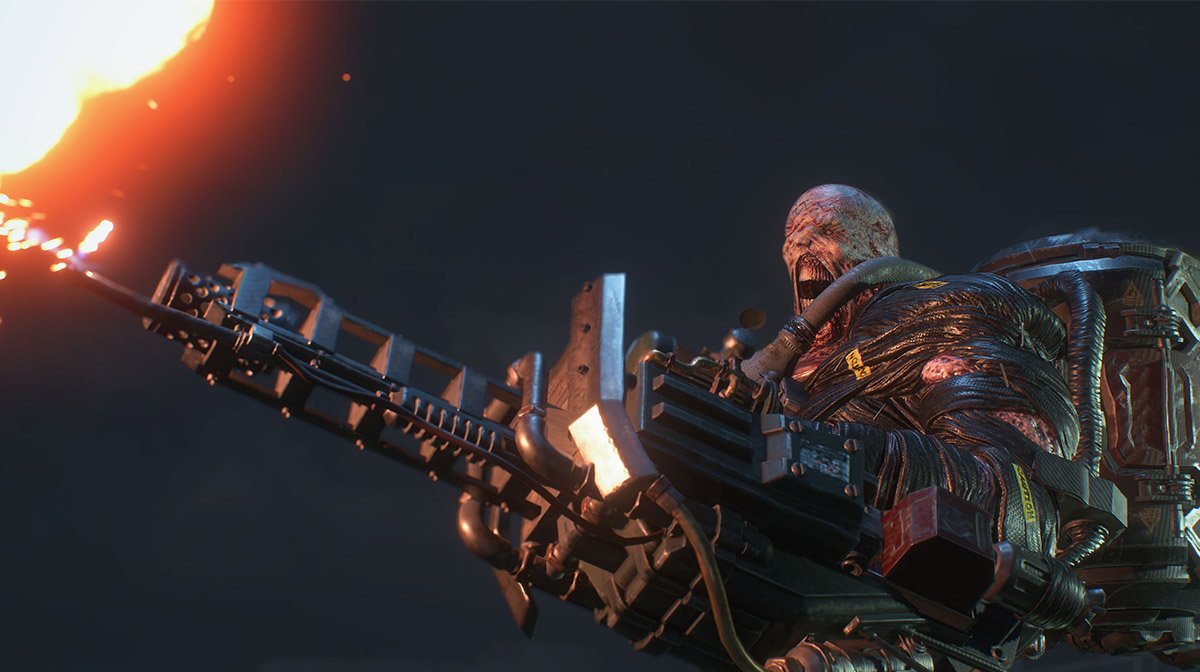 It’s no revelation to suggest that female representation in video games, particularly in terms of over-sexualised character models, has been nothing shy of appalling.

The evolution of Valentine’s design, from her original appearance in 1996’s Resident Evil to 2012’s Resident Evil: Revelations has had its ups-and-downs (the quicker we forget her chest-busting design in Resident Evil 5 the better).

In this year’s Resident Evil 3, however, Valentine seems primed for combat; marking a 2015 Lara Croft-esque turning point for the franchise. 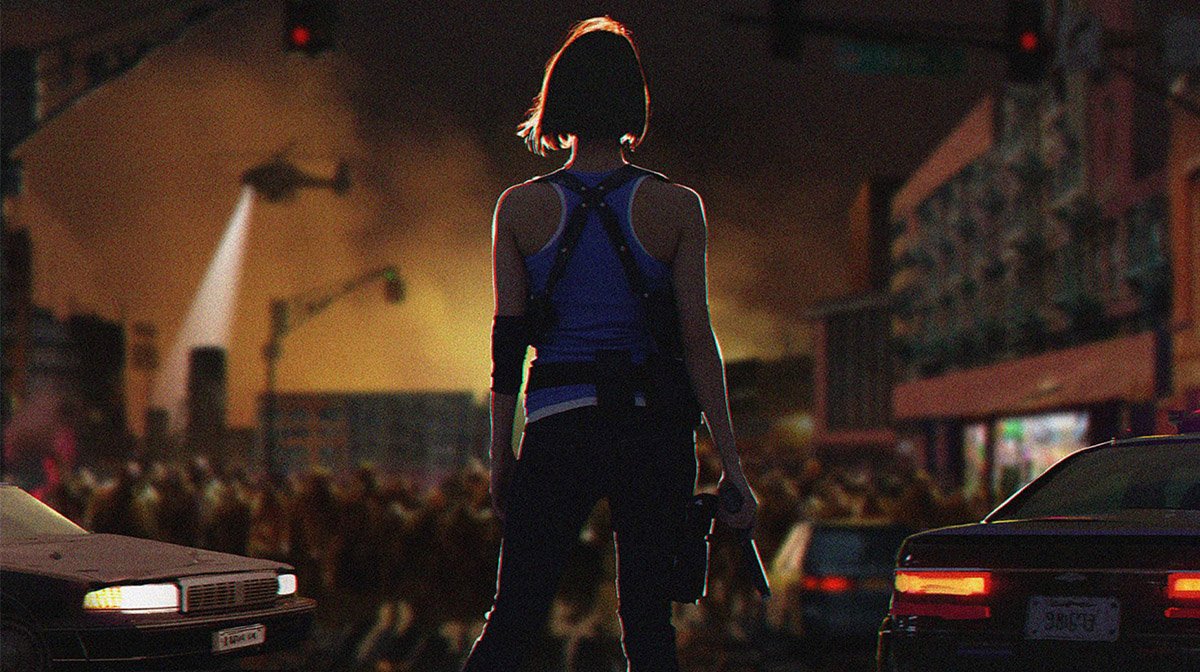 Yet this has seemed to split the RE fandom down the middle. Was this remodelling necessary (yes), or was it merely pandering to the current feminist-empowering change in video game representation? (Nope).

The Resident Evil franchise is one of the largest in the gaming sphere, and with that comes an equally gargantuan fan-base, and like any fandom, the discourse can be both accepting and volatile.

While most die-hard fans have been elated with Capcom’s sudden urge to reimagine the classics, many have been left frustrated with the presentational changes that have been made. 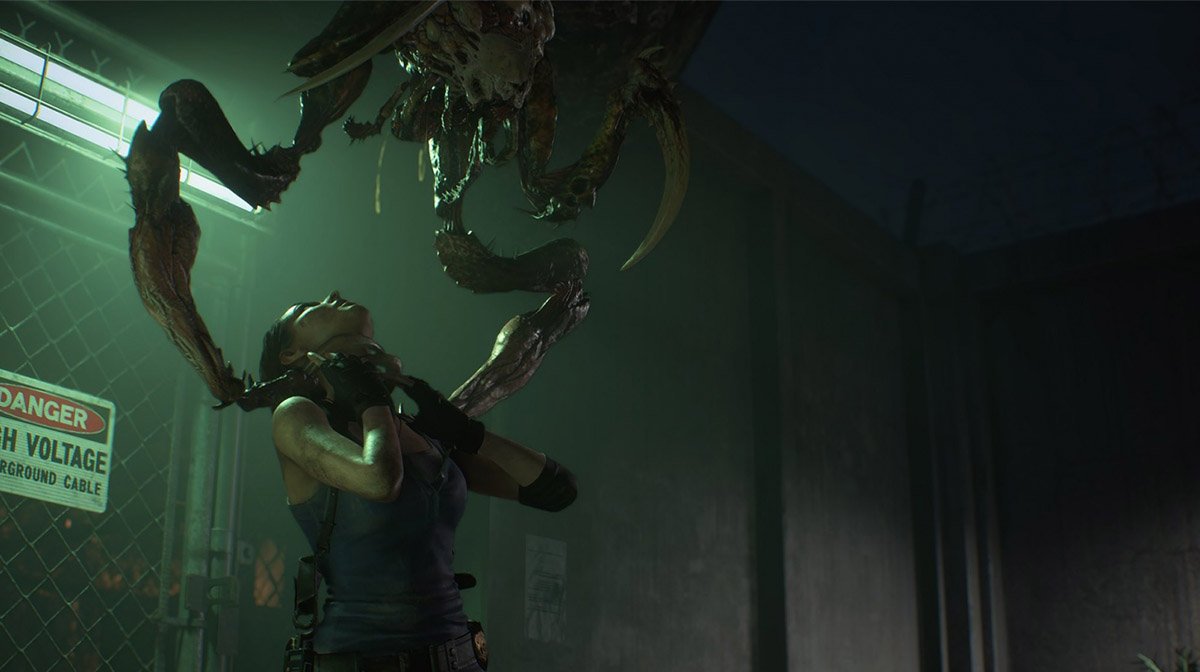 Since Resident Evil 4, Capcom has seemed to abandon its trademark fixed-camera angle aesthetic that was once the pride of the franchise.

The suspense of not knowing what is around the corner, the eeriness of wooden doors as they creak open, the intense claustrophobia of the surrounding environment as you enter new areas; all gone.

Instead, Capcom has opted for an over-the-shoulder play-style that has left fans justifiably concerned, leading many tech-savvy fans to create a fixed-camera modifier for 2019’s Resident Evil 2 remake. 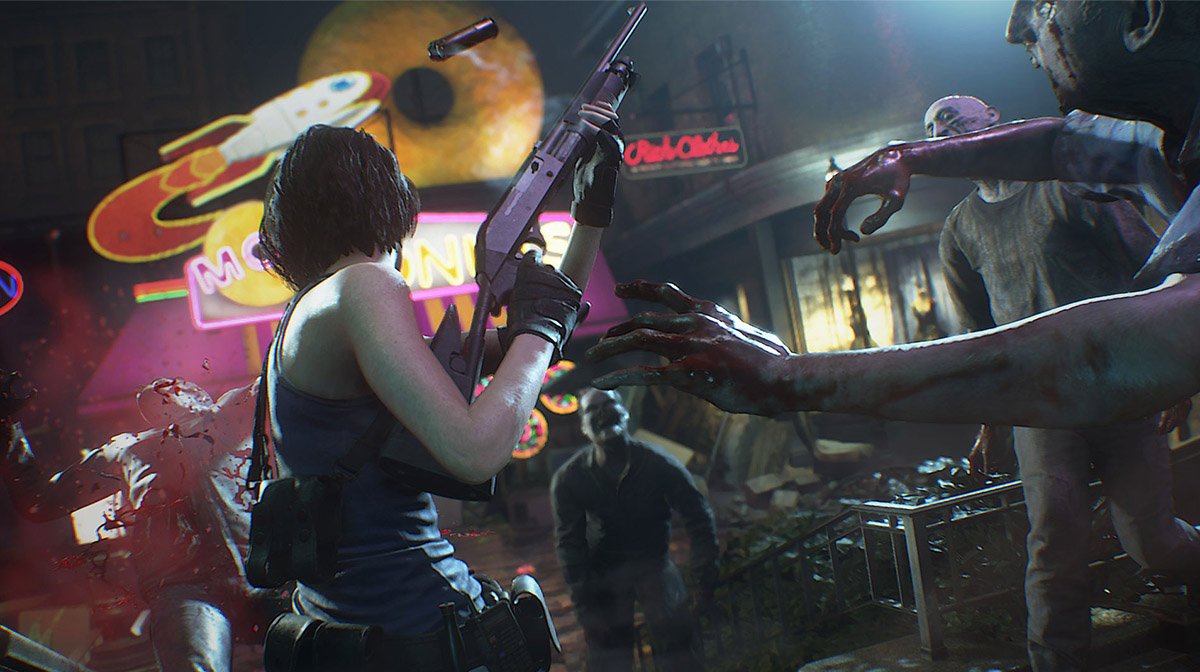 Yet Resident Evil 2 proved that survival horror can still exist independently from the fixed-angle style, that navigating the dimly-lit, zombie-infested hallways of the Raccoon City Police Department can be equally as terrifying behind the characters, as well as above them.

But the Resident Evil 3 remake seems a marginally different experience than that of its predecessor. It leans more towards action-horror than survival-horror, but that was even the case in the late 90’s when Capcom released the original.

It is true that the events of Resident Evil 2 and Resident Evil 3 run in parallel, with the narratives between the two games overlapping in certain moments; almost like a Christopher Nolan movie (but with more zombies!)

But expect more adrenaline-charged action sequences in Resident Evil 3. Valentine, unlike Claire Redfield, is fully trained in battle – and the gameplay will reflect this. 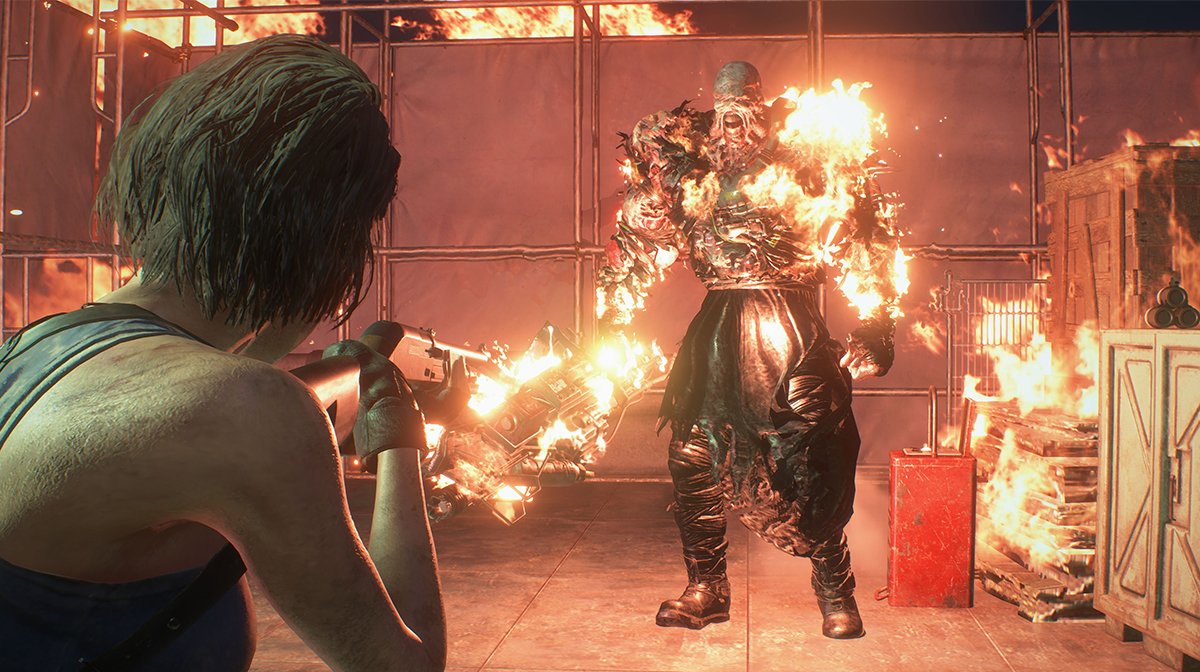 But make no mistake: Resident Evil 3 will still be a terrifying, ‘Resident Evil’ experience.

Expect zombie ambushes, complicated puzzles, character betrayals, and of course, a relentless juggernaut who will stop at nothing to cave your skull in.

We’ll see you in Raccoon City…