It has been 40 years since Stanley Kubrick’s The Shining first hit cinemas, a film that surprisingly had very little impact upon first release.

After what can only be described as a hellish production, the movie was poorly received by both audiences and critics, becoming a box office disaster.

Over the past four decades though the film has been reassessed, and people have grown to love and admire Kubrick’s artistic direction, the striking cinematography, Jack Nicholson’s incredible performance and much more.

Now The Shining is regarded as not just one of the greatest horrors ever made, but as one of the best films of all-time.

It certainly is fascinating how the movie has been so dramatically reconsidered over the past four decades, but then again, everything about The Shining is intriguing, from its troubled production to what on earth it all means.

Dedicated fans have spent years trying to crack the case, becoming obsessed, with one quick google of ‘the meaning of The Shining’ bringing up countless theories, from the more plausible to the outlandishly bizarre.

Often these theories are just as captivating as the movie itself, and there is even a documentary feature which explores this, the excellent Room 237. 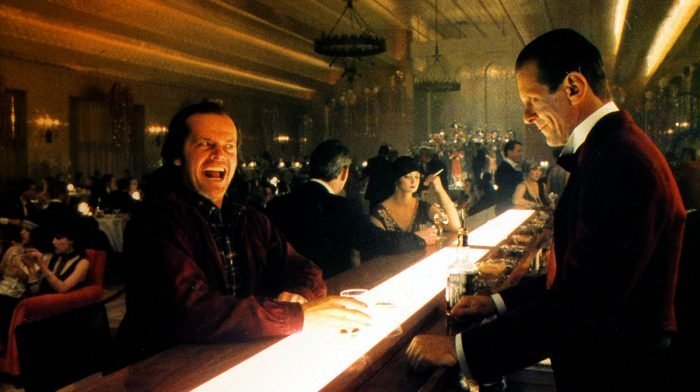 Kubrick was known to be an extremely precise and meticulous filmmaker, placing visual clues and obsessing over details, something theorists often point out emphasising everything in the movie has a purpose.

Whether they are only finding secrets in the film because they are actively looking for them, wanting to uncover something, well that’s up to you to decide.

Perhaps the most popular theory is that Kubrick used the movie to apologise for supposedly helping fake the Apollo 11 moon landing. 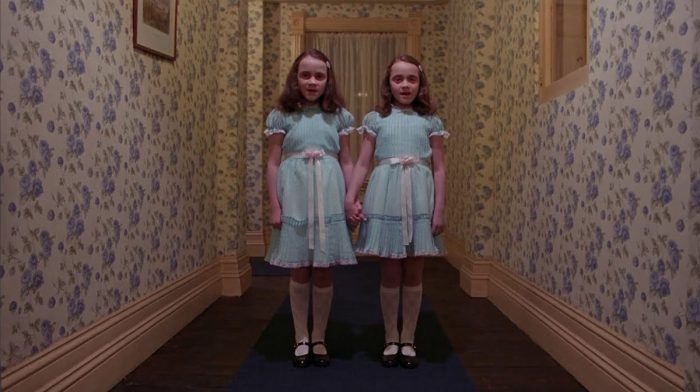 Many believe the US government hired the filmmaker to help stage the landing, following his work on 2001: A Space Odyssey, using special effects to make the footage convincing.

And allegedly overcome with guilt about his involvement, Kubrick used The Shining as a way to apologise, of course subtly as to not get in trouble with the government.

Theorists point to clues including Danny’s Apollo 11 jumper, the pantry being stocked up with Tang (which NASA provided astronauts with), the twins as representative of NASA’s Gemini programme, and the word ‘all’ in Jack’s infamous mantra, which looks like ‘A11’. 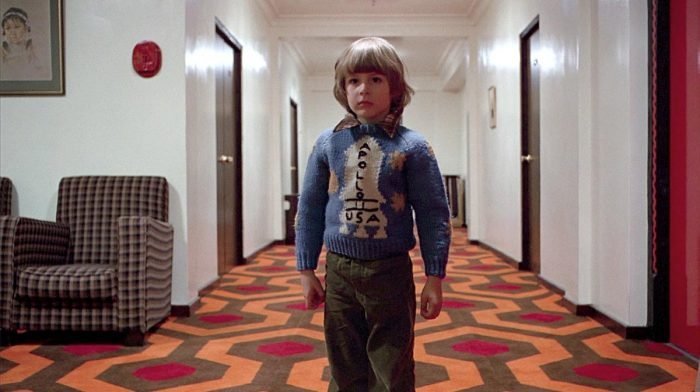 Also the room number changed from ‘217’ in the book to ‘237’ in the film, with Kubrick claiming it was at the request of the hotel used for filming, as they were concerned following the movie’s release people would be too scared to stay in the actual room 217.

Some say though the number actually changed to ‘237’ as the moon is about 237,000 miles away from Earth.

They also point out Jack’s rant at Wendy when she suggests they leave the hotel is representative of Kubrick arguing with his wife about the hoax: ‘Does it matter to you at all that the owners have placed their complete confidence and trust in me, and that I have signed a contract in which I have accepted that responsibility?’ 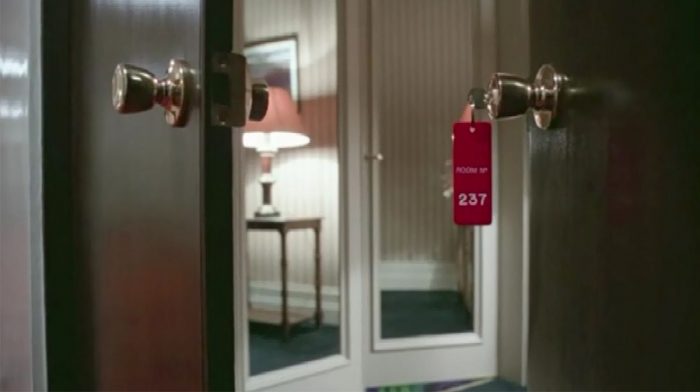 And that isn’t the only government related conspiracy theory out there, as others believe the film is a metaphor for MKUltra, the CIA’s infamous ‘behavioural engineering’ programme.

The theory goes that Jack is one of the test subjects, with the Overlook Hotel representing how the CIA’s programme has been eating away at his mind, with the supernatural visions being a result of the mind-control experiments.

These theorists point to the ‘Monarch’ ski poster in the movie as a clue, stating that ‘monarch’ was the code name used for the controversial programme. 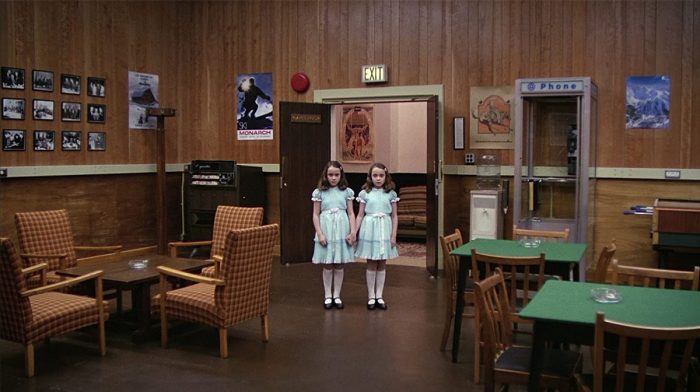 Another more plausible theory is that the movie is a comment on the treatment of Native Americans by white settlers, an indictment of the genocide.

Native American imagery is seen throughout the movie, from wall hangings, to the Calumet tins in the pantry (with the word ‘calumet’ actually meaning ‘peace pipe’.

We are also told that the Overlook sits atop of an Indian burial ground, with the blood flooding from the lift being symbolic of the bloodshed, with it coming from the souls buried underneath. 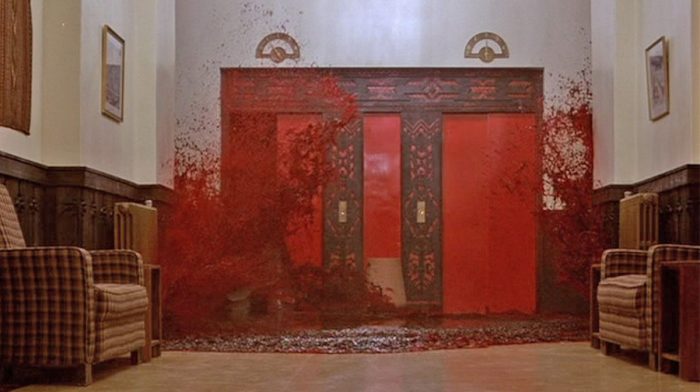 Others meanwhile suggest the movie is actually about the Holocaust, pointing to the fact throughout his career Kubrick always wanted to make a film about it, penning a screenplay called The Aryan Papers.

Kubrick ceased work on making a Holocaust centered movie, never finding a way to capture the scale of it, leading many to believe he decided to tackle it indirectly with The Shining.

Jack’s typewriter is manufactured in Germany by the brand Adler, which translates to ‘eagle’, a symbol used by the Nazis which is also spotted on a t-shirt the character wears.

The number ‘42’ is also seen throughout the movie, for example on Danny’s sweatshirt and on the license plate of car, referencing the year of 1942, which is when the Nazis initiated the ‘Final Solution’. 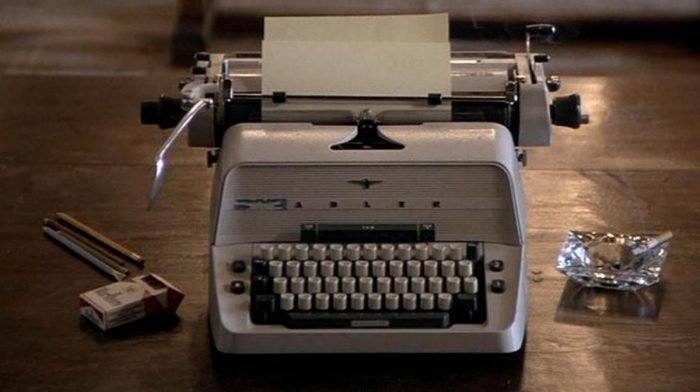 And those are only a few of the numerous theories out there.

Will we ever find out what the true meaning of The Shining is? No, probably not.

And is this a problem? Well in my opinion, not at all. Part of the beauty of the movie is how ambiguous and mysterious it is, lending itself to deep analysis and debate.

Which is exactly what fans have been doing the past four decades, and will certainly be doing for many more in the future.