That magical time of the year is approaching once again, and for director Tim Burton, Christmas 2020 has an altogether more poignant meaning.

Although it’s hard to believe, this winter marks the 30th anniversary of Burton’s Edward Scissorhands. Starring Johnny Depp and Winona Ryder, the gothic romance was unlike any movie that had come before it – or any that’s come since.

Combining a cast of doe-eyed future A-listers with a charming take on the tropes of Frankenstein, Edward Scissorhands added a dash of Beauty And The Beast, a magical score from Danny Elfman, and a sprinkling of snow for good measure. 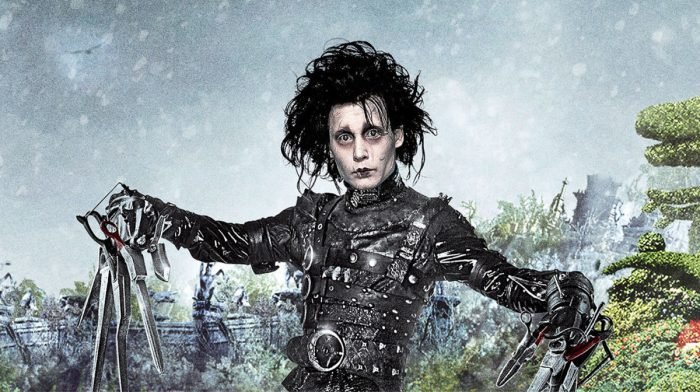 Something about the movie clicked with fans and critics alike, meaning Edward Scissorhands earned back over four times its $20 million budget and found itself getting an Academy Award nod for Best Makeup (losing to Dick Tracy).

In the decades that have passed, both Burton and Elfman have cited the 1990 classic as their favourite piece of work, but what is it about Edward Scissorhands that means – just like its titular character – it has stood the test of time?

When it comes to Edward Scissorhands, its journey started long before 20th Century Fox was casting Depp and Ryder as star-crossed lovers.

In fact, its inception stemmed back to Burton’s youth where he grew up in suburban Burbank. This nuclear bubble served as the inspiration for the candy-coated nightmare town Edward and the rest of the characters reside in. 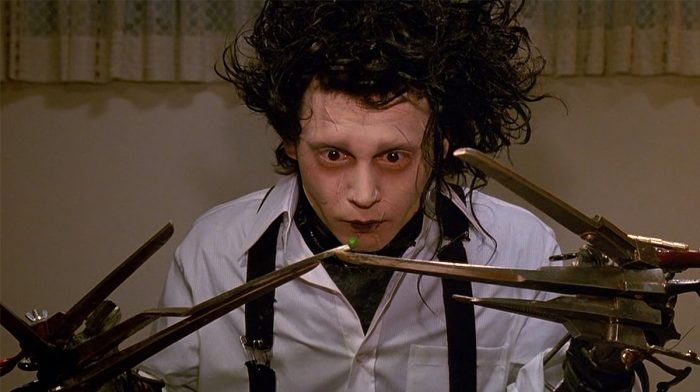 All those years ago, Burton drew a sketch of a thin and pasty boy who had knives for fingers. It was a personification of Burton’s own feelings of isolation and inability to communicate with others.

In the book Tim Burton: The Monster And The Crowd: A Post-Jungian Perspective, the director explained: “I get the feeling people just got this urge to want to leave me alone for some reason. I don’t know why exactly. It was as if I was exuding some sort of aura that said ‘leave me the f**k alone.’”

This loneliness birthed the idea of Edward, who would eventually evolve to become the tragic creature you couldn’t help but love. 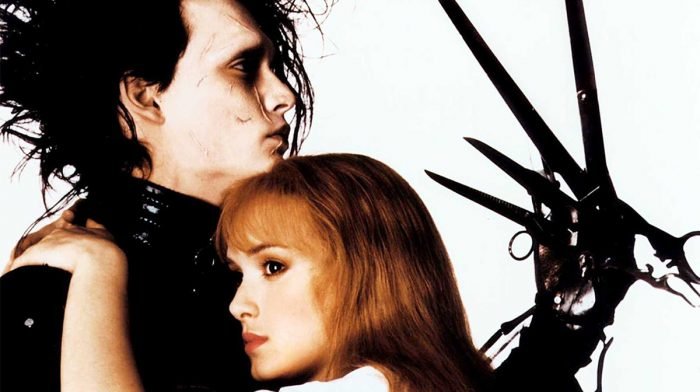 Much like the aforementioned Frankenstein, Burton and screenwriter Caroline Thompson’s story reinvented the idea of the ‘monster’ into a misunderstood figure that never asked to be born. Elsewhere, you still had Frankenstein’s brilliant scientist, however, his own fate was equally as tragic as Edward’s.

In Edward Scissorhands, the great Vincent Price played the role of The Inventor. As well as being a role specifically written for Price, it was, unfortunately, his last. This in itself gave Edward Scissorhands yet another emotional layer.

The whole movie played out like a classic fairytale, which was further emphasised by the story within a story allegory. Although there wasn’t quite the typical fairytale ending, what else would you expect from a Burton blockbuster? 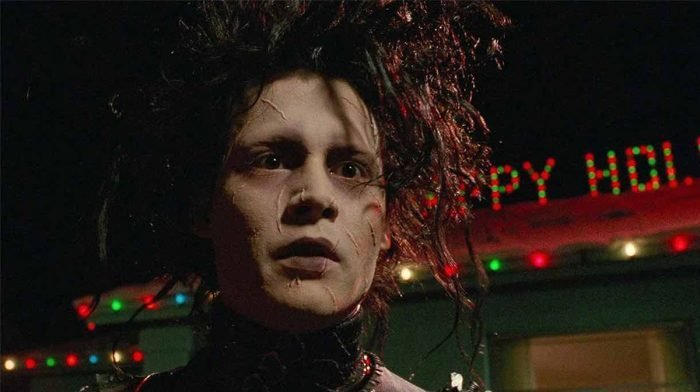 By the time Edward Scissorhands came around, Burton had already made a name for himself with gothic movies that could be enjoyed by the whole family. Both Beetlejuice (1988) and Batman (1989) had adult themes with a colourful trim running alongside them.

However, while Jack Nicholson’s Joker and Michael Keaton’s Beetlejuice dramatically stole the show, Edward was a more solemn and reserved character in the vein of Keaton’s Bruce Wayne.

It was clear Edward Scissorhands was a personal project for Burton, meaning he pursued bringing his childhood creation to life despite Beetlejuice being optioned for a sequel. 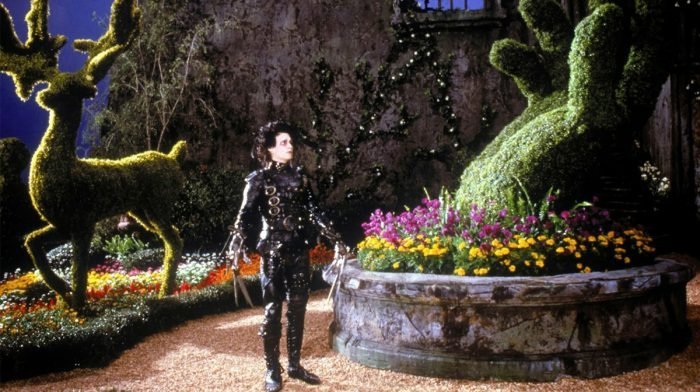 Looking back at it, Edward Scissorhands was a truly terrifying experience as a child. Much like the townsfolk, it’s not hard to see why people would be scared. Both Burton and the script did a brilliant job of crafting a crestfallen creature.

As a child, I remember seeing the trailer attached to the VHS copy of Teenage Mutant Ninja Turtles and genuinely having to hide behind the pillow when it showed the scene of Diane Weist’s Peg discovering Edward after all those years.

It was no surprise that Burton has been inspired by Universal’s classic monsters and took influence from The Hunchback Of Notre Dame and The Phantom Of The Opera alongside Frankenstein. And, despite its family rating, Edward Scissorhands was about as dark as a Burton movie gets.

Aside from the theme of death as a major undercurrent, let’s not forget Kathy Baker’s Joyce accused Edward of rape. It’s this along with his accidental injury of Kim’s brother, Kevin, that sent the movie hurtling towards its climactic and equally grim showdown at The Inventor’s sprawling estate. 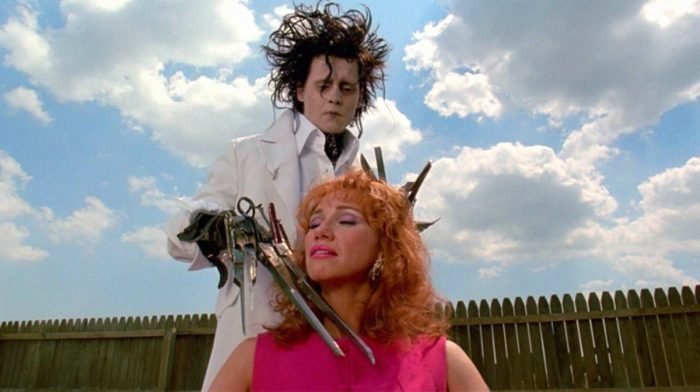 Perhaps most importantly, Edward Scissorhands set the wheels in motion for his long-term collaboration with Depp. From Sweeney Todd to Sleepy Hollow, Charlie And The Chocolate Factory to Alice In Wonderland, the two go hand-in-hand like a ghoulish Bonnie and Clyde.

Ironically, it could’ve been so different for the Burtonverse we’ve come to know and love over the years. Back in the late ‘80s, Tom Cruise was Hollywood’s hot ticket thanks to Top Gun and was the first choice for the role of Edward.

According to writer Thompson (via Dazed), Cruise was just a snip away from the role but was eventually canned for asking too many questions about Edward’s personal hygiene and eating habits. Thankfully, Depp was coming into his heartthrob prime and stepped into the role of the pale-skinned shut-in.

Depp and Ryder were a couple in real-life at the time, which only boosted their respective performances as Edward and Kim. Speaking about Ryder’s role, is any single scene more iconic that her twirling in the garden to Elfman’s melancholy soundtrack? The image is so striking, it was used during the end montage. Even all these years later, it won’t leave a dry eye in the house. 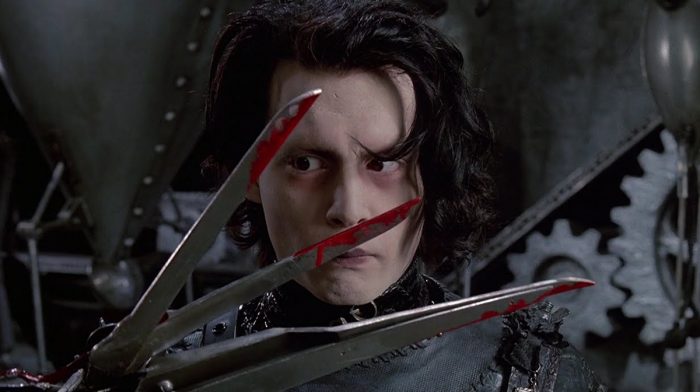 Looking at the legacy left behind by Edward Scissorhands, it also had the honour of being adapted into a stage show. Up there with Sister Act, Billy Elliot and the bizarre Silence!, The Musical, it’s a major testament that Burton’s work stepped off the silver screen to tread the boards.

Thankfully, we shouldn’t have to worry about a shoehorned sequel or upcoming reboot starring the Stranger Things cast. Celebrating the 25th anniversary in 2015, Burton told EW that he’d “probably” leave Edward in his perfect little snowglobe.

Discussing the idea of a sequel, Burton explained: “I think things like that are nightmares. For me, they’re very singular things, and I think — yeah, some things, I easily get why you make more movies. Trilogies, and sequels, and octogoni. I get it. But for me, they’re usually just singular things.”

Like so many of his movies, it would be hard to imagine Edward Scissorhands being revamped as a sequel three decades later. Then again, there are still those persistent whispers of Beetlejuice 2 that refuse to die. 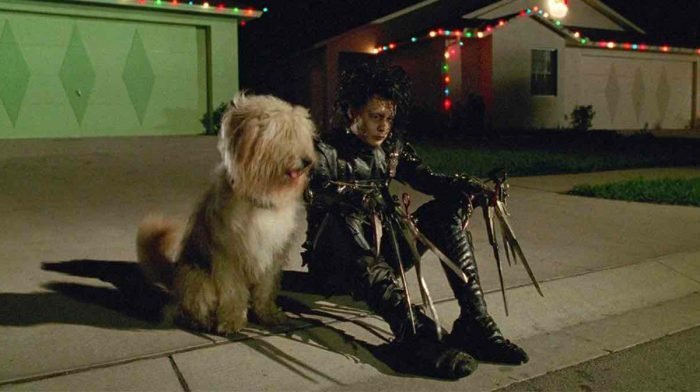 All of which have similar themes of abandonment and isolation for its outcast characters including Oswald Cobblepot, Ichabod Crane, and Emily the Corpse Bride.

Is this Burton’s masterpiece? Quite possibly. Is Edward his most brilliant creation? Most definitely. Either way, Edward Scissorhands is a gothic delight wrapped in the pink bow of a candy floss suburbia.

Even as the doorbell rings and Peg Boggs from Avon stands there some 30 years later, Edward Scissorhands is remembered as a heartfelt horror that had taken many of us into adulthood.