In 1996, Tom Cruise and Brian De Palma disavowed what we thought we knew about action movies with their reimagining of the Mission: Impossible TV series.

Catapulting a post-Top Gun Cruise even further into the mainstream, the bolshy blockbuster of the same name introduced the world to Ethan Hunt and cemented him up there with the John McClanes, Ellen Ripleys, and John Rambos of the cinematic world.

While Mission: Impossible would go on to become a box office hit and spawn a whole franchise of movies, it did struggle to even make it to the silver screen.

This is the story (if you choose to accept it) of Mission: Impossible’s not-so impossible mission. 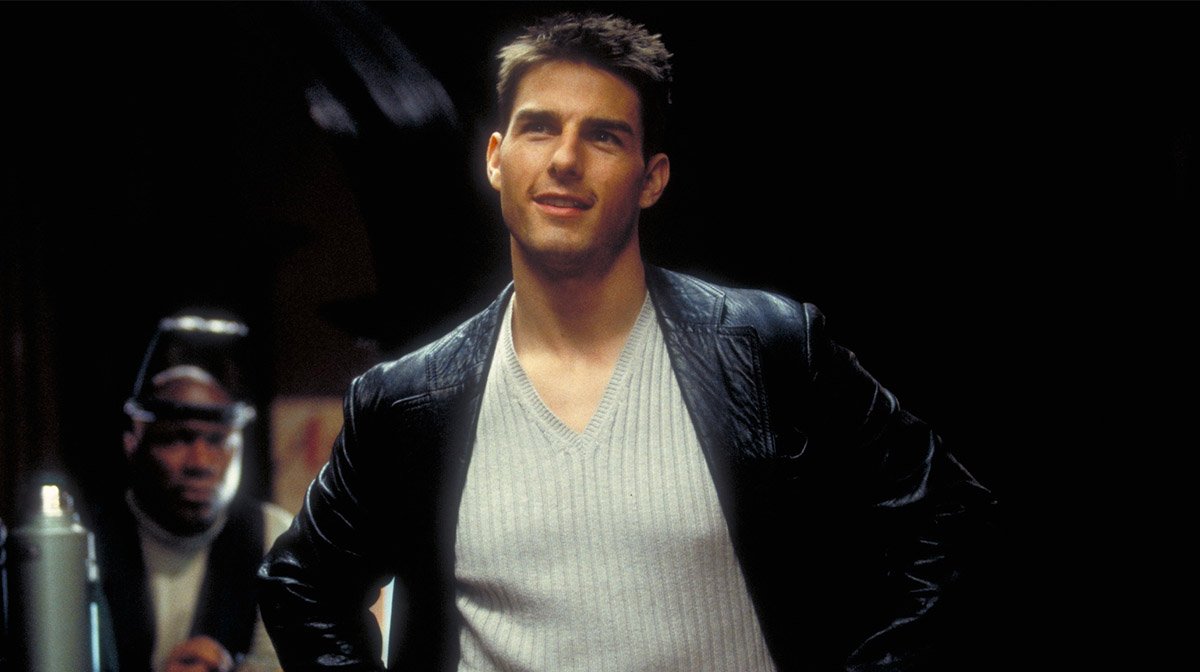 Even though Mission: Impossible made an impressive $457.7 million against a budget of $80 million, that doesn’t mean it was smooth sailing. Taking the general premise of the 1966 TV series and its 1988 revival, De Palma’s film honed in on the Impossible Missions Force (IMF) and their fight against terrorist organisations.

With time ticking away like the title sequence’s fuse, writers David Koepp and Robert Towne are credited with Mission: Impossible’s screenplay, however, neither was apparently happy with shoehorning in a story around the stunts. 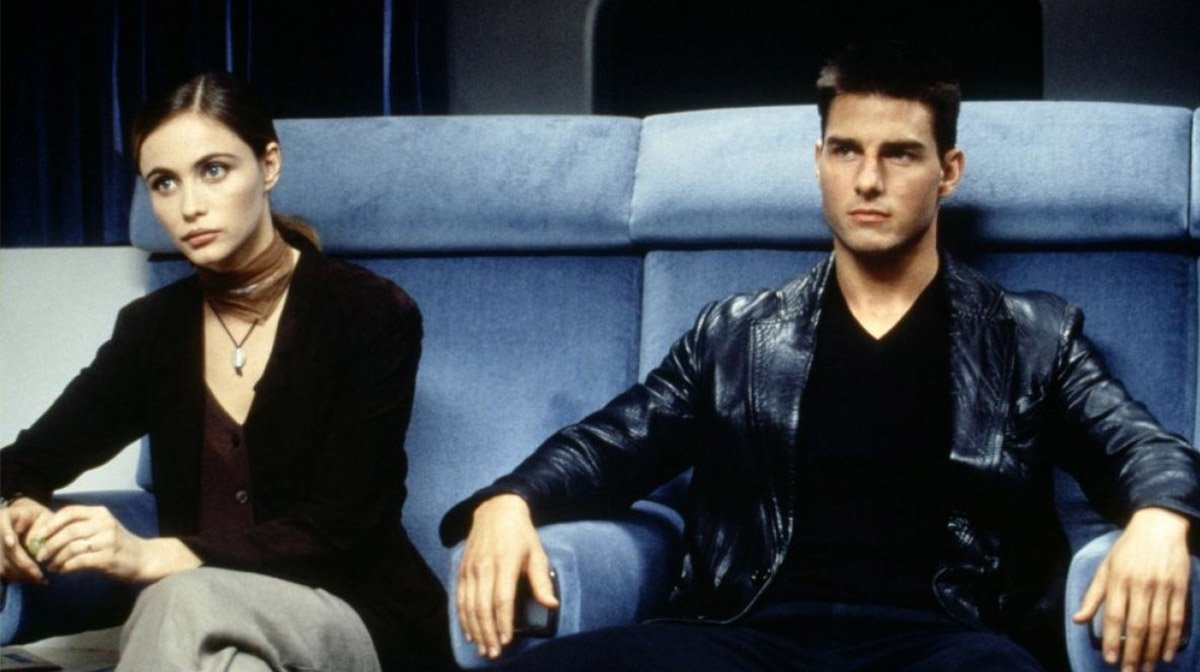 Out of the gate running, Mission: Impossible wasted no time in delivering its own Game Of Thrones Red Wedding by killing off OG M:I character, Jim Phelps.

Peter Graves refused to reprise his role from the series, meaning Jon Voight took the part. More than just offing the last tie to the Mission: Impossible of old, the opening scene in Prague tore through the IMF in grisly fashion and made Cruise’s Hunt the sole survivor – or so you’d think.

From here, Mission: Impossible delivered a barrage of more stunts and twists. 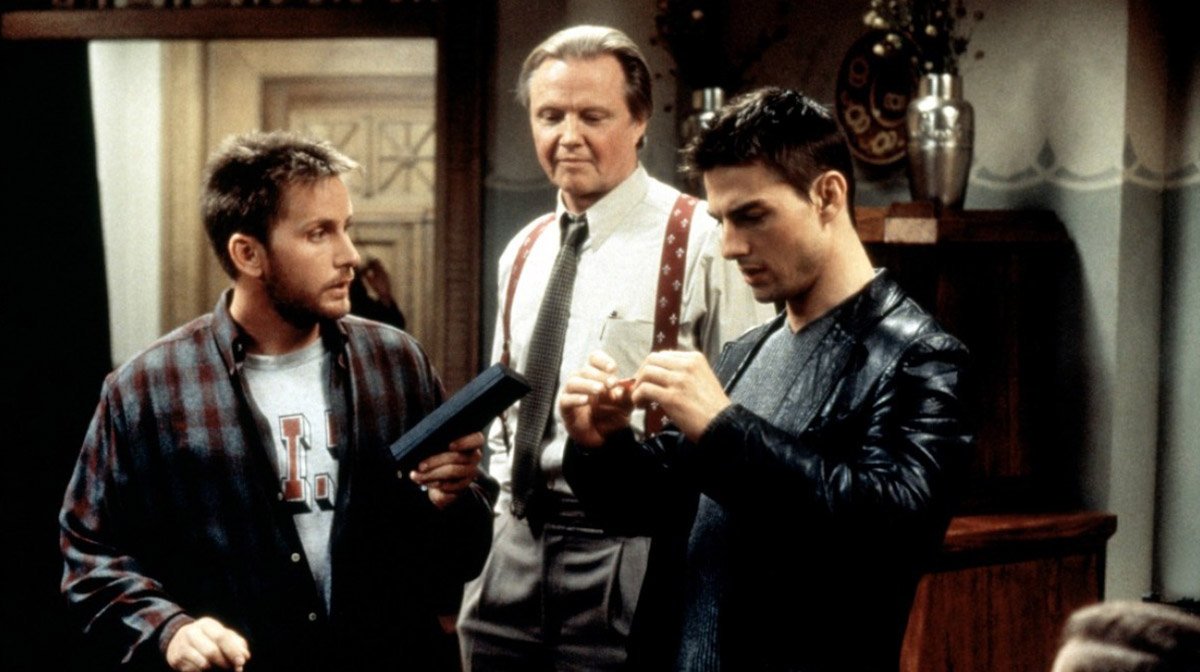 Although Paramount wanted a tight leash on a $40-$50 million budget, with Cruise’s ambitions for increasingly outlandish stunts, that was never on the cards.

Mission: Impossible’s snappy dialogue was spliced with a variety of stunts, with one of the biggest being the now-infamous fish tank scene.

Alongside worries flying glass could injure those on set, De Palma said it didn’t look realistic enough using a stuntman. Stepping up to the plate, Cruise took one for the team and started his legacy of performing his own stunts for the franchise. 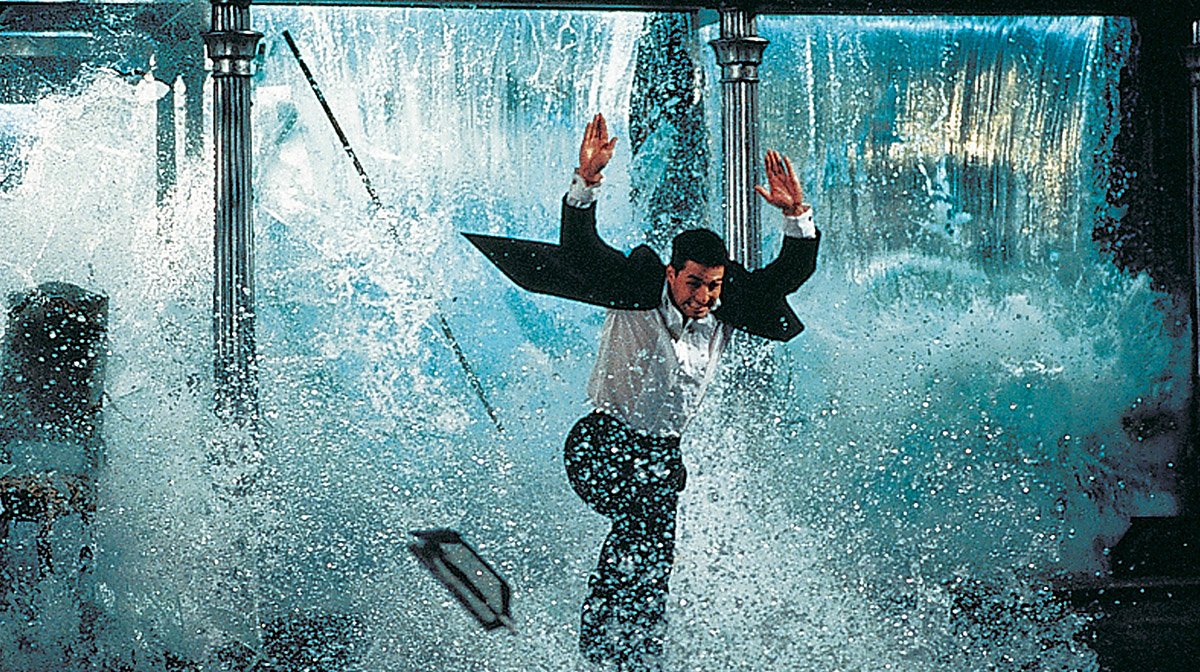 Other iconic moments include the vault scene. In a 1996 interview, Cruise described this as the most difficult to pull off and said lying parallel was physically exhausting. The legendary scene has been analysed to death, but few know Cruise used pound coins in his shoes to act as a counterweight.

But that vault scene was just a jumping-off point for an action-packed finale that came with its own problems.

Mission: Impossible was always going to go out with a bang, which included a thrilling helicopter chase through the Channel Tunnel. Cruise and co. eyed the notoriously fast TGV train, but French authorities wanted nothing to do with the movie. And when that was resolved, the track wasn’t available.

De Palma and Cruise did get their sequence by seeking out a skydiving machine that was the only one of the kind in Europe. It may have replicated the velocity of riding atop a train thanks to its 140mph winds, but apparently left the lead “black and blue” for days. 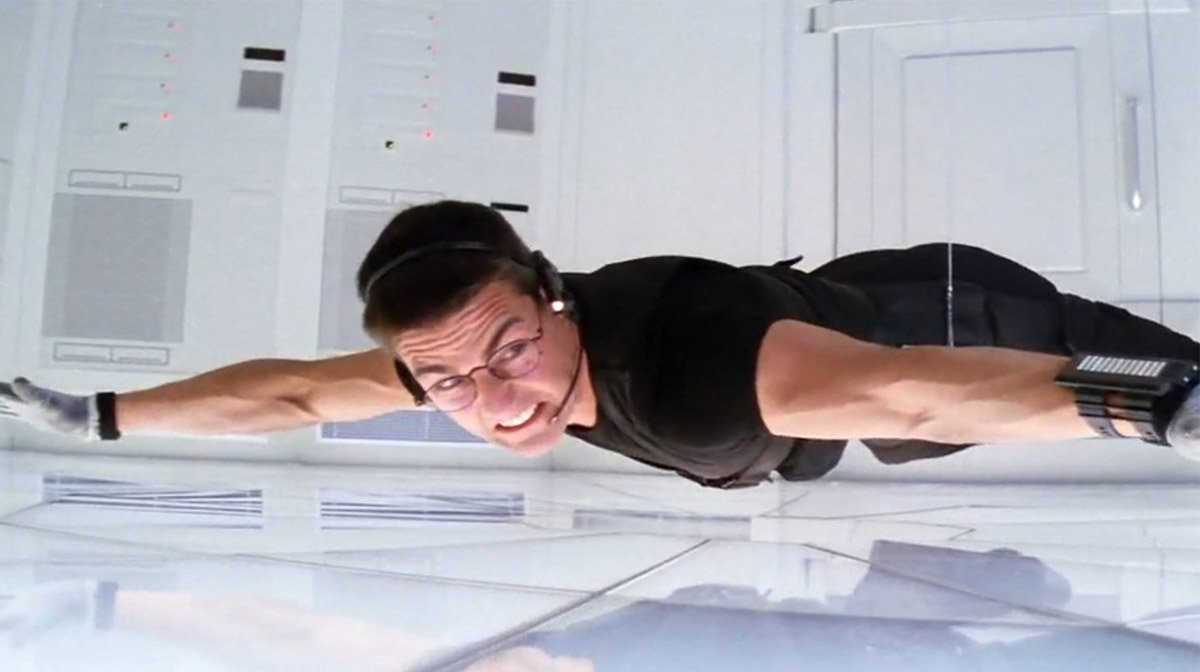 In the end, Mission: Impossible was about as far away from the original series as you could get.

Fans of the show slammed the decision to reveal Phelps as the ultimate traitor and the one behind the butchering of the IMF in Prague. As well as the twist leading to Grave’s prompt departure from the project, his co-star Martin Landau (Rollin Hand in the series) had plenty to say.

Landau told MTV in 2009, “it was basically an action-adventure movie and not Mission.” And if that wasn’t enough, Landau added a final barb and concluded, “the script wasn’t that good either.” 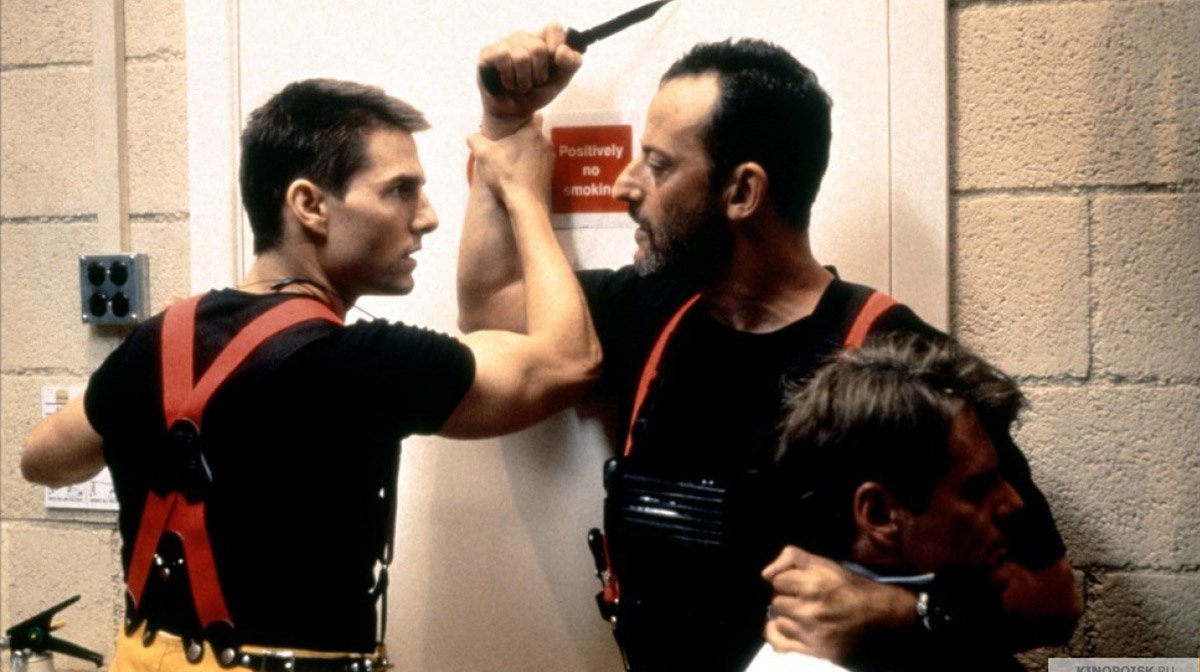 It was a brave move to alienate an already established fanbase that tuned in for the Mission: Impossible of yesteryear, but just like Martin Campbell reinvented the wheel with GoldenEye and brought 007 to a new generation a year later, the gamble paid off.

Despite teething problems and death-defying stunts, Mission: Impossible came in on time and under budget (excluding marketing costs). With Cruise’s mission accomplished, it was time to sit back and watch the dollars roll in.

Looking at the landscape of action movies in the ‘90s, they were remembered for campy outings like Point Break, True Lies, and GoldenEye. Even Mission: Impossible would be followed by Con Air and Speed 2: Cruise Control.

Taking a different stance, Mission: Impossible still had flashes of humour but gave fans something more grounded than they’d seen before. 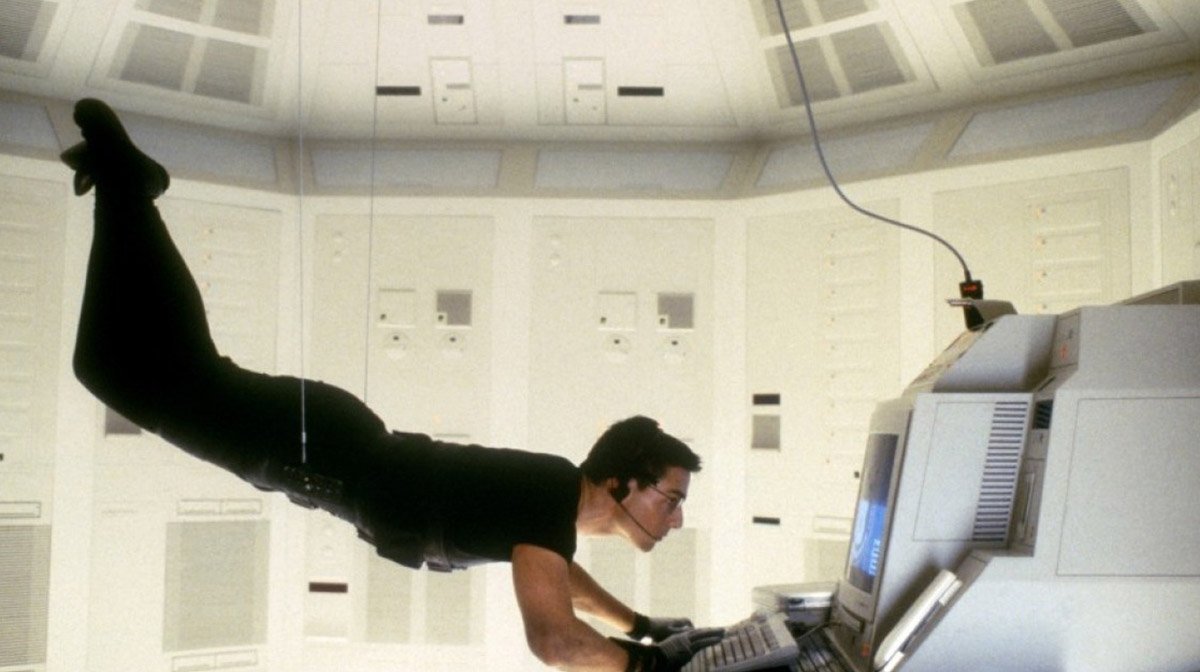 These days, Mission: Impossible seems rather tame compared to climbing the side of the Burj Khalifa (Ghost Protocol), Cruise holding his breath for six minutes (Rogue Nation), or dangling off a helicopter by a piece of rope (Fallout).

Still, it set the precedent for what was to come and lit the fuse on what has become one of Hollywood’s biggest action franchises.