Marvel fans have been demanding it, and last night, their dreams finally came true.

The first trailer for Spider-Man: No Way Home was released on social media, and reactions have been through the roof.

The trailer was released a day after a leaked version with unfinished special effects was making the rounds, and for those who managed to avoid that earlier leak, they were in for some big surprises – the biggest of which might be the extent to which this film appears to be setting up the Doctor Strange sequel In The Multiverse Of Madness.

Based on this first trailer, here’s everything we can expect from Tom Holland’s third film as the webslinger.

Picking Up Where We Left Off 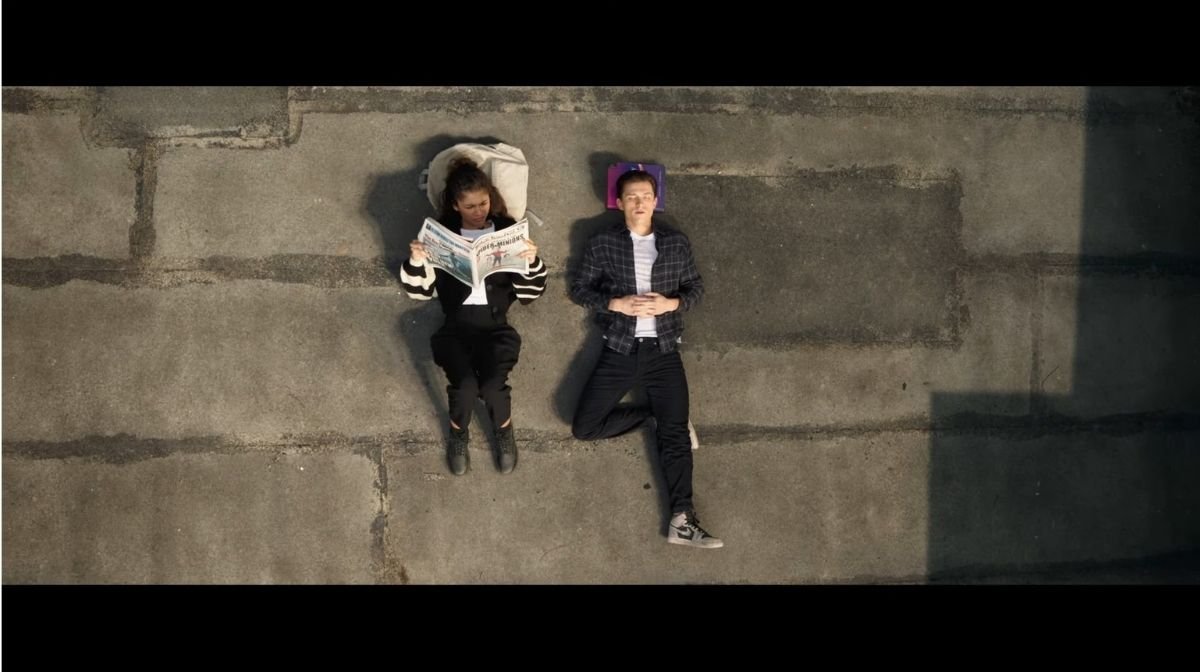 We open in a moment of calm. Peter Parker’s identity was revealed to the world in dramatic fashion at the end of 2019’s Far From Home, but here, things still feel like normal.

MJ (Zendaya) is jokingly reading the various tabloid reports speculating on Spider-Man’s supposedly villainous powers. But considering he’s still able to steal a quiet moment with her, things can’t be as bad as they seemed for Peter at the end of the last film, surely? 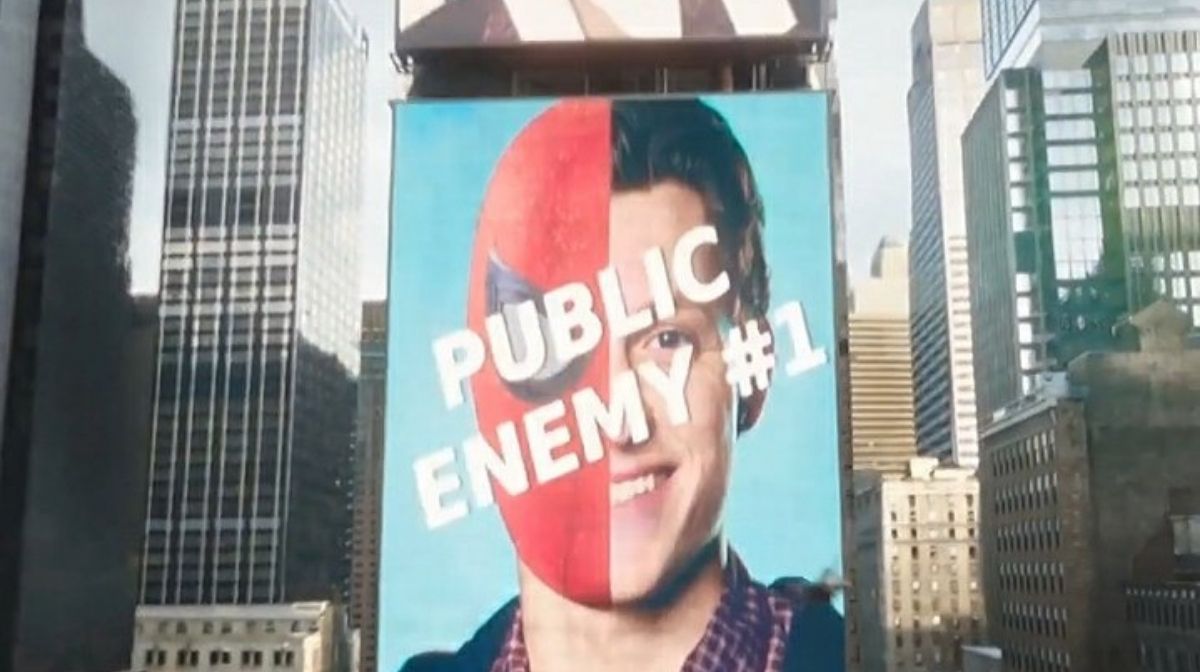 Of course not. Picking up seemingly straight after the events of that sequel, which closed Marvel’s Phase Three, No Way Home shows Peter Parker has a lot to contend with.

On top of that, his classmates are fascinated by Peter secretly being the hero, not giving him a moment of peace during school hours.

And after school? Well, that’s when he has to deal with police questioning over the fallout of being framed by Mysterio. 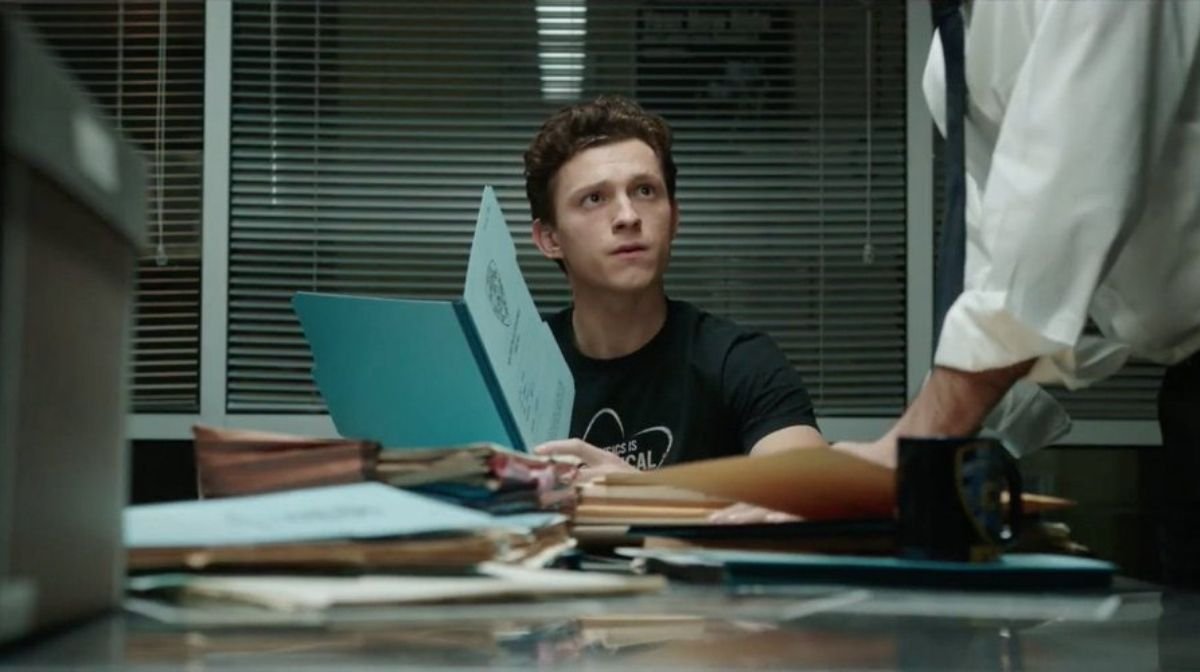 This brief shot has led many to speculate that this is Peter Parker talking to lawyer Matt Murdock – better known as Daredevil.

The character was played by Charlie Cox in three seasons of Marvel’s Netflix series. As both characters are native New Yorkers, it makes sense that Matt would be Peter’s lawyer. But is this just wishful thinking from fans?

Anyway, back to Peter’s plan to escape the spotlight… 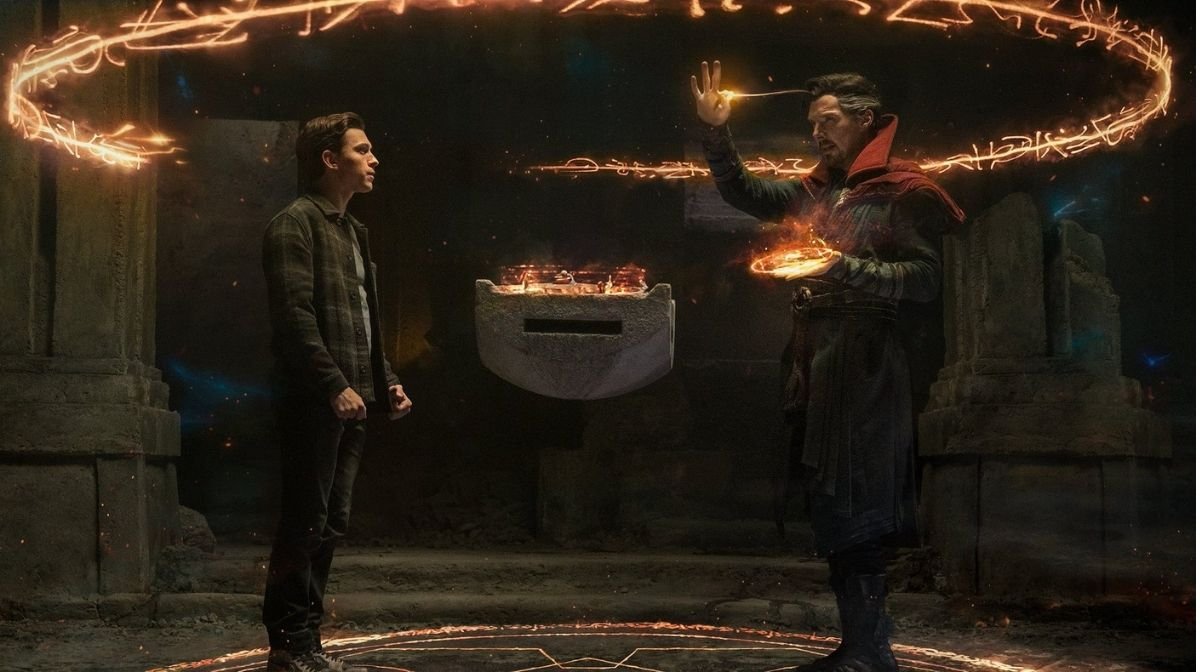 Paying a visit to Stephen Strange (Benedict Cumberbatch), Peter outlines his idea: for everything to get back to normal, a spell must be cast so people forget he’s Spider-Man.

Surprisingly, Strange agrees to do it – but Peter gets cold feet at the last moment, when he realises his closest friends will also forget.

However, this is far from the biggest problem Peter and Stephen have caused…. 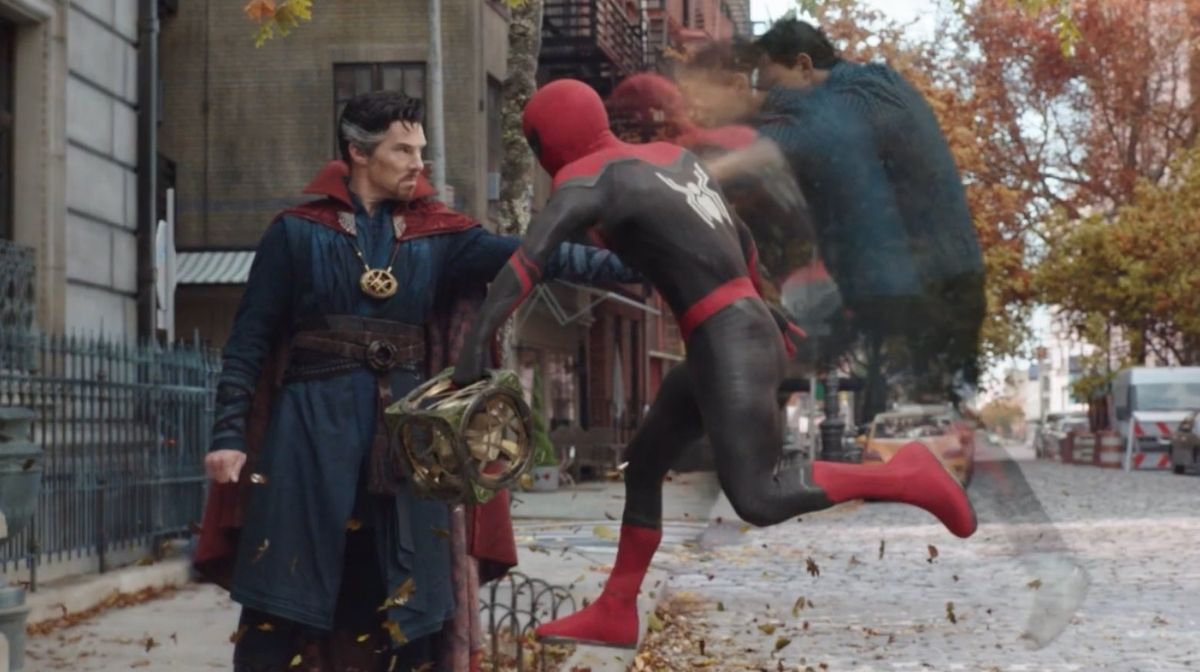 By casting a spell that causes a significant shift in people’s perceptions of reality, the pair have unwittingly caused mass disruption in the multiverse.

If this sounds ever so slightly similar to the plot of WandaVision, this is intentional – Scarlet Witch is going to be a major character in the Doctor Strange sequel, In The Multiverse of Madness, which is the Marvel release directly following this one.

And as that sequel sees Doctor Strange still in the multiverse, it’s safe to assume our heroes won’t be able to stop all the chaos this time around.

Interestingly, the great Sam Raimi (director of Tobey Maguire’s Spider-Man trilogy) is returning to the Marvel universe to direct that instalment – which suggests that many of the classic characters from his saga who will be reintroduced in No Way Home may be sticking around. 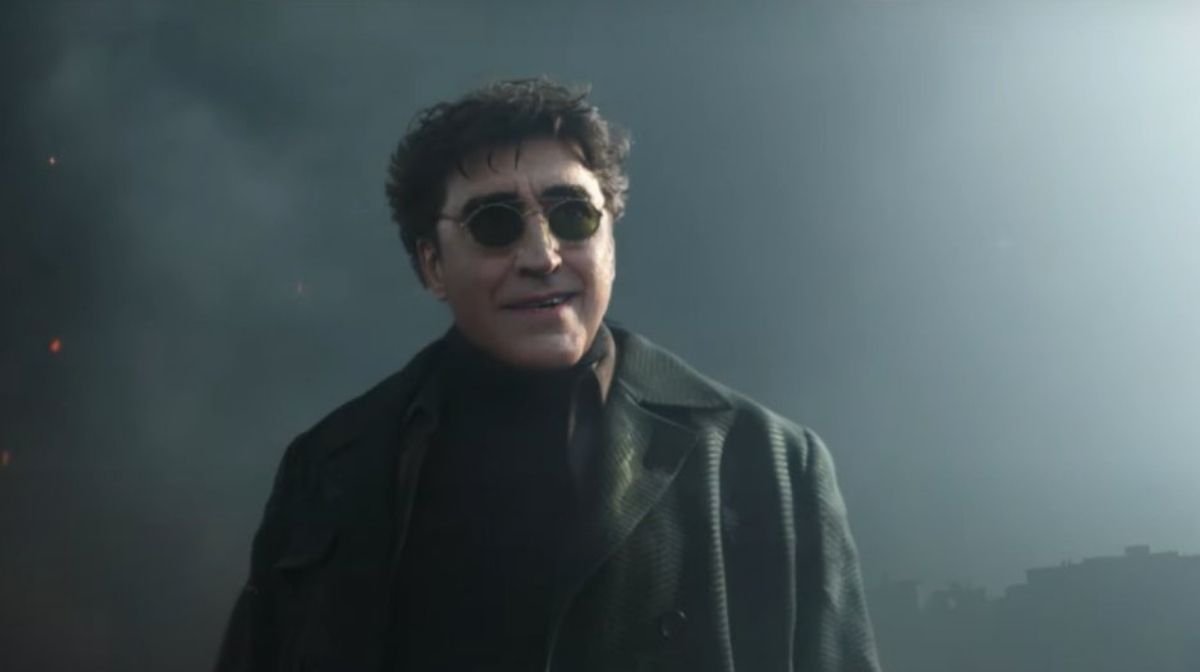 The rift in the multiverse sees multiple Spider-Man villains from the franchise’s past incarnations make their debut in the MCU. The only one we get a direct glimpse of is Alfred Molina’s Doc Ock, but his introduction teases something even bigger.

His one line of dialogue (“Hello Peter”) makes little sense when you realise he’s never actually encountered Tom Holland’s Peter Parker before. Is this hinting at Tobey Maguire’s (re-)arrival?

On a lighter note, this shot shows that for all the beef between Martin Scorsese and Marvel fans, the studio’s films are clearly following in his footsteps.

The very distracting de-ageing technology here seems to be the same CGI that was used to make Robert De Niro and Joe Pesci look younger in The Irishman. 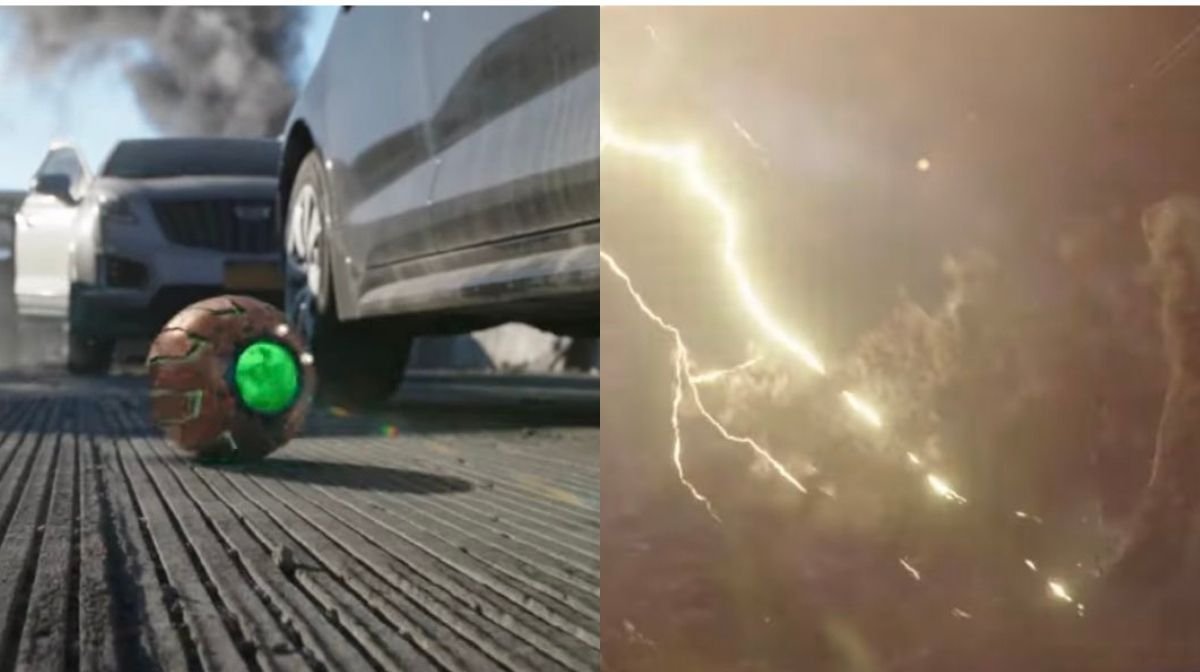 Doc Ock isn’t the only villain returning to torment Peter Parker, with a few more classic characters teased. The easiest of these to spot is Willem Dafoe’s green goblin. That nightmarish laugh that used to scare you as a kid is back, and piercing your eardrums as we see his famous pumpkin bombs roll on screen.

And it’s not just the Tobey Maguire era of Spider-Man. Jamie Foxx’s Electro, who was a nemesis to Andrew Garfield’s Spider-Man, also has his big return teased. His lightning is mixed in with what appears to be Sandman’s, well, sand.

A very brief snippet of audio that some fans have claimed to be Lizard also plays in the background of one scene. He was the villain in Garfield’s first outing, where he was played by Rhys Ifans. 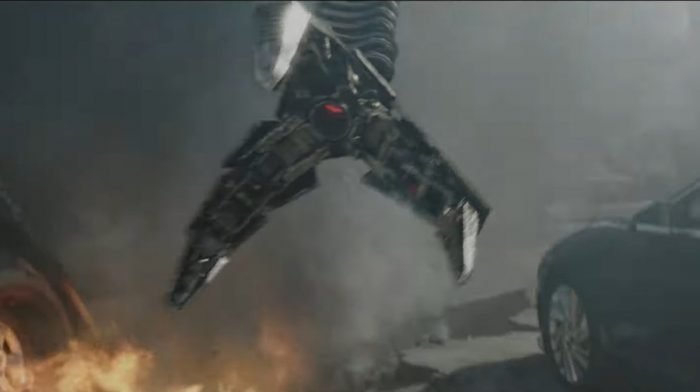 As any fans of the franchise will know, these villains are all part of the Sinister Six – a group of supervillains originating in the Spider-Man comics.

Up until now, they’ve never appeared onscreen together, but it seems they’re joining forces to become the worst nightmare of all three Peter Parkers.

So now we know all the pieces that are in place – but everything else about the plot is being kept tightly under wraps. Well, until Tom Holland inevitably spoils the film, that is.

Spider-Man: No Way Home is released in cinemas on 17th December.