Finally hitting UK cinemas today, Everything Everywhere All At Once delivers exactly what its fantastic title promises.

All of which doesn’t even scratch the surface of the latest movie from director duo the Daniels (Daniel Kwan and Daniel Scheinert), who previously brought us the infamous Swiss Army Man – yes, the film that featured Daniel Radcliffe as a farting, jet skiing corpse. 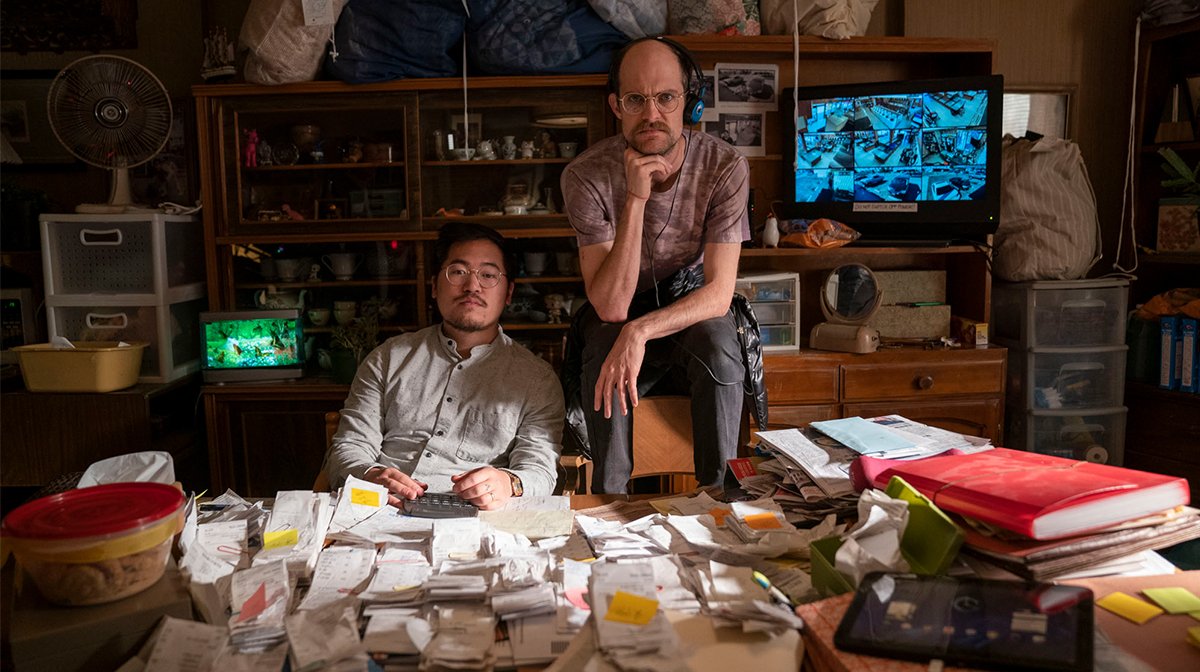 The question here is: how on earth did the Daniels come up with the concept behind the genre-spanning adventure that is unlike anything cinema has seen before?

As Scheinert tells Zavvi, it all started with wanting to make a multiverse movie that evolved into a reflection of internet culture: “The very seed of the idea was a multiverse action movie where you steal powers from a parallel life, but also freak out about those other lives.

“It was about what the idea of the multiverse makes us feel, asking why does it resonate? We then realised that modern life and the internet feels kind of like a multiverse which is why it was resonating with us. 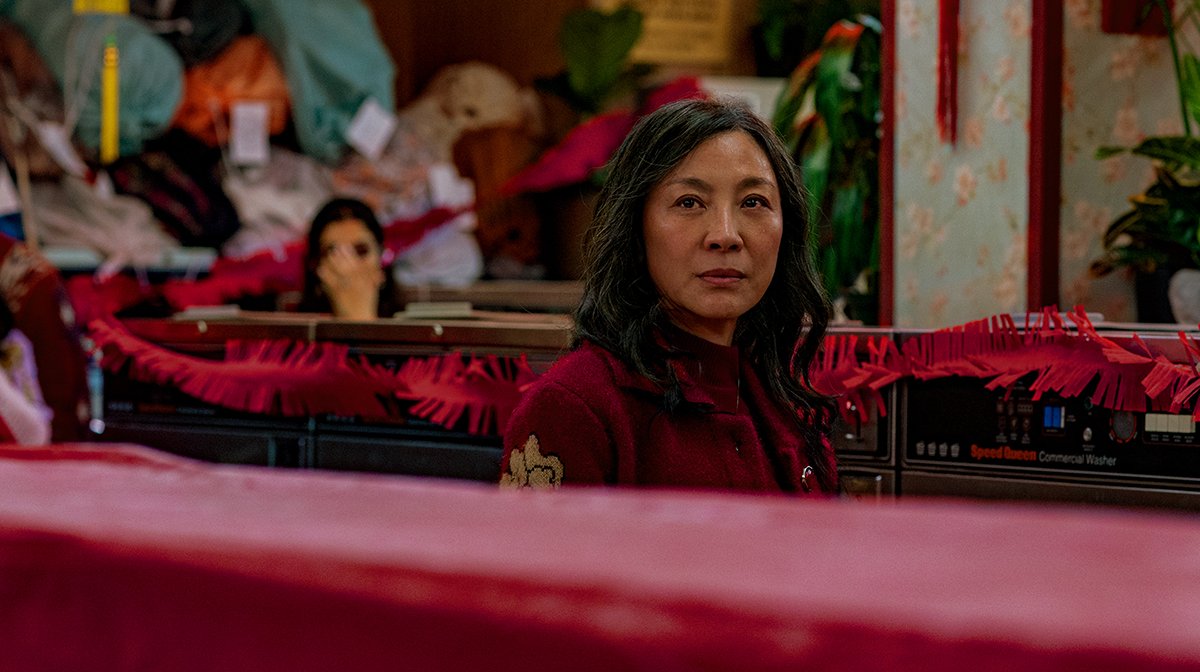 “When you scroll through social media, there’s 20 contradictory genres, tones, jokes and stories. Our human brains aren’t evolved to process this much and so you feel really overwhelmed. It’s then hard to figure out how to focus on the things you love.”

Wanting to bring this sensation to the screen, the Daniels really do throw everything at you in their movie, from glitter bombs, to raccoon chefs, and trophies shaped like butt plugs.

Everything Everywhere All At Once is also reflective of how we consume media in another way, a response to a common trend in film discussion. 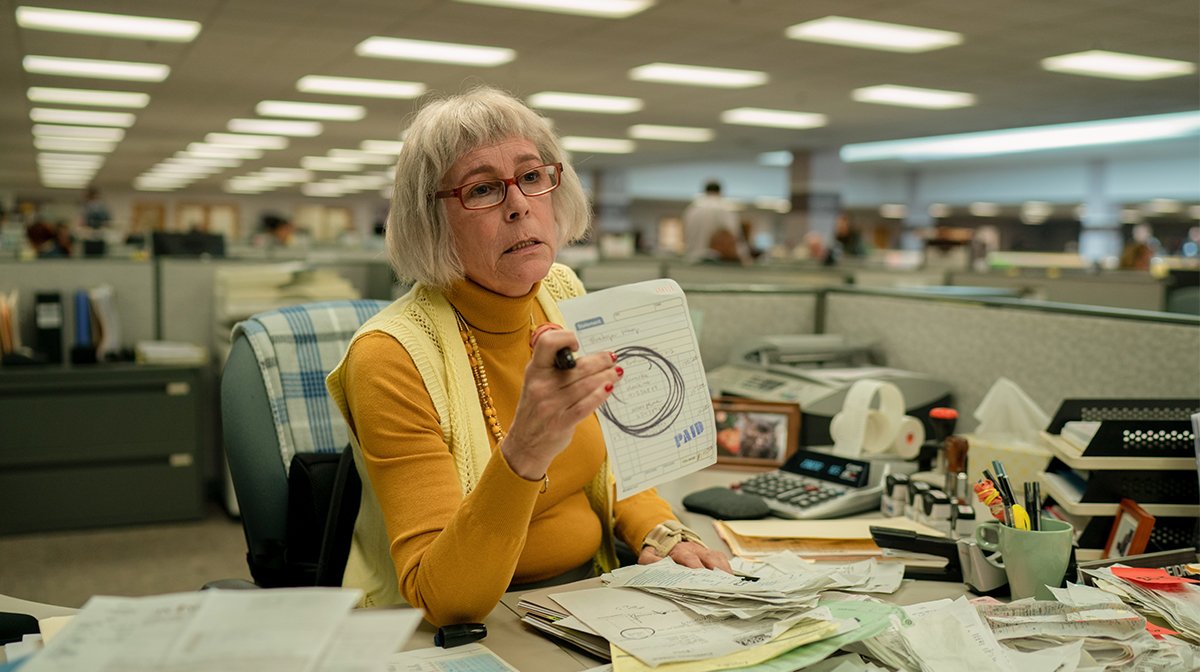 Being a multiverse adventure packed with fun references to the world of pop culture, the movie is a prime target for ‘Easter eggs you missed’ and ‘ending explained’ articles or videos – the type of content you often find dominating social media.

As Kwan tells us, whilst they knew this response would happen regardless, the directors aimed to push back against this trend: “That aspect is really interesting because it feels so outside the point of film in some way.

“Film has the power to transcend labels and boxes. It’s very much an experience, especially the first time you watch a movie. You can turn your intellectual brain off and just let it take over. 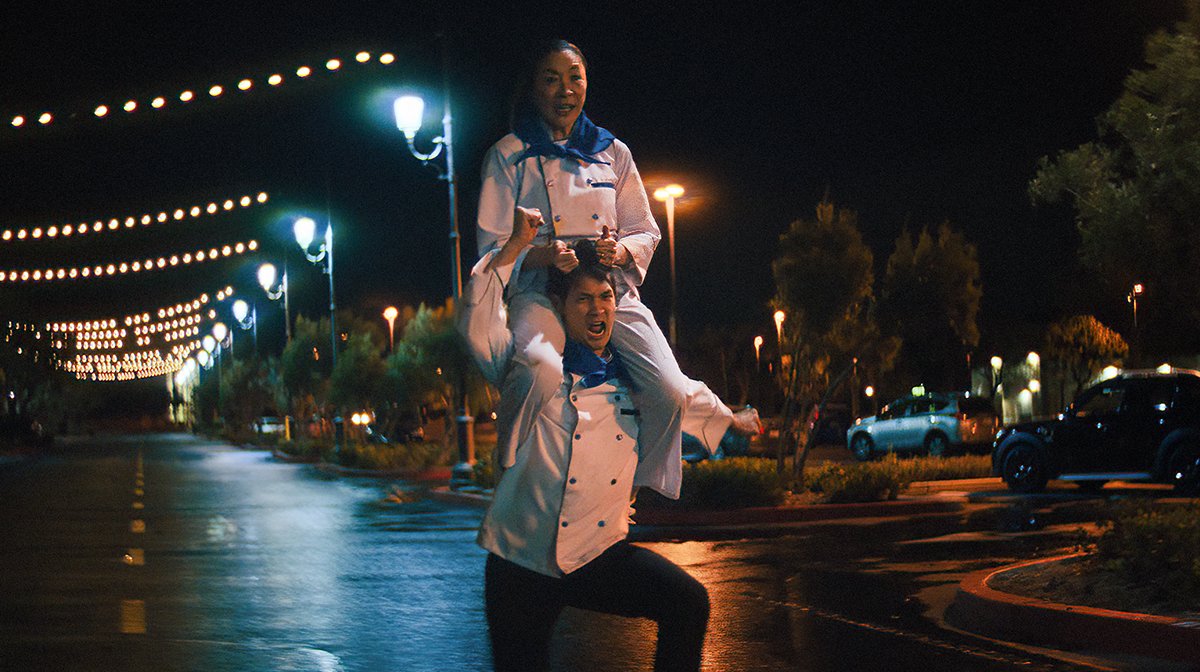 “I think nowadays people are so tuned into everything they are constantly analysing, breaking things down while watching a movie, which is actually kind of tragic because they don’t fully get to experience it.

“So, in some ways this film was an attempt to throw so much at the audience that there was no chance of them keeping up. In fact, the only way to enjoy this movie is to let go of the intellect and enjoy the experience.

“When you go home you can start thinking and picking it apart, but at least for that two hours you have a pure experience where you are not trying to label everything, put everything in a box, and make sense of it all.” 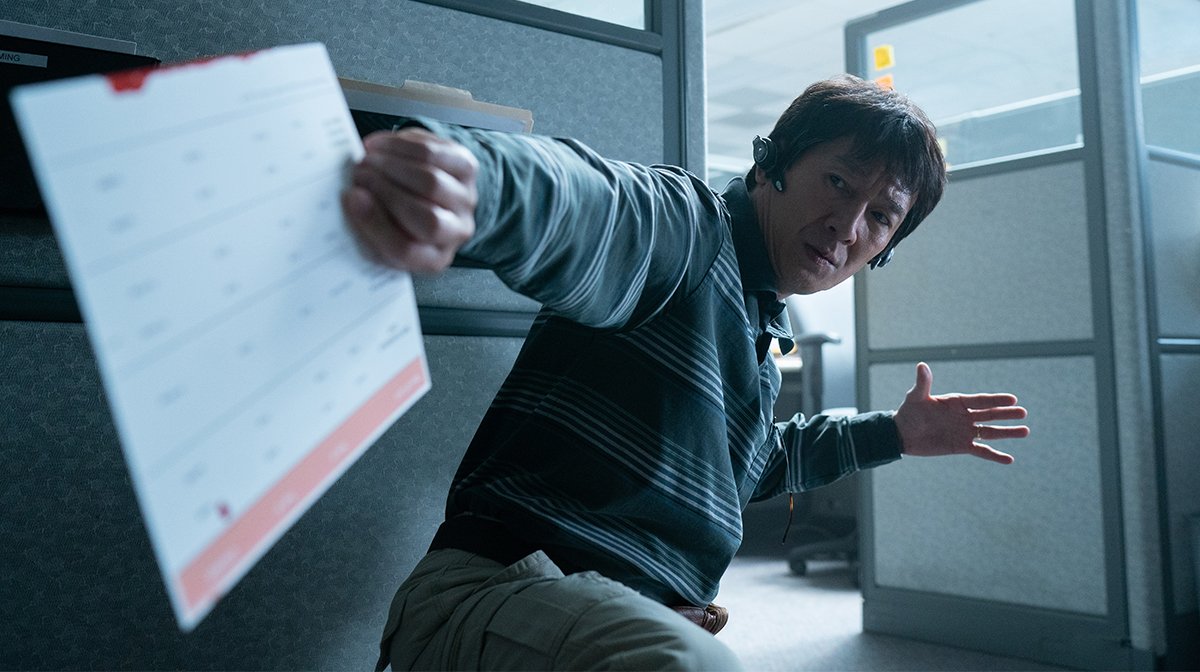 Scheinert chuckles, adding that audiences are picking up on references that the directors themselves didn’t even realise were there, saying: “We gave every department permission to have fun and do something they really wanted to do, so there’s things in the movie we didn’t even know about that we’re still discovering!”

For the stunt team, the fun thing they really wanted to do was choreographing a fight scene that involves jumping on trophies shaped like butt plugs – yes, you did read that right and it’s as wild as expected.

The story sees our hero Evelyn (played beautifully by Michelle Yeoh) having to connect with her other lives to save the world, travelling the multiverse by doing the least statistically improbable thing possible – hence the butt plug trophy scene. 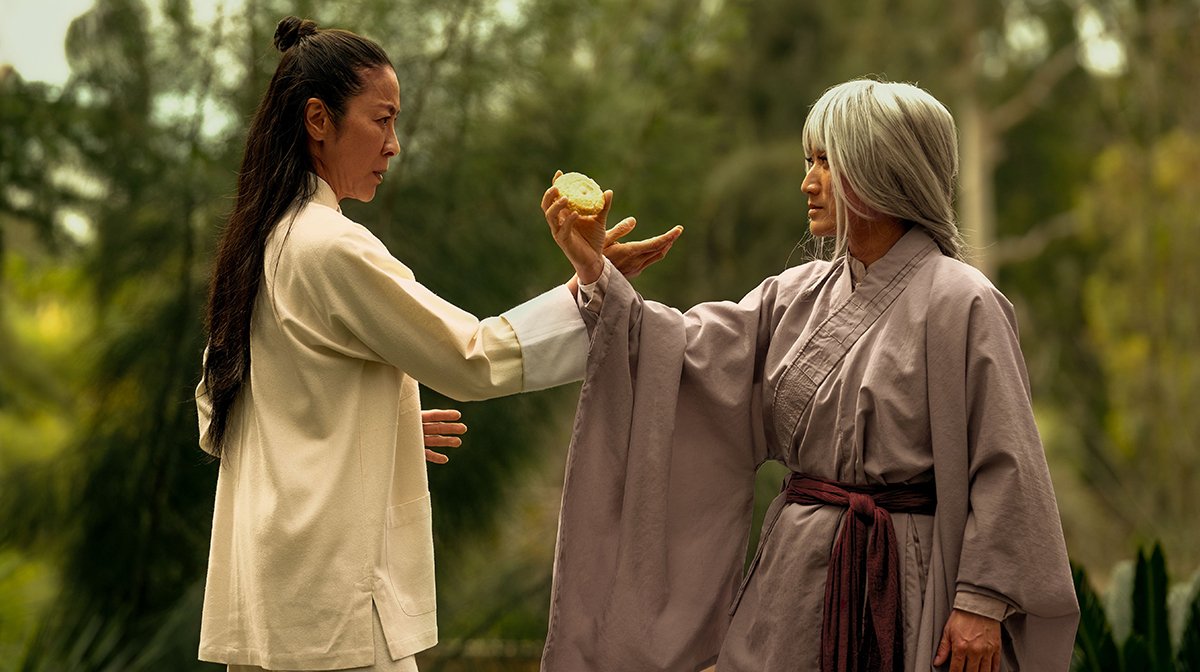 Kwan explains that to create these bizarre action scenes they had to “look outside the industry”, unable to find the right choreographers within Hollywood.

Searching online they came across the MartialClub, a group of YouTubers who bring traditional martial arts into the modern world. Scheinert says they not only brought their imagination to the fight sequences, but the anarchic energy required too:

“They are a bunch of guys in their 20s who live in Orange County, California. They had memorised all the fight scenes from the Hong Kong movies they loved – that’s how they learned their craft. 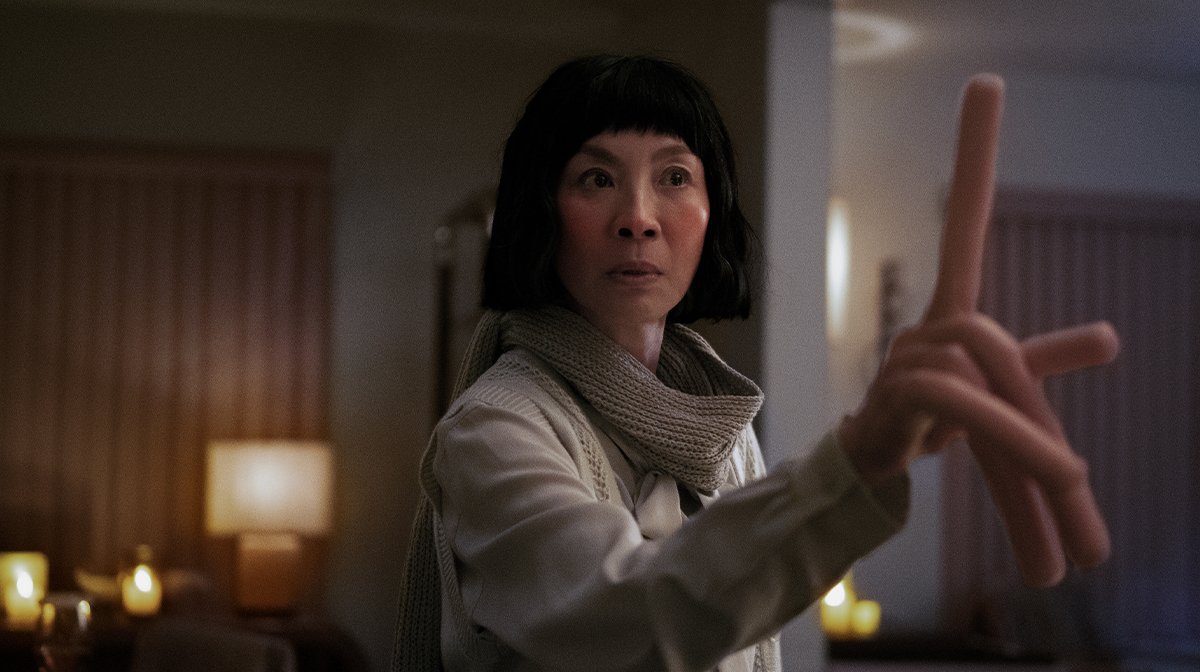 “They’re so hyper and funny. One of their friends would show up with a bag full of energy drinks, they’d be screaming ‘yeah’ and hug each other.

“But because of that sense of humour and how they memorised those movies, they understand the rhythm of that style of action.”

And yes, some members of the MartialClub do indeed make cameo appearances in the movie as the guys fighting over the trophy butt plugs. Now, there’s something for their IMDb pages! 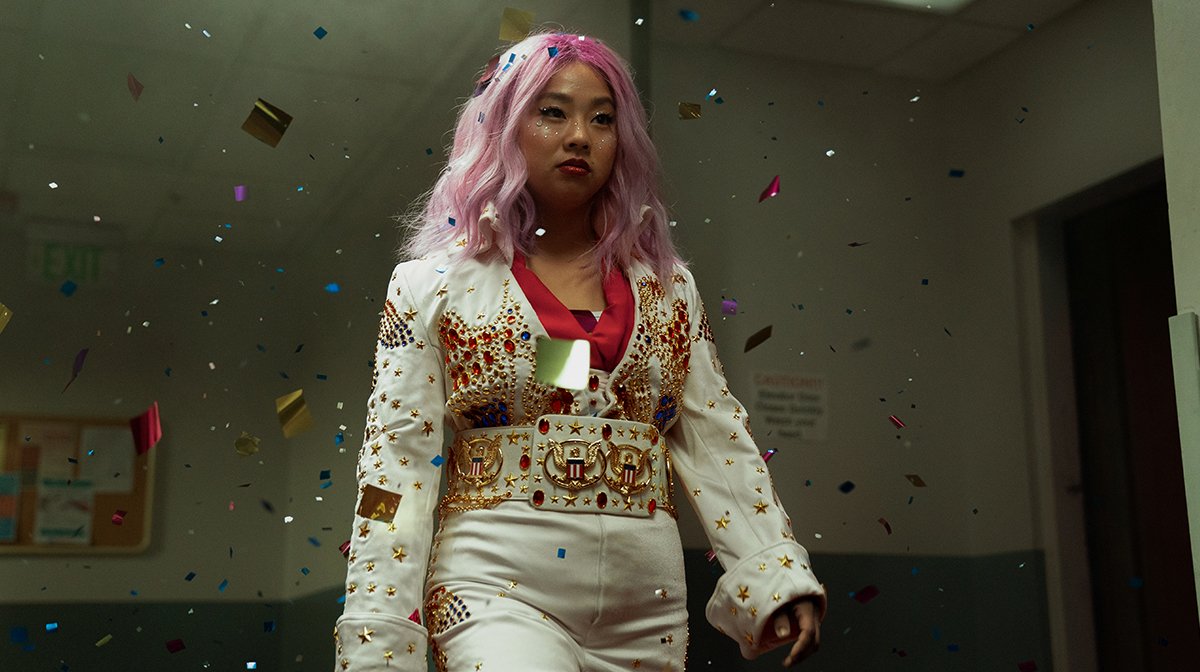 Whilst the fight scenes pay particular homage to Hong Kong movies, action cinema in general is a clear inspiration here. Kwan says they looked at how they could invert those genre tropes at every opportunity, such as the random methods used to travel the multiverse:

“I feel like all filming is problem solving. It’s almost mathematical. You can attack it in two different ways – what are some random fun things or what moment does this story need right now and how does that fit in?

“The paper cuts for instance, that was replicating a moment seen in action movies where the character has to reload their gun. Instead of having a gun I thought, what else can we do that feels like loading something up? Papercuts between fingers felt like a funny analogy. 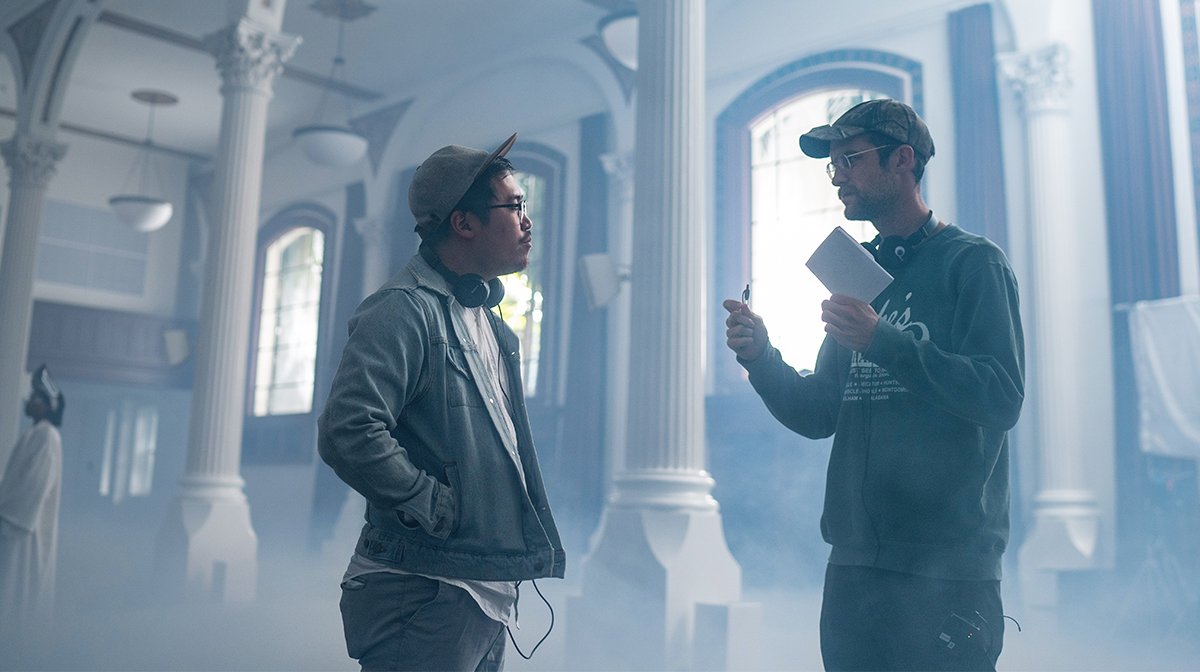 “Then there’s the trope of men fighting over guns, swords or whatever the weapon is. We asked, what is the dumbest version of that? Fighting over the butt trophies!

“It felt like putting puzzle pieces together. When things clicked we were usually laughing because it was really funny, but also if we took it seriously, it was going to be beautiful.”

Kwan neatly summarises there the odd tone of the movie – funny and beautiful. One moment you will be laughing at a universe where people have hot dogs as fingers, the next you will be sobbing into your sweater as the film delivers its poignant musings on love. 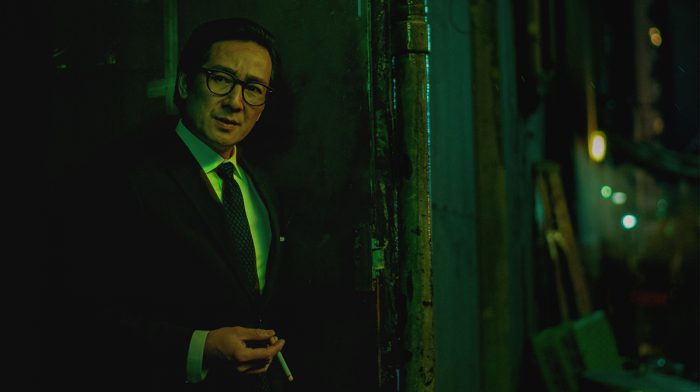 It certainly leaves you with plenty to think about, in regards to life and the multiverse. What small moments changed our journeys? If we had made other choices, how different will our lives have been?

The fact that Everything Everywhere All At Once challenges audiences to ask these big questions isn’t lost on the filmmakers, nor is the irony that two guys named Daniel made a multiverse movie.

Kwan laughs, saying this may influence their next project: “We think a lot about nominal predestination – that your name predicts your outcome or pushes you in a direction. Would we have made films together if we weren’t both called Daniel? 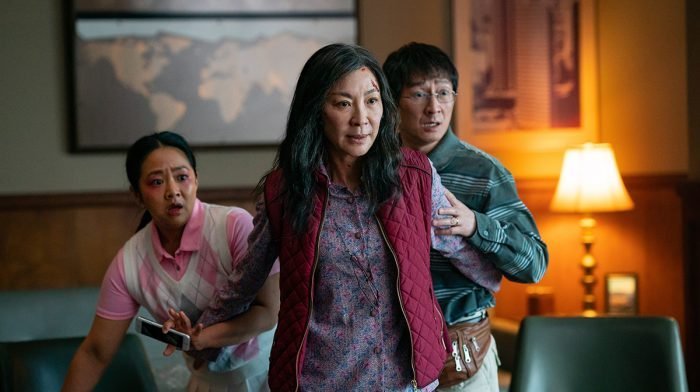 “So we want to create a podcast where every episode you take ten people from around the world with the exact same name. Maybe you can help us – you can meet other Emily Murrays from around the world, sit down together with no context, no questions, just talk – see what happens.

“We could do this with Harry Potter, or Jonah Hill, or whatever. I think there might be something in the name of Donald Trump!”

Whatever is next for the Daniels, podcast or other project, I’ll be right there with them.

Everything Everywhere All At Once is out now in UK cinemas.

Everything Everywhere All At Once Michelle Yeoh