Each year the Super Bowl brings us exciting new trailers for upcoming films and television shows, making it an event not to miss for pop culture fans.

And sure enough last night saw the first trailer for Amazon’s series The Lord Of The Rings: The Rings Of Power, a new glimpse at Moon Knight and, perhaps most intriguingly, the second teaser for Doctor Strange In The Multiverse Of Madness.

You can watch it here:

Now, when we say that there is A LOT going on in this trailer, we really mean that as quite frankly it looks absolutely brilliantly ridiculous teasing everything from Patrick Stewart’s return as Professor X to the debut of the Illuminati in the Marvel Cinematic Universe (MCU).

We break it all down, scene by scene, looking at what we can learn about the film from the many hints in the trailer. 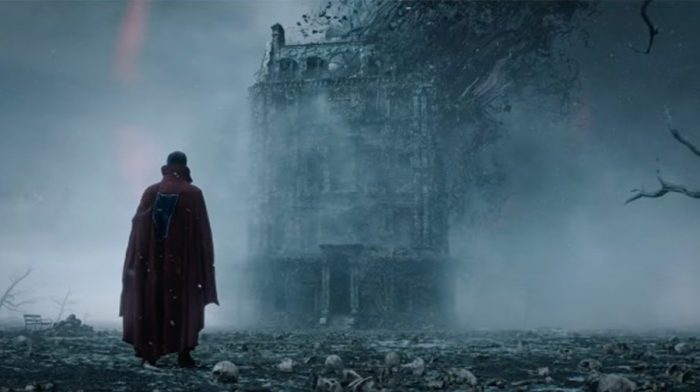 The opening of the trailer is immediately haunting, as we see Doctor Strange (Benedict Cumberbatch) approach a seemingly abandoned Sanctum Sanctorum that is surrounded by the remains of skeletons.

We shouldn’t be surprised that this trailer is unnerving as the sequel is billed as Marvel’s first horror film, and is directed by an iconic filmmaker of that genre, Sam Raimi, who brought us the likes of The Evil Dead.

Strange’s narration tells us that every night he dreams the same dream, which presumably is this sequence which includes brief glimpses of a battle at Kamar-Taj (home to the Masters Of The Mystic Arts).

America Chavez vs. A Nightmare 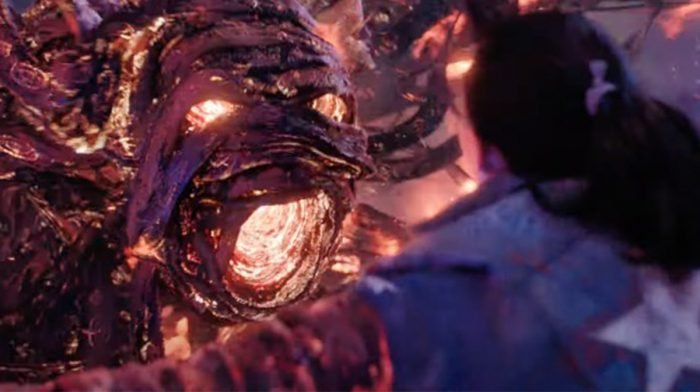 Within this sequence we are introduced to America Chavez, a new hero who will be portrayed by Xochitl Gomez and possesses powers such as the ability to travel through the multiverse – handy!

We see Chavez being restrained by a monster with a glowing face, presumably a multiversal demon that will cause some havoc, maybe one relating to Nightmare?

There is indeed the question of whether the villain of the piece will be Nightmare, with this opening sequence being an insight into the Nightmare Dimension.

Strange does later say “the nightmare beings” in the voiceover, and it’s a well known fact that the film’s original director Scott Derrickson wanted to feature the popular villain.

The official synopsis says that Strange will face off against “a mysterious new adversary”, so could that be Nightmare? Or are the teases red herrings? 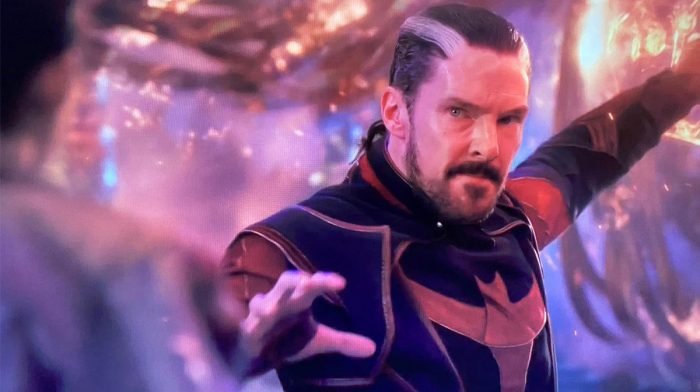 Before Doctor Strange wakes up from this nightmare, we get a blink-and-you’ll-miss-it look at the hero in his Defenders outfit, a popular costume from the comic books.

It’s unclear whether this is our Strange or another version from the multiverse – the fresh haircut suggests the latter.

A TV spot that was also released during Super Bowl night featured a better look at Defender Strange, who appears to be aiding in the battle. 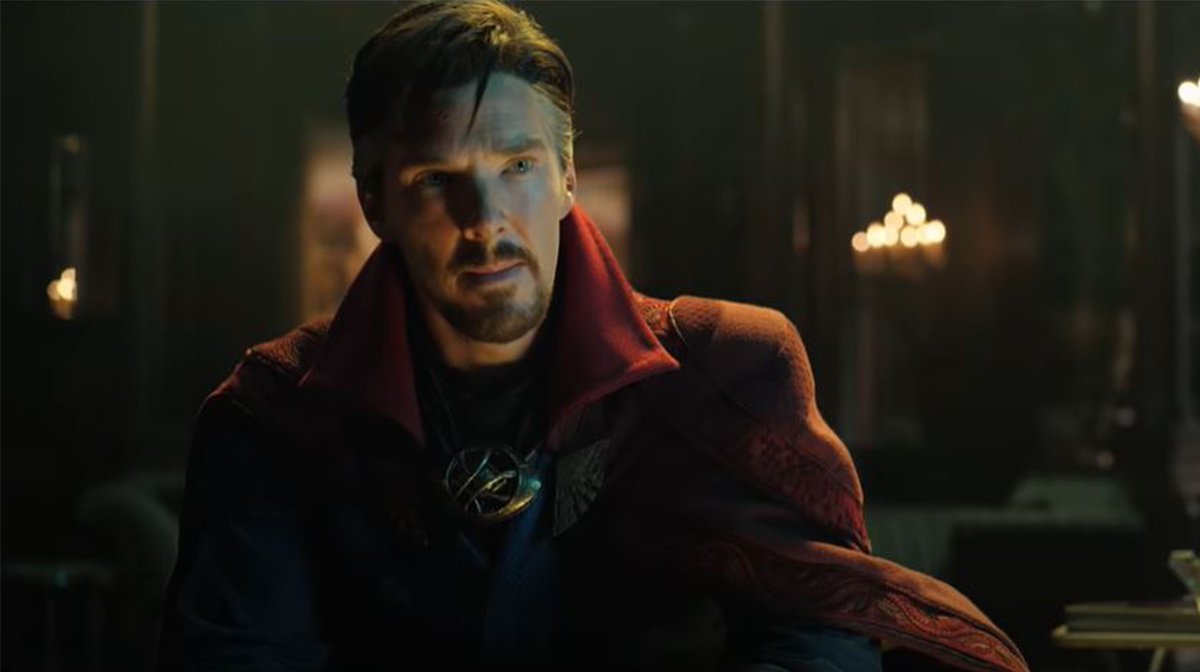 Actions have consequences – that’s something this trailer makes very clear as it emphasises Multiverse Of Madness will explore how the events of Spider-Man: No Way Home have impacted the universe.

Whilst the conclusion of that film seemingly saw Strange repair the torn fabric of reality, not all is fixed as Wong warns him: “You cannot control everything Strange, you opened the doorway between universes, and we don’t know who or what will walk through it.”

The question is then – what other dangers slipped through? 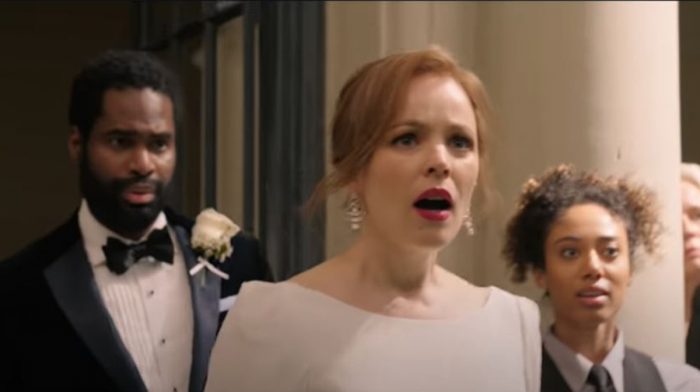 This film sees the return of Rachel McAdams as Dr. Christine Palmer, Strange’s love interest from the first movie.

Here she is getting married, but Strange isn’t the groom – he did get snapped by Thanos, so it’s likely Palmer moved on during that time.

The wedding is disrupted as we see Palmer and the guests rush out looking shocked, staring ahead at something – maybe some monsters have arrived to crash the nuptials?

Wanda Maximoff (Elizabeth Olsen) features heavily in this trailer, with us first seeing her sporting the striking Scarlet Witch look surrounded by candles.

The teaser then cuts to Wanda and Strange chatting about the multiverse in a field, a scene we also saw in the initial trailer for Multiverse Of Madness.

Strange appears to have gone to Wanda for guidance, asking what she knows about the multiverse. Her reply is rather foreshadowing: “Vis had his theories, he believed it was dangerous.” 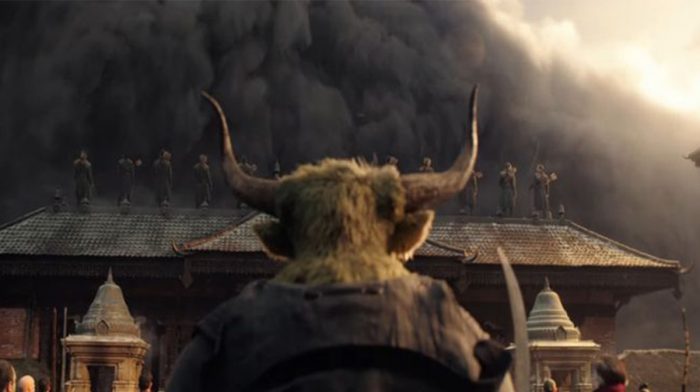 The trailer then returns to Kamar-Taj, where the Masters Of The Mystic Arts are assembling to prepare for battle against an ominous, approaching black cloud.

One of these characters is Rintrah, a Minotaur-like character from the comics who briefly served as Strange’s apprentice and comes from another reality. 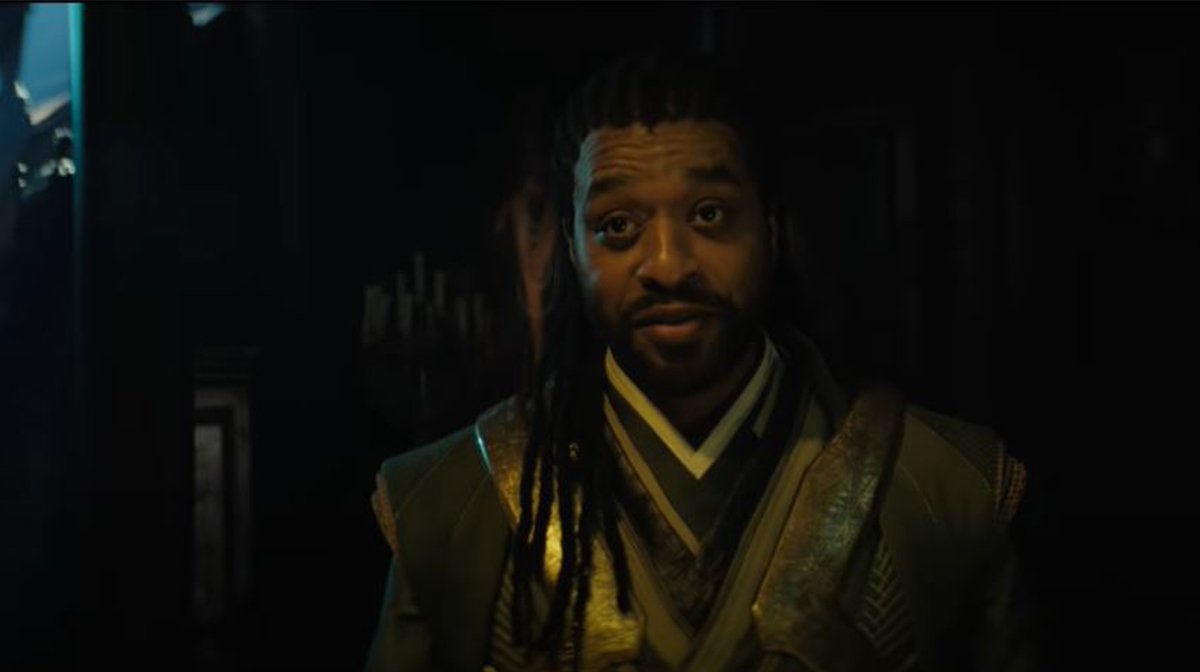 We are also reunited with Karl Mordo (Chiwetel Ejiofor) in this trailer, once friend to Strange but now perhaps an enemy – it’s important to remember that the first film’s post-credits scene sets up the former ally as a potential antagonist.

He tells Strange, “I’m sorry, Stephen, your desecration of reality will not go unpunished”, with the trailer than cutting to a shot of our hero in handcuffs. 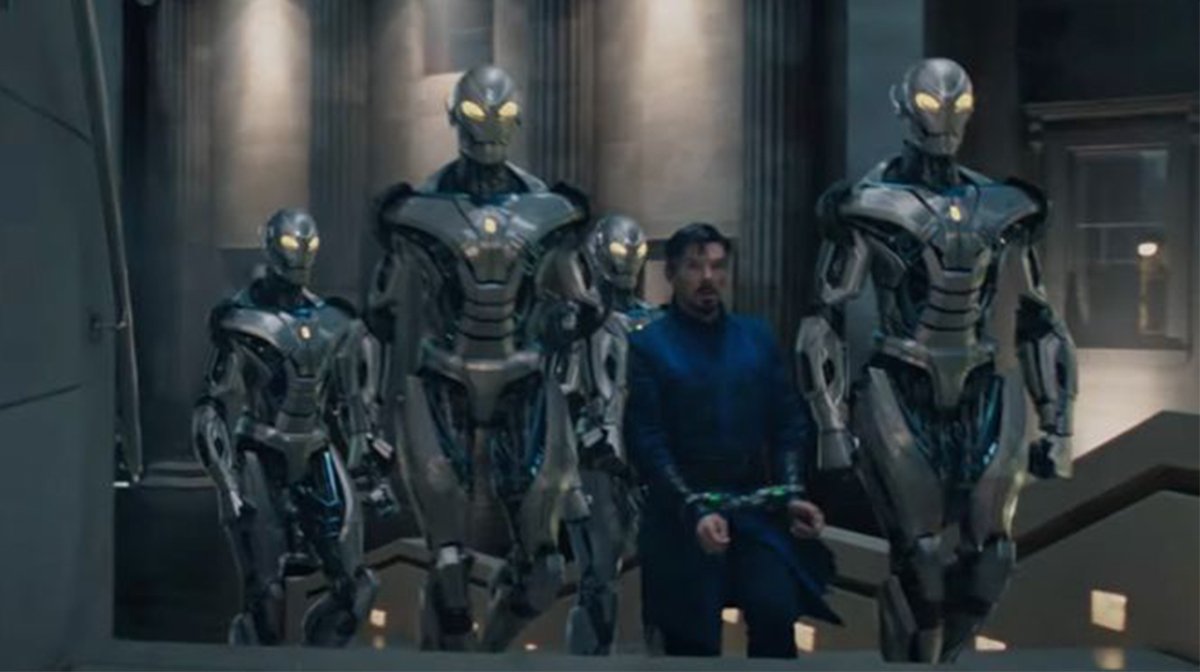 Strange’s actions in No Way Home seem to have landed him in trouble, as we see our handcuffed hero being escorted through a futuristic looking building.

It appears that Strange is standing trial for his crimes, with a mysterious organisation investigating the case – it’s worth noting that it doesn’t seem to be the Time Variance Authority (TVA) from last year’s Loki, although they do monitor multiversal threats.

Something else worth noting here is that the guards resemble Ultron or Iron Man drones. They could perhaps have been reprogrammed following Age Of Ultron or are from another universe. 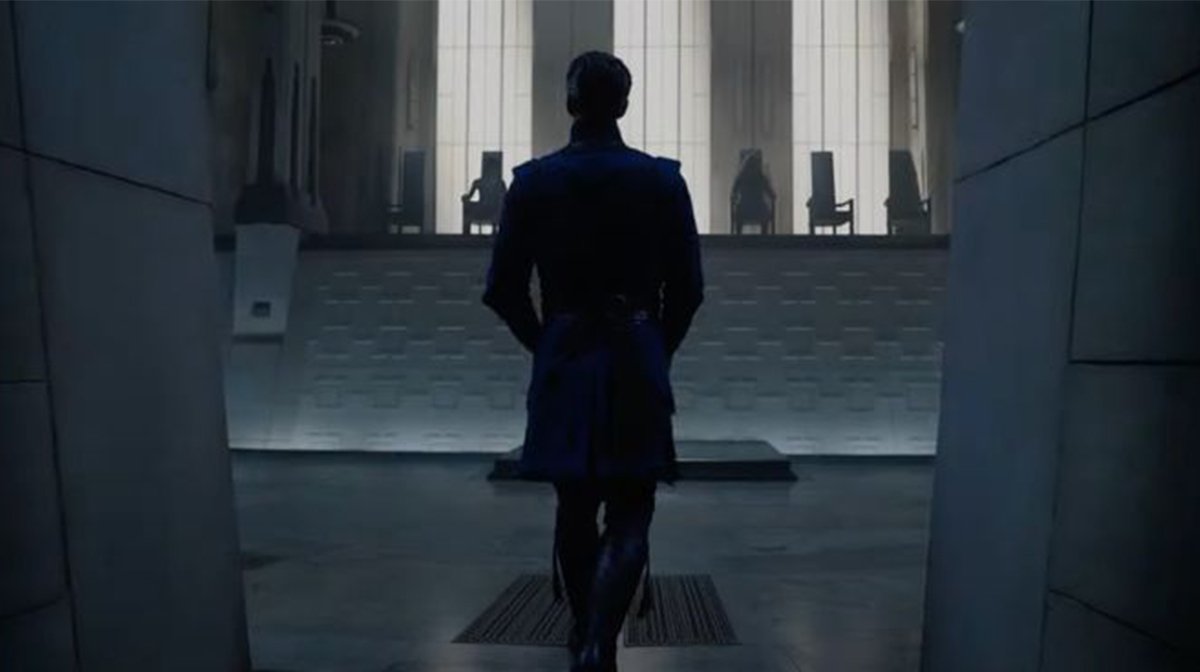 It looks like the long rumoured debut of the Illuminati in the MCU has now arrived, with this trailer teasing their appearance as Strange enters what looks to be a throne room.

In the comics, the Illuminati are a secret society of Marvel heroes who work behind the scenes, collectively protecting the universe (or maybe here, the multiverse).

The line-up regularly changes, but two of the original members are Doctor Strange and Professor X… 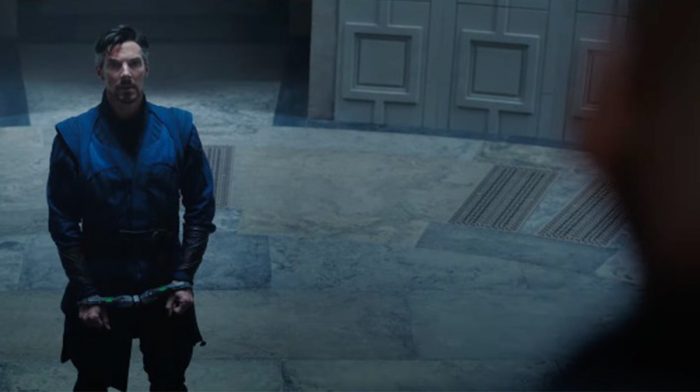 Talking of Professor X, easily one of the most exciting moments of the trailer heavily hints at the return of Patrick Stewart in the role – that voice telling Strange “we should tell him the truth” is unmistakable.

We have been aware for a while that the X-Men will soon be seen in the MCU, but it has been unclear whether existing characters will be drawn in from Fox’s movies via the multiverse opening up.

Stewart’s return seemingly confirms this, hinting that others could also reprise their roles – Hugh Jackman as Wolverine for example. Our bet is that returning characters will be joined by new iterations of other mutants too. 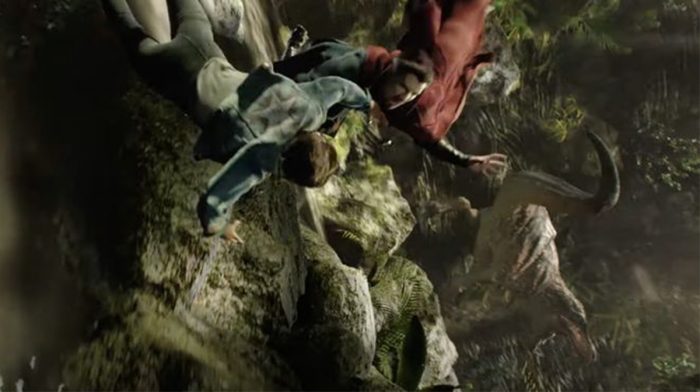 There is the suggestion that Strange will also travel through time as well as the multiverse, as we see him and Chavez falling through a land featuring dinosaurs. That’s right – dinosaurs!

Strange and Chavez then crash through the Mirror Dimension, a journey that doesn’t look fun as the pair scream as they fall apart into pieces. Trippy. 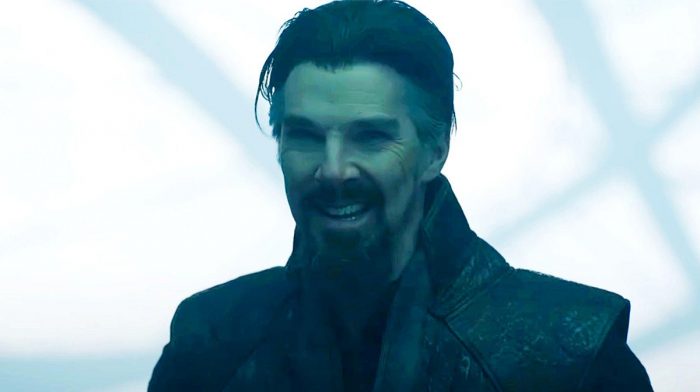 The first trailer for Multiverse Of Madness showed us a cackling doppelganger of Strange, presumably the villainous variant of the character from last year’s animated series What If…? – known as Strange Supreme.

It might not be though as Strange Supreme redeemed himself in the season finale of that show, and this variant here definitely intends trouble, hinting then it could be someone else.

We get a closer look at the face-off between the duo which will sure make for an exciting scene – “things just got out of hand”. 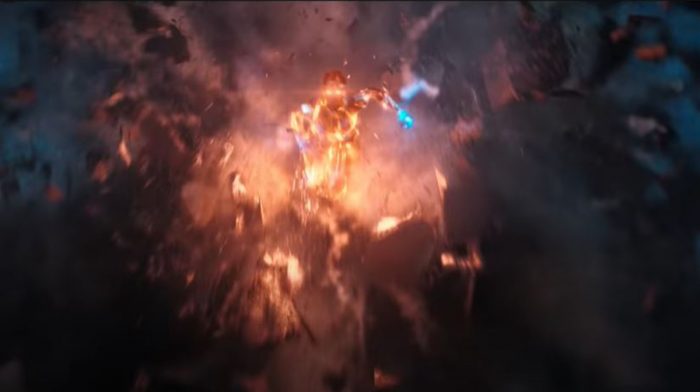 In another blink-and-you’ll-miss-it shot, we see a glowing human figure blasting through a plane of reality probably in the heat of a battle.

But who is it? Whilst some fans hope that it is the Human Torch, a.k.a. Johnny Storm, a key member of the Fantastic Four, our bet is that it is a variant of Monica Rambeau (Teyonah Parris) donning a Captain Marvel look.

Then again, with the Multiverse Of Madness it seems anything is possible…

Whoever it is, they are fighting against Wanda, a battle that will definitely cause plenty of chaos as both figures are very powerful. 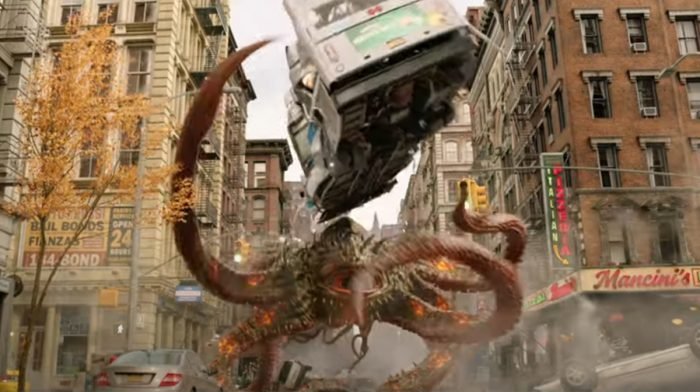 This trailer delivers a closer look at a character previously teased, Shuma-Gorath, a tentacled monster that throws a bus at Chavez and Strange.

In the comics he is an extradimensional creature most associated with Strange, presumably arriving here from another reality. 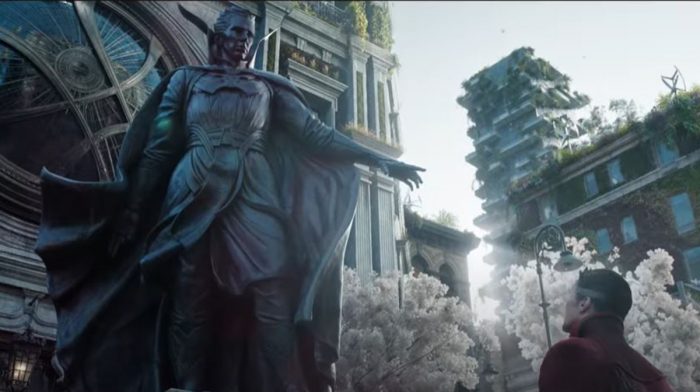 We see Strange gazing at a statue of himself outside the Sanctum Sanctorum, surrounded by blossoming trees.

He could be visiting another universe here, or maybe the future of ours following his death, with this statue being a memorial to the fallen hero.

It indicates that Strange will be remembered as just that, a hero, despite his recklessness. Something that seems to be getting on the nerves of Wanda as another sequence indicates… 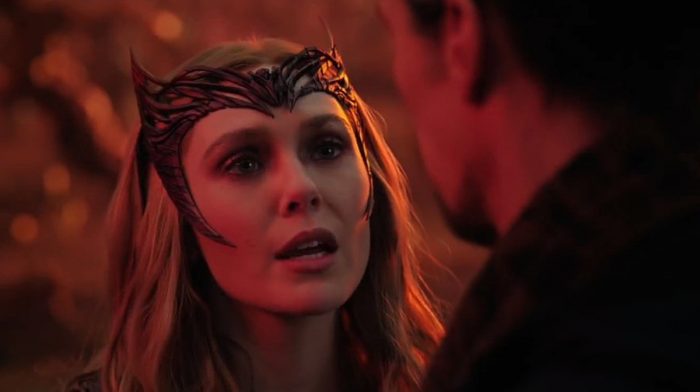 Undoubtedly another highlight of the trailer sees Wanda deliver some hard facts to Strange: “You break the rules and become a hero. I do it, I become the enemy. That doesn’t seem fair.”

Our girl seems p*ssed off, hinting at something regularly teased in the MCU – Wanda will be entering her villain era.

A Return To Westview 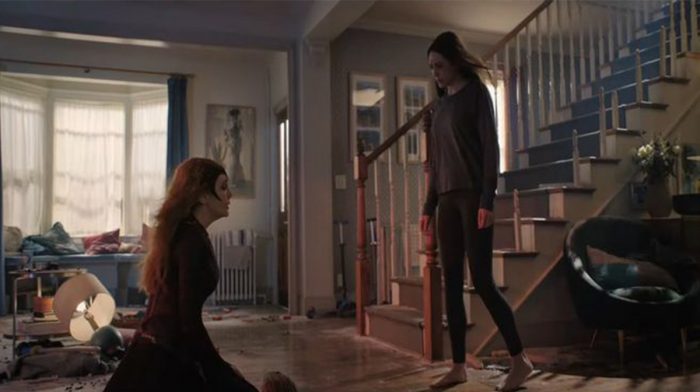 Multiverse Of Madness will see us return to Westview, the town Wanda took hostage in WandaVision, making it her and Vision’s home.

Clearly Wanda is still grieving and thinking of that place, approaching what seems to be an astral projection of herself as a tearful Scarlet Witch.

The duo share a moment, implying that Wanda has nobody for comfort other than herself. 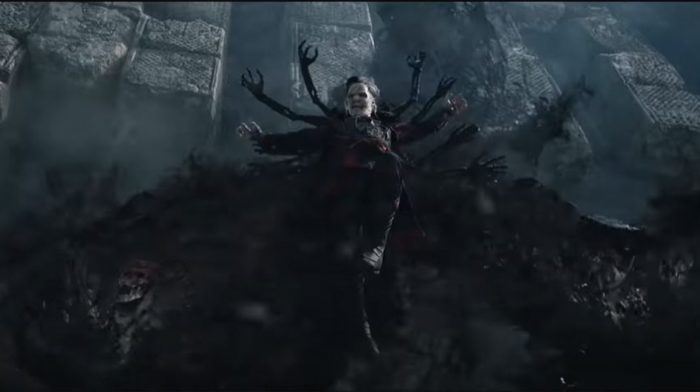 The trailer ends with a fast-paced montage of action scenes, within which appears to be glimpses at a zombified Wanda and Strange.

It’s unclear what exactly is happening, but we see Wanda covered in blood with a large crack down her face, whilst Strange is sprouting many arms.

There’s more than just a hint of the undead here, especially since the TV spot released alongside the trailer shows a clearer look at zombie Strange.

Are they zombie variants, or has something gone horrifically wrong resulting in the transformation? Only time will tell. 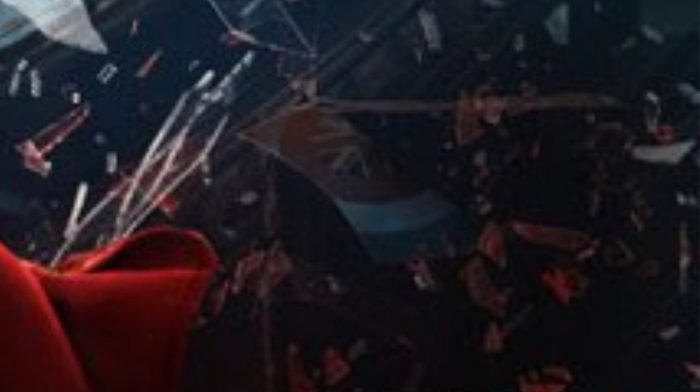 It wasn’t just the trailer that was full of Easter eggs, as the newly released poster for the film featured some too – get ready to yell ‘computer, enhance’.

Hidden within the poster appears to be a shard of Captain Carter’s shield, hinting that Multiverse Of Madness might feature the live-action debut of the beloved character, welcoming back actor Hayley Atwell.

The multiverse variant of Peggy Carter, which saw her receiving the Super Soldier Serum instead of Steve Rogers, was a hit in animated series What If…?, so we wouldn’t be surprised to see her appearing in other MCU projects.

Doctor Strange In The Multiverse Of Madness will be unleashed in UK cinemas on 6th May.