Nobody involved with Bob’s Burgers ever thought it would make the transition to the big screen – least of all its creator, Loren Bouchard.

“In the early stages of the show, we were just glad to be getting picked up for a new season”, he told Zavvi. “It was all about that fight back then, we couldn’t look further down the field.

“It was only when we got a little deeper into our run when the question arose – and it was never from us, it was the fans who were asking. Even then we couldn’t have imagined a Bob’s Burgers movie, but it kept coming up more and more.

“The big challenge was creating something that could stand on its own if Bob’s Burgers got wiped off the face of the earth. We have such a little show, so it had to stand the test of time outside of it.” 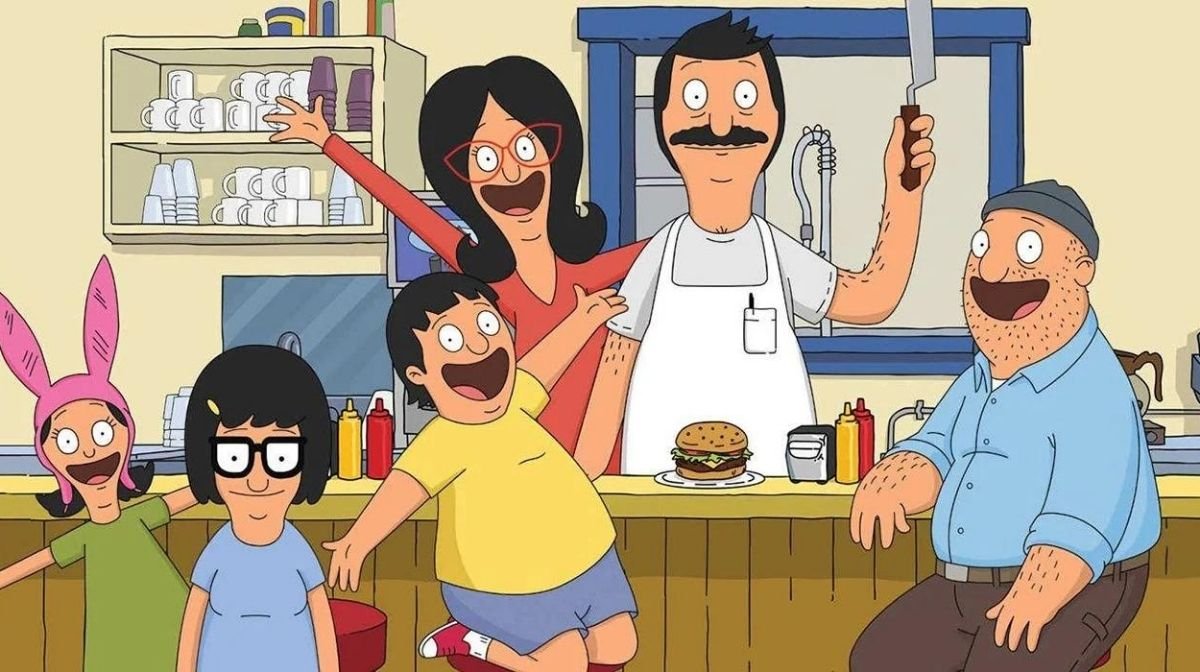 This week fans will finally see the release of The Bob’s Burgers Movie, co-directed by Bouchard and veteran animator Bernard Derriman.

With the series having aired 238 episodes across twelve seasons since it premiered in January 2011, finding the right story for the film was a challenge.

Which is something co-writer Nora Smith acknowledges, explaining that in the writers’ room several ideas for episodes were put to one side as they could have equally made sense as a feature length story.

But there was one thing never in question, as Bouchard explains: “We knew right away that we wanted to do a mystery – the kind of story you couldn’t do as well on TV because it’s a little more cinematic. Plus, it’s one of our favourite genres! 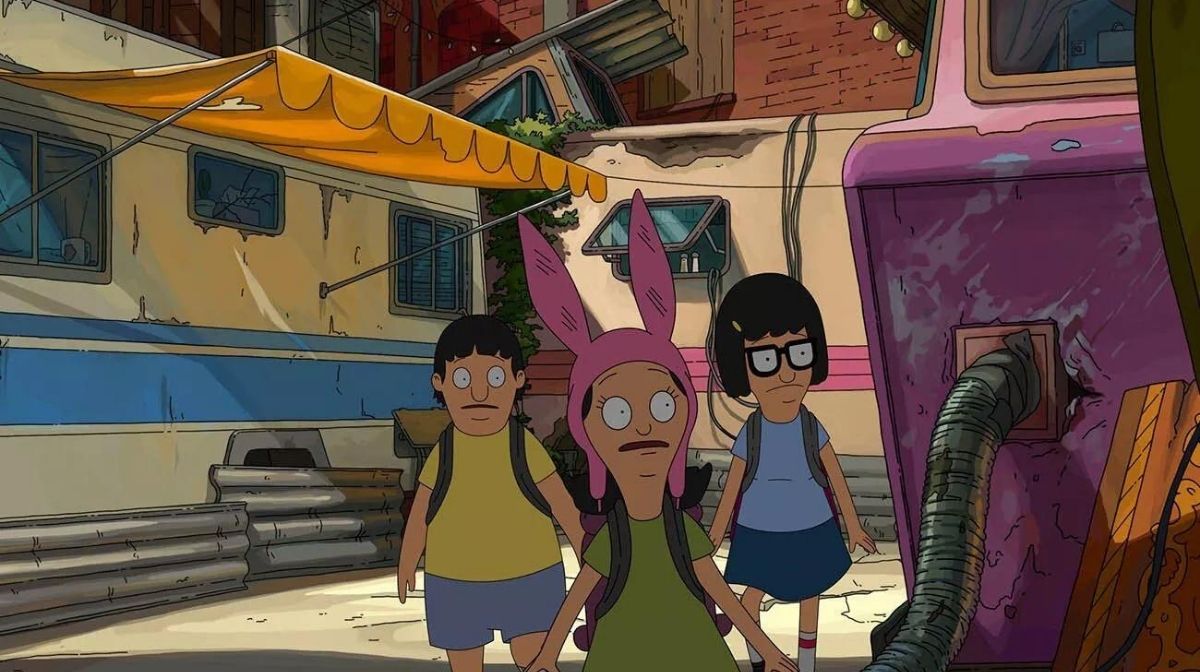 “I also knew that I wanted to tell a story about the town, where we go deeper into exploring its surroundings. There are so many places within this world we haven’t seen yet – we didn’t want the usual movie adaptation of a TV show where they’d go on holiday to France or into space!”

The mystery is triggered by a sinkhole opening in front of the restaurant, blocking Bob’s (H. Jon Benjamin) hopes for a successful summer that can help pay back their debts.

In the sinkhole, children Louise (Kristen Schaal), Tina (Dan Mintz), and Gene (Eugene Mirman) discover a body – the identity of which puts them at the centre of their own murder mystery investigation, with findings that could potentially save the restaurant. 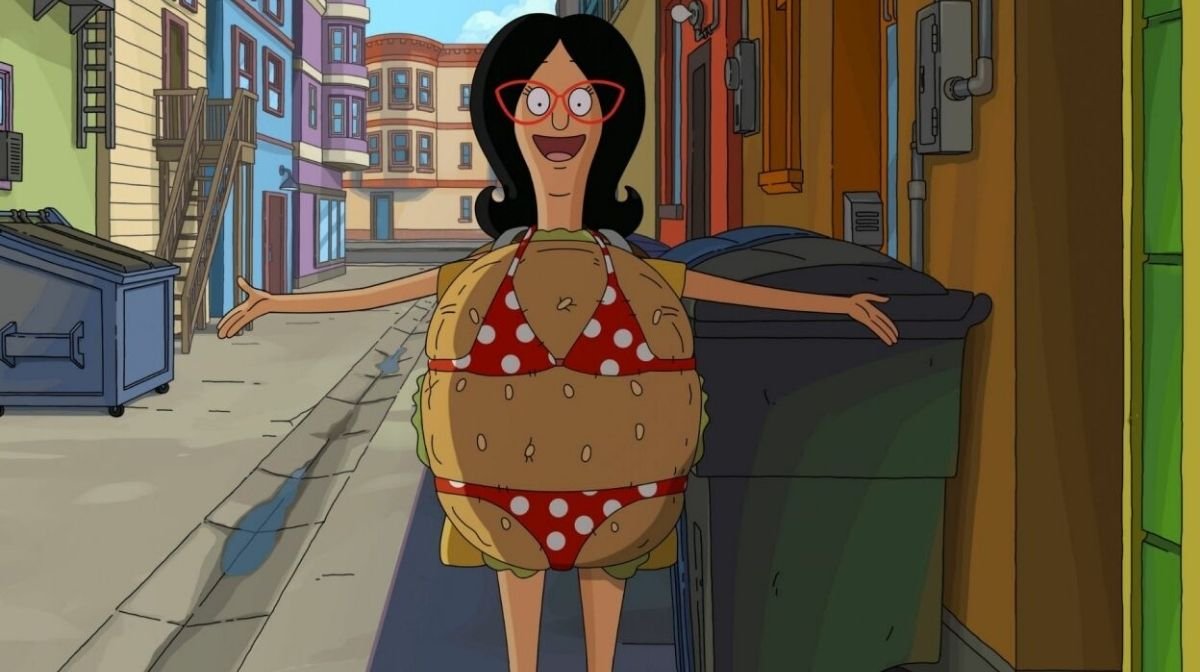 For a series driven by character over narrative, the show’s transition to the big screen is testament to just how much the Belcher family have resonated with audiences over the past decade.

The Belchers may be eccentric, but they have their roots in the writers’ real families. John Roberts, who voices matriarch Linda, explains:

“We have a lot of really amazing female writers on the show, who drew from their mums and then themselves, as many of them have kids now. It’s why Linda is one of the best mums on TV, in terms of how cool it is – their contributions really help shape that character.” 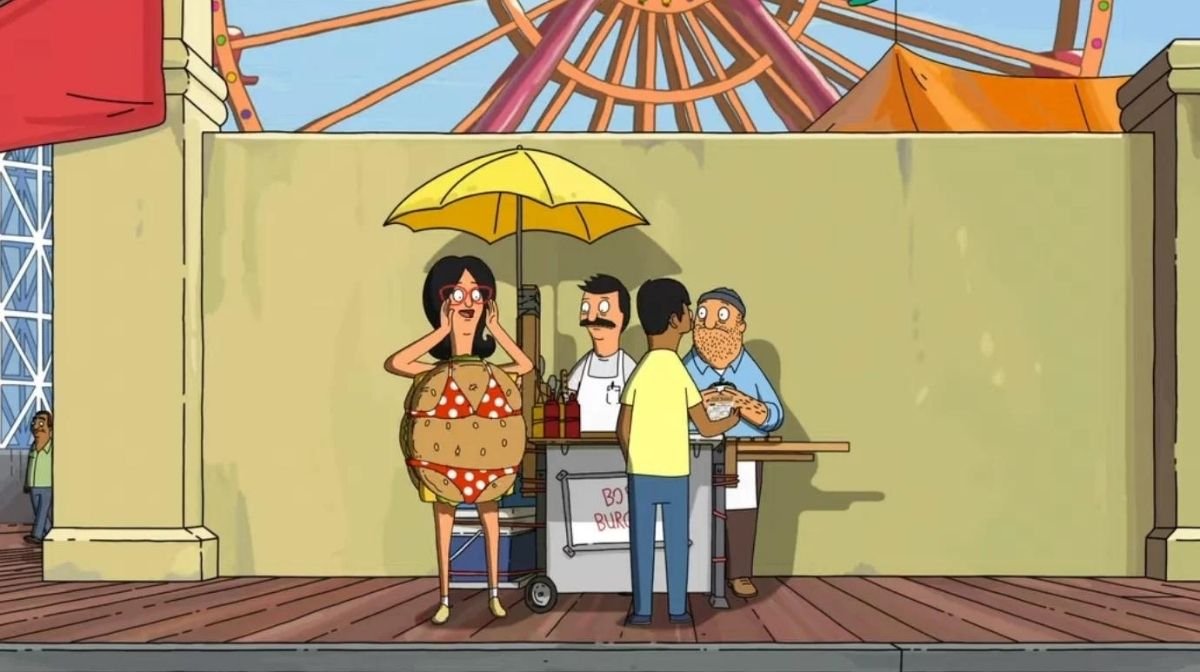 H. Jon Benjamin, who voices Bob, has found that over the past years voicing the character has made the actor become increasingly like him.

“I’m like Bob in that I’m getting more and more tired all the time. But I think the main reason the show continues to resonate for me is how loving they are – sure, they’re eccentric, but they’re very supportive of each other.

“Linda and Bob are very good parents in a weird way, and the kids are all interesting and funny. They’re the most authentic family on TV!”

There were nerves when the project was announced from some of the cast, as they wondered if they would struggle to maintain what makes the show so special on the big screen. 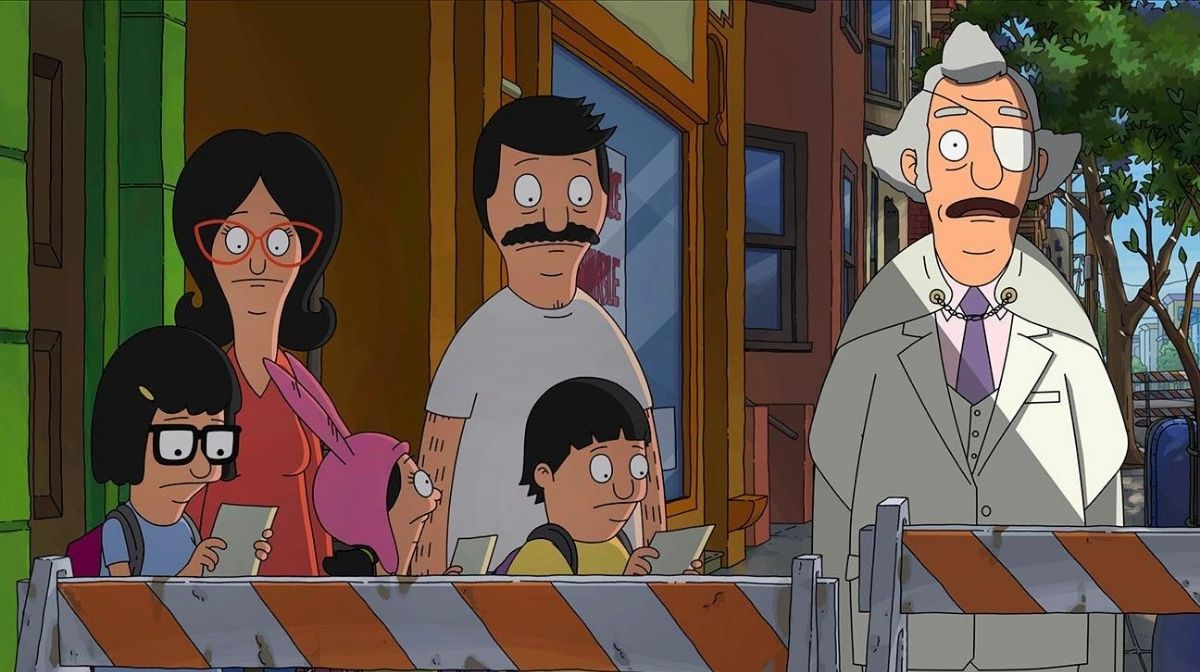 Mintz stated: “This was something I was definitely concerned about, but they managed to find the right level of stakes, which is usually the problem when you make a movie out of a TV show.

“There’s a pressure to make the adventure too big and forget what made it special. This remains grounded in this world Loren created.”

Other cast members still can’t quite believe they are involved in a major movie, with Mirman telling Zavvi: “It didn’t feel real until I saw a movie a few months ago in the theater, and there was a trailer for Bob’s Burgers before it.

“It was surreal hearing my voice there – I screamed and ran away of course, there were only two other people there and they were both deeply unnerved.” 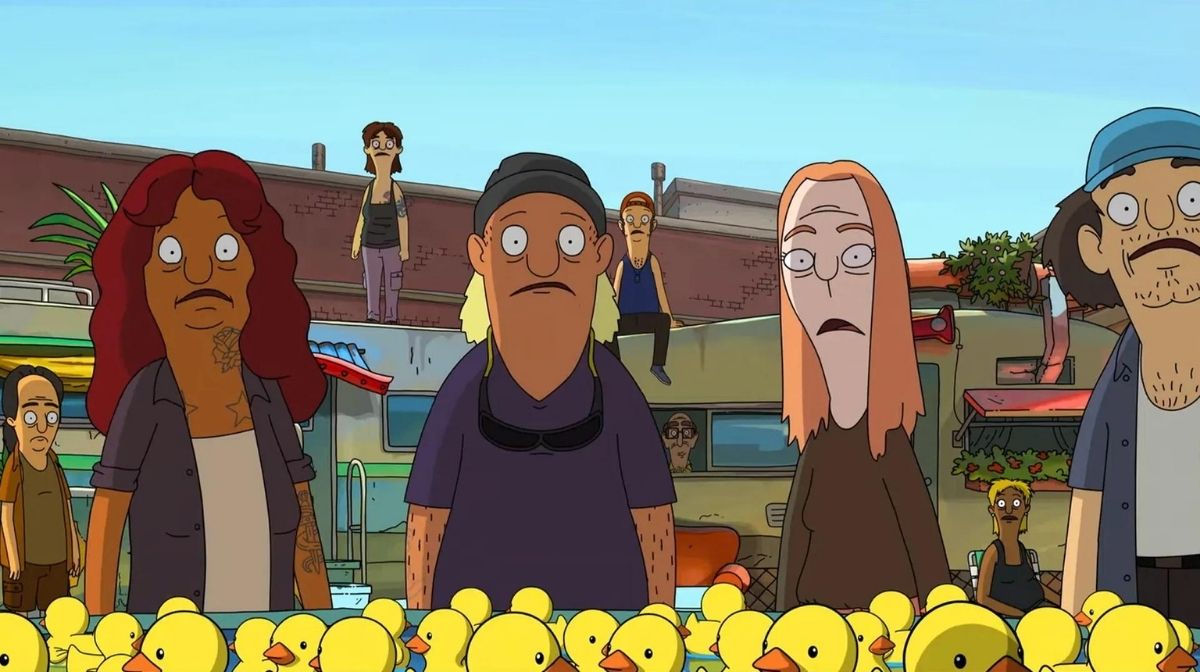 Fans of the series will know that the original songs are standouts, with multiple soundtrack albums released to date. And so, this film is billed as a full-blown movie musical, but like all things in the Bob’s Burgers universe, it’s still grounded in the everyday.

“One thing that struck me was the intricate choreography of the dance numbers”, Mintz continued. “Nora would film herself dancing and send it to the animators, so the characters would all be doing moves realistic to them.”

“We were never asked to share our moves though”, Mirman added, “which is a shame as I’ve been sending videos of my dancing to the writers for years!” 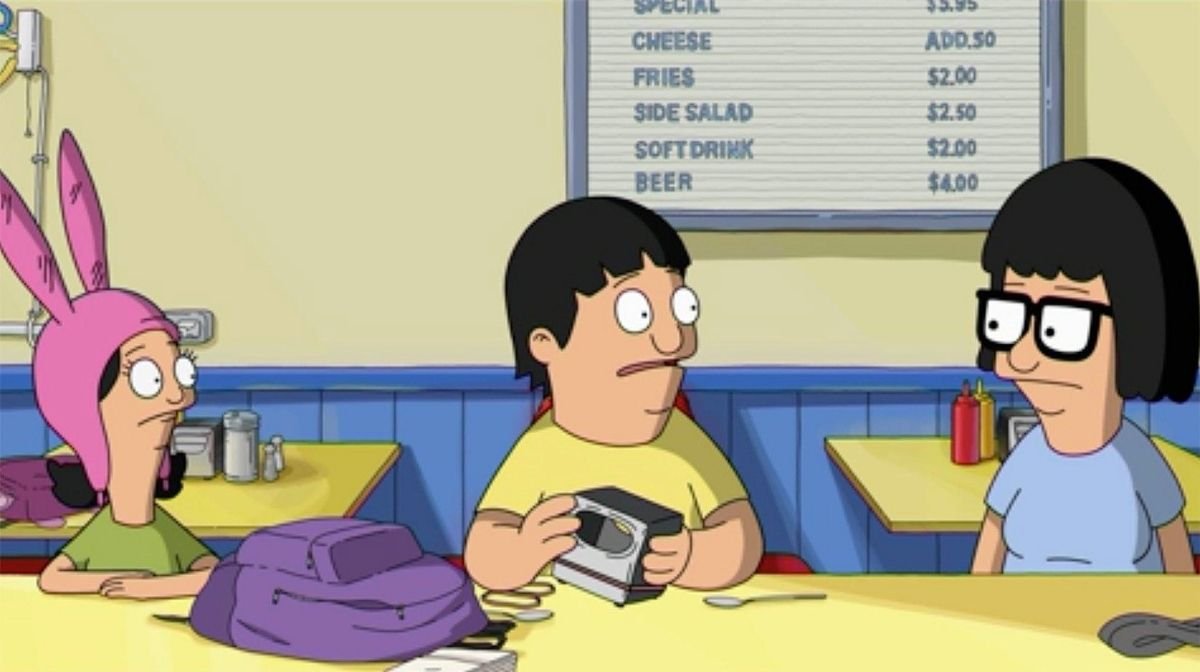 The Bob’s Burgers Movie is also a major milestone in being the first 2D animated feature to be released by a major Hollywood studio in several years. Disney’s last one was The Princess And The Frog, all the way back in 2009.

Roberts highlights that the film pays tribute to the studio’s lineage of animation: “The animation is gorgeous and it’s got so many ties to the old Disney stuff. There are pink elephants in there, references to Fantasia – it’s a real Disney film!”

Bouchard hopes that the film not only introduces new audiences to Bob’s Burgers, but also ushers in a renaissance of hand-drawn animation on the big screen.

“I think 2D animation is an absolutely incredible medium and there’s no reason why it should be just on TV and not in theaters – every frame is a little work of art.

“I hope that, regardless of our movie, there’s a renaissance because I love taking my kids to see animated movies and I’d love to see something beautiful in this medium.”

When Bouchard created the show more than a decade ago, he claimed that he wanted to make a series about “blue collar creatives” – the type of working-class family rarely depicted on TV.

Now that the Belchers are on the big screen, does he similarly feel they’re like no other characters we’re likely to see?

“It doesn’t feel to me like we see working class characters like these quite enough. It’s nice to tell these stories, because everybody has a creative side and that creativity is expressed in a lot of weird ways by human beings.

“We’re a very strange group and it’s something I remain absolutely fascinated by.”

The Bob’s Burgers Movie is in UK cinemas now.